"All of warfare is based on pressing W." - Andrei "arT" Piovezan probably

Stylistically speaking, FURIA is arguably the most extreme of any team in the world. A hyper-aggressive team that takes the idea of space control to an entirely new level. At the centre of this aggression is arT, a player who takes entry-fragger and playmaker to new extremes. Alex Hawkins tweeted out that arT had the most entry attempts of any player throughout CS:GO.

Alex Hawkins
@hawka_cs
The T side opening kill stats show just how unique @arTpiovezan's hyper-aggressive playstyle is.
He attempts the entry in nearly 50% of the rounds on T side which is unprecedented throughout CSGO. 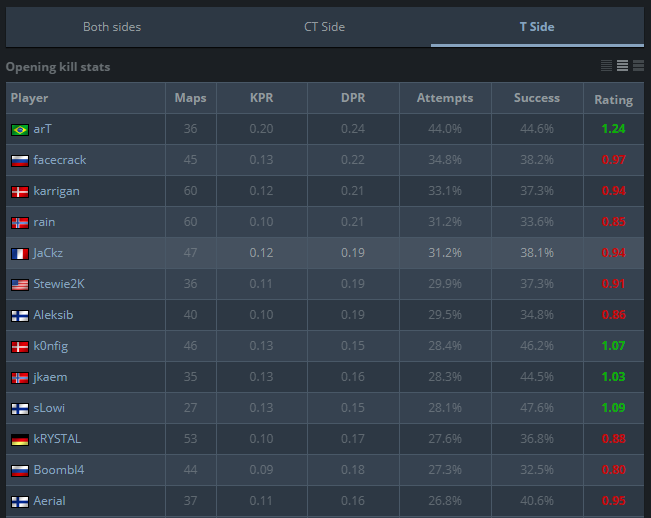 This style has often polarized the community as it can look gimmicky and heavily reliant on individual skill. However, the results speak for themselves. FURIA had their breakthrough in mid-2019 at DreamHack Dallas and ECS Season 7. It has been over a year since then and FURIA have not only retained their standing, but are now the best team in NA. Instead of embracing the more standard styles of play, FURIA have bet even harder on the War of arT.

To understand what makes arT's style so fascinating, we have to understand the background of FURIA's initial breakthrough in 2019. FURIA broke out into the international scene with two deep runs: a top 4 at DreamHack Dallas and 2nd at ECS Season 7 Finals. Their two biggest scalps were a bo3 victory against Vitality and a bo3 victory against Astralis. Their style and aggression was completely fresh and unique. It caught the other teams by surprise. Despite the initial success and fascinating style, experts tempered their expectations.

After all, we've seen plenty of tier 2 teams surprise elite squads in their initial breakthrough as the top teams hadn't studied their opponents yet. What's more, the inherent aggressiveness of the style looked volatile. Counter-Strike history tells us that such a style has a limited shelf life. That once the individual form runs out or once the top teams figure it out, the style and team start to wither away. Gabriel "FalleN" Toledo expressed this sentiment when he did an interview with TeaTime where he said "For the long run, they[FURIA] are going to have to learn how to play different styles."

To the critic's credit, they looked to be on the money by the end of 2019. After the first few months, FURIA's results started to drop off. They stopped getting deep runs and struggled in tier 2 events. FURIA lost in the group stages of EPL 10 Americas and got 5-6th at DreamHack Open Winter. However in 2020, FURIA are the most consistent team in the NA region and by general consensus the best team in NA. So what exactly changed?

Doubling Down on arT

Broadly speaking, nothing changed. FURIA did change a player in late 2019 as they swapped Henrique "HEN1" Teles in for Rinaldo "ableJ" Moda. Besides the boost in firepower, it also altered some roles as HEN1 and arT shared the AWP role. In terms of overall style and philosophy though, FURIA largely stayed the same. Instead of adapting to the standard meta, they doubled down on arT's aggressive style. Like Winston Churchill once said, "If you're going through hell, keep going."

FURIA made this succeed for a few reasons. First, they had the right pieces. Yuri "yuurih" Gomes and Kaike "KSCERATO" Cerato were both strong stars. HEN1 quickly became a third star and since entering 2020 has hit the highest peak of his career. In the past, HEN1 was a player you could count on to hit an extremely difficult shot 9/10 times, but miss the easy shot 5/10 times. In 2020, that flakiness has disappeared. HEN1 is not only a flamboyant AWPer who can hit hard shots, but a stable one that can solidify a position. In addition, his rifles are good and his aggressive sense is a perfect fit for the team.

HEN1’s introduction also freed up arT to do even more aggressive entry-style plays. In some ways, arT is similar to Jesper "JW" Wecksell. While both players were initially AWPers of their teams, the role they played was never the primary AWP. They were the wildcard player, the joker in the deck that the enemy team can't predict. In 2019, we saw JW resurrect his career and this was largely due to becoming a hybrid AWP/rifler player and embracing his wildcard role more than his AWPing persona. This opened up the potential avenues of aggression he could pursue without hurting the overarching framework of a setup.

I draw this parallel because the same applies to arT. His transition to a hybrid player has given FURIA more aggressive options and HEN1’s stable AWPing means that they don’t lose out on the fundamental stability of a tactical AWPer.

The difference though is that Fnatic used JW in a tertiary star role. In FURIA's case, arT is the heart and soul of FURIA. While yuurih, KSCERATO, and HEN1 are all better players than arT, the entire team's philosophy is polarized around arT's playstyle. This has only amplified as time has gone on.

More than Meets the Eye

I joked that for arT all of warfare is based on pressing W. A more succinct way of putting it is that arT created an entire style of war based around his hyper aggression. While people criticize the FURIA playstyle for being too aggressive and volatile, there is a level of genius to it that has largely gone underappreciated.

The first thing I noticed is that while FURIA don't play other styles that often, they do have a very strong understanding of how other teams play. One of the reasons why FURIA are so comfortable with playing an aggressive style is because they understand how rotations work in this game. ArT doesn't need to get the first kill to break open the round. In cases where arT dies, as long as he creates enough chaos and gets the info, FURIA are often able to convert that into a winning advantage somewhere else on the map. We see this most often FURIA's CT-side inferno where arT will often go for aggressive peeks at Banana and use that information to make the correct stacks on the A-site. On the T-side of Nuke, arT uses the same principle to force rotations and create openings for the rest of his players.

The second thing I've noticed is arT's (and by extension FURIA) increasing amount of potential aggressive plays he's added into his repertoire. I've seen him run nine different plays for an initial aggressive pick on both Mirage and Vertigo (both maps that FURIA specialize in). While everyone knows that arT is coming, no one has a counter that can stop all of the potential choices that arT can pull out at any time.

The third thing to consider is that arT's style of play gives confidence to his teammates to do the exact same thing. The other four players have bought into the arT style of play and this often results in more aggressive flanks, counters, and pushes compared to other teams. In the EG series at BLAST for instance, Vinicius "VINI" Figueiredo rushed up the B-stars of Vertigo and caught the second B-site player off guard as the first B player completely missed him. In a B execute, I saw KSCERATO run through a molly to flank the defending players at the back of the B-site.

Finally, what makes this style of play great is that it almost always lets FURIA dictate the pace of the matches. Their speed, aggression, and unity means that they are often in the tempo advantage.

Stopping FURIA and the War of arT

"In the midst of chaos, there is also opportunity." - Sun Tzu

While FURIA are the best team in NA, they aren't infallible. Gen.G beat them at the Road to Rio, MIBR/EG beat them at BLAST. When I looked through these games, the common denominator is stopping FURIA's aggression with the correct amount of force. If you commit too much to stopping arT's initial aggression, FURIA uses the ensuing chaos to get into a favourable situation or one where they have more experience playing in.

The key to stopping FURIA isn’t killing arT so much as killing arT and preventing the after-effects of his entry. A team can't let FURIA force a chaotic situation and abuse the subsequent rotations from his space-creation.

That is the problem with fighting FURIA and why despite having a year of experience, teams haven't found a way to snuff out FURIA's playstyle. The War of arT is more than just pressing W. It's the amount of plays arT has, the space he creates, the info he gets, the rotations he causes, the tactics he can play off of, and the spirit he empowers his team with. How arT does it in so many different faceted ways. That is the War of arT and his style has come to define this era of NA CS.