These Ultrakill tips are going to be important if you're taking on New Blood Interactive's character action, 90s shooter hybrid, where you descend into the layers of hell as robot protagonist V1. Even in its early access state, there is a lot to learn, and the game is quite punishing. However, it will reward you extensively for putting in the effort to master its mechanics, so here are our thirteen Ultrakill tips to help you get there. Ultrakill is inspired by character action games such as Devil May Cry and Bayonetta, so there is a style system built into the gameplay. Essentially, playing as stylishly as possible - which means utilising all the different mechanics and weapons, along with staying mobile and not being hit - will grant you a style rank and along with points that can be used in the terminal between missions. Playing this way will make your killing more efficient as a by-product, and the points are imperative to gain weapon variants. Ultrakill also happens to be inspired by first-person shooters of the 90s like Quake, so fast and constant movement is a must if you want to survive. Along with keeping your score up, constantly staying in motion will allow you to dodge enemies attacks, and you can easily die from a couple hits on harder difficulties. Enemies have a variety of attacks too: from mad dashing at you, to large explosives, and even hit scan - so there's a lot to dodge. The tag line of Ultrakill is "Mankind is dead. Blood is fuel. Hell is full." That second one is of particular importance and relates to this game's healing system. Similar to how glory kills gained you health in DOOM 2016, in this game, just interacting with blood will reward you health. Therefore, when you're low on health, even though you may feel like running, it's best to get in close and explode an enemy into a shower of blood, so you can rejuvenate. Sliding will help you dodge attacks, access certain areas, and earn you a style multiplier while in use, but it also can be abused to perform the slide spam. Due to gaining a speed boost at the beginning of a Slide, rapidly tapping the Slide button will increase your speed hugely, and will allow you to zoom through the tighter sections. Even the more adaptive enemies will struggle to hurt you during this, so make good use of it.

Ultrakill Tips: Use The Slam Jump To Gain Height There are many secret mechanics for players to discover because of the depth of Ultrakill's movement. One of the easiest to perform and most helpful is the slam jump. While in mid-air, holding the slide button will slam you downward, taking one energy bar and dealing damage. If you jump immediately after slamming though, you can gain lots of vertical height and speed, which can be chained together too. After learning the slam jump, the next logical step is the ground slam wall jump, which stores something called slam storage. Essentially if you perform the ground slam next to a wall and also wall jump in the middle of the manoeuvre, you keep your speed but store the damage of the slam attack away. Touching the ground will dispel it all instantly, but it allows you to be more mobile while doing the damage. An important mechanic to learn is the parry. Many enemy attacks can be parried, and an opportunity to perform one is signalled by a quick white flash from an enemy. It deals massive damage when timed correctly, and parries can be used against the smallest enemies and even bosses. Some attacks cannot be parried however, and these are indicated by a red flash instead. To parry, simply melee attack with the first variant of the arm as the white flash displays when an enemy attacks.

Ultrakill Tips: Shotgun And Parry For A Quick Explosion Staying on the subject of the parry, it can also be used in a rather unconventional way. If you use your Shotgun - which is the second weapon you collect in Ultrakill - by firing it and immediately following up with a parry, it will amplify the shot and send it towards enemies with a massive explosion and damage. Performing the move also gives you a style bonus called Projectile Boost.

Ultrakill Tips: Disable The PSX Settings To Begin With Ultrakill's art style is designed to be simple and also somewhat ape the low-poly graphical fidelity of 90s shooters. This aesthetic is amplified by the graphical settings that allow for downscaling, dithering, and texture warping just to name a few. In the graphics tab of the options menu, you can find a section for the PSX settings, and we recommend making sure they're all off to begin with. The game requires you to familiarise yourself with the enemy's animations and tells for certain attacks, and these can be hard to pick up on with the PSX settings on.

Ultrakill Tips: Learn The Mechanics Of The Coin Throw The second variant of the first revolver weapon allows you to toss a coin as an ability. You can toss four of them before the cooldown starts, and though as an ability it may not seem like much, it has a surprising amount of uses. Firstly, shooting the coin in mid-air will ricochet a bullet toward an enemy, but if you time it right by shooting the coin at the apex of its arc, the shot will split, causing two attacks. You can also punch the coin to send it toward an enemies weak spot, by walking backwards just as you throw. A key part of the movement in this game is wall jumping, where you can jump directly off a wall after colliding with it and pressing the jump key. You may tempted to use it a lot in the varied vertical environments of Ultrakill, and you should as it's helpful for climbing and evading attacks. However, you only get to wall jump three times before you need to touch a horizontal surface and reset the ability, so don't get caught out in the many bottomless pits littered around the levels of Ultrakill. As we previously mentioned, earning style is a large part of the game, and at the end of each level you are given an overall score with a grade based on a few aspects. The grade is rewarded on your overall completion time, amount of kills, and style score, along with whether you complete the optional challenge and collect the five orbs in a level. Doing these last two objectives help you to earn more points, and the highest level ranking, which is related to completion and even some secrets. 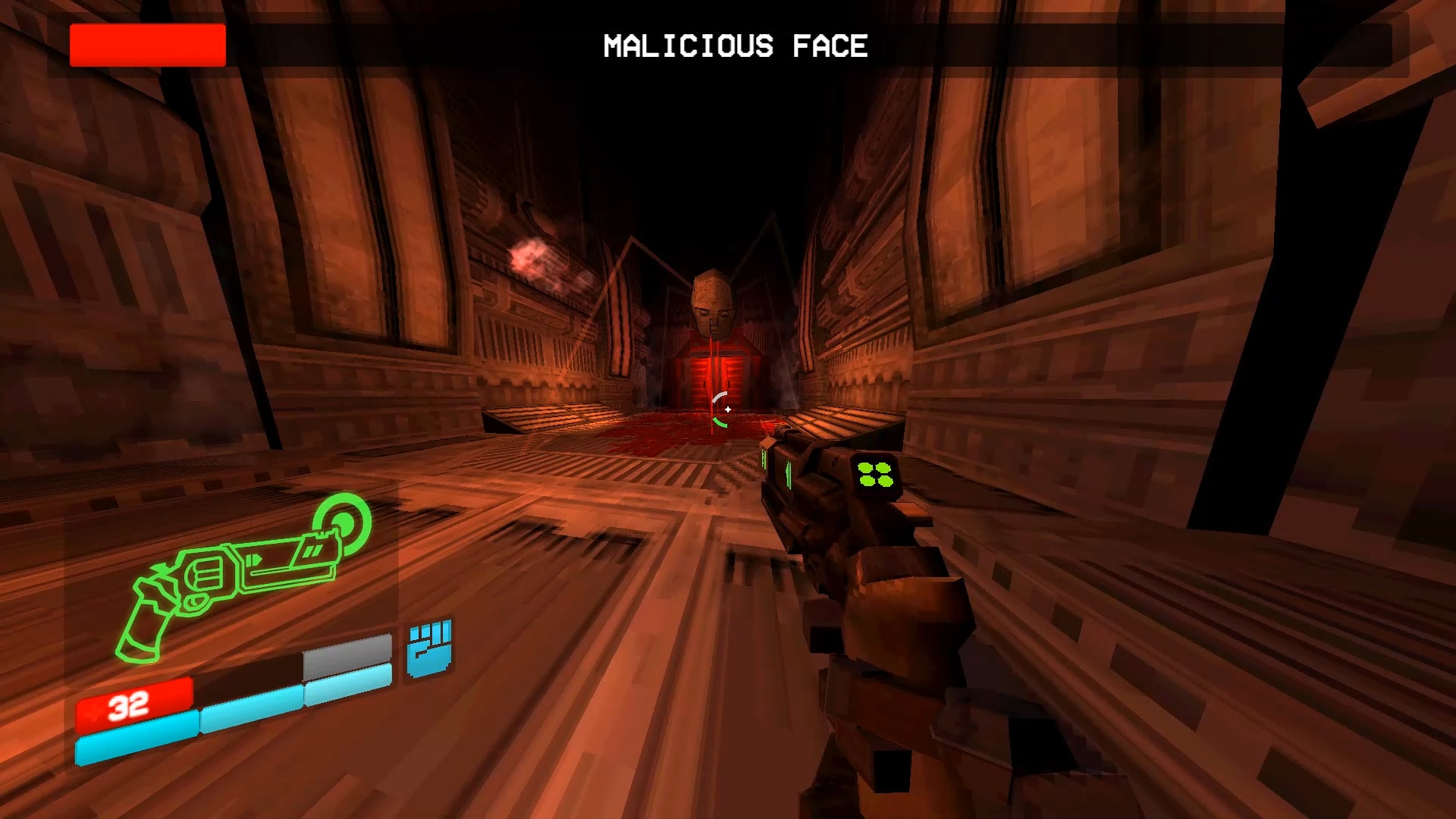 One of the seemingly most invincible enemies in Ultrakill that you'll fight early on as a boss, before appearing more regularly, is the Malicious Face. These floating stone heads take a lot of damage, but they some weakness. Firstly, the pure and consistent damage of the Nailgun can tear them to pieces over time, especially if you use the Attractor ability. Secondly, after taking enough damage, a large crack will appear on their model. At this point, a big enough explosion will insta-kill them, such as the Shotgun's Core Eject.

That's our list of Ultrakill tips, and now you should be ready to dodge and blast your way through the chapters currently available.