A Cloud Chamber job listing hints that BioShock 4 will the biggest game to grace the series - swapping Rapture and Columbia for a wholly open-world experience.

If you're ready to take a "dip" back into the expansive world of BioShock, a new tease for BioShock 4 has us even more excited for Cloud Chamber's upcoming fourth entry. 2K Games formally announced BioShock 4 will be handled by the new internal studio in 2019, and while things have gone typically quiet about what happens next, a CC job listing has finally hinted at an open-world BioShock game that could capitalise on the success of the Assassin's Creed, Fallout, and The Legend of Zelda: Breath of the Wild.

Following in the footsteps of the critically acclaimed original in 2007, BioShock 2 dived back into the underwater nightmare of Rapture. Things took an unexpected turn with BioShock Infinite in 2013, as we took to the skies and soared up to the floating city of Columbia. While it originally looked like Infinite was a million miles away from its predecessors, the game's finale and the Burial at Sea DLC brought the whole thing full circle. It's unclear where BioShock 4 will take the setting next, but by the sounds of it, the next entry will (unsurprisingly) be the biggest yet.

Will BioShock 4 be open-world? 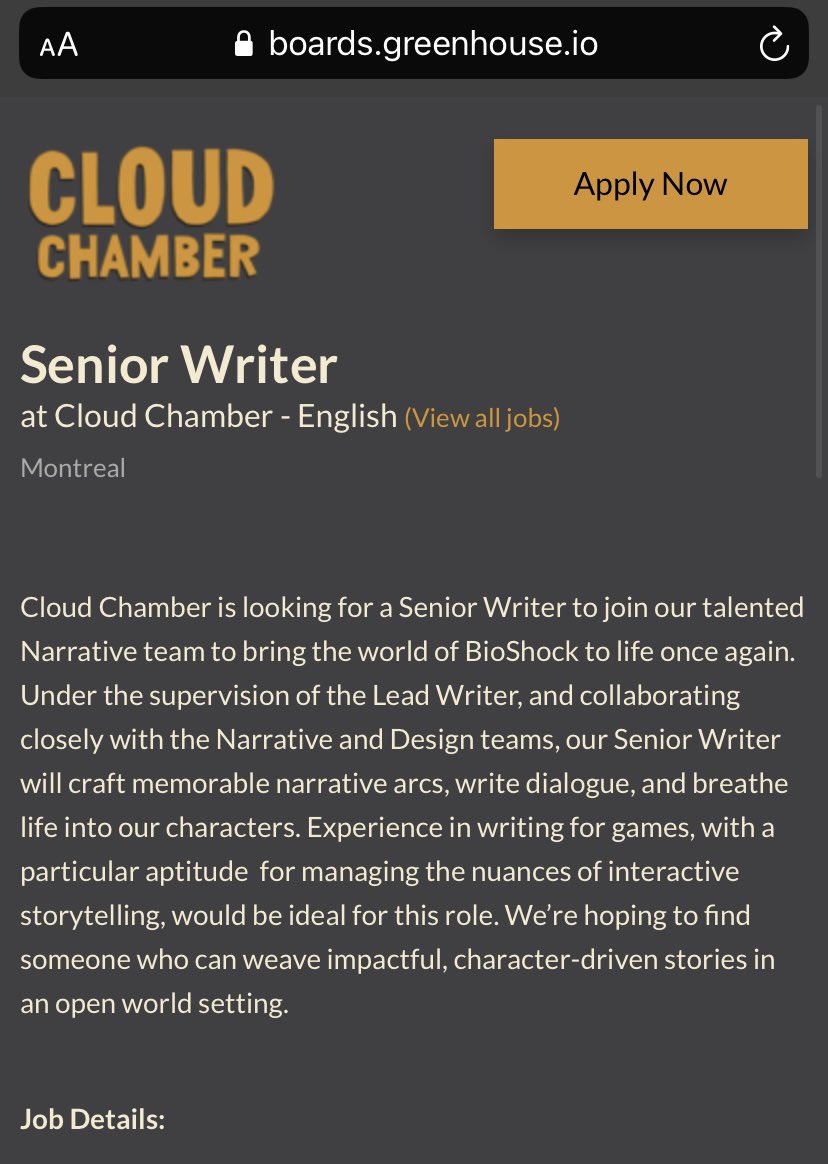 According to PCGamesN, Cloud Chamber is recruiting for the likes of an AI Programmer, UI/UX Designer, a Tools Programmer, Senior World Designer, Senior Technical Designer, and Senior Writer. In particular, the mention of a Senior Writer based in Montreal has sparked plenty of interest. The perfect person for the job needs to be someone "who can weave impactful, character-driven stories in an open world setting". If that wasn't enough, Cloud Chamber is also looking for a writer who will be "brainstorming primary and secondary mission content with the design” and helping in “the creation and execution of the core story including the writing of dialogue and other narrative elements as director".

Elsewhere, the role of AI Programmer needs to be filled by someone who can create an “urban crowd system" and “the systemic tribal ecology of a sometimes hostile AI". All of the above screams open-world gaming - adding fuel to the fire that BioShock 4 will be massive. The mention of secondary mission content is nothing new to BioShock. Those who looked hard enough were able to find a whole side mission hidden behind a button in BioShock Infinite's Salty Oyster bar. Still, the idea of adopting a wholly open-world game is a major tick in our books.

As for where BioShock 4 could be set, your guess is as good as ours. Although Columbia gave plenty of potential for a full-blown Infinite sequel, Rapture is where most players' hearts are. Then again, with two entries and a DLC already plumbing the depths of that doomed dystopia, how about something else? Considering BioShock is seen as a spiritual successor to the lauded System Shock franchise, why not take the story even higher than Columbia and blast off to space? Then again, the seemingly massive cosmos is pretty crowded right now. Alongside various System Shock remasters and a potential third game in the works, Bethesda is also working on the mysterious Starfield which is almost sure to be open-world.

The implications of an open-world BioShock 4 might alleviate complaints that it's been far too long since Infinite took flight. The site notes that games go through several iterations before settling on final plans, meaning an open-world setting could change. Then again, a feature as colossal as this sounds like it'd be pretty concrete by the time a developer starts hiring. Your guess is as good as ours when it comes to BioShock 4's setting. Thankfully, there's still a loyal legion of fans that can't wait to see where the acclaimed name goes next. Either way, BioShock 4 is sure to "shock" us all.