Finally some good news in regards to AAA studios releasing their blockbuster games in the near future. Blizzard Entertainment has announced the new release date for World of Warcraft’s expansion Shadowlands. The new release date is set for November 23, 2020. The pre-launch event date has also been announced and will take place from November 10 onward. The first raid will launch on December 8 with the opening of Castle Nathria.

The community had surprisingly reacted positively to the initial announcement of the delay of the WoW expansion which should've hit on October 27. A major reason for this had been, that players felt that the expansion was experiencing a lack of expected Blizzard polish and a couple of weeks of tweaking could provide a more fun experience. Some concerns in terms of the endgame (such as overhauling Maw rewards and combat experience) as well as the Covenant system that had felt a little flat have supposedly been addressed. Furthermore, Blizzard Entertainment thanked its player base and beta testers for their active participation in the game and its development.

World of Warcraft
@Warcraft
Enter the #Shadowlands on November 23. 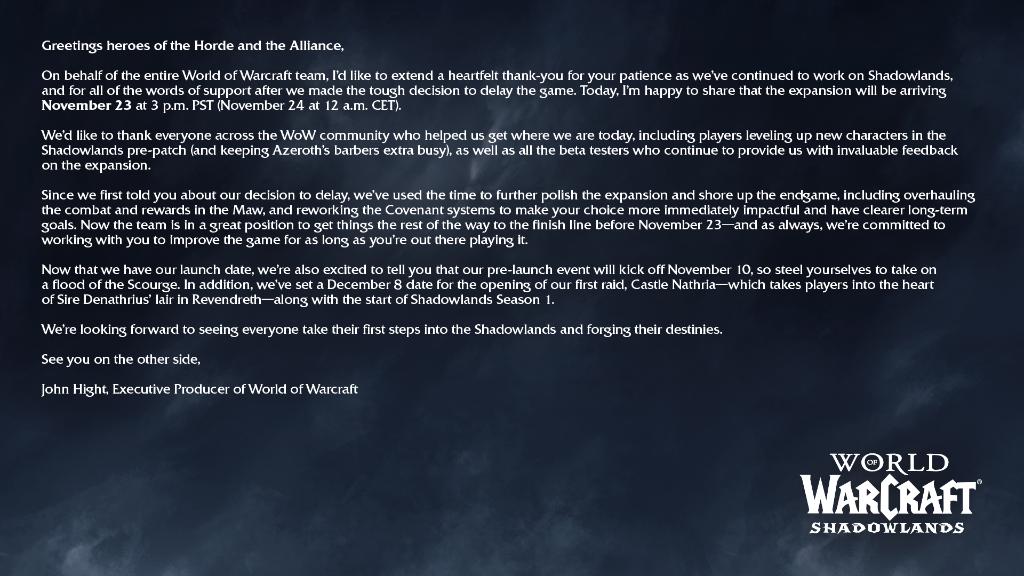 World of Warcraft is one of the most played Massive Multiplayer Online Role-Playing Games that had initially been released in 2004. Since then, seven expansion packs have been released, with Shadowlands scheduled to be the eight one players will get their hands on. For the rollout of the game, Blizzard had released several cinematic videos called the Afterlives series, focusing on several of the newly introduced parties as well as old trusted characters like Uther and Arthas finding their way back into the game.