Cheating is nothing new in esports, but especially not in Fortnite. Let's take a look at the most recent incident as well as the history of cheating in Fortnite.

Late on the evening of March 22, Twitter user DROXIDE posted a video full of clips in which four professional Fortnite players participate in some very suspicious activity. The duos of Kreo & Bucke and Keys & Slacke appear to be colluding in order to avoid Storm Surge. The community had mixed reactions. Some pros defended the two duos, while others called them out for blatantly cheating.

Cheating is nothing new in esports, but especially not in Fortnite. Let's take a look at this incident as well as the history of cheating in Fortnite.

These clips were taken from the Duos Fortnite Champion Series warmup tournament and Week 1 of the ongoing Duos FNCS. Kreo, Bucke, Keys and Slacke are seen taking potshots at each other outside of Slurpy Swamp every single game. These players would continually damage each other but never pushed to confirm kills. The theory is that this was done in an effort to surpass the Storm Surge threshold.

Storm Surge is a mechanic in Fortnite. When too many players survive into the later rounds — which happen often in these competitive matches — Storm Surge is activated. Storm Surge works to inflict immense damage on the players with the lowest damage output. The idea is to kill off players until the total players in the server levels off. This forces players to play semi-aggressive and make sure they are above the damage output threshold.

These two duos are accused of working together to bypass this mechanic. The “strategy” obviously benefited them. Keys & Slacke and Kreo & Bucke finished 1st and 2nd place respectively in the NA-East region.

Accused Player’s Response to the Claims

Bucke was quick to respond to the accusations. Bucke tweeted out:

“Everyone has their own storm surge routes/techniques. We know where people land due to maps that are made by third parties. If we have unlimited shield, the impact on our game that taking a bloom battle with another team is very minimal. Our loot route directs us to that one truck with the chest at it. By the time that they are done with their loot route, they end up at the slurp truck and we end up shooting each other since we cross paths. Even when other teams land at slurpy swamp, we bloom battle them because there's unlimited shield. There have been multiple times in scrims/tournaments where we kill each other because we'll get triple dinked or naded.”

Bucke is implying that because of the plethora of shields at Slurpy Swamps, he and Kreo had no worries about fighting early game. Additionally, they knew they would meet up with Keys and Slacke based on scrims and were prepared to fight. 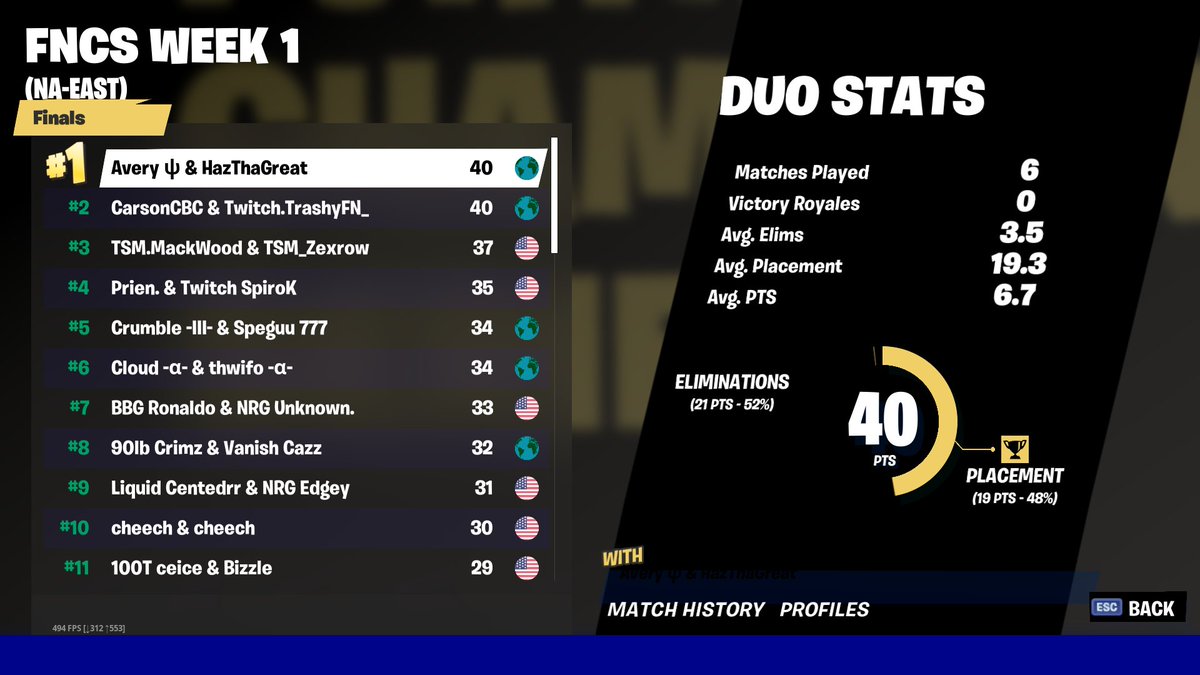 Both duos had their teams removed from the FNCS leaderboards. Also, each player received a 60-day ban from competitive play. This means that they will be unable to compete through the entire duration of the FNCS.

This punishment was met with controversy in the community. Some fans and other professional players like Clix and yung calculator thought that the punishment was far too harsh.

yung calculator
@yungcalc
guys they literally have killed eachother in scrims a fuck ton doing that, i dont think they teamed
43
2597

Clix
@ClixHimself
I don't feel like epic should've acted this fast, I feel like they didn't have a chance to even defend themselves. This 60 day ban is life changing for all of them. None of them are gonna be signed again, and there missing a whole FNCS. 60 day ban was not necessary whatsoever.
407
11683

Many others thought the punishment was warranted, and possibly even too light.

Myth
@TSM_Myth
Dont. Fucking. Cheat.
End of story, I dont understand how anyone can think any differently.
YOU ARE PROFESSIONAL PLAYERS. ACT LIKE IT.
3032
54210

Ryan Wyatt
@Fwiz
@ClixHimself There's an amazing alternative to a 60-day ban, and that's choosing not to cheat.
393
23937

Ninja chimed in and gave his opinion along with some thoughts on the inconsistent way Epic has dealt out cheating punishments in the past.

Ninja's opinion on the pro scene from r/FortniteCompetitive

In the video, Ninja mentions how FaZe Jarvis received a lifetime ban for using an aimbot in public matches but when players cheat with massive prize pools on the line, they receive a slap on the wrist.

History of Cheating in Competitive Fortnite

Epic Games is notorious for the way they inconsistently punish rule breakers. Back in the World Cup Qualifiers, Fortnite pros XXiF and ronaldo were fed free kills by their friends. This resulted in only a two-week ban. Afterwards, XXiF and ronaldo came right back and qualified for the World Cup once again. This guaranteed each of them tens of thousands of dollars. The punishment did little to deter cheating.

Other incidents of cheating have occurred at events such as the $250K USD Dreamhack Winter event back in 2019. Benjyfishy caught two players colluding during a VOD review. Both players were disqualified from the tournament shortly after the news broke.

Epic Games has no standard policy for how they treat these incidents. While cheating of all varieties is against their rules and terms of service, the way they enforce these policies varies on a case by case basis.

Who Else is Cheating?

Clips have now surfaced of Tfue and Chap calling out ahead of time that the players that land Slurpy Swamps cheat. They hint that it is a widespread issue and possibly involves more than a few players.

With this news, it is likely not the last time we will see teams cheat in Fortnite. The competitive Fortnite community consists largely of young kids. Kids don’t usually have the best judgment. Top that off with the gigantic prize pools, and you have a cesspool of cheating.

These aren’t just any players cheating either. These are players at the very peak of skill and fame. Kreo placed fourth in the Solos portion of the Fortnite World Cup and won over $1M USD.

Hopefully we see some more consistency from Epic down the line as they continue to do their best to maintain Fortnite’s competitive integrity.

Keep up to date with Fortnite news at GGRecon.