We interview Violet about what they are doing for Pride Month.

Members of the LGBTQ+ community within the gaming industry still state that they experience prejudice. Although there seems to be light at the end of the tunnel for those in the gaming and esports world, including streamers, casters, players, and fans.

Violet (AKA vibinwithviolet) is an Overwatch streamer for Houston Outlaws, but more than that, they are a vocal member of the LGBTQ+ community. Violet is non-binary and has some things to say to the Overwatch League. Violet has been an OW player since Beta but got into the community properly in Season 3.

We interview Violet about what they are doing for Pride Month, as an influencer and as a member of the LGBTQ community, and what they feel the OWL can do better to support those causes.

GGRecon: Tell us about your experiences as a queer person in gaming and in the Overwatch community.

I will start before I got with Outlaws, and that was a Path to Pro. I wanted to get interested in the competitive community of Overwatch just because esports was a fascination. So, I went into an open division team called Damage Inc, had an absolutely terrible experience with them - holy sh*t I’m glad they cut our contracts instead of waiting it out for the year. I mentally suffered from that team so much. I reached out to a personal friend (@fogiibear) and she was my backbone – without her, I don’t know what I would have done. And that contract is what got me Twitch Partner, and Twitch Partner is like a domino effect, I started getting all this attention, then I just sent out an email to Overwatch League teams, and while I was waiting for a response, I got on to a team. Back to the team - Damage Inc - there was a very very good staff member just put in a very sh*tty situation, that was also transgender, and whenever we were looking for members, players or streamers, because I wanted to get the homies to Partner, we encountered so many transphobic remarks, it was disgusting. They harassed & dismissed her for the fact she was transgender and didn't have a "female-identifying voice" (which brings attention to the fact that nobody is obligated to under-go voice training!).

Let’s go on to a positive experience, and that is when Outlaws responded to me, and Chris DeAppolonio, our ex-president, was the one to respond to my email, and our interactions were very professional and he never really asked questions about how I represent myself, it was more me saying what I want to do and him being on board with basically everything. And Chris introduced me to the rest of the team, gave me the names, I started talking, and man, the three most important people again that Houston Outlaws could have sent is flame, Chris, and Chad, they were amazing and I just can’t believe it. There were some nights that I stayed up because I was thinking “how could Overwatch staff care about me?” and I thought about that concept and how f*cked up that was. Overwatch League staff don’t necessarily do what it takes to reach out to communities [like LGBT] so whenever Chris did that it opened my eyes, like “wow, they actually care.”

They invited me out to the Homestand, and EVERYBODY on Houston Outlaws was excited to see me, the players, the staff, the fans (for some reason, I don’t know, I didn’t think it had gained that much traction that I was a streamer) I took a lot of pictures and signed a lot of stuff that day, and that experience just made me feel like a person.

I don’t see why Overwatch League teams, in general, can’t reach out to community members who are predominantly LGBTQ+, POC, anyone against the average stereotypical gamer and ask “hey what are your experiences, what could we do to help you” anything, just literally anything. I didn’t think Overwatch staff existed until I finally got on to a team, and I started DM-ing with no fear.

I want to praise my ex-superiors and ex-social media manager, flame, Chris and Chad. They’ve really been amazing, acceptance and welcoming-wise, and representation and actually caring – they are 100% the people that I would think of.

GGRecon: Have things gotten better or worse or stayed the same over time with the OWL when it comes to LGBT representation?

I really feel like it could change for the better. There are definitely teams out there like, let’s say, Spitfires, Shock, Valiant, teams such as that who spoke out whenever they made a post and references towards current events going on in the community. They’ve done it this time, they’ve done it in the past, it’s pretty good.

GGRecon: Tell me about the LGBTQ and POC charity events you’re setting up?

The events that I am planning, we are discussing that the dates are going to be the 29th to the 30th of June, but building up to the event is going to be a series of basically us reaching out to the community, the main idea of this is showcasing that the diversity is there in the Overwatch community and it’s on people to take up the mantle to bring that representation together.

It’s a GOATs tournament that we’re going to do (on July 2nd-3rd), and I had organisations reach out to me. I reached out to organisations, they were down, and they were Monkey Bubble, ELO Hell and Team Ireland.

The events that are going to be building up to the tournament are going to be charity streams, I am reaching out to LGBTQ+ and POC content creators within Overwatch who would take interest in promoting the charity, maybe with Twitch’s StreamWithPride event or maybe with something else. There’s no official confirmation of what charities we’re settling with, but that’s the main theme – supportive LGBTQ+/POC community members and trying to bring everyone together. We have a lot of content creators, streamers, artists, we have so much that we could offer to the community, just nobody cares to get it together.

The events we have so far are the GOATs tournament, and there is a pub quiz that Team Ireland would like to do. They have this team dog, and there’s some dog pride merch they’re going to release. It’s like a play on the D.Va logo, and proceeds will go towards local Ireland charities and the charity they recommended was BeLonG To. We have three charities right now, the Marsha P Johnson Institute, BeLonG To, and there’s the Twitch and The Trevor Project collaboration.

Throughout the entire duration of the month is a Call For Art, and I’m going to reach out to OWL artists to do emotes for Pride, that way everyone can use them.

I’m going to be reaching out to OWL artists and community artists, and my fiancé is an artist, I’m going to see if she wants to do anything to get the ball rolling, but we would put out art on social media with the hashtags.

Artists who would be down and would provide non-copyright art, we would put their artwork on merchandise where profits and proceeds would go towards charities. Maybe we could do a donation goal and that could count towards it. 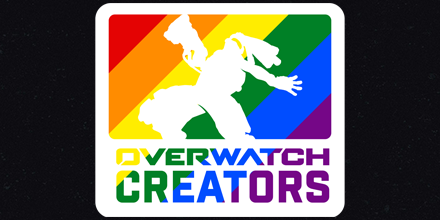 The next idea would be panels. We have plans to do panels, interview LGBTQ+ streamers, and maybe players.

GGRecon: How important is educating, not just the younger generation of gamers, but just everybody about homophobic and transphobic issues within the gaming community at large?

The panels are for sure going to be educational. We have a bi-erasure panel that Briggsy suggested that she talk about, and ideas such as this being presented to a community where it’s easily accessible, we have intentions of putting panels and interviews on to YouTube that way it can proceed past Pride Month because that was the majority of what people asked for, they wanted it to go longer than Pride Month, they wanted people to feel like they should go out and research. There was a bar graph [of Google Searches to do with LGBTQ issues] and it was July 3rd and it just to zero, a black hole, it went from so many interactions to not even over a thousand.

I made a Discord called Overwatch Creators and it has some of the Overwatch team in there, contenders, players, artists, and then just anyone who creates content, it’s not gatekept it’s “hey, do you stream overwatch? Do you have 20 followers? Pog, you’re welcome.” I want anyone to be able to feel accepted and able to talk about who they are without having to worry about “oh no I’m not this popular person so I’m not going to get a voice” that’s what this entire thing is, to give a platform to those who don’t have a following. I don’t want those with “louder” voices to reference the community when they’re not being helpful with either Pride or BLM.

It wasn’t until after a bad interaction with someone on Twitter with a following, that I actively started thinking about helping those without followings.

GGRecon: Do you think the Overwatch League and the gaming community at large need to make changes to be more inclusive, and give LGBTQ+ members of those communities’ safe spaces and support?

Yeah, and also I would like to add, stop pretending like nothing’s going on. When trans people go into voice chat, they talk for one sentence and they get d*cked on and they never join voice again. I myself lost interest in voice years ago since it became useless for comms and more so for harassment.

What I think the industry could do better is moderate staff and players, such as when it comes to the Cohesion/Scion Esports controversy, as their affiliation affects the team, and “thoughts are my own” in your bio does not make you immune to that. Overwatch is massively diverse, but only a piece has representation. When you don't show any interest in representing or defending your own community, there's not much sense of feeling welcome for your fans.

The main thing is just to understand that we [the LGBTQ+ community] are more than just a trend. We're a community within the Overwatch community that has been here and fought with problems from the start (most notably streamers not being held accountable.) Recently there are more & more voices building their own platforms, but that is only true for a very small portion and in no way represents the daily harassment those without followings receive. It's no wonder the disconnect between fans & interest in teams is a rising issue with less & less community engagement.

GGRecon: Tell me what Pride Month means to you.

I’ll say what I would LIKE Pride Month to mean currently. I would like this Pride Month to be THE Pride Month that opens people’s minds. Pride Month is wanting people to express who they are without having fear of judgement, and I don’t know what’s so wrong with that or why it's not actively participated in, there are so many [LGBTQ+] community members within gaming itself. So, I would want Pride Month this year to mean – having organisations and staff speaking out, I want people actively supporting the community. I really just want this Pride Month to be the one to change everyone’s point of view because silence is deafening.

The links for the Overwatch Creators Discord is here, and here is the all the info for the Call For Art.