The Elder Scrolls V is now nine years old, and with ES6 merely teased, when will we receive the fabled new game in the illustrious series?

Look, I’m not going to beat around the bush here – The Elder Scrolls V: Skyrim is one of the greatest games ever made: period. And I can back this up with facts.

With 30 million units sold worldwide (multi-platform) since release, it makes it into the Top 20 best-selling games of all time. This paired with shining reviews from IGN (9.5/10) and Wired (10/10) amongst others, almost makes up for the myriad of technical issues that plagued the game on release. Let’s be honest though, the glitches are funny, merely a minor inconvenience, and only add to the quintessential “Skyrimness” of the title.

The open-world role-playing game (RPG) Skyrim regularly makes it into online “lists of the greatest games of all time” – as it should.

I still play Skyrim to this day. On PC, on console, on VR, on Nintendo Switch, on my Samsung Smart Fridge (that last one isn’t real… yet) but even though I will defend the Dragonborn until the day I ascend through the gates of Sovngarde - enough is enough. I need more. Namely - Skyrim 2 (or The Elder Scrolls VI: Redfall as it is reportedly titled).

If you love Skyrim so much, why don’t you marry it?

Sorry, my heart belongs to Serana. But, for real, what’s so great about Skyrim? Is it the rolling breath-taking landscapes, the immersive heart-stopping quests, or the ever-present fear that you might kill a chicken by accident? It’s all that and more.

Skyrim allows you to enter a mystical world, inhabited by lizard-people, wizards, and even evil Orphanage owners, and become the ultimate hero; The Dragonborn. Obviously, the main quest (spoiler alert?) is to follow your destiny and birthright to defeat the god-tier dragon Alduin and save the world. At the same time, it falls to you, random person who appeared out of thin air and almost ended up headless in Helgen, to negotiate on behalf of Tamriel in the middle of an all-out war between the rebel Stormcloaks and the Imperials. Phew, I just came here to have a good time and do some enchanting, and I’m feeling very attacked right now.

The pressure is on for you as the protagonist, but the best part is – you don’t even HAVE to do it. You can swan around completing side quests if you so wish; go drinking and end up engaged, plant a magic tree, find some Crimson Nirnroot (fun!), kill Nazeem for disrespecting you for the last time (tell me ONE MORE TIME about the Cloud District, I dare you), go crazy!

The vast lore that encapsulates all of Skyrim (and the Elder Scrolls titles at large) is so deep it needs a rebreather. Understanding all of the complicated aspects of the politics, economy and religions of Skyrim takes years (and several hundred hours of YouTube video watching) before you even scratch the surface.

Skyrim also, in my humble opinion, one-upped its predecessor titles by a big margin. Oblivion and Morrowind came before Skyrim, and laid the perfect foundation, but never quite matched the presence of The Elder Scrolls V, or the gameplay. Now, I don’t want to rain on the parade of those Morrowind and Oblivion stans – they’re good games, but they’re a product of their time. The storytelling and graphics that came with Skyrim, couldn’t have been achieved in the times that came before. To be honest, Skyrim itself is lagging behind newer titles due to those same reasons…

Thank Talos For The Mod Community

Skyrim’s modding community deserves ALL the props. But also, perhaps some of the blame for the delay with The Elder Scrolls VI.

The mod community holds Skyrim together by the skin of its teeth by keeping it playable, whether that’s new texture packs, weather mods, or even new quests. And of course, the Marriable Serana mod (thank you). Because modders are helping Skyrim keep up with the latest graphics trends, despite the game being nine years old, it keeps the game from starting to look ugly and stale, and therefore keeps pulling players back into its addictive grip.

No word of a lie, without mods keeping Skyrim looking fresh, I may have stopped playing a few years ago. But the fact that I can easily apply a few mods to make the game more responsive and prettier, is invaluable.

Let’s get down to brass tacks here. Todd Howard, where is Elder Scrolls VI? Howard has been involved in the production, design and direction of The Elder Scrolls series since 1996, and was the director of Skyrim, so I think it’s fair to direct this question at Toddy boy himself. So far, Elder Scrolls fans have been left chomping at the bit after only being fed nibbles of info about ES6 over the past few years, and I think I have a few ideas why so little information is out there.

What we know about The Elder Scrolls VI is scarce, even the name is still a mystery, with phrases like “Valenwood” and “Redfall” being thrown around on forums due to the few pieces of the puzzle we have.

It’s been over two years since the “official trailer” for Elder Scrolls VI was released and described as “currently in pre-production at Bethesda Game Studios”.

Boy, was my cold dead Argonian heart racing when I watched that, believing (naively) that something big was coming, and soon. But there were to be another gruelling twelve months to endure before a new glimpse into Tamriel was revealed.

Touted as a “massive leap” from ES5 to ES6, this may explain somewhat why Bethesda appears to be taking their sweet time.

A video from ESO tells us that Elder Scrolls VI looks to be set in Redguard-occupied Hammerfell, with face-scanning captures being used to set the facial graphics apart from previous titles with realistic photogrammetry and photo geometry technology. This tech is also being used to scan in real-world assets, with a view to making ES6 the most lifelike title in the series yet.

This realism and attention to detail workload could be the main reason (and probably is) for this agonising wait.

Todd Howard’s talking heads in the video have led some to believe that Bethesda are building a new game engine, specifically to create ES6. Again, that is going to take some serious man-hours.

The development cycle is long and arduous, as proven by Bethesda’s Fallout 76, when you decide to create a new engine.

There is another caveat here that I believe is what could be to blame for the delay in producing The Elder Scrolls VI – next-gen consoles. If it is to be believed that this brand-spanking-new and unbelievable tech is going into the game, the consoles of today are simply not going to be able to handle it. The dawn of the next-gen (PS5 and Xbox Series X) could be the jumpstart Bethesda are waiting for, cables in hand.

Who needs to make a new title, when the old one still sells? Skyrim reportedly sold 3.4 million retail copies in its first 48 hours of existence, and to date has generated $1.39 billion. Phew, that could buy a LOT of cheese wheels.

The game’s subsequent release on Nintendo Switch also garnered even more success, breathing yet more life into the title.

And then this appeared. 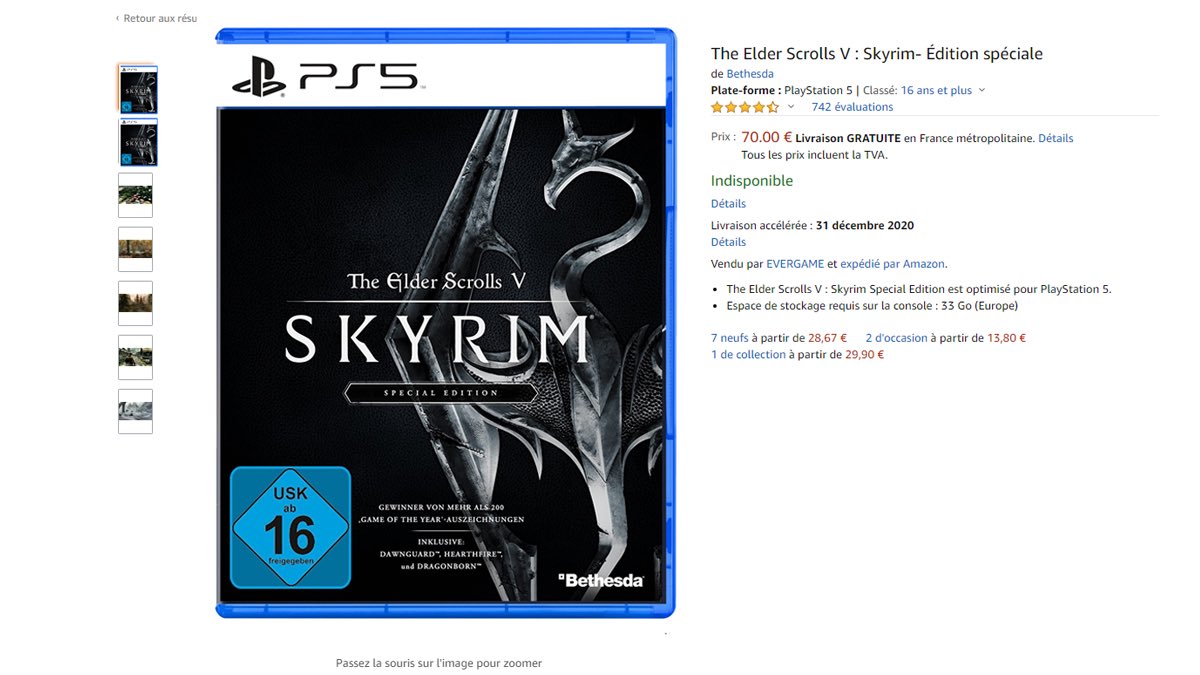 Recently busted and found to be a hoax, it was all too believable that Todd Howard would port the game to PS5, instead of giving the long-suffering fanbase a new game to play.

Bethesda are busy bees, and no game seems to keep them more occupied than Elder Scrolls Online. The MMORPG has so many DLCs for developers to work on, it’s easy to see why ES6 may be falling to the wayside. Slaving away in their coding dungeons, comforted only by the wafting sound of “The Dragonborn Comes” entering their ears which Todd keeps on a constant loop to “improve morale” – also, unlimited sweet rolls!

Since ESO’s release in 2014, it’s received four new chapters (or DLCs) to sink our adventurous teeth into, and while that’s all fine and good, and no one enjoys trekking around the Alik’r Desert more than me, I’m slightly ticked off at the constant development that appears to be put into ESO, that I feel would be better used elsewhere.

Another cog in the delay machine is Bethesda’s upcoming sci-fi title Starfield. Described by Toddy himself as “a brand-new, next-generation, single-player game. This one is in an all-new epic franchise. Our first wholly original franchise in 25 years”, at E3 in 2018. Howard then slipped us the goods, muttering under his breath that "the game after [Starfield], and it's the one you keep asking about” would be Elder Scrolls VI, revealing the title screen behind him.

For the last few years, Starfield has been at the forefront of Bethesda’s mind, but with the game moved into post-production earlier this year, ES6 could be next on the agenda.

Even after playing the incredible breath-taking life-changing game that is Skyrim multiple times (and for hundreds of hours) - I still learn new things about it every day and every playthrough. For example, only in my latest game did I finally get to witness the infamous Headless Horseman for myself - and it was truly spectacular.

So, Todd Howard, from the bottom of my heart. Just give us Elder Scrolls VI. Please.