#TWITCHBLACKOUT hopes to get the attention of Twitch CEO Emmett Shear.

#TWITCHBLACKOUT is trending on Twitter, as streamers urge others to withhold from streaming and viewing broadcasts for the entirety of Wednesday, June 24. This call to action was prompted by a recent slew of sexual abuse allegations against Twitch streamers and is an act of solidarity for the alleged victims of said abuse.

Those involved with #TWITCHBLACKOUT hope to get the attention of Twitch CEO Emmett Shear, in an effort to spark more action against members accused of sexual misconduct.

Troopah 👑
@troopahs
Hello 👋
Today I will NOT be streaming. As most of may already know, there is a protest against Twitch for the way they handle racism, sexual harassment, sexism and abuse on the website. Their lack of action is a part of the problem that needs to be solved.
#TwitchBlackout
5
14

The Twitch community is divided on the blackout movement, with some saying they will still be using the platform today to spread awareness, while others choosing not to be part of #TWITCHBLACKOUT for financial reasons.

This news comes just days after the surprise demise of streaming platform Mixer, and several streamers careers are already in upheaval.

Banlish
@Banlish
I said this on the channel yesterday and I'll repeat it here: I do believe in the #twitchblackout and what it stands for. I however cannot stop for a number of reasons, and while I hate to admit it, I am the only bread winner in my house atm and this month hurt us badly 1/
0
16

The movement has been organised to shine a light on the recent and overwhelming number of accusations of sexual abuse, harassment and misconduct that have been revealed by the victims themselves on Twitter and other social media websites.

The call to Twitch CEO Emmett Shear to do more has promoted a response from Twitch already, in the form of a statement on Twitter.

We take accusations of sexual harassment and misconduct extremely seriously. We are actively looking into the accounts concerning streamers affiliated with Twitch and will work with law enforcement where applicable. 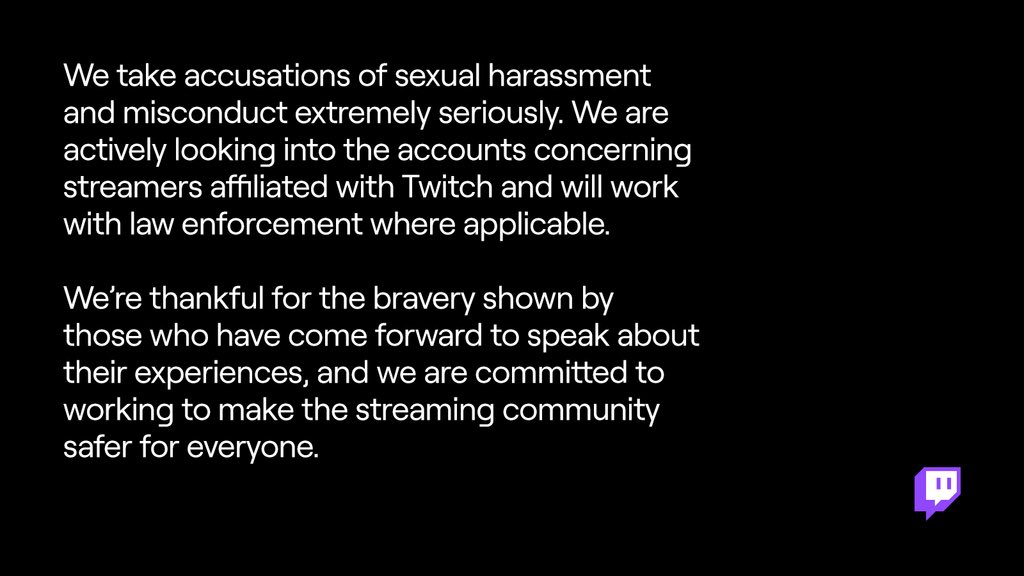 Some streamers and viewers aren't happy with this statement, and urge the #TWITCHBLACKOUT boycott to go ahead.

Twitch has responded to the #TWITCHBLACKOUT movement with a statement titled "An Update To Our Community'.

We are reviewing each case that has come to light as quickly as possible, while ensuring appropriate due diligence as we assess these serious allegations.

The full statement can be read here.

Latest Gaming News
More
News
Ninja YouTube Live-Stream Signals Potential Signing
After Mixer's demise, Fortnite superstar streamer Ninja appeared to have no new platform to call [ ... ]
News
Nairo Let Go From NRG Esports
Nairoby 'Nairo' Quezada, a pro Super Smash Bros player has been dropped by NRG following sexual [ ... ]
News
Ubisoft Rumoured to be Releasing FPS Battle Royale 'Hyper Scape'
Updated 02/07/2020 Ubisoft is reportedly due to announce their new FPS Battle Royale title named 'Hyper [ ... ]
News
All the Most Exciting Summer Updates for Animal Crossing: New...
Get ready to soak up all the fun of Summer on your personal island paradise in the first Summer update [ ... ]
News
Everything You Need to Know About Pokémon Unite
Nintendo has announced its new 5v5 battle game – Pokémon Unite. Described as a “strategic [ ... ]
News
Recap: PS5 'The Future of Gaming' Event: Game Demos & Console...
The PlayStation 5 event 'The Future of Gaming' on June 11 revealed new titles, new gameplay, [ ... ]
News
What Games Can We Expect to See at the PS5 Event?
The PlayStation 5 launch event “The Future of Gaming” has been confirmed for June 11, after [ ... ]
News
PlayStation 5 “The Future of Gaming” Event Date Leaked
The PlayStation 5 event was due to take place on June 4 but was postponed in an announcement from [ ... ]
News
Amazon Game Studios 'Crucible' Retires Two Game Modes Just Weeks...
Amazon Game Studios’ hero shooter, Crucible, launched on May 20, 2020, on Steam, but [ ... ]
News
Lamborghini Announces 'The Real Race' Tournament - And You Can...
Lamborghini is launching their first foray into esports with the virtual event 'The Real Race' [ ... ]
News
The Elder Scrolls Online is Coming to Stadia
Bethesda and Google have teamed up to bring The Elder Scrolls Online (TESOnline) to the Stadia gaming [ ... ]
News
Borderlands: The Handsome Collection Available for Free on the...
Borderlands: The Handsome Collection is available to download for free on the Epic Games Store. The [ ... ]
News
Kairos Esports & LG Electronics Team Up to Launch LG Gaming
In a recent tweet, LG announced that it now has a dedicated esports presence. LG Electronics UK recently [ ... ]
News
All of the Epic Games Free Weekly Games Coming Soon
The Epic Games Store is giving away one free game a week for the whole of 2020, no purchase necessary! [ ... ]
News
GTA VI Will Not Release This Year
In crushing news for Grand Theft Auto fans, who were expecting the next instalment this year, publishers [ ... ]
Esports Calendar
This website uses cookies
Cookies help us and our partners provide statistics. By browsing this website, you consent to the use of cookies in accordance with our Privacy Policy and Cookies Policy.
Accept & Close