Pokefans are in for a treat with this Pichu phone charger that juices your phone with the adorable Pokemon's cheeks.

'Cause the power, you're supplying, it's electrifying. 2021 is a huge year for Pokemon as the gaming goliath officially turns 25. It's sometimes hard to believe it's been a whole quarter-century since Pokemon Red and Green first took the Japan gaming scene by storm. Since then, we've seen those adorable Pocket Monsters take the world by storm with the rosy-cheeked Pikachu lording it over us all as the company's mascot.

To celebrate this momentous occasion, one fan has created a Pichu phone charger that promises to juice your phone in style as the pre-volution version of Pikachu. When you're bored of shopping for giant Pokemon plushies or a Genar bed with 5-and-a-half foot tongue, why not opt for something a little more practical?

While custom Pokemon Game Boys and Joy-Cons are nothing new, one Poke-crazy Pokefan has put their skills to the test with this Pichu phone charger and a lump of clay.

What is the Pichu phone charger?

Posting on YouTube, Nendo Yoshirin shared their Pokeperfect Pokemon charger. Building around one of the new Apple MagSafe Chargers for the iPhone 12, Yoshirin has turned Pichu's cheeks into a handy charger. It looks like it's modelled on the spiky-eared Pichu, who popped up as an event for Pokemon Heart Gold and Soul Silver. We were already sold by just looking at its adorable face, but if that wasn't enough, Pokemon composer, director, and producer Junichi Masuda shared the make on Twitter and gushed about how amazing it looked.

We don't know which our favourite bit of the Pichu charger is, but probably the fact it looks like the tiny tot is cuddling the mobile phone against its chubby cheek. Before you ask how much though, this pint-sized Pichu is just a prototype and isn't for sale. If you want to see what else Yoshirin has been working on, their social channels are full of similar Pokemon builds that turn some of the franchise's most iconic monsters into everyday items.

Can you buy the Pichu charger? 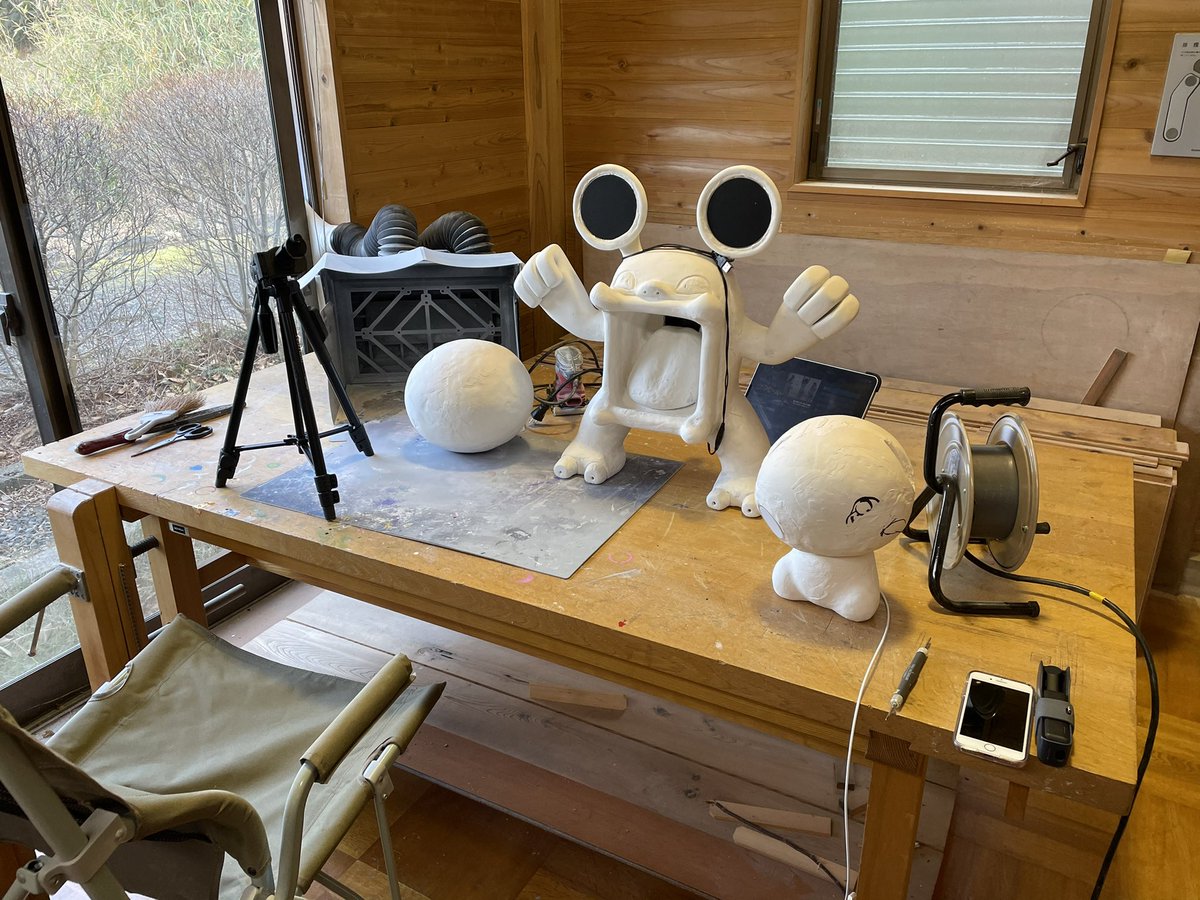 If this sparky little addition isn't enough for you, how about Loudred speakers or an Oddish planter? The clue is in Yoshirin's channel being called Clay Yoshirin, but still, we're super-impressed with their work when it comes to turning inanimate lumps of clay into lifelike Pokemon that look like real-world versions of the gang.

With Masuda also spotting their talent, who knows what the future holds of Yoshirin? In general, this year is set to be massive for Pokemon merch. We've already seen an official announcement that the OG Pokemon Trading Card Game will be getting a reprint in a supersized form, while the craze of adding Pokemon Cards to Happy Meals has caused no end of trouble for McDonald's with scalpers.

There are plenty of Pokemon announcements expected alongside the 25th anniversary, and we're still holding out hope Pokemon Diamond and Pearl will be getting a next-gen facelift. Sadly, we're left imagining how cute the Pichu charger would look in our homes. We'd be sure to pika-pick up one of these if they were actually able to buy.

LATEST GAMING NEWS
More
General News
Portal Reloaded Introduces Third Portal That Lets You Travel...
It's been a whole decade since we first leapt through the portals for Valve's Portal 2. [ ... ]
General News
EA Announces New Battlefield Mobile Game Set For 2022 Release
EA has announced that Battlefield is officially coming to mobile. It will be a joint project between [ ... ]
General News
Resident Evil 4 Fans React To VR Remake
Mr. Salazar will see you now. After months of rumours and speculation, it's time to pack your bags [ ... ]
General News
Assassin's Creed Is Getting A Mr Men Crossover
While we all know Mr. Bump, Mr. Greedy, Mr. Tickle, and Little Miss Sunshine, what about Mr. Ezio, Little [ ... ]
General News
Esports Fashion Week Announced For 2021
A brand-new esports event has been announced - Esports Fashion Week.  The event plans to bring the [ ... ]
General News
Red Dead Online Player Spots Back To The Future Easter Egg
Controllers, where we're going, we don't need controllers. While the world of video games is [ ... ]
General News
CourageJD Wins $100,000 In Bitcoin After 100T Uno Tournament
Esports is growing at an astronomical rate, with the ever-growing list of titles getting more diverse [ ... ]
General News
Set Pictures Confirm Knuckles Is Coming To Sonic The Hedgehog...
Sony has its fans in a "spin", as players and movie fanatics alike get ready for Sonic [ ... ]
General News
Discord Has Reportedly Ended Talks With Microsoft
Microsoft's hopes of world domination have hit a speed bump, as talks between the gaming giant and [ ... ]
General News
The Last Of Us Part II DLC Has 'Been Shelved'
If the brutal world of Naughty Dog's The Last of Us wasn't already grim enough, it [ ... ]
General News
Assassin's Creed: Black Flag Is Getting A Sequel
Ya'har mateys, Ubisoft is getting ready to set sail with a sequel to Assassin's Creed IV: [ ... ]
General News
Buy Games At Full Price If You Want A Sequel, Says Days Gone...
The director of Days Gone has given some pretty strong opinions about sequels, and buying games [ ... ]
General News
Sony Is Giving Away Horizon Zero Dawn For Free
"Aloy, Aloy", what's going on here then? While we sit twiddling our controllers and wait [ ... ]
General News
PS3 And PS Vita Stores Are Remaining Open After Sony Backtracks...
It's a big win for the little man, as Sony listens to outraged PlayStation 3 and PlayStation Vita [ ... ]
General News
Amazon Has Cancelled Long-Awaited Lord Of The Rings Game
The Lord of the Rings game by Amazon Game Studios has been cancelled, two years after it was announced.  [ ... ]
General News
Marvel's Spider-Man 2 Fans Excited Over Venom Rumour
Insomniac Games is preparing to swing down across the New York City skyline all over again with Marvel's [ ... ]
General News
xQc Has Been Banned From GTA RP NoPixel Server For The Fourth...
Just when you thought a new leaf had been turned and Felix "xQc" was riding high on the straight [ ... ]
General News
Battlefield 6 Plot Has Reportedly 'Leaked Online'
DICE is rolling out the big guns with the upcoming release of Battlefield 6. With the sixth main [ ... ]
General News
Uncharted And Ghost Of Tsushima Movies Coming To Netflix
Netflix is continuing its streaming service domination and has just nabbed the rights to both the Uncharted and Ghost [ ... ]
General News
You Can Play Zelda: Ocarina Of Time In Wind Waker
Sometimes, some things just belong together - begging the question of why it didn't happen sooner. [ ... ]
General News
Ghost Of Tsushima Devs Tease 'Spectacular Multiplayer Game'
Sucker Punch Productions isn't wasting any time in capitalising on its success from Ghost [ ... ]
General News
Assassin's Creed Writer Teases Valhalla Sequel Setting
The Assassins and the Templar Order are once again ready to cross swords when Ubisoft eventually delivers [ ... ]
General News
BioShock 4 Job Listing Teases Open-World Game
If you're ready to take a "dip" back into the expansive world of BioShock, a new [ ... ]
General News
Next-Gen GoldenEye 007 Remake Could Be On The Way
We find ourselves shaken (and stirred) by the latest revelations that a next-gen remake of GoldenEye [ ... ]
General News
TimeSplitters 4 Teased After 16-Year Break
It could be "time" to hop back into the TimeSplitters franchise. Some 16 years after [ ... ]
General News
Three Games Have Been Removed From Xbox Game Pass
Three games have been removed from the Xbox Game Pass, but luckily there's been some great additions.  [ ... ]
General News
The Last Of Us Series Casts Agents Of S.H.I.E.L.D. Star As Tommy
We've not quite heard the "last" of The Last of Us news. With filming on HBO's [ ... ]
General News
Resident Evil Chapter Announced For Dead By Daylight
It's been a big week for crossovers, and after Rick and Morty (bizarrely) came to Rainbow [ ... ]
General News
Outriders Inventory Wipe Fix Just Made The Game Worse For Players
While most of us continue to enjoy People Can Fly's Outriders, the Destiny-inspired shooter [ ... ]
General News
Wife Auctions Husband's $190,000 Yu-Gi-Oh! Collection For Cheating
Whether it's using a Call of Duty: Warzone stim glitch or having it off with someone else [ ... ]
Esports Calendar
rocket league
RLCS X Spring: The Grid (NA)
It's North American's turn to score points for qualification to the World Championship. Matchday 5 - Round 1
rocket league
RLCS X Spring: The Grid (NA)
It's North American's turn to score points for qualification to the World Championship. Matchday 5 - Round 3
overwatch
2021 Overwatch League
Blizzard's OWL is back for the 2021 season! West Group
overwatch
2021 Overwatch League
Blizzard's OWL is back for the 2021 season! East Group
overwatch
2021 Overwatch League
Blizzard's OWL is back for the 2021 season! East Group
overwatch
2021 Overwatch League
Blizzard's OWL is back for the 2021 season! East Group
valorant
VALORANT Champions Tour
VCT 2021 features three levels of competition -Challengers, Masters, and Champions. Challengers is a regional competition and winners will qualify for the Masters. Korea Stage 2 Challengers - Decider Match
This website uses cookies
Cookies help us and our partners provide statistics. By browsing this website, you consent to the use of cookies in accordance with our Privacy Policy and Cookies Policy.
Accept & Close