The Pokemon series has always been one of Nintendo’s greatest franchises, with fans across the world falling in love with its gameplay, style and cute critters instantly. But for some, it’s missing something. And that something, according to game developers Pocketpair, is assault rifles.

Pocketpair has debuted the trailer for their upcoming game Palworld, a ‘brand-new, multiplayer, open-world survival crafting game where you can befriend mysterious creatures called Pal in a vast world’. The game has turned a lot of heads by looking much like a Pokemon clone, except with one major difference - the game’s hyperviolent gameplay. 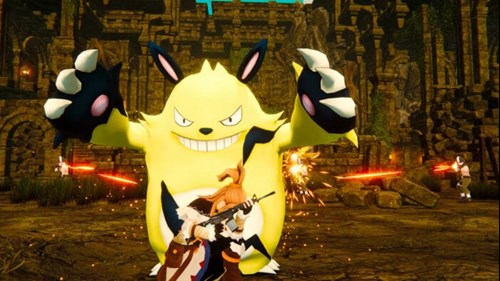 The trailer sees players riddle others with assault rifles, use cute Pals as meat shields and throw electric creatures into lakes to kill swathes of fish. It also goes heavy on the game’s jovial critiques of animal slavery, by showing sequences of creatures working in weapon production factories and pushing cogs in acts of manual labour.

Pocketpair have made similar titles before, most notably Craftopia, a game that is presented as a mish-mash of RPG, building, farming and simulator games already existing. Fans are calling them into question now with their brash take on the Pokemon universe, despite the appearance of Pokemon-esque mechanics in that game too.

You can collect and raise mysterious creatures "Pal" in this next-generation open-world survival crafting game!

The game is incredibly shocking (not just down to the electric fish murder), and has pushed a lot of buttons among Pokemon fans.

Some fans of Pokemon have taken a great deal of offense due to the trailer, attacking its willingness to copy the Pokemon Series, and engagement in hyperviolence.

WHY GUNS? LMAO. I KEAM COOL BUT GUNS? IN A POKEMON STYLE GAME? Everything looks cozy, and fun, and whimsical, then the automatic weapons come out. It's J A R R I N G.

Fans are upset with the game and are recognising it as a Pokemon rip-off with a sprinkling of shock factor. It’s certainly not a good look for Nintendo - but knowing them, we imagine it’s nothing a cease-and-desist letter won’t change.