TT games has confirmed that Lego Star Wars: The Skywalker Saga has been delayed indefinitely, with the action game facing an uncertain future.

To paraphrase Obi-Wan Kenobi, "This is not the news you're looking for". The upcoming release of Lego Star Wars: The Skywalker Saga has hit a Death Star-sized problem and been blown apart like Alderaan. Although the nine-episode saga was supposed to be combined in one giant game for the first time ever, Warner Bros. Interactive and Traveller's Tales Games have delayed the adorable adventure title indefinitely. That's right, you won't be hopping behind the controls of the Millennium Flacon and blasting off to the galaxy far, far away anytime soon.

These days, Lego Star Wars is a staple of the gaming scene. Alongside Lego Batman and Lego Harry Potter, it's been a lucrative money spinner for Traveller's Tales Games. Back in 2005, TT released Lego Star Wars: The Video Game as a well-timed adaptation of George Lucas' prequel movies. This was followed by Lego Star Wars II: The Original Trilogy just a year later, then Lego Star Wars: The Complete Saga in 2007. Of course, this wasn't the end of the sci-fi favourite on the silver screen, meaning Disney's sequel trilogy has opened up a whole new corner of the galaxy for Lego Star Wars games. Lego Star Wars: The Skywalker Saga was supposed to bring all nine movies together in style.

Why has Lego Star Wars: The Skywalker Saga been delayed?

TT Games
@TTGames
Thanks to all our fans for your continued patience. 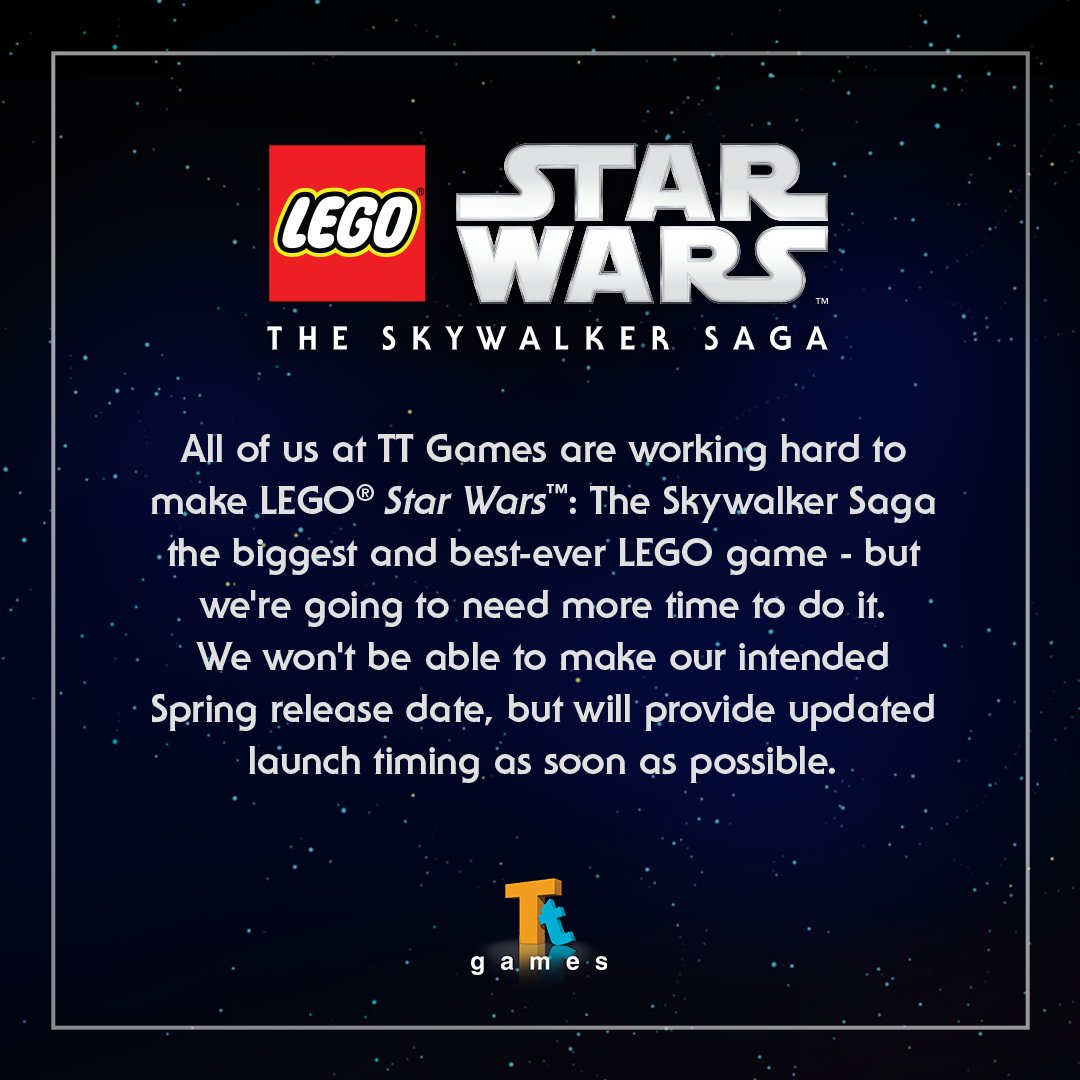 Posting on Twitter, TT Games explained, "We won’t be able to make our intended Spring release date". It's a double blow because not only was The Skywalker Saga delayed from its original 2020 release, but now, it has no launch window at all. Even though we can't imagine TT Games will scrap the whole game, stranger things have happened, so who knows? Added to this, the fact Lucasfilm Games has risen from the ashes of Mustafar means all Star Wars games are set to fall under one giant umbrella.

Considering this was rightly billed as "the biggest and best-ever LEGO game", it's easy to see why fans are disappointed. In response to TT's tweet, there was an outpouring of concerned players. One wrote, "I understand you delay a game once, but a second time, I’m less respectful of that. Put a realistic date. If you need just time to polish okay fine, if its another 5 months, than you’ve known for some time spring 21 is not happening. Shameful". Another sniped, "This insane i pre-ordered this game in November last year and its stupid you guys can't make the spring 2021 launch window. I bet you will say holiday 2021 and then delay again until spring 2022 if that happens you should just cancel the game".

Not everyone was quite as polite. A disgruntled gamer wrote, "How hard is it to make a f*****g lego game?". Someone simply wrote the sentence "Don't let it be a Cyberpunk fiasco" over and over again - in reference to CD Projekt Red's troubled Cyberpunk 2077. The game was repeatedly delayed and eventually released late last year to a critical panning and complaints it was still rushed. We're praying Lego Star Wars: The Skywalker Saga isn't heading down a similar path.

When will you be able to play Lego Star Wars: The Skywalker Saga?

Unfortunately, TT hasn't expanded on why Lego Star Wars: The Skywalker Saga has been delayed or when we can expect an update. The Skywalker Saga was first announced in 2019 and was heading for a hopeful release of 2020 thanks to a trailer released on the official Star Wars YouTube. However, last year, a new trailer shown during Gamescom Opening Night Live gave the tentative release of "Spring 2021". Since then, any mention of an actual release year has been pulled, which has led to the latest announcement.

We have to give developers a bit of a break, especially considering we're still in the midst of a global pandemic. Major titles like Far Cry 6, Outriders, and the upcoming (and untitled) Rainbow Six game have all been struck by delays. TT Games hasn't actually said COVID-19 is to blame, but it's a not-so-hard guess. Let's hope Lego Star Wars: The Skywalker Saga gets a new release "Windu" soon!