One clever modder has created GameCube Joy-Con controllers to bring the nostalgia of the noughties' console to the Nintendo Switch.

Consider our retro dreams realised as one plucky player has recreated the iconic GameCube controller in Joy-Con form. That's right, now you can recapture those days of hovering over Delfino Plaza in Super Mario Sunshine on that big purple box, but with all the updated fun of the Nintendo Switch. Even though the GameCube might not be the most imaginative or aesthetically pleasing console Nintendo has ever released, gamers would recognise a GameCube controller anywhere thanks to its standout colouring.

Released in 2001, the GameCube had the monumental task of succeeding the Nintendo 64. It was a tall order that the console never quite hit, as it trailed behind the N64's 33 million units sold with just 22 million. Although the sales were impressive enough, it still put the GameCube behind other sixth-gen systems like Microsoft's Xbox (24 million), and a million miles away from Sony's PlayStation 2 (155 million).

Despite its middling success and slipping somewhat into the realms of forgotten Nintendo consoles - we're looking at you Wii U - who could forget amazing GameCube games like Luigi's Mansion, The Legends of Zelda: The Wind Waker, and Super Smash Bros. Melee? While we wait for Mario to get off his backside and put GameCube games on the Switch, we can at least swap out the console's signature Joy-Cons for the GameCube's wireless WaveBird.

How do you make GameCube Joy-Con controllers?

Since the Switch came out, gamers have been tinkering with the idea of how classic controllers could be adapted to fit the next-gen system. Modding Joy-Cons is nothing new, but taking it one step further, Shank Mods has gone full Dr Frankenstein and butchered a WaveBird controller to make a pair of fully-functioning Joy-Cons.

The full video shows exactly how it was done, but here it is in a nutshell. Shank split a WaveBird controller shell down the middle and secured rail attachments from the OG Joy-Cons with custom 3D-printed components. The WaveBird's triggers and thumbsticks were adapted for more modern upgrades like clickable joysticks, while additional buttons for plus, minus, Home, and screenshot had to be drilled. According to Shank, the hardest part was working the wiring to match the Joy-Con circuits to the GameCube buttons. Thanks to the Joy-Con's sophisticated hardware, it proved to be a minor stumbling block.

Shank can't take all the credit though. It was a collaborative effort as GameCube controller expert BassLine cut some sections, while YouTuber Madmorda helped with custom Joy-Con buttons and giving the signature purple paint job. All in all, it's a pretty impressive piece of engineering. As you can see, it runs Switch games just like a normal Joy-Con would.

Can you buy GameCube Joy-Con controllers?

Steve Kim
@Fobwashed
When will @NintendoAmerica
give gamers what they want? 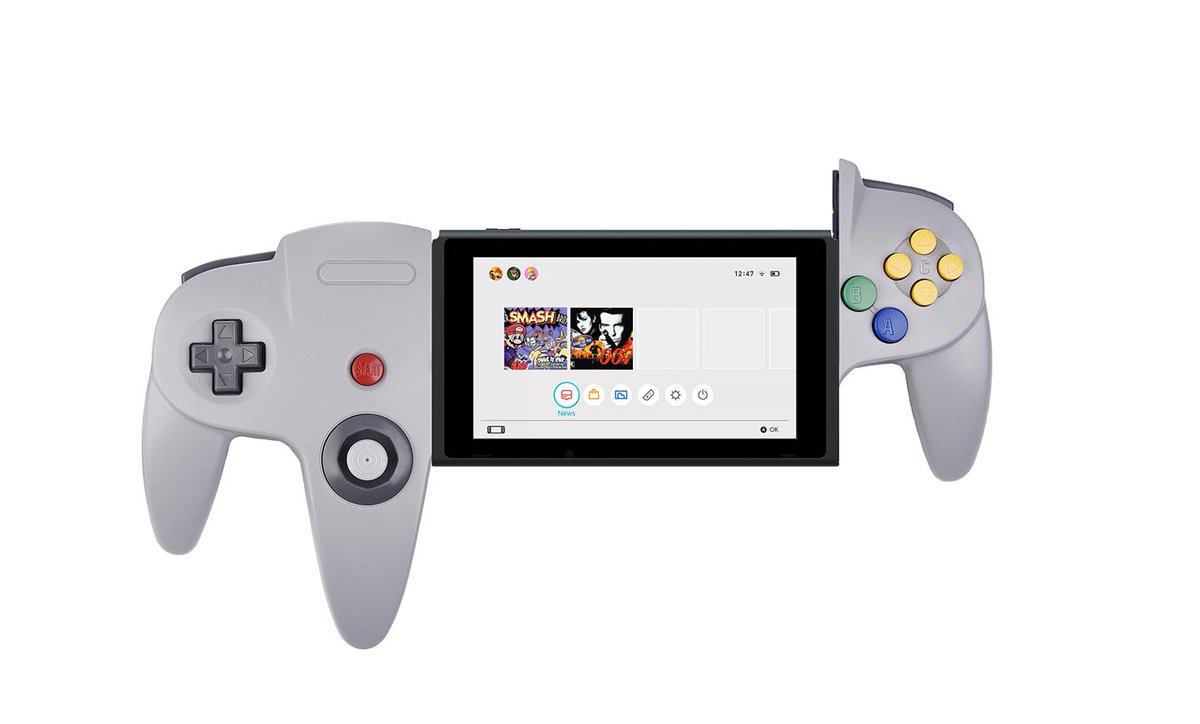 Impressively, the fact Shank used the OG Joy-Con hardware means the controllers have all the usual Switch functions of HD Rumble, Amiibo support, and gyroscopic aiming. Better yet, they're combined with the familiar feel of a GameCube gamepad to send us back to the '00s. As a final cherry on top, there's a central grip piece, so you can put the two halves back together like a classic GameCube controller while making use of the Joy-Con's capabilities as a single controller.

There are plenty of inventive third-party Joy-Con controllers out there, but unfortunately, Shank's GameCube Joy-Con controllers aren't for sale. Worse than this, the video explains they're simply too hard to make at home unless you're something of an expert yourself. Well, that sounds like a challenge to us. For now, we're left imagining what they'd be like to handle. Here's hoping Nintendo will see this and think what a great idea it would be to cash in on our retro obsession. The challenge now stands, when will Shank pick up the gauntlet and turn an N64 controller into a Joy-Con?