The legal battle is set to really take off on May 3.

The legal battle between Epic Games and Apple rages on, with the final court date slowly approaching. The trial officially kicks off on May 3 (at 8.30am PST) and is expected to last for around three weeks. The legal defence for both parties is getting ready for the trial, releasing information to the public along the way.

GOLDEN
@imgoldenyt
the epic games vs. apple final trial starting may 3rd has been scheduled to last around 3 weeks, going from 11AM EST to 6:15PM EST monday-friday
34
781

Despite the initial takedown of the Epic Games store taking place over eight months ago, the legal battle only just starting to heat up. Both Apple and Epic Games have been researching the background of the case, each coming up with their statements in the process. The two companies have been reviewing one anothers' revenue, trying to present facts that respond to the overall lawsuit.

Since the case is a bench trial, there will be no jury. This fact indicates that the two will have to present in front of the court and each other, as no jury will be present to provide public insight. For this reason, many people are sceptical that the case will turn out in the way the public wants it to transpire. Many believe that Epic Games has won in terms of public opinion, but the actual winner of the case is still uncertain.

The case's bench trial status is why fans of both companies have been tuning in to find out what has been uncovered before the trial. With both companies providing plenty of details about their competition, the courtroom is set to be heated on May 3. 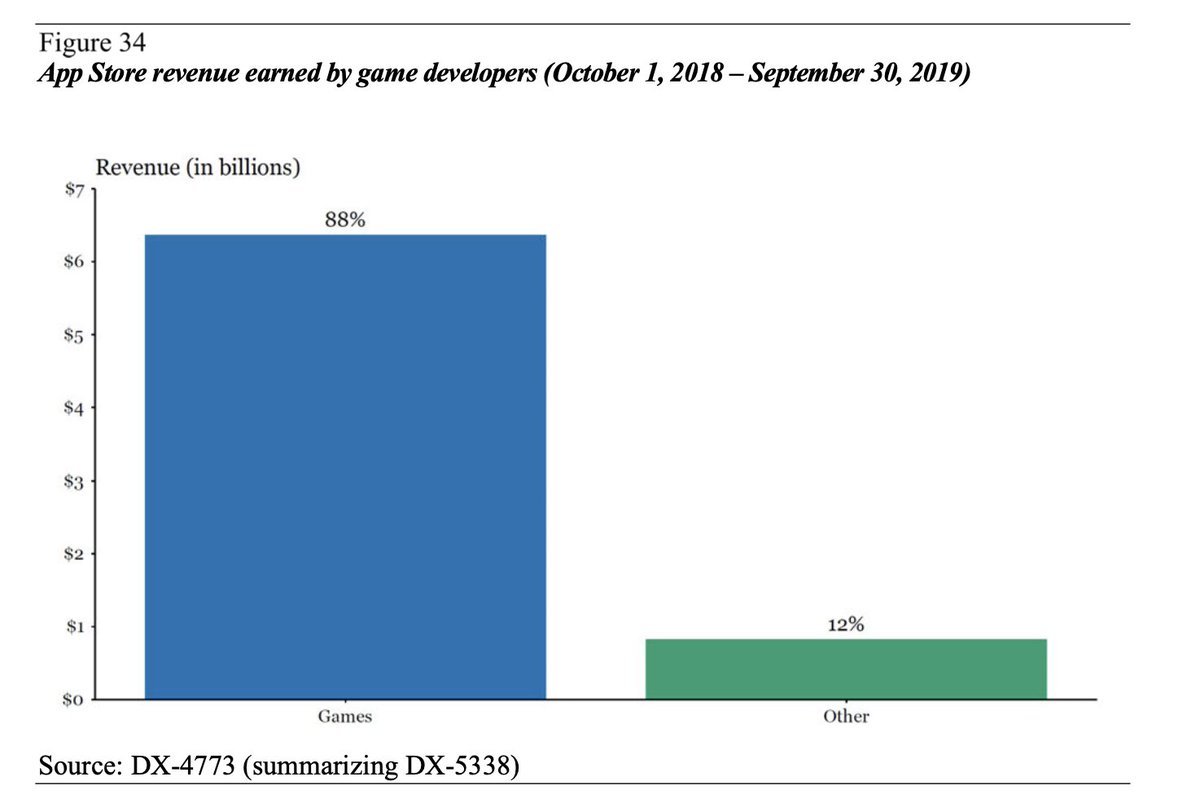 Apple has released revenue statements showcasing Epic Games' "meagre" presence amongst other game development giants, such as Tencent and Sony. They also argued that Epic Games only made a small portion of its income off of iOS. Epic Games' revenue from Fortnite was shown to only be around 7%, which Apple attempted to argue was not enough to claim anti-trust.

Epic Games didn't appreciate this personal attack on their company's status in the gaming industry, which is why they did their research on Apple. This research proved to be extremely eye-opening about Apple's presence in the market.

Tim Cook, Chief Executive of Apple, claimed that Apple was not a dominant force in any market. This claim was quickly debunked by Epic Games, which showed that iOS had a 40% share of the smartphone market in 2019. Epic Games also highlighted that Apple had 56% of the revenue share for expensive smartphones, classified as any smartphone that is over $300 in tag price.

Benedict Evans
@benedictevans
And the switch from paid to IAP. 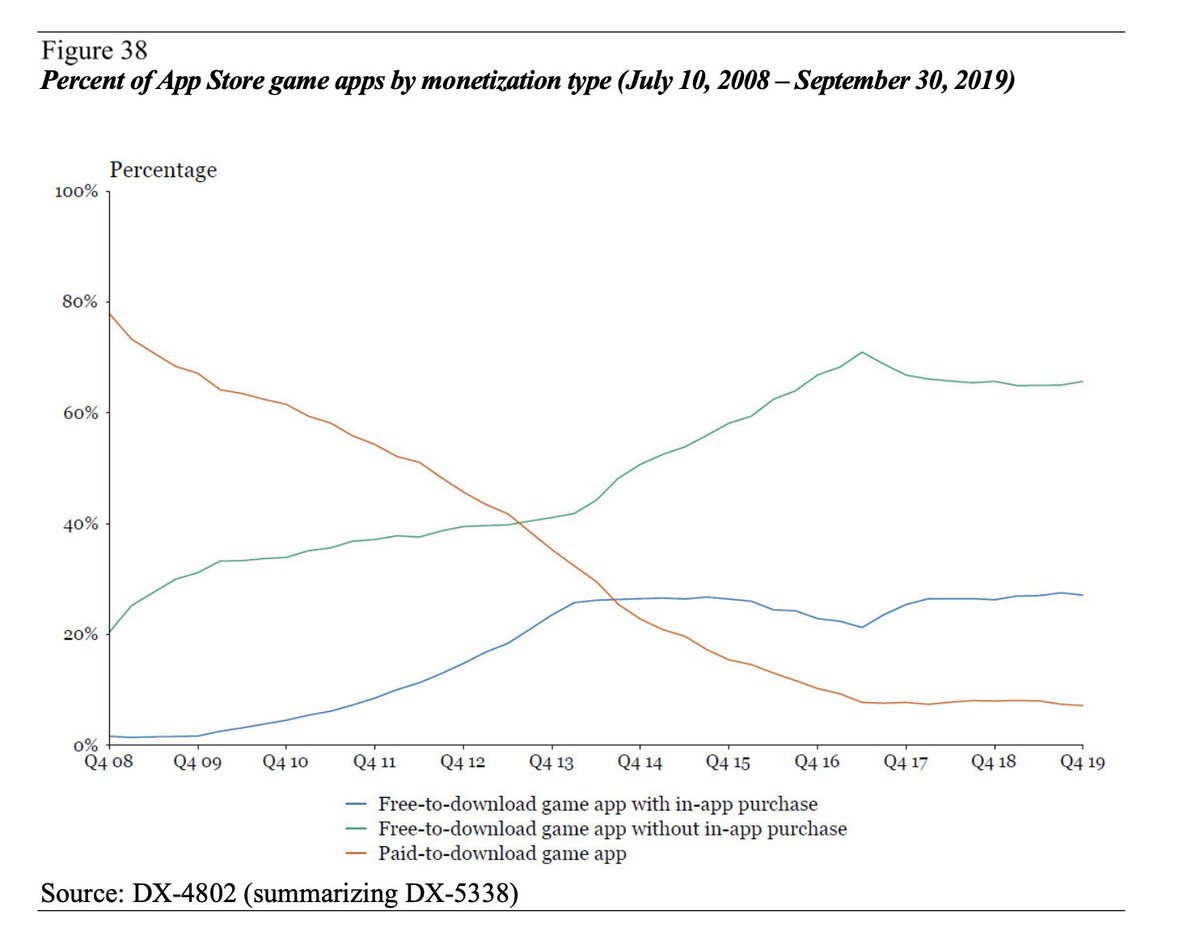 This insight into Apple's percentage of the market share proved that the smartphone manufacturer did have sway in the mobile scene. They even tried to enter the Android scene in 2013, attempting to push their iMessage app out across Android devices, which are owned by Google (Alphabet Inc.). This plan never came to fruition, but Epic Games still brought it up as a significant event in their case.

Tim Sweeney, CEO of Epic Games, does not take issue with Apple's products, but he does take issue with its infiltration of the mobile gaming scene. The dominance of the App Store and its squandering of competitors and smaller developers has created a monopoly in the mobile market. It has prevented smaller developers from releasing their products into the world, as competitors are immediately squashed.

Evan Nikolich
@EvanNikolich
Back in 1991 when @TimSweeneyEpic founded Epic Games, I wonder if in his wildest dreams they would locking horns with companies like Apple and Google, and be front page of @WSJ business section.
Has to be hell of journey and story ðŸ˜€ 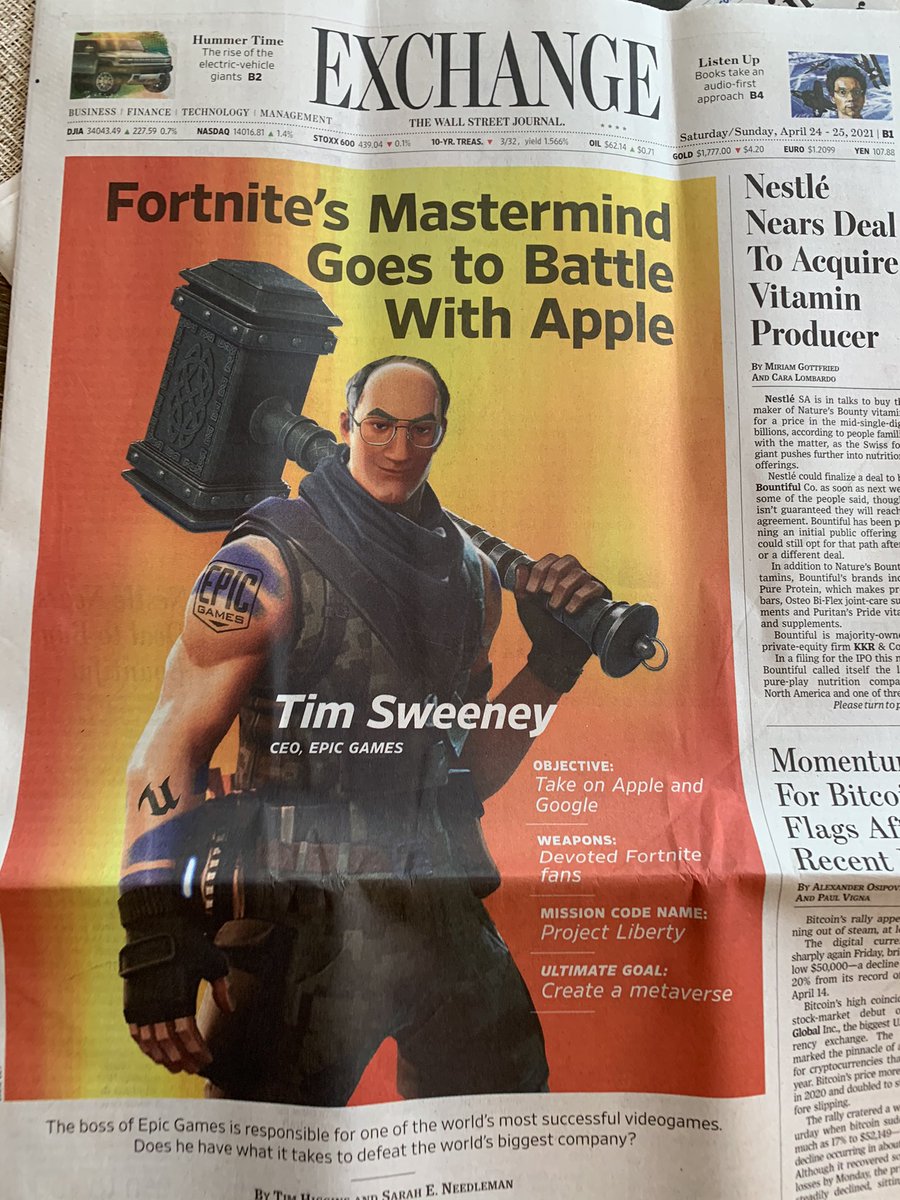 Epic Games argues that Apple's rules and App Store fees drive the life out of the mobile development community. In the mobile scene, the strongest can't always survive; in fact, they usually don't. Apple's App Store is littered with what Epic Games describes as "arbitrary rules" that keep competition out and send most of the profit to Apple.

Apple's App Store and locked-down iOS are what Epic Games has targeted their lawsuit on, as these entities pose a threat to the average developer. Epic Games argues that this case is necessary, as most of the time, developers are too small to face off against Apple. If the company decides to take a smaller developer's product down, they have no choice but to comply.

In this lawsuit, the Epic Game Store was a necessary sacrifice for the potential greater good of the mobile development scene. Epic Games could have moved on from the takedown, removing themselves entirely from the App Store. Instead, they chose to sue the technology giant, as they felt that they were unfairly treated by the App Store's laundry list of rules.

Jack Nicas
@jacknicas
Apple is being sued by Epic Games, the maker of Fortnite, which argues that Apple unfairly forces app makers to hand over 30% of their sales.
Apple has countered that Epic is not some sympathetic app developer; it's worth nearly $30 billion!
That's what Apple sells in a month.
5
44

Epic Games believes that developers shouldn't have to give Apple 30% of their revenue to remain on the App Store. 30% is a considerable portion of a development team's earnings, which forces them to drive up prices of their in-game services. Ultimately, Epic Games believes that this hurts consumers the most, who have to pay more than their peers on the Android Play Store to receive their in-game benefits.

The general gaming public is relatively divided on Epic Games' stance in this court case. Many believe that Epic is correct in their pursuit of the case, while others are on Apple's side. Despite these mixed opinions, the gaming community as a whole is anxiously anticipating the court case.

The case will bring more insight into both companies, providing gamers relevant information about Epic Games and Apple. This case could spiral into further pushbacks against industry trusts, especially those in the digital market. Last year, Epic Games created the Coalition for App Fairness, which has grown a lot in the past seven months. Epic Games is now joined by Spotify, Basecamp, Deezer, and News Media Europe. Other companies are joining forces with Epic Games, hoping to create a market that is open to competition and fair for all developers.

With so many conversations about anti-trust laws in video games starting to take off, many gamers await the May 3 trial in anticipation. While cameras will not be allowed in the courtroom, there will undoubtedly be plenty of activity on social media. Gamers are keeping close tabs on this legendary case, as the results could send shockwaves through the gaming community.