The dream pairing of Animal Crossing and DOOM has finally been acknowledged by Bethesda as it ships a relationship between Doom Guy and Isabelle.

If you'd struggle to see how the cuddly critters of Animal Crossing and alien-blasting bloodbath of DOOM could ever come together, you'd better believe it's happening. No, there isn't an Animal Crossing mod that puts a pint-sized version of Doom Guy in Tom Nook's world of penny-pinching holiday packages. However, as both Animal Crossing: New Horizons and DOOM Eternal get ready to celebrate their one-year anniversary, Bethesda is finally acknowledging THAT the two are connected.

Although both New Horizons and Eternal had the same release date of March 20, 2020, the dream pairing of DOOM's masked Doom Guy and Animal Crossing's cheerful Shih Tzu started back in 2019 when both games announced they'd be sharing a birthday. Fanart of Doom Guy and Isabelle started doing the rounds online, and keen to make the most of this blossoming romance, Bethesda is shipping this unconventional couple.

How are DOOM Guy and Isabelle connected? 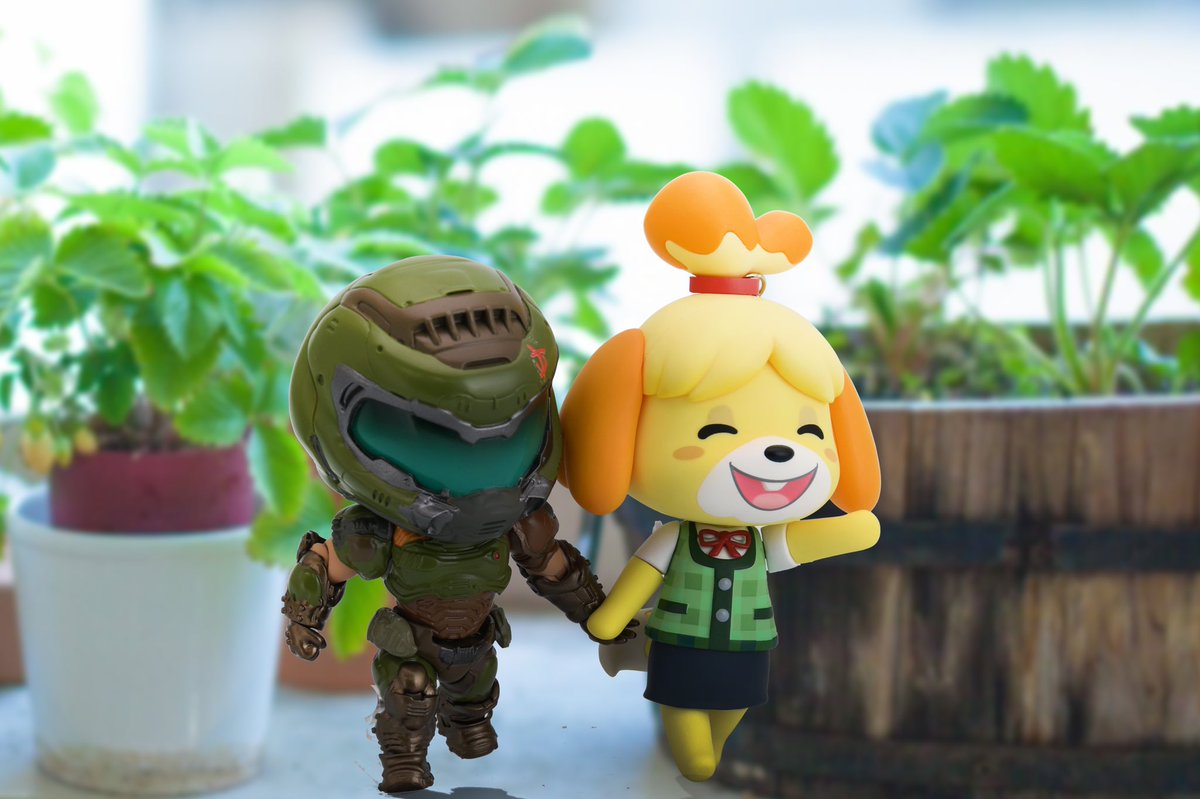 Getting 2021 off to a hopeful start, the official Bethesda account tweeted a picture of Doom Guy and Isabelle holding hands alongside the caption, "Happy New Horizons". Just like when fans created the fan fiction of a Finn and Poe romance in Star Wars, Bethesda has inadvertently opened the floodgates to a whole community of content. Remember that bizarre pairing of Mario and Bowsette? If gamers are anything, they're at least creative.

Back in reality, could we see an actual crossover between DOOM and Animal Crossing? Even though one of DOOM's murderous monsters probably won't be booking one of Tom Nook's trips, it's easy to imagine an Animal Crossing bobblehead appearing in the decimated wasteland of a DOOM game. Even more likely, what about a Super Smash Bros. crossover?

Nintendo is no stranger to bringing other IPs into the fighting simulator, with everyone from Banjo and Kazooie (Microsoft) to Street Fighter's Ryu (Capcom) and Castlevania's Simon (Konami) making their presence known. Doom Guy has been a long-rumoured addition to Smash, and Bethesda just gave Nintendo a free pass.

Will we see DOOM Guy and Isabelle together?

With Microsoft's recent acquisition of Bethesda, the company behind the Xbox is sure to refocus its efforts on some of the developers big IPs. DOOM Eternal set up the idea for a sequel of sorts, but at the time of writing, there's no news on whether there will be another game. As for Animal Crossing, everyone knows there will be a sequel out there somewhere on the "horizon".

For the time being, we're left living our Doom Guy and Isabelle fantasies vicariously through memes and fan fiction. Still, it's great that years after the connection was first made, Bethesda is finally getting on the bandwagon. Doom Eternal launched on PlayStation 4, Xbox One, and PC the exact same day New Horizons landed on Switch. This means the two titles will always be tied together in some way. All we need now is Doom Guy to get down on one knee and walk Isabelle down the aisle.