Meteos, the last remaining player of C9’s legendary debut roster, has parted ways with 100T for the second time after he was benched in favour of Contractz. He is unlikely to ever play on stage again.

Seven years after his record-breaking debut with Cloud9 in 2013, the 27 year old William “Meteos” Hartman is stepping away from professional play.

This news comes after Meteos was benched and moved to 100T Academy following a disappointing Week 3 of the LCS Summer Split. How did this veteran jungler of the LCS end up in such a polarising position with 100 Thieves?

100 Thieves Live
@100ThievesLive
We've evaluated many options with @MeteosLoL and have agreed that it's best for both parties to part ways. Thank you for your time with 100 Thieves, Will. We wish you the best in the future. 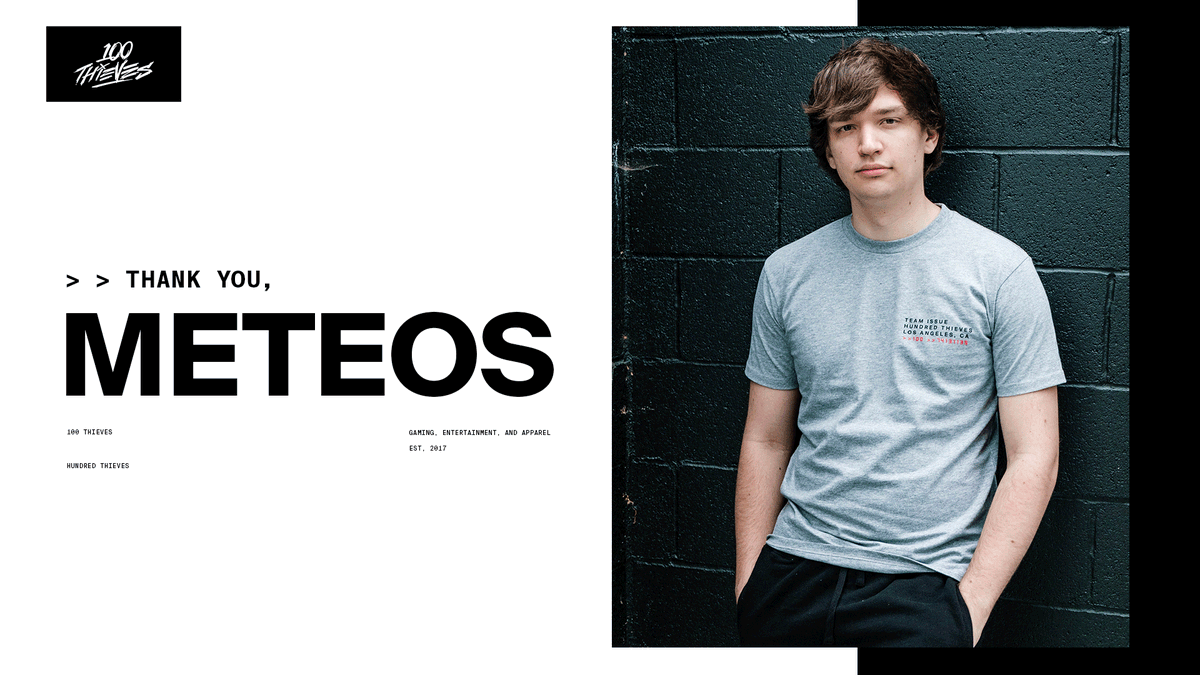 A Split to Forget

Meteos rejoined 100T at the end of 2019, ready to take the 2020 LCS Spring Split by storm. Although the team struggled to find consistent wins in the first half of the split, they found their footing in the second half to end the regular split in third place. Unfortunately, 100T were swiftly knocked out of Playoffs by two crushing defeats to C9 and TSM.

Meteos
@MeteosLoL
Very disappointing end to the season. Not much more to say but I wish we could have done better
30
3034

Despite this less than ideal result, Meteos stayed positive. Turning down offers from other teams like Dignitas, Meteos opted to stay on 100T for the Summer Split. Week 1 looked to be a challenging one for the team, facing off against Evil Geniuses and the Spring Split winners of C9.

Their first game against Evil Geniuses was not a promising one. Meteos’ Olaf could do little to stop Jiizuke’s Corki from rolling over 100T, ending up with a 2/7/3 KDA. Day 2 was no better, as Meteos found himself on the other end of the Kindred vs Olaf matchup against C9 Blaber. C9 dominated 100T even more convincingly than EG, closing out the game swiftly in just 26 minutes.

Already off to a poor start, it was crucial for 100T to find some wins in Week 2. Up against TL, Meteos decided to give Olaf another shot, but didn’t have the early impact that the champion needs to snowball. Against Broxah’s Graves, Meteos was out-farmed and outclassed while his team crumbled around him. Following the game, Meteos tweeted about their concerning start to the split.

Meteos
@MeteosLoL
Very disappointing start to the split for us, not at all what we'd hoped for. Just gotta keep moving forward~
3
846

Desperate for a win, 100T finally found themselves up against an easier team - Immortals. While all of their previous losses were against better teams, a defeat here to another 0-3 organisation would spell disaster for this roster’s reputation and morale. Meteos pulled out his Trundle pick against Potluck’s Lee Sin, managing to get his carries Ssumday and Ryoma ahead with a 100% kill participation score.

Following this much-needed win, fans were hopeful that 100T could turn things around and pick up a few more wins. Unfortunately, two more losses at the hands of CLG and TSM put the team at 1-5 by the end of Week 3. Things were looking dire for 100T.

With just 5.4 CS per minute and a 1.5 KDA, Meteos was not performing to the level he wanted, or the level that his team needed. While he certainly wasn’t the only problem with the team, it was clear that something had to change if 100T aimed to get a place in Summer Split Playoffs. It seems like the 100T staff also realised this, taking the decision to bench Meteos and part ways completely with the underperforming support Stunt. Taking their spots in the LCS roster were Contractz and Poome, who had been performing solidly on the 100T Academy team.

While Stunt responded maturely in his Twitlonger, Meteos had a less mature response in a string of now-deleted tweets. “This is gonna sound like a troll post but just got word that I’m being benched after week 3 summer again XD,” he begins. “Not sure why I expected anything different.”

“Pretty weird to hear the players on my team didn’t know about or agree with the decision. All credit goes to @Zikz @JungleJuice and @Papasmithy,” he continued. “Clearly the people not on the team know what’s best for it.”

This is the only remaining tweet, but the backlash and damage to his reputation is permanent. Even other professional players like TL Broxah chimed in, denouncing his online behaviour.

While such strong backlash was perhaps deserved, this isn’t the first time that Meteos has been burned by 100T management. During 100 Thieves’ first split in the LCS, Meteos was one of the key players that led them to a first-place finish in the regular season and a second-place finish in playoffs. After such a promising debut split for the team, fans had high expectations for 100T in the Summer Split and possibly Worlds.

The new organisation hit the ground running, going 4-2 in the first three weeks. What followed though was a baffling decision where Meteos was dropped from 100T despite being one of the best junglers in the league and tied for first place in the standings. 100T then traded Meteos to FlyQuest in exchange for their Academy jungler AnDa, apparently without even consulting or informing Meteos. At the time FlyQuest was in fifth place, and unlike 100T had little hope of going to Worlds. FlyQuest also had no intention of fielding Meteos on their LCS team, as their jungler Santorin had performed well in the previous week.

Through no fault of his own, Meteos’ dreams of going to Worlds were shattered and he was forced to play on a mediocre organisation’s Academy team. His strong reaction on social media was understandable and met with support from many fans. 100T then tried to explain the confusing trade, citing chemistry problems between Meteos and other members of the organisation.

While we can’t know exactly what happened behind the scenes in 2018, Meteos decided to rejoin 100T this year only to be removed again at the exact same time during the split. Although the management staff is now different and the reason for his benching was valid, it has to feel awful to get bitten by the same organisation twice.

After Contractz’ great performances in Week 5 to defeat C9 and go 2-0, there was little hope of Meteos returning to 100 Thieves’ LCS team. With 100X Kenvi also showcasing his talent in the amateur Scouting Ground Circuit, the organisation wanted to move him into Academy as their jungler. This left Meteos in an awkward position; either split time in Academy with Kenvi or leave the org.

100 Thieves Live
@100ThievesLive
We've evaluated many options with @MeteosLoL and have agreed that it's best for both parties to part ways. Thank you for your time with 100 Thieves, Will. We wish you the best in the future.

As a result, Meteos has decided to leave 100T. He has also released a Twitlonger in which he addresses his situation and plans for the future. Apologising for his unprofessional tweets, he writes: “I let my emotions get the best of me and made some angry tweets which were a mistake. It was unprofessional and I take full responsibility for that mistake and accept any consequences that come from it.”

In regards to joining another team, he was “given opportunities to talk to other LCS teams but decided that joining on such short notice wouldn’t be great for myself or the team.” “I know that competing is still where my passion lies and it’s not something that I’m ready to close the door on.”

Since he will no longer be playing in the LCS, Meteos’ future is uncertain but exciting.

“I took a pretty big break from streaming this year to try to focus on improvement, but it’s definitely something that I want to get back to.” He also mentions doing more analyst desk appearances, co-streams of LCS or other major regions, starting a podcast, or creating YouTube content. “All I know for sure is that I love playing, watching, and talking about League and there’s nothing that I’d rather do more.”

Meteos finishes off by asking that nobody harasses 100T for this situation, ending this dramatic chapter of his life graciously. Hopefully, he can find success in his streaming, while Kenvi rises up to 100A to fill his shoes.