With the LPL Summer Split Playoffs coming up soon and Worlds (if it goes ahead at all) on the horizon, all eyes are on China, often touted as the best region in the world.

In terms of gameplay, the LPL is arguably the best region in the world. In 2018, Invictus Gaming became the first non-Korean team to win Worlds since 2012, marking the beginning of a new era. In 2019, IG passed the torch to FunPlus Phoenix, who once again raised the Summoner’s Cup for China. Since then the region has only continued to accelerate, building all-star teams and developing new talents to crush their international opponents. Seeing how high the level of play in China has been so far this year, it seems like history is going to repeat itself.

LPL teams have a reputation for being hyper-aggressive and bloodthirsty in the early game, making their matches an absolute joy to watch. Contrasting the late-game focus of LCK teams, most LPL teams play to get ahead, and stay ahead. However, that’s not to say that LPL teams are worse at playing team-fights in the late game; in fact, at the 2020 Mid-Season Cup which replaced MSI, they beat Korea at their own game.

This “friendly” tournament between the two major regions was proposed as a replacement for MSI in the wake of COVID-19 but actually served to show the LPL’s dominance over the former best region. Unlike MSI, the top four teams of the spring split from both regions were invited to play against each other, giving a much more accurate representation of the two regions than MSI, where only one team participates from each.

The results were astounding; of the four Korean teams, only Gen.G managed to escape the group stage, before being promptly knocked out in a 3-0 series against Top Esports. The all-Chinese final resulted in Top Esports taking the win over FPX, while the LCK Spring Split winners of T1 failed to even advance to the knockout stage.

Some may discount these results due to the short best-of-one group stage, or the artificially increased ping. In reality, the tournament was as fair as it could be in the current situation; those who deny it are hanging on to the glory days of Korea, unable to see that the LPL is the new king of League of Legends.

Comparison to the West is more difficult, as there hasn’t been a proper tournament between all the major regions since Worlds 2019. It’s fair to say, though, that the LCS pales in comparison to the LEC, let alone the LPL. The LCS has never won Worlds and has always had a poor international record. Short of a miracle, it doesn’t seem like that’s going to change this year. Outside of C9, the LCS simply isn’t on the same level as the other three major regions.

As further proof of this, just yesterday the most widely used stats website ‘Games Of Legends’ recategorised the LCS from a ‘TOP’ region to a ‘TIER 2’ region, alongside the wildcard regions. This change was made due to requests from coaches using the site, as the LCS’ stats were clearly lower than the other major regions.

The LEC, on the other hand, has had a much better track record internationally. While the region hasn’t won Worlds since the original Fnatic roster in 2011, G2 and Fnatic have consistently managed to compete with and often beat the best teams of the LCK and LPL. Unfortunately, both G2 and Fnatic have never been able to translate that into a Worlds win. Last year, G2 stumbled at the last hurdle, getting swept by FPX in the Worlds Finals, and the year before IG did the same to Fnatic.

Right now at least, G2 and Fnatic aren’t even beating their domestic rivals. MAD Lions and Rogue sit at the top of the standings, and while it’s great to see these newer talents finding success, it’s hard to expect anything from these teams with little to no international experience. Unless G2 and Fnatic can return to form and qualify for Worlds in peak condition, Europe’s chances look pretty slim.

If you plan on watching some LPL leading up to the Playoffs, then you’re in for a treat. The English broadcast this year has been great, especially considering the circumstances. The LPL plays games every day, but unfortunately due to a lack of staff, the English broadcast does not run on Thursdays and Fridays. 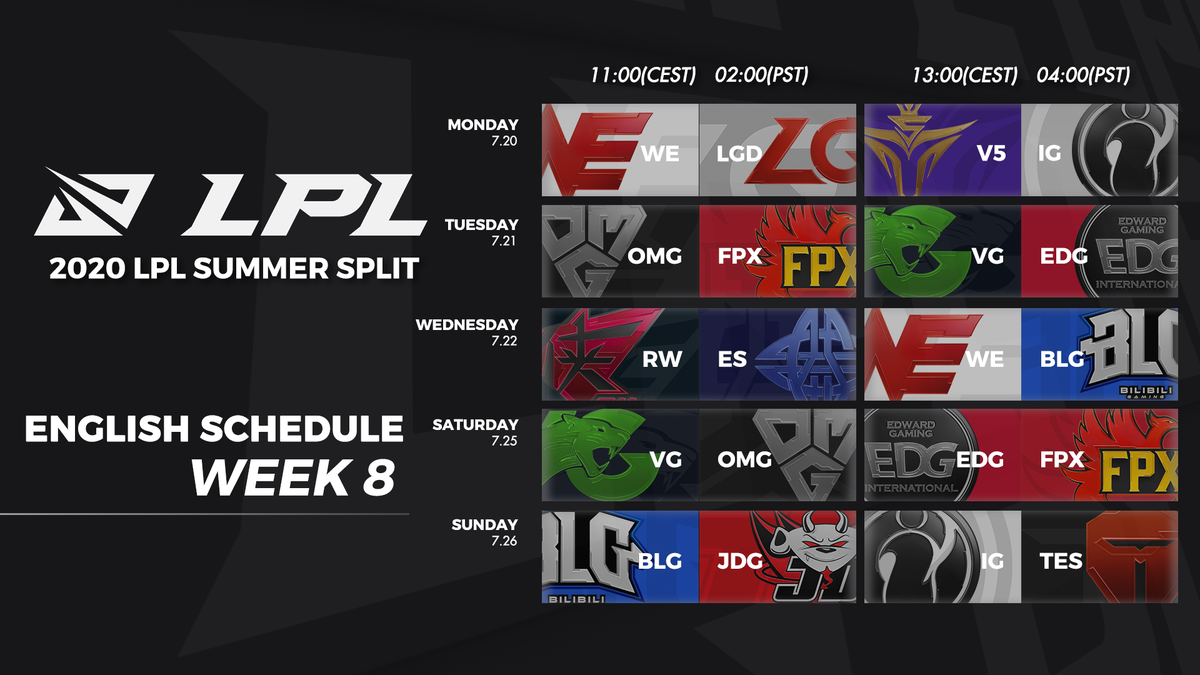 Looking at Week 8, there are a few games you won’t want to miss. Monday’s V5 vs IG matchup was a thrilling series between two of the best teams in the league; V5 are this split’s dark horse, while IG are former world champions and the winners of last split’s regular season. Nobody expected such a meteoric rise from V5 after their 0-16 record in Spring, but the community rallied behind ‘ppgod’ and his team as they clawed their way to 4th in the standings. IG are currently second in the standings with a 10-3 record, with a roster full of world-class talent like their mid laner ‘Rookie’.

IG also has to face off against TES on Sunday, currently the first team in the standings. TES are currently the team to beat, as they knocked IG out of Spring Playoffs 3-0, coming in second to JDG after a close 2-3 series. They also won MSC 2020, solidifying their position as the best LPL team. With possibly the best mid laner in the world ‘knight’ and the monstrous ‘JackeyLove’ as their ADC, this series is sure to be one of the best of the regular season.

If that’s not enough for you, Sunday also has JDG vs BLG. While BLG is not as high up in the standings as JDG, with Kanavi on one side and Meteor on the other, this jungle matchup won’t disappoint. Kanavi is among the best junglers in the world right now, and Meteor isn’t too far behind.

All streams and VODs are available on the official LoL esports website, and if you want to catch up on some of the narratives the casters run a podcast called The Last Hit on the LPL English Youtube channel.