Nobody can last forever, but esports is doing a particularly bad job of caring for its players - and we're only just beginning to see the effects.

In the discussion of professional League of Legends, it’s almost impossible to talk about the greatest players of all time without one specific name popping up: Jian "Uzi" Zi-Hao. Hailing from the LPL, he’s widely considered one of the best marksmen ever to play the game - famous for his incredible team fighting and unparalleled aggression. He’s been paired with various supports across his time on the competitive stage, and has been a near-constant presence at international events since his debut in 2021 on Starhorn Royal Club.

It was perhaps one of the biggest shocks of 2020, then, when he announced his retirement from competitive play due to debilitating wrist and shoulder injuries that had been plaguing him for the last few years of his career. It seemed almost unthinkable that Chinese League of Legends could exist without Uzi as a key component, yet that reality had finally come to pass.

The signs of his imminent retirement were there, yet fans just assumed that Uzi would be around forever. He had been taking regular, extended breaks for the last few splits of play, with RNG relying on substitute AD Carry Lu "Betty" Yu-Hung, but would always swoop back in at the beginning of playoffs and carry RNG to yet another World Championship appearance. 2020, however, was different. Uzi didn’t start a single game in the spring split, and the team looked messy and uncoordinated. Unbeknownst to a large majority of fans, Uzi’s contract was updated to expire on April 30, 2020.

Royal Never Give Up
@RNGRoyal
As of today, LPL0006 @UziRNG will officially retire. Uzi was not only the heart and soul of RNG, but also an icon in the esports world as a whole. From a teenager onwards he never gave up and worked as hard as he could to be the best he could in his role, he inspired many. 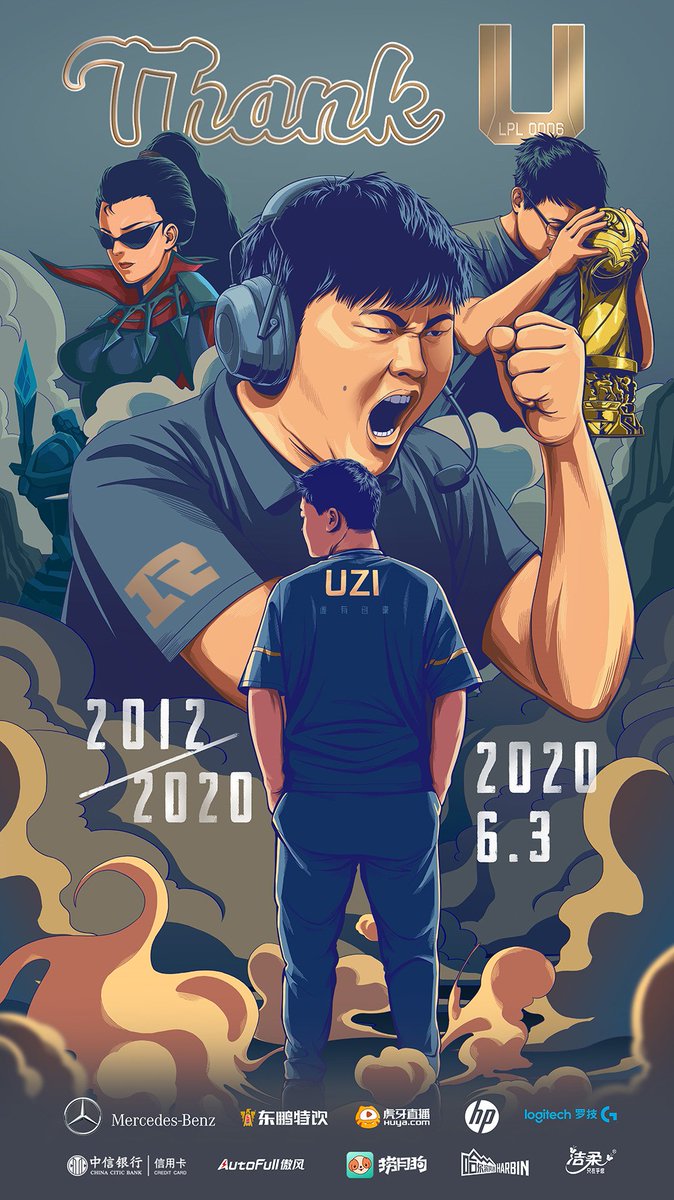 Since he was only 15, Uzi had been one of the best players to never quite make it. A World Championship title had been so close, so many times, only to be ripped away. Perhaps his closest brush with League’s ultimate title had been in 2018, when roster changes saw RNG pick up the LPL’s first international victory in three years at the Mid-Season Invitational. They were poised to take victory at the world championship: but the solo-lane dominant meta fell against their favour, and try as they might, they couldn’t make up for skill deficits in mid and top lane with Uzi’s team fighting skill.

There was no fanfare for Uzi’s retirement. No Dyrus-style, impassioned speech at a World Championship, no confetti cannons at an LPL final as the hero of Chinese League made his graceful exit. Just a series of tweets from the official RNG Twitter account, explaining that doctors had advised Uzi to discontinue pro play, and that he would be taking their advice. It didn’t feel like it did justice to the life of such an incredible figure - but honestly, there is little that could do justice to the story of Uzi.

In an announcement on Chinese social media platform Weibo, translated on Reddit, Uzi spoke not only of his injuries but of his battle with the symptoms of type 2 diabetes, a condition acquired through years of an unhealthy lifestyle. Switching to medication, a healthy diet, and regular exercise had not come quickly enough, and his body was finally starting to see the effects of years of the traditional ‘gaming lifestyle’ of fast food, little sleep, and zero exercise. Not only was he a pro player with a gruelling scrim schedule, but he also regularly streamed during his ‘rest periods’, meaning he never truly gave his body the break it needed to begin repairing the years of damage it had sustained. Uzi’s retirement is an unfortunate product of the ‘grind culture’ of esports, and is potentially the first casualty of an endemic problem within the scene that has yet to be truly addressed.

Uzi’s injuries could have been prevented. Teams are just now starting to invest in health and wellness coaches, but is it a case of too little, too late? Many currently active pros in League have been playing for upwards of five years without any kind of rehabilitation or support in maintaining their health. Retroactive stretching and wrist supports can only do so much, and there’s a high chance that the harm has already been done for a lot of these professionals. Ideas of working out, eating healthily, and getting good sleep fall by the wayside - unsurprisingly in an industry dominated by teenagers and just-about adults.

Is it too late?

It’s time esports started taking player health seriously. Steps have been made in the past few years, but there’s still a long way to go. We are just now beginning to see the effects of the past few years of negligence, and who knows how many more cases like Uzi there will be. G2’s Mihael "Mikyx" Mehle experienced wrist issues that put him out of commission for a large part of the 2019 Spring Split - in the LCK, Kim "Deft" Hyuk-kyu has been suffering from chronic shoulder pain on and off for the past few years. If Uzi’s retirement is what it takes for League esports to start taking player health seriously, then that is a high price to pay.

The games themselves are just as much to blame as the organisations that fail to care for their players. The concept of rank decay in competitive gaming means that professional players not only have to scrim for multiple hours every day, but they also have to grind themselves to the bone playing solo queue in order to retain their spots at the top of the ladder. Community perception is everything in the life of a pro, and a player's perceived value can change on a dime - you've got to stay on top of little things like solo queue if you want to stay ahead in such a cutthroat world. With this desperate desire to constantly grind out games, things like fitness and nutrition often go by the wayside. It's even worse for the players that aren't like Uzi, playing for small teams who can't afford to hire nutritionists and health experts. These players are giving their youth over to a sport that is slowly rendering them unable to do their jobs, and it's a worrying trend that is only just starting to be broken.

Conversations of wider implications aside, League of Legends lost someone great. Although he stated that he intends to stay around as a streamer, he ends his competitive career without the Worlds title many think he deserves. He came so close, so many times, but the odds never quite landed in his favour. Regardless of what his retirement means for the esport as a whole, it is an undignified end to a career that promised so much, yet could never quite deliver on those promises. Uzi will forever be the almost-king - but that does not mean that his career was not important, or inspiring, or any other word you might choose to describe one of the giants of competitive League of Legends.