Day 1 and there's already drama... and here at GGRecon we live for it!

The Call of Duty League Opening Day was not without controversy. We saw the day start with the epic opening match featuring intense trash talk between the T2P duo and Crimsix. The CODCaster was the talk of Opening Day, with social media exploding in complaints about how unpleasant the broadcast was for viewers. The drama did not end there, as The Los Angeles Guerrillas are officially protesting the outcome of their match against the Minnesota RØKKR.

In Game Two of their best of five match against the RØKKR, Lacefield of the Guerillas was seen using the Hardline perk. The in-game description for Hardline is “your killstreaks cost 1 less kill.”  Despite killstreaks being disabled in competitive play, Hardline is banned in the Call of Duty League ruleset.

This information was brought to tournament officials at the conclusion of the game; after the Guerillas had already won.  As a result, the LA Guerillas were forced to forfeit the map. This was a massive penalty given the circumstances. Instead of being up 2-0 in the series, the score was changed to 1-1. The momentum shift along with the extended delay was too much for the Guerillas. The Minnesota RØKKR went on to win the series 3-1.

In a Tweet on January 25, 2020, the LA Guerillas released a statement explaining their position. 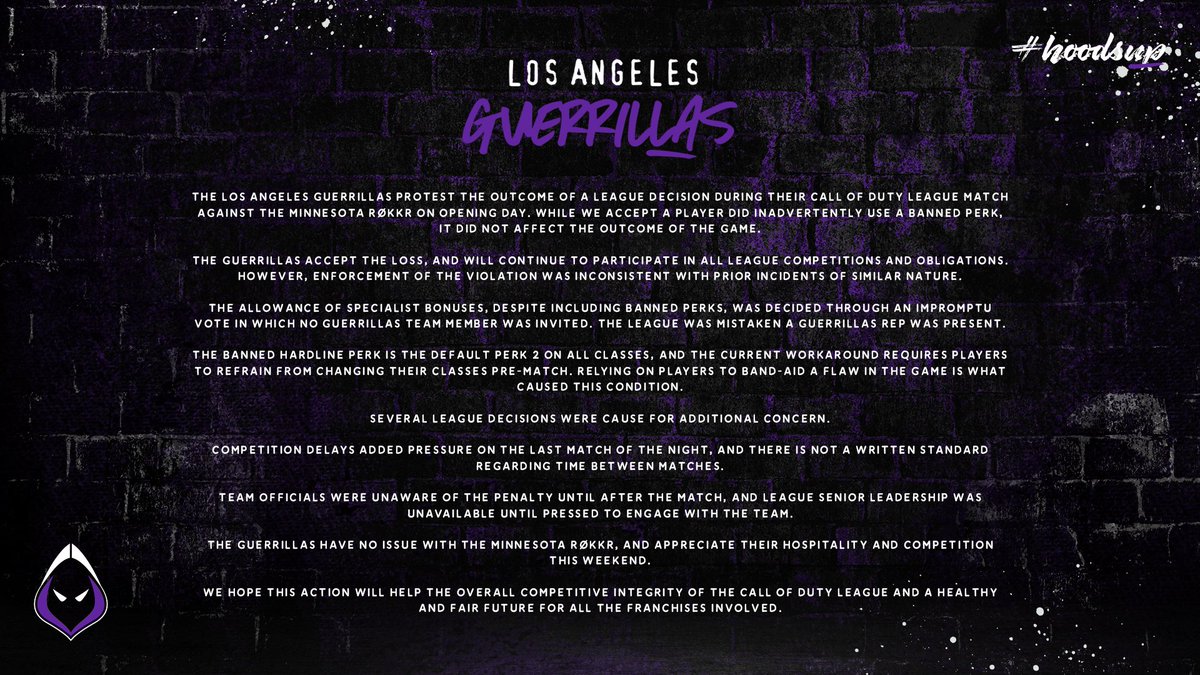 The Guerillas accept that Lacefield did, in fact, use a banned perk. However, they claim it did not affect the game in any way. Also, the statement claims that no team member or representative from the Guerillas was invited to the meeting in which these rules were implemented. The statement goes on to blame a flaw in the game for why Lacefield was using the perk in the first place.

The Los Angeles team ends the statement by announcing further concerns they have with how the situation was handled. They claim that the extended delay created added pressure on the players and that there should be a written standard for time between games. Along with this, the Guerillas say that there was no league senior leadership available to handle the issue until long after the game.

The Guerillas accept their loss and acknowledge that the final result will most likely not be overturned. However, they hope this action will “help the overall competitive integrity of the Call of Duty League and a healthy and fair future for all the franchises involved.”

This incident tarnishes what was otherwise a largely successful start to Launch Weekend. While rules are obviously in place for a reason, the harshness of the penalty has come into question. Forcing both teams to replay the map may have been reasonable but rewarding the RØKKR with a game they did not win seems extreme. The penalty certainly had an impact on the match, as the Guerillas went on to lose both of the next two games and were robbed of their chance to play S&D in Game 5; a game type they specialize in.

It will be interesting to see how the Call of Duty League handles this protest. As a franchised league, CoD League leadership owes it to the Guerillas to address this situation. Teams, players and fans alike can only hope that CoD League officials take this feedback and use it to better the league as a whole.