CD Projekt Red is rolling out the big Cyberpunk 2077 guns as a massive hotfix patch has apparently resolved over 60 massive gameplay issues.

There's been a glitch in the Matrix when it comes to CD Projekt Red's Cyberpunk 2077. Developers taught us that patience is a virtue thanks to the game's achingly long production process lasting eight years. Worse than this, the slew of delays from its original release date made some fans question if they'd ever be able to jump into Night City. If that wasn't enough, Cyberpunk 2077 has been dragged across the coals and hung out to dry with performance issues, substandard graphics, and glitches galore.

Things got so bad Sony even pulled Cyberpunk 2077 from the PlayStation Store - which is almost unheard of with an AAA title. CD Projekt Red has started issuing refunds, and although there's a promise that things will be better ahead of the title's next-gen release in 2021, it's a pretty sad state of affairs right now. Thankfully, the devs have been hard at work releasing a huge patch that promises to fix over 60 gameplay issues.

Cyberpunk 2077
@CyberpunkGame
Hotfix 1.05 is now live on Xbox and Playstation systems! PC version will follow soon.
Here is the full list of changes: 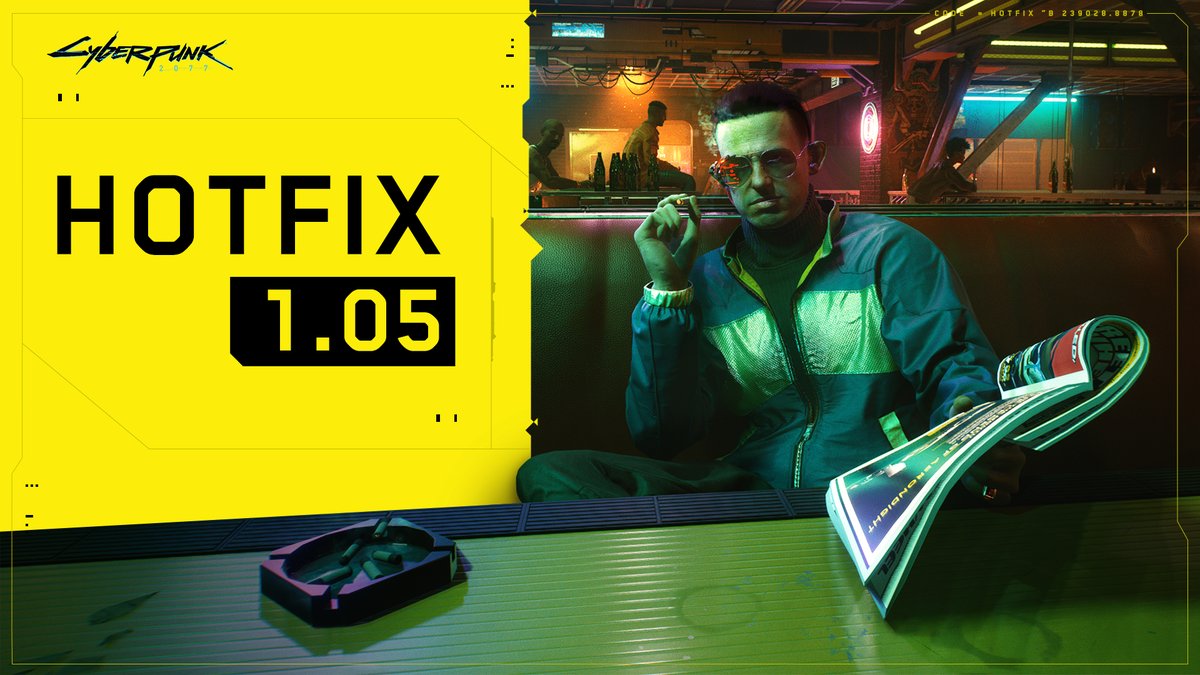 We've already had that huge Day 1 patch to try and get the jump on the army of gremlins that have weaselled their way inside Cyberpunk's code. Now, the Hotfix 1.05 is tackling a whole host of new issues. As well as adding "warmth to the HDR", the colossal Cyberpunk 2077 hotfix patch makes NPCs head for cover quicker, UI overlap is fixed, and there are "multiple stability improvements". The big one here is fixing the numerous glitches to the quests. Although these have become a hilarious thing to look out for, it's clear they can't stick around forever.

With the Hotfix 1.05, quests are coming under fire and getting some much-needed attention. You should now be able to land the helicopter in "Love Like Fire", Delamain won't appear upside down in "Don't Lose Your Mind", and Dum Dum will stop following V after "The Pickup". It should have improved things across the board, however, not everyone is convinced the Hotfix 1.05 has been the saviour CD Projekt Red tipped it to be.

What have fans said about the Cyberpunk 2077 hotfix patch?

Posting on Reddit, one player pointed out the differences between patches on the various Xbox consoles. We've got to admit, it looks like a completely different game in terms of graphical improvements. Not everyone is convinced though. Some PC players have actually said it's made things worse. One angry PC owner explained on Reddit how they installed the 1.05 patch and then wrote, "Wandered outside and a car randomly blew up, then all the NPCs disappeared and the traffic wouldn't move. I know the console versions are getting all the flak but this is ridiculous".

Another PC player added, "I thought I noticed a downscale as well. Most of the environment and NPC's look worse than before. I have image sharpening up via Nvidia control panel to compensate for RTX blur, so it's not that. Was 1.7gb for me on Steam. No settings seem to have reverted. Have they actually rolled out a hotfix for PC that has resulted in image degredation? Need more accounts to verify whether or not this is the case".

For the time being, it looks like CD Projekt Red still has a mountain to climb in terms of making Cyberpunk 2077 the game it has the potential to be. At least the devs are trying to fix things with patches, it's just that you'll probably be installing a lot of them for the foreseeable future. As it stands, this ambitious game is being described as a beautiful (but broken) mess.