After snow postponed the Call of Duty League Week Two, the competition is back with the CDL Super Week schedule.

While they say a little rain never hurt anyone, an Arctic storm tearing through Texas is a very different story. As Texas is still gripped by some of the worst weather it's ever faced, and the state remains at the mercy of the weather, there was bad news for Call of Duty fans this week as the Call of Duty League (CDL) Week 2 was postponed. Severe weather and power outages led to officials pulling the plug, with the promise there would be an "exciting announcement" about how the competition would move forward.

The CDL is only just back with its revamped 4 v 4 system, but with a new format and move to Black Ops Cold War, the second year of the tournament has seen viewing figures climb from its inaugural season. Things were going so well for CDL, but as the winter storm stopped progress in its tracks, fans and pro-players alike rightly asked how the 10 Week Two matches were going to be crammed into an already bulging schedule. Don't worry, we have the answers. Welcome to the CDL Super Week.

What is the CDL Super Week? 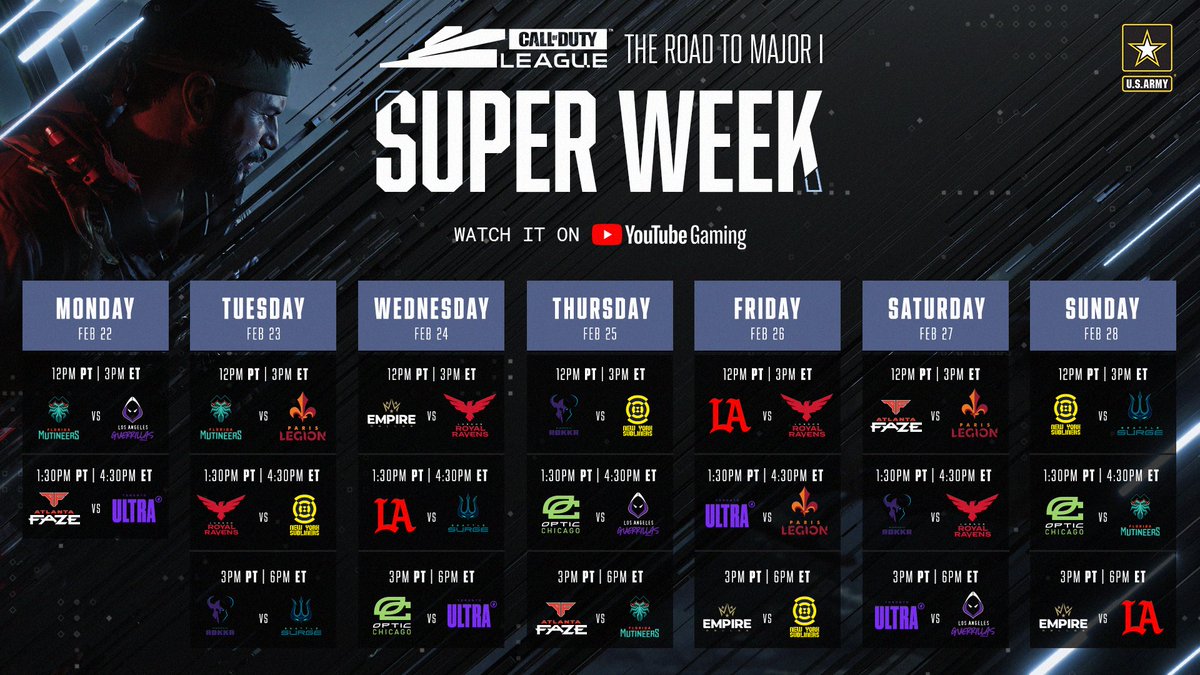 With 2021 still being ravaged by coronavirus, a lot of the professional gaming scene is remaining online. This has led to problems with connectivity issues, which in turn, causes rows about the fairness of competitive matches. To try and alleviate some issues, a lot of the big names have upped sticks and moved to Texas to play on the same server. It originally looked like a solid plan, but with the bad weather knocking out power, it means CDL has been decimated. Week Two was supposed to run from February 18-21, but now, it's being remodelled as the CDL Super Week.

Announced by the official CDL Twitter, we were on the money that the organisation is merging Week Two and Week Three. This means, there will be a whopping 20 matches over a seven-day schedule. Starting on February 22, the CDL Super Week will kick off with a double-header on the 22nd, followed by another six days of triple-headers from February 23-28. Hold onto your butts!

Will the CDL Super Week change the rest of the competition?

CDL was already on a pretty tight schedule, so the introduction of the Super Week has also led to a shift for the season's Major. Bearing in mind Week Three was already due to take place just three days after Week Two, and the Major just a day after that on March 1, CDL has had to adjust things slightly. As much as we'd love to see two weeks straight of matches, the Major has been pushed back to March 3. Considering it's just a two-day move, there's still a lot of competitive CoD play on the horizon.

Either way, 20 matches in a seven-day period means there's a mountain of matches for everyone involved. Fans will have a tonne to tune in for, so despite the snowy weather, things are definitely heating up in Cold War. In general, the teams had to play five Stage 1 matches anyway, so the introduction of the Super Week shouldn't affect them at all.

Things will restart on Monday, February 22 when the Florida Mutineers take on the Los Angeles Guerrillas. We've already (unsurprisingly) seen LA Thieves and FaZe emerge as frontrunners, but with so many matches still to come, it's anyone's game on who will be crowned kings of the CoD castle in 2021.