Severe weather and power outages have forced CDL Week Two to be postponed as the Call of Duty competition grinds to a halt.

Just when it looked like the competitive Call of Duty scene was finally getting back on its feet, the second week of the Call of Duty League (CDL) has been postponed. Players had barely put their rivals in their crosshairs before the rug was pulled from beneath them. Things were just getting started as the CDL flipped from 5 vs. 5 to a new 4 vs. 4 format. CDL Week One was a big draw for pro players and fans alike, but don't worry though, we hope it will soon be CDL business as usual.

There's been a changing of the guard with CDL after the inaugural 2020 season and Call of Duty: Modern Warfare made way for a revamp with Black Ops Cold War. Ten matches took place between February 11 and February 14, with Atlanta FaZe hosting via YouTube - after YouTube Gaming took the rights to CDL and Overwatch League last year. There were just enough changes to keep us hooked and viewership climbed from last year's debut. Unfortunately, the celebrations have been short-lived.

Why has CDL Week Two been postponed? 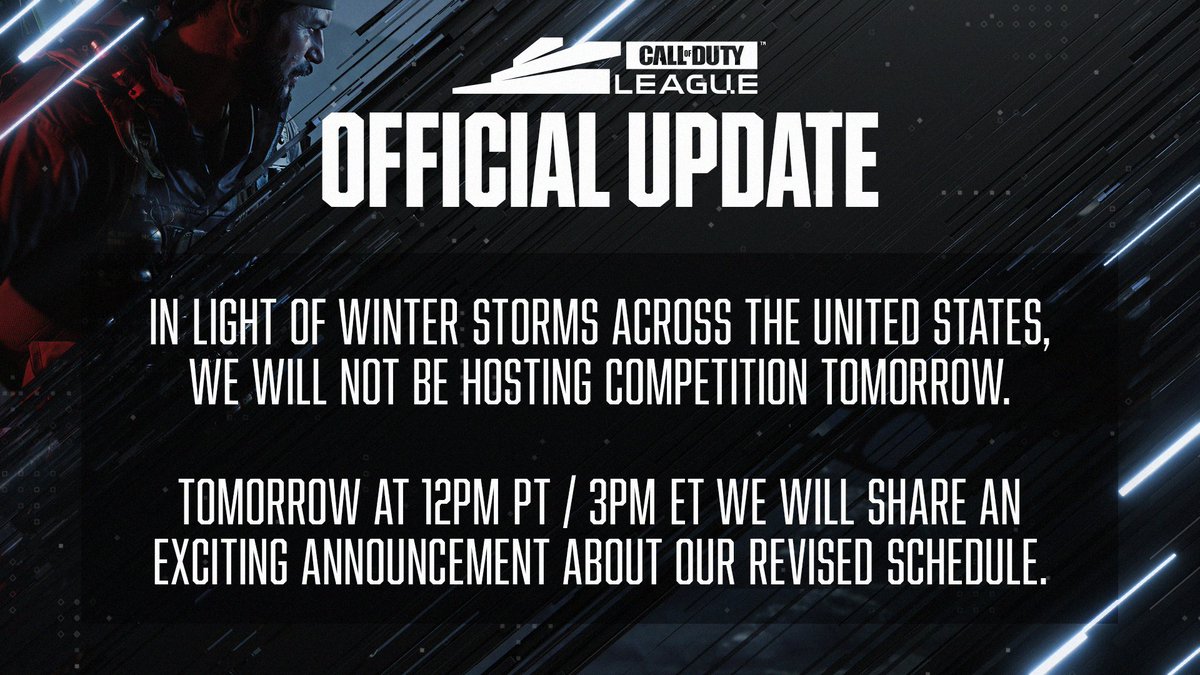 Even though CDL would undoubtedly like to keep its new-found momentum going, Mother Nature has other plans and has intervened for Week Two. League officials have made the tough decision to postpone Week Two matches due to the winter storms in Texas causing power outages. Most of the big names play out of Texas, and if a match were lost due to power outages, we doubt we'd ever hear the end of it. Connectivity issues are already a point of contention in remote play, so CDL is playing it safe for now.

The decision to announce CDL Week Two has been postponed was made via Twitter. The official CDL Twitter broke the news but said it has an exciting announcement coming today (February 18) about a revised schedule. At the moment, it's only matches between Florida Mutineers and Los Angeles Guerrillas/OpTic Chicago and Toronto Ultra that have been delayed, but expect the rest to follow suit.

With the coronavirus pandemic ravaging the gaming world, many CDL players relocated to Texas so they could all play on the same server. In theory, this would mitigate connection issues, however, it's been the tool of the CDL's undoing, as the pro players find themselves gripped in some of the worst Texas weather on record.

What's next if CDL Week Two is postponed?

Until CDL makes its "exciting" announcement, we're left with bated breath about what's next. The schedule was already tight thanks to Week Three due to kick off on February 25-28 and the week-long Stage 1 Major planned for just days later on March 1. Even though there are still 10 Week Two matches that need to be slotted in somewhere, we imagine CDL will pepper them throughout the week or try to deliver a supersized Week Two/Week Three hybrid.

We've already seen the pros struggle in the midst of the winter storm. Atlanta FaZe's Daunte "Sibilants" Gray has been dealing with a leaking roof, while retired CoD pro Thomas "ZooMaa" Paparatto took several big names in when they were left without power in the Dallas/Fort Worth area. Hunkering down in their very own Verdansk, ZooMaa adopted Los Angeles Thieves' Austin "SlasheR" Liddicoat and Thomas "TJHaLy" Haly, while also taking in Minnesota RØKKR's Dillon "Attach" Price, Preston "Priestahh" Greiner, and Lamar "Accuracy" Abedi. At least sportsmanly conduct isn't dead!

With the delay now confirmed, it remains to be seen whether viewing figures will be affected or if even more fans will be tuning in for the delayed Week Two - in whatever form it's released. CDL clearly has a solution for how things will play out, but with no end in sight for the deadly Arctic storm, this might not be the only CDL week that gets postponed.