One artistic Fortnite fan has created a line of skins that are worthy of Epic Games developers.

Some three years after Fortnite first burst onto the battle royale scene, Epic Games' billion-dollar title is going from strength to strength. One of the biggest parts of each new season is seeing which skins are parachuting off the Battle Bus and into action, but now, a budding young artist has created their own skins that look like they've come directly from Epic.

Fortnite crossovers have previously immortalised John Wick, the cast of Stranger Things, the wide world of Star Wars, and Tyler "Ninja" Blevins as skins. This has obviously led to whole fan communities that design their own dream skins, however, few compare to the work of 22-year-old Denni - who goes by @D3NNI _YT on Twitter.

D3NNI ðŸŽƒðŸƒ
@D3NNI_yt
âœ¨ARIANA GRANDE - FORTNITE ICON SERIES SKIN CONCEPTâœ¨
This concept has been in the works for a while now and it's finally complete! Tried to make this a mix of Ariana's aesthetic but still keeping true to Fortnite's art style. 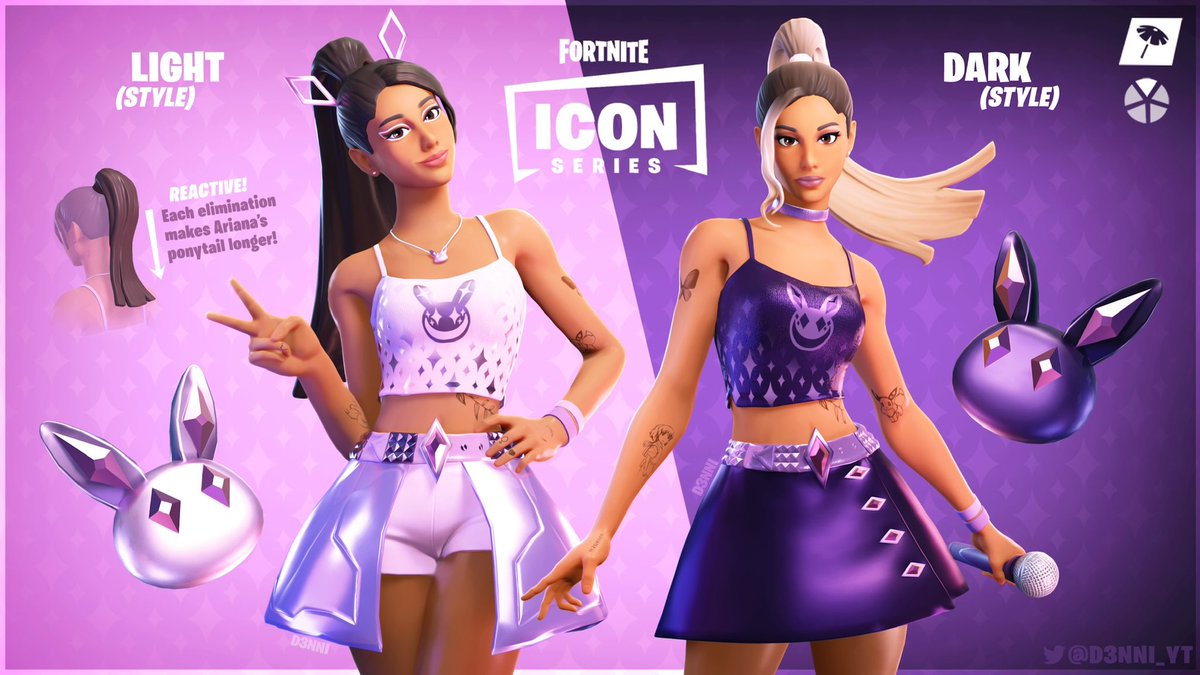 As Fortnite continues its Marvel-themed Chapter 2 Season 4, skins are a huge part as we get to grips with everyone from Storm to Black Panther, Wolverine to Blade. Forbes spoke to Denni, who explained each skin can take between two to three full days of work in Blender, Photoshop, and Substance Painter. Although some are done for fun, the vast majority are done on a commission basis for Fortnite streamers who need to stand out from the crowd.

Denni went on to explain his favourite concept at the moment is Academy Calamity, which is described as an "evolving" skin based on the former fan-favourite. Calamity was available as Season 6's Wild West set, and even though it doesn't look like she'll be back, Denni has a soft spot for her. Celebrating all this spooky this October, Denni imagines Calamity as a vampire hunter for this month's Fortnightmare.

D3NNI's work has even caught the attention of Epic bigwigs Tim Sweeney and Donald Mustard. Discussing whether he'd be directly contacted by anyone as Epic, Denni added, "I sadly have not been contacted yet (and I wouldn’t be able to tell you if I actually did) but it’s my #1 goal at the moment to get a skin concept into the game and hopefully one day get hired by Epic as a 3D Concept Artist.

"Many people on Twitter really want me to get hired by Epic, which is such a huge compliment that I’m forever grateful for, but I don’t think I’m personally even ready yet! In my opinion, I have a long way to go when it comes to learning custom modeling/texturing before Epic would consider hiring me, but you never know!”.

D3NNI ðŸŽƒðŸƒ
@D3NNI_yt
ðŸ‚ðŸŽƒ FORTOBER 2020 ðŸŽƒðŸ‚
Fortober is a month long Fortnite art challenge where you create art for each week's theme! You can make skin concepts, art of existing skins, remixes of skins, whatever you want! All art is accepted ðŸ’œ
Have fun! #Fortober2020 ðŸŽƒ
MORE DETAILS BELOW â¬‡ï¸ 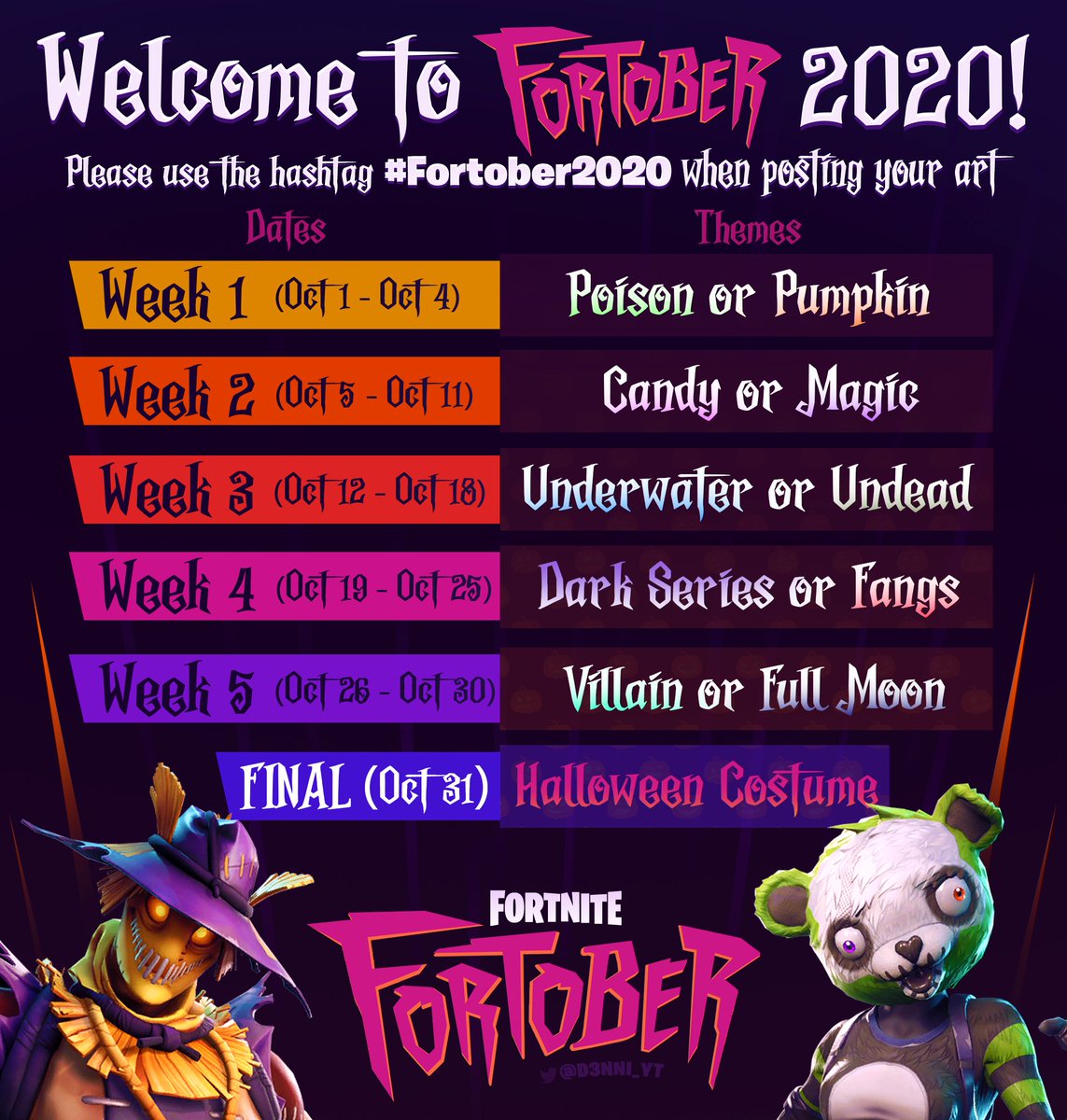 Elsewhere, Denni has piqued the interest of Pokimane, who previously devoted a video to his work when he designed her a skin. He continued, "It feels so surreal. Like I casually just interact with these huge creators on Twitter now but inside I'm still fully fangirling. When Pokimane dedicated an entire video on my skin concept I was honestly in tears".

Talking about his popular Ariana Grande skin, Denni concluded, "Although it’s most likely impossible, getting one of my Ariana concepts noticed by Ariana Grande herself would probably send me to the grave". When it comes to what's on the way, Denni teased there are five more skins coming in October alongside his Academy Calamity and Coach Jonesy skins. They're part of a Halloween-themed storyline he's designed as his own Battle Pass.

Whether Denni's future lies in working for Epic remains to be seen, but either way, there's no denying how impressive his Fortnite skins are.