Astralis and Natus Vincere are the top prospects, but a few strong underdogs are standing in their way.

In recent months, many European CS:GO teams have made severe roster changes. We’ve now been able to see all these restructured rosters in action during ESL Pro League, and following the conclusion of the Group Stage, eight teams are heading to the playoffs. In a Double Elimination bracket, they’ll fight it out for a share of $450.000. We’re taking a look at the playing field and discuss which teams have the biggest shot at making first place.

Obviously, the teams that made the top spots during the regular league phase arguably have the biggest changes. After all, they only concluded their winning run a mere week ago. At the very top of the standings are Natus Vincere and Astralis in Groups A and B, respectively. NaVi made first place after defeating all teams but ENCE. The Finns had upset them with a swift 2-0 in the first week of the season, but ever since then, NaVi have swept all opposition. The same holds true for Astralis. The Danes lost their opening duel versus Complexity just days after Lukas “gla1ve” Rossander had made his way back to the roster. The fact that their only loss dates back this much only goes to show how dominant they have been throughout the season. The two teams, fortunately, start on opposite sides of the bracket, meaning that we’ll probably see them clash in the Upper Bracket Finals.

With Heroic, Astralis have one of the weakest playoffs contestants at their hands. Casper “cadiaN” Møller has tried to lead this team as best as he can, but they haven’t been the same since the departure of Nicolai “HUNDEN” Petersen. When the two sides last met, Heroic almost took down the Danish juggernaut - but as it turned out later, HUNDEN had been using the coaching bug to get an unfair advantage. So, there’s that.

TwitLonger — When you talk too much for Twitter
Source: Tl.gd
Read Article

Owen Schlatter
@oBoCSGO
The hardest decision I have ever made...@Complexity
Read:
207
6026

Complexity might have been looking at an easy victory over ENCE in the upcoming playoffs, were it not for the sudden departure of Owen "oBo" Schlatter. The 17-year-old has left Europe to head back to the U.S. in a sudden move that has left Complexity in shambles. Their coach, Jamie "keita" Hall, will have to step in for these playoffs games. We saw them in action against sAw a few days ago, a game which they lost. The coach is surely trying his best, but the team is essentially playing with just four men at this point. How well can Benjamin "blameF" Bremer prepare his squad before their first match? While they may have looked like one of the top three teams in this bracket before, their survival in this tournament is not at all guaranteed.

Overall, Astralis look poised to take this trophy home. Their form with gla1ve and Patrick "es3tag" Hansen has just been so incredibly great that we're now even seeing es3tag perform on the top of the standings. This may be the dawn of a new era for Astralis, but we haven't really seen them work with their full seven-man roster. Their idea is to have Lucas "Bubzkji" Andersen and Andreas "Xyp9x" Højsleth in and out of rotation at some point, but so far, we have only seen one iteration of this roster perform.

But while the likes of Astralis and NaVi look to take this trophy home, there are a few underdogs worth considering. Team Spirit, for example, have played out a beautiful season so far. In a group with fnatic, Vitality, mousesports and FaZe Clan, they managed to be the ones sitting right behind Astralis and Complexity. In stunning upset victories, they took down Mathieu "ZywOo" Herbaut and his French superteam. Later, they dismantled mousesports as well. In BIG, they have quite a strong - albeit shaky - opponent in the playoffs bracket. However, we shouldn't put anything past this CIS roster. When Nikolay "mir" Bityukov decides to go ham, his team can basically take down anyone. 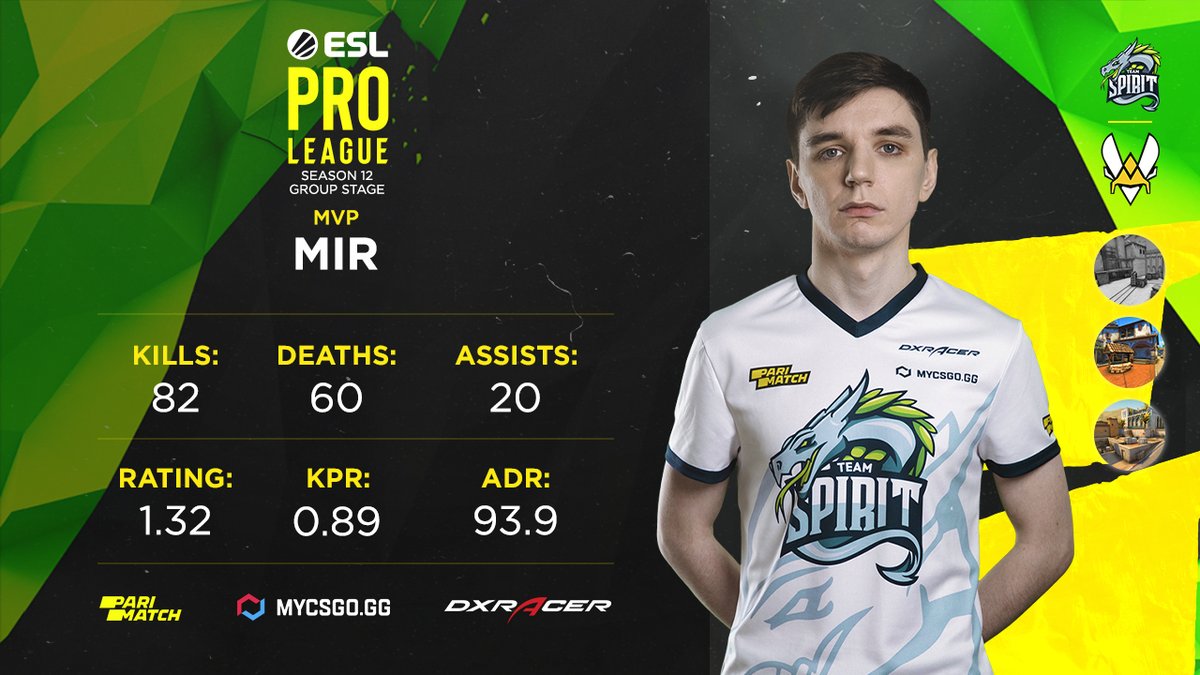 Johannes "tabseN" Wodarz' mousesports have quite a tall order ahead of them. They are going to face Natus Vincere, which makes it highly likely that we will see them going down to the Lower Bracket early on. Going back to ESL One Cologne, this was the Opening Match that eventually cost them their tournament lives. But that was with Özgür "woxic" Eker. While he may be the better player on paper, mouz have shown instant improvement with Aurimas "Bymas" Pipiras on board. So maybe they will be able to swing this match versus NaVi in their favour this time around.

So what do we make of the ESL One Cologne title holders, Heroic? With their coach gone, they're not looking particularly strong anymore. Most importantly, only Martin "stavn" Lund is performing to the level we have previously seen him play at. René "TeSeS" Madsen is virtually absent from the top of the scoreboard, giving the Danish team even less to work with.

ENCE are also not looking particularly stable. Their ESL Pro League run was marked by shaky victories over some top teams, followed by shocking losses to weaker rosters. They managed to take down NaVi, but they also lost out to GODSENT. Depending on which version of ENCE enters the playoffs, they might actually be a competitive force to be reckoned with - or one of the first teams to exit the event. The playoffs commence on Tuesday, with NaVi and mouz locking horns at 2pm CEST.