The new Warzone Pacific map is drawing nearer, as Vanguard is on the verge of launching its first season. Warzone has been in dire need of a new map for quite some time, so naturally, players are ecstatic about the new map arriving for free this December. However, there has been a lot of secrecy surrounding it, so we've worked up everything you need to know about the new Warzone Pacific map, including release date, size, points of interest, and more. 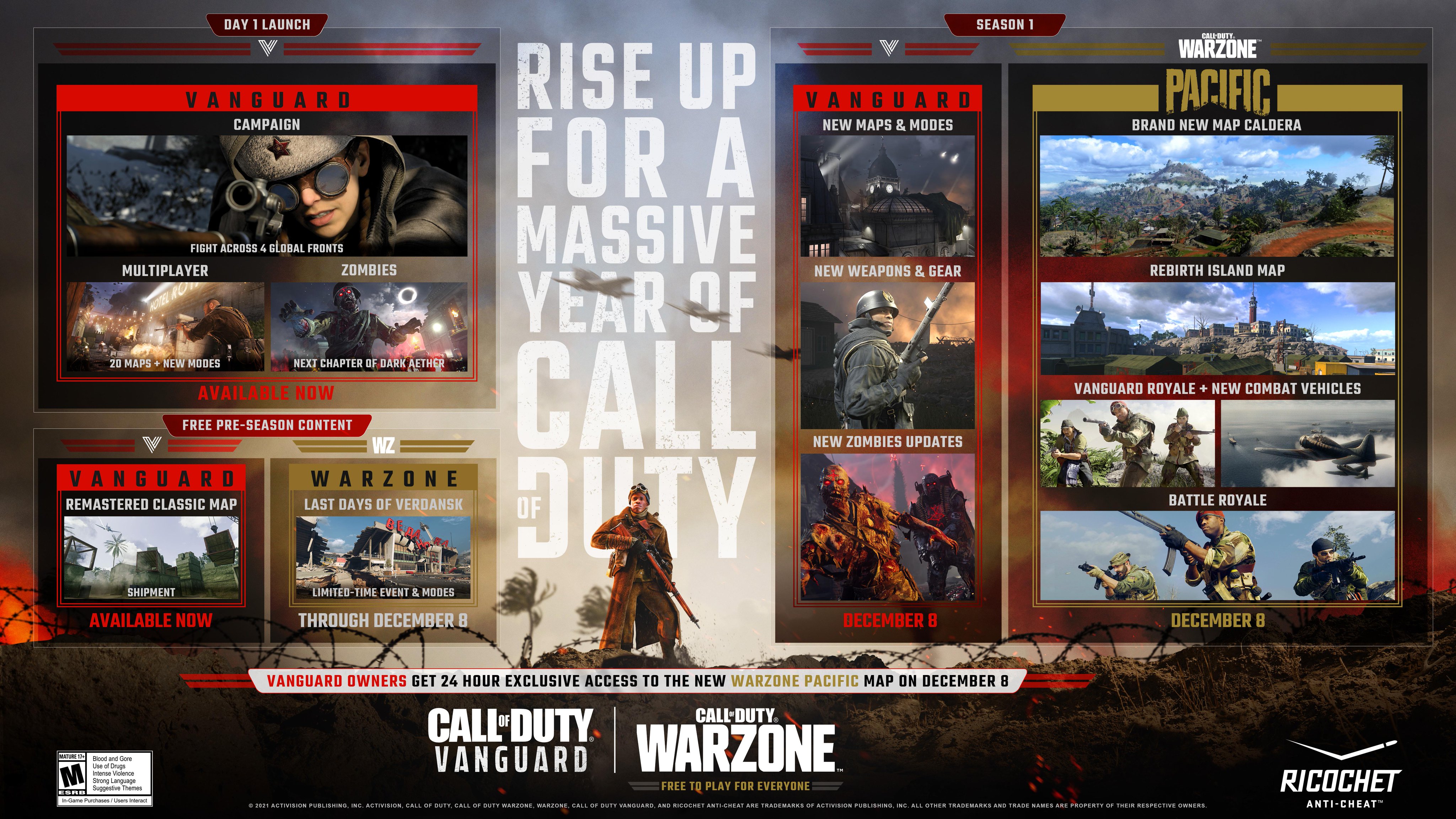 While originally scheduled to launch exclusively for Vanguard players on December 2 and everyone else on December 3, the new Warzone Pacific map was pushed back a week and will now launch on the December 8 and 9 respectively. As well as 24 hour early access for Vanguard players, the first season of the WW2 shooter will launch at the same time. The new Warzone Pacific map will be roughly the same size as Verdansk, however that is where the similarities end. The new Pacific settings means the concrete streets of Verdansk will be replaced by lush forests, mysterious ruins, and a dormant volcano. The Warzone Pacific map looks far more visually diverse than anything featured in Verdansk, and is now an entirely surrounded island.

Activision stated that the new map had been built "on learnings from the community". That seems to be translating to a map that players will explore more, rather than just dropping into the same few locations. With 15 different sections and over 200 points of interest revealed by the above map we know that like Verdansk, some series classic maps will be making their way into Caldera such as Sub-Pen. Many Warzone players have become all too familiar with cheaters. As such, it was a relief for many when Activision announced its new anti-cheat solution RICOCHET would be coming to both Vanguard and Warzone. We've now had official confirmation that RICOCHET will feature in the launch of the new Warzone Pacific Map, which was obviously pushed back to December 8. This kernel-level driver on PC will assist in identifying cheaters and banning them from the game. Among the many points of interest and diverse design of the new Warzone Pacific map, dogfighting is certainly an unexpected surprise among them. This feature will only be available in the Vanguard Royale mode, which includes Vanguard exclusive loadouts. Granting another Warzone winning tactic, players will be able to take to the skies in machine fighter aircrafts. This could revitalise the need for launcher in Warzone, but it also plays into the new anti-air trucks that players can use to counter aircraft. It will be interesting to see how viable using aircraft will be as a winning tactic in this mode. For those not as keen on the longer drawn out matches that will take place in the new Warzone Pacific map, Rebirth Island will return when Pacific launches. This means players can enjoy faster paced and more tight-knit version of battle royale, from the infamous Black Ops 4 mode.

Warzone New Map: It Will Feature Over 150 Weapons While players faced some meta-breaking implementations of Cold War weapons into Warzone, the new Warzone Pacific map is hoping things go a little smoother this time. Players will be able to enjoy weapons from Modern Warfare, Cold War and now Vanguard in Warzone Rebirth Island and regular Battle Royale and Plunder modes. The only place you won't be able to use all weapons are in Vanguard specific modes.

That's everything we know about the new Warzone Pacific map, however, we'll be sure to update this article as soon as we know more. In the meantime, why don't you check out our Warzone assault rifles guide, while you play through the final weeks on Verdansk.