Worlds finally has all of the groups slots filled up.

Unicorns of Love and LGD Gaming are the final two teams to take the last two League of Legends World Championship group spots after sweeping both of their respective opponents. Unicorns of Love were dominant in their win having constant successful break-out team fights in every game against the Turkish Championship League’s (TCL) ParaPara SuperMassive.

LGD Gaming finished turning around their poor play-ins group stage performance having strong victories in both games one and three while they stole game two right under the noses of Legacy Esports — the Oceanic Pro League (OPL) representatives.

It was a low kill game one victory for LGD Gaming, only having 12 kills total in between the two teams at 29 mins. LGD continued right where they left off in their last series against Rainbow7 but this time around it was more controlled. LGD Gaming slowly bled Legacy Esports out with the pressure they had amounted from their lanes — forcing them to utilize their Galio and Gangplank ultimates defensively rather than to make plays.

The Chinese representatives had a small lead until a strong team at the 22-minute mark solidified it. A good flank from Xie “Langx” Zhen-Ying on the Renekton instantly flashing onto Leo “Babip” Romer’s Nidalee was all LGD needed to secure themselves soul point and Baron. LGD Gaming performed a masterclass forcing Legacy Esports to waste all of their ultimates leading to a punish.

LGD had a solid pick and ban, drafting a 1-3-1 composition with their Renekton and Twisted Fate picks. Even with Babip having a strong early game on the Nidalee, LGD’s lanes were too much.

LoLEsports Stats
@LoLEsportsStats
.@LGDgaming keep on rolling through the #Worlds2020 Play-ins Knockout Stage and take game 1 over @LegacyOCE. This was the least bloody game this Worlds so far with only 0.41 CK/M (Combined Kills per Minute, Worlds average is 0.81). 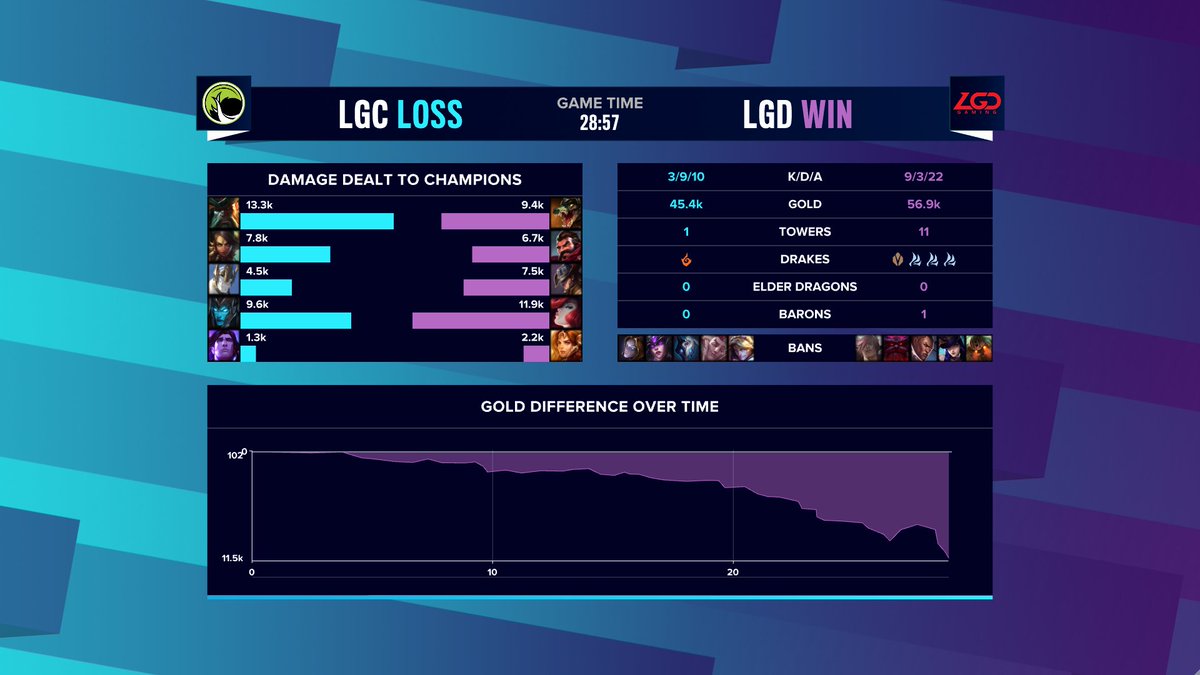 Slow start to game two as Legacy Esports' Quin "Raes" Korebrits's Draven took a while to activate.LGD had a chokehold on the lead having Su "xiye" Han-Wei beat James "Tally" Shute in an unfavourable match-up of Kassin versus Twisted Fate. Xiye's stellar play prevented Tally from performing any kind of roam plays. Although no kills to start no kills to begin the game, LGD Gaming were poised to take a slow and controlled win.

Come around the 21-minute mark the first fight broke out in which Legacy were able to take it and get themselves up to soul point. Raes' Draven was activated, LGD couldn't quite get to him in the team fights.

All seemed lost for LGD until two fight wins in succession led to them getting back into the game and stealing right from under Legacy’s noses. A fight at dragon for Legacy’s soul which resulted in a xiye Kassadin quadra kill helped them claw back into the game. With the final play of Legacy forcing Baron in an act of desperation, LGD aced them and were able to end due to Legacy’s death timers.

LGD closed out the series with a decisive third and final game. A faster-paced early game from both teams was quite a difference compared to the first two games of the series. Nonetheless, LGD took control of the game after a failed Twitch submarine play attempt from Raes and the rest of LGC — this led to the eventual control and end of the game.

LGD Gaming got slotted into Group C in the Worlds Cooldown post-show. 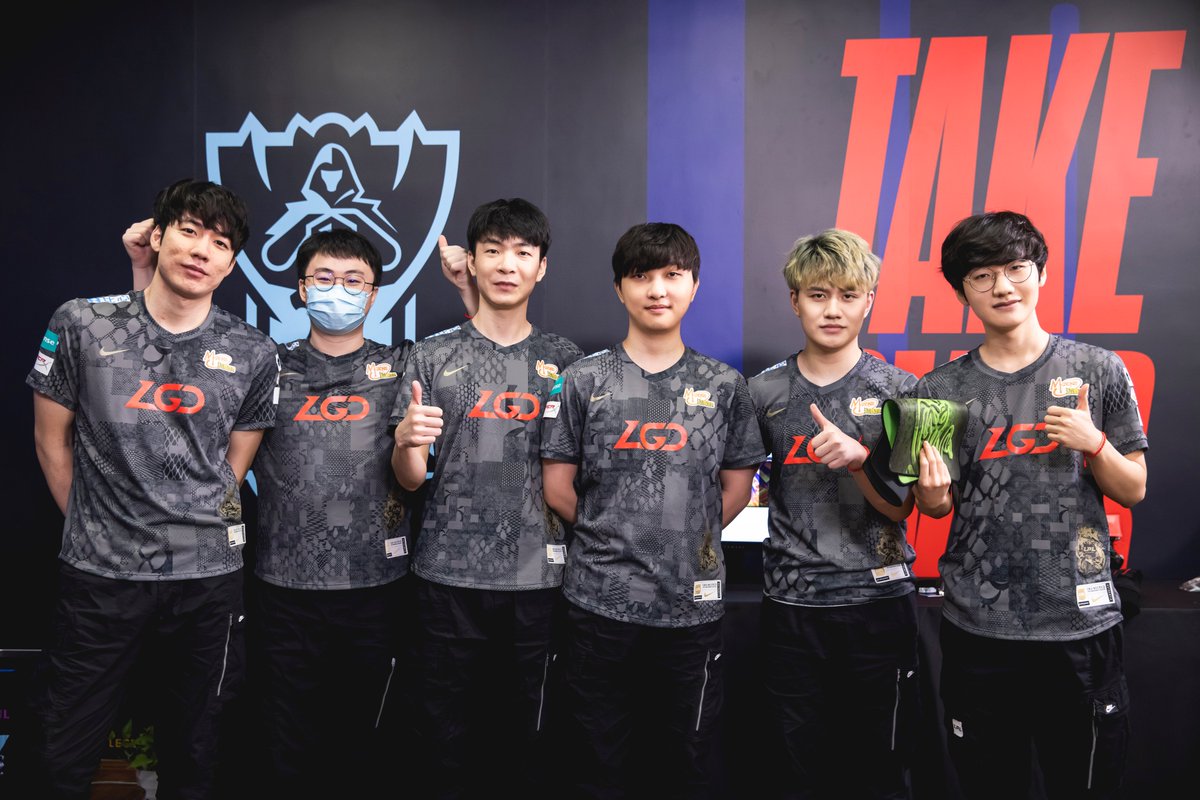 Unicorns of Love VS Parapara SuperMassive

SuperMassive continued their aggression they displayed in yesterday's matches versus Europe's MAD Lions in game one of this series. They engaged most of the fights in the early stages of the game, but Unicorns of Love did a stellar job of separating the fight into two parts — allowing for Ilya "Gadget" Makavchuk to run amok on the Twitch. After this, Unicorns of Love seized the initiative, engaging all of the fights.

Although SuperMassive made them work for it, It was business as usual for the Unicorns ending the game. SuperMassive tried their best to contain Gadget, but it wasn't enough as well as they put themselves in a massive hole with their early Malphite pick.

Once again, SuperMassive had an early game, this time around it was a three-level lead for Lee "KaKAO" Byung-kwon on the Lilia over Kirill "AHaHaCiK" Skvortsov's Graves. KaKAO played a brilliant first few minutes of the game taking four camps away from AHaHaCiK and both of the scuttle crabs — giving himself a two-three level lead at six minutes. Seemingly like clockwork, another key team fight broke it all open in favour of Unicorns of Love. The League of Legends Continental League (CIS) representatives played a perfect team fight at the 10minute mark, acing SuperMassive and giving Lev "Nomanz" Yakshin a triple kill on the Kassadin.

It was all over since that play, as Unicorns of Love completely terrorized the map — countering any play that SuperMassive tried to throw at them. The Unicorns were so ahead that they had three aces by the 24-minute mark. A slow game to start game three’s early game but it quickly turned into a wash. Another game-opening team fight and the Unicorns of Love turned their four thousand gold lead into seven thousand after an ace at dragon.

With their backs against the wall, SuperMassive tried multiple plays and pick attempts to get them back into the game, but it wasn’t enough. The Unicorns took care of business, dotting their i’s and crossing their t’s. This was the first time the Unicorns of Love made it into the group stage after failing to make groups three years. After their victory, the Unicorns were slotted into Group D in the Worlds Cooldown post-show.

For more Worlds coverage, go over to our League Of Legends Worlds Play-Ins: Schedules, Standings, Results, And Interviews article where we are giving updated information pertaining to the tournament.