'They need more people watching and taking notice of all the amazing things they can do.'

Chase "Kilk" Mitchell has been an esports Tournament Organiser and Manager for many years. Now, he is the Owner and CEO of Crimson Wings, and also the Owner and Commissioner of the Women's Car Ball Championship (WCBC). The WCBC is organised by Crimson Wings and sponsored by Psyonix and has created a flourishing Rocket League community for and by women.

GGRecon interviewed Kilk and got to know the women’s Rocket League scene from an insider’s perspective.

What do you want to accomplish with the WCBC?

Our goal in the WCBC is to give women a place to play competitively and grow their skills, so they can one day make the RLCS themselves. We aim to increase the number of women in professional esports and give all women a safe place to play games free of the toxicity they face every day in the gaming world. So far, we have been successful in creating this space, and many of the women involved in the league have vastly expanded their skills. I would say the league is a success, but there is much more to do.

The WCBC has now run for three seasons. What have you learned so far?

I have learned that the discrimination and toxicity women face is much worse than I could have ever dreamt of. The things they deal with on a daily basis is unreal. I don't think many people understand exactly what women deal with every day.

What's your fondest memory from the past three seasons?

I think my fondest memory was when the Kansas City Pioneers made the dive into the league and picked up Phantasmal.

Kilk is referring to Courtney "Courtney" Johnson, kate, and Queen B, who signed with the Kansas City Pioneers at the end of January. The Pioneers used to host a team in the RLCS too, but they are still active in Rocket League by supporting this team and multiple content creators.

What's the biggest issue the WCBC has to face?

Scheduling! We have to make sure our players do not have to choose between playing in our league and playing in the RLCS qualifiers. Because Psyonix has so many events, this can be difficult.

What's the next step? What does the women's scene need to grow?

Of all the people you work with, who inspires you the most?

It has to be Freya. She is our Lead Graphics designer, and she brings this whole thing to life with the quality of work she puts on and the number of hours she puts in. Without her, the WCBC would not be as successful as it is,, and I am eternally grateful.

Womens Car Ball Championship
@WCBC_RL
As we come closer to the end of #WomensHistoryMonth
we know this series wouldn't be complete without featuring one of the most amazing women in the WCBC!
@freya_haze is a talented freelancer, WCBC production lead, and owner/player for @VenusVixensGG! 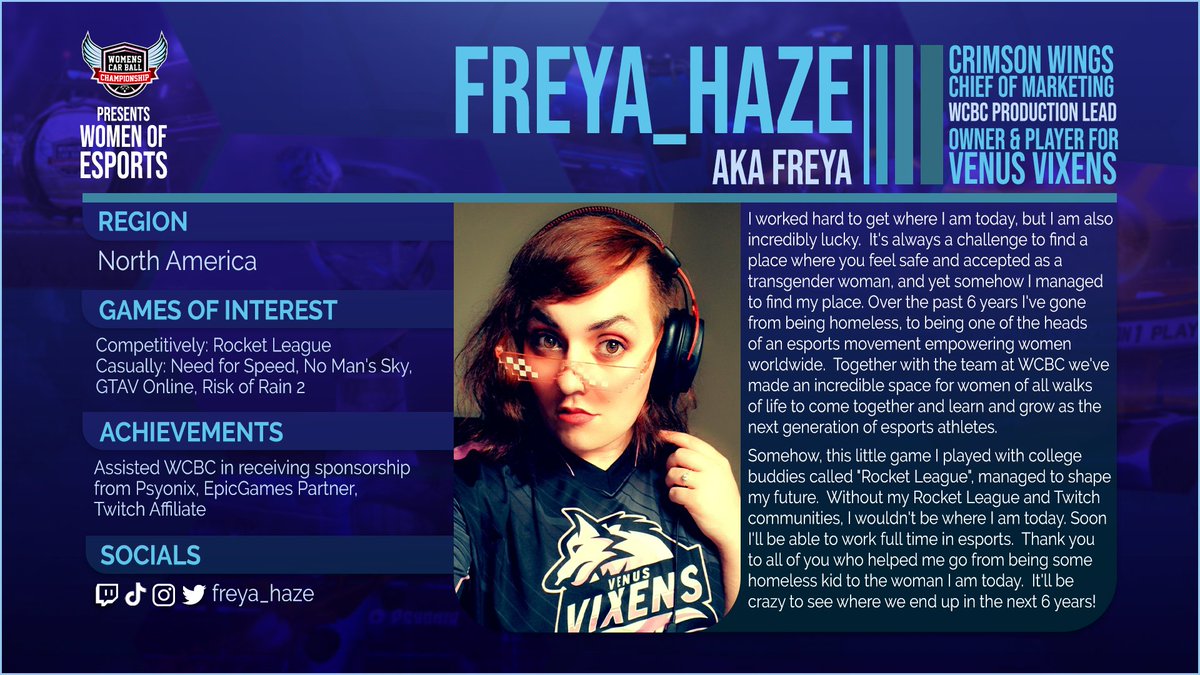 How can people who want to help get involved?

They can join the Discord server! We are always looking for great help. You can find the link in our twitter bio.