The PR disaster that was T1 LS.

T1 esports has had an up and down 2020, culminating in its latest appearance in the spotlight. The organisation has just recently reactivated both its Twitter account and Discord server, all because of its fans reaction, and the team’s handling of a supposed leak that Nick "LS" De Cesare would be joining as a coach.

The resulting fallout played out as a precautionary tale for how not to handle a leak of this magnitude, and what can happen when a team cannot reign in its fans. With its two major press releases in almost as many weeks, T1 painted itself into a corner and could not seem to make a right decision when it came to handling the public relations crisis from its fans and the League of Legends community as a whole.

Some context before jumping into the offseason. The T1 League of Legends team has been in a bit of a rut recently. The once-dominant team has missed out on two of the past three World Championships and had a rough end to their 2020. The team got beat by Gen.G for the last spot as the LCK’s seed in the regional gauntlet and was already under fire from fans for its recent collaboration with Korean pop group BTS and benching Lee "Faker" Sang-hyeok for a large portion of the Summer Split.

While the recent collaboration was a general win for the team’s brand, fans criticised the decision because they thought it took away from time that the players could have spent practising for the gauntlet. As for the Faker benching, every time the greatest player of all time gets benched people are going to get mad.

LS, before the leak, was at the highest point he had arguably been in his career. He had just wrapped up casting some of the World Championships and was still successful as a content creator and player-coach. But, in the eyes of many of the Korean fans, LS was still on shaky ground.

The year before he had come under fire for his defence of Sebastian "Malice" Edholm, a jungler in the team that he was coaching at the time. The player had had some toxic solo queue moments and also did not seem to gel with the bbq Oliver organisation that well, airing his grievances on Twitter with the organisation doing the same. LS came out and defended the player that he had personally vouched for and would eventually walk back some of his defences after talking it out with all parties involved.

While the American did save face, and retained much of his status in the LCK and with the bbq Oliver players, in the eyes of many Korean fans, he was an outsider with a track record of antagonisation.

The Leak and The Aftermath

Like many leaks from esports past, LS to T1 was leaked in stream by Lee "Effort" Sang-ho. He opened up a Discord message that apparently was ushering in LS and Choi “Polt” Seong-hun as the organisations newest coaches.

This led to a firestorm of overactions from fans, with some antics that make jersey burning look tame. They sent flowers to the T1 headquarters and had a truck drive around the building with a sign on the side that read “No future for a team that shuts out devoted fans” and “We, SKT T1 fans, demand a clear and detailed explanation from top management.”

Some fans even went as far as harassing his Grandmother and personally attacking LS online. Eventually, LS had to deactivate all of his social media accounts and has not been back since.

This, unsurprisingly, made T1 uncomfortable so the team released its first statement calling for patience and time as the organisation discussed its future. 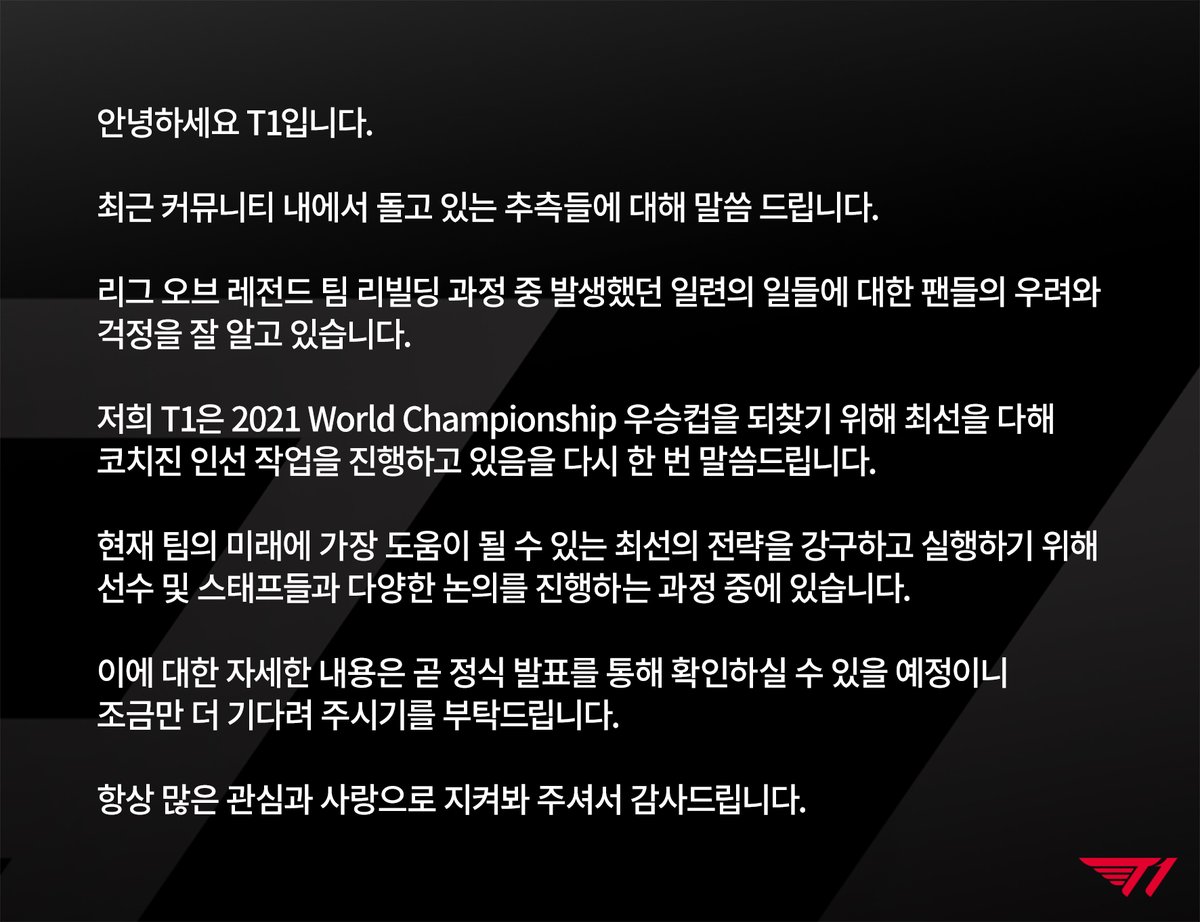 But this only fanned the flames of the fans' fury and continued to cause bad publicity for the flailing esports company.

T1 eventually had to unveil its new coaching roster and, unsurprisingly, it was announced without any mention of LS or the harassment he or the organisation had received.

At this point, the saga seemed to have come to its natural conclusion, albeit without a statement from LS himself. But, the crisis for T1 continued thanks to another leak. This time with chat logs that documents a moderator of the T1 Discord asking for guidance on what to do about the homophobic and racist discourse in the chat room about LS.

The response from the upper management from T1 was to let the comments persist without any moderation at all from the brand. This sent another shockwave through the League of Legends community as it seemed like the organisation actively allowed racist and homophobic slurs to be tossed around its own Discord about LS.

T1 was now trapped in a PR disaster from all sides, cornered by its own fans for a decision that it ultimately reneged on and cornered by everyone else for its lack of tact and content moderation when dealing with said fans actions.

After the chat logs surfaced the T1 Twitter and Discord went dark as it looked the organisation was trying to wipe the slate clean while also considering options for a formal response. That response did come, in the form of another press release by the team. 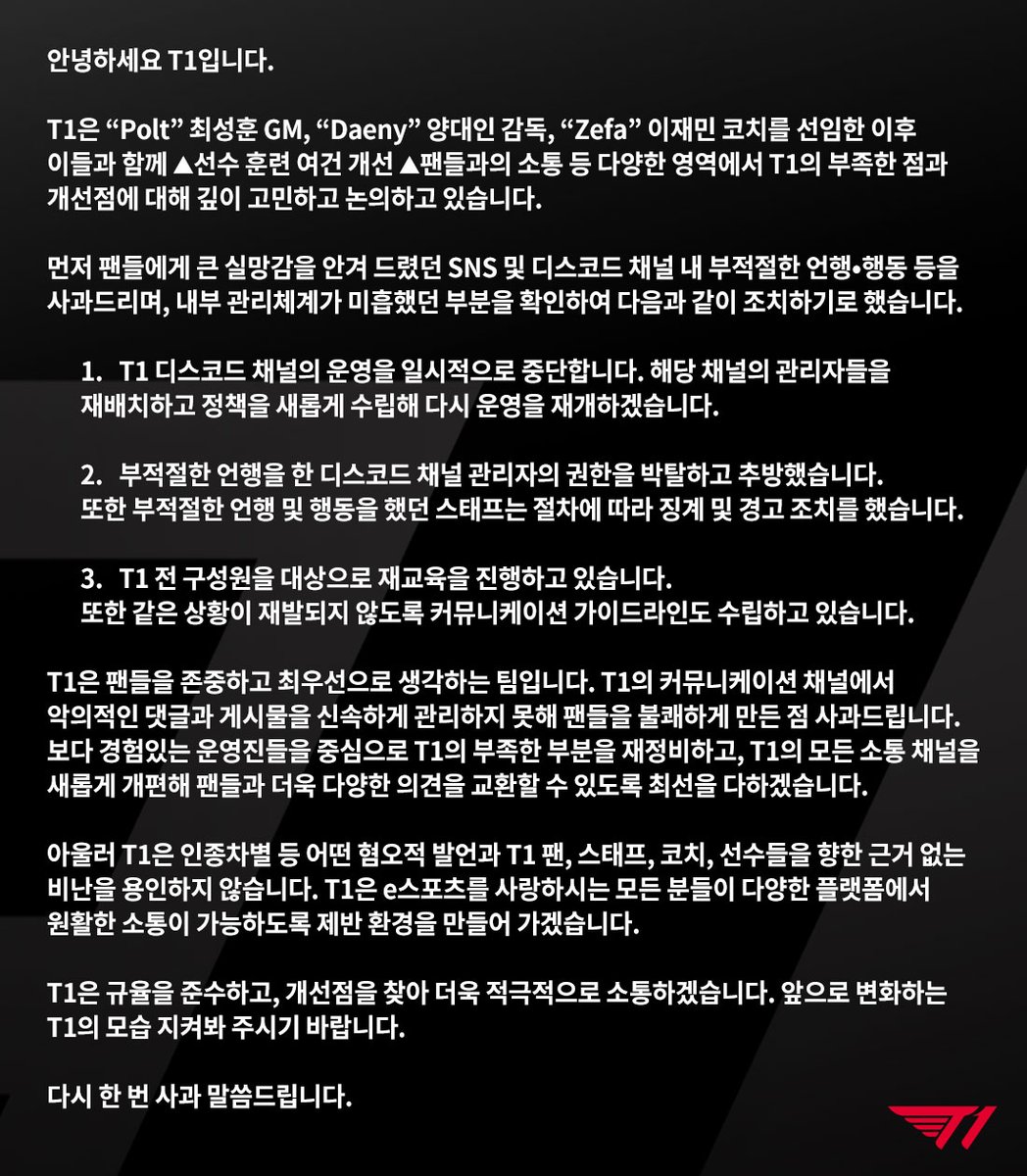 Fallout and What Will Happen Next

The release was not met with enthusiasm or forgiveness by many of the organisation’s and general League of Legends alike. The hollow response to a complicated situation felt more like an indictment on everyone but T1 and has left everyone involved with a bad taste in their mouth.

But, this is ultimately the classic way to respond to a public relations crisis of this magnitude. Deflect as much blame as possible, while also acknowledging your own part in what happened, and do not go into specifics as to what transpired in the official release. While it is a tactic in the industry, and has been proven to work in the long run, currently it has only seemed to make a bad situation worse and cause harm to almost everyone involved in this entire saga.

Then there is the question of how this will end. While T1 are definitely done with talking about the situation, until another unsavoury tidbit about the situation crops up, LS has yet to come forward and explain his side of the story. The only communication from the American about the situation has come from a friend who posted on Reddit that LS is not handling the news well and has no plans for the future in terms of a response, content creation or coaching.