RLCS X has seen its fair share of upsets.

RLCS X began as expected, with teams that had proven their dominance before continuing from exactly where they left off. The Fall Split saw a few upsets here and there, but for the most part, the top teams reminded everyone why they deserved their reputations. In Europe, Team BDS and Team Vitality were leaps and bounds ahead of the competition in Europe, combining to win all three of the Regionals and the Major, of course, going to BDS. In North America, it was much the same as Spacestation Gaming, NRG, and Team Envy took home the lion's share of trophies. However, with the new format enabling lower-ranked teams to prove themselves against elite teams has already shown they have what it takes.

As previously said, there were a few upsets here and there in the Fall Split. The Kansas City Pioneers managed to reach as high as fifth in the Circuit Point Standings in NA. In Europe, the fourth through eighth place teams all had their bright moments, but nothing to consistently break into the top tier of teams.

In the Winter Split, however, things began to change. For Europe, the first Regional saw BDS and Vitality still take first and second, respectively, but the signs were there that the top teams should watch their back. The second Regional saw a large number of upsets, as well as the first final without either BDS or Vitality. It would end up being Top Blokes vs Team Queso. Top Blokes walked through the upper bracket finals as they defeated other rising teams like Galaxy Racer, Team Queso, and eventually, Team BDS themselves.

Team Queso saw similar success. Early in the tournament, they swept Vitality while limiting their dangerous offence to three goals throughout the series. In the lower bracket, they swept the Giants as well, before taking down BDS. This tournament also saw teams like Redemption make waves in the scene as they earned three consecutive wins over teams like Solary, Guild Esports, and Dignitas.

The third Regional was just as exciting for those rooting for the underdog. WOO, in their first appearance in RLCS, started off with three straight victories. Another team that hasn't been given much attention in Denied took down Top Blokes and Team Queso in the lower bracket. Teams like Triple Trouble and Endpoint continued to be a thorn in the side for many of the top teams.

Specifically, the Grid in EU has been a fan's best friend as Team Singularity, and Dignitas have won their first trophies of the season. Vitality and BDS are only ranked 9th and 10th respectively in the Grid. Not only that, they haven't reached the finals with teams like Endpoint and Galaxy Racer making final's appearances. 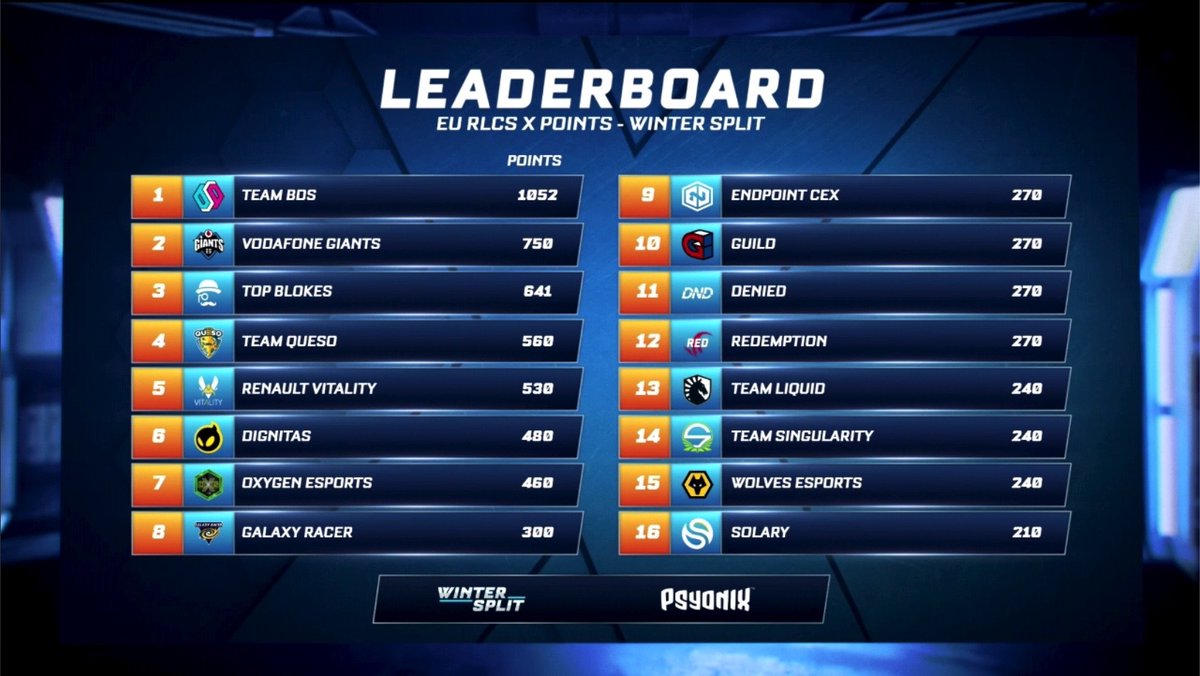 In North America, the dominance of teams like Spacestation Gaming and NRG is long gone. They are still winning series and earning high results, as all three still sit in the top four, but their results have been much harder to earn. For example, the second Winter Regional saw SSG, the eventual finalists, fall to the lower bracket before winning a single series as Alpine took them down, one of this year's fan favourites.

The first Regional was even more stressful, though, as both SSG and NRG got knocked out in their first games. NRG would make a lower-bracket run to the finals, but SSG would fall only two series later to the Pittsburgh Knights. The best example of parity developing in NA has been the Grid, most specifically, Week 3. Jamal Jabary were the talk of the town after the group stage as they went 3-0, including beating NRG 3-1. In the first round of the playoffs, NRG would then be knocked out by the Susquehanna Soniqs. The Kansas City Pioneers took down SSG in five, and almost did the same to Team Envy. It was the Peeps, however, who would make the biggest scene. They would take down G2 Esports and Rogue before finally eliminating Team Envy in the finals.

All of this said, it is obvious that the top teams have some new challengers. Especially in NA, the top teams can still put the underdogs in their place, but the underdogs have been fighting harder and harder. In EU, Vitality has been replaced by Giants for second place, and teams like Team Queso and Galaxy Racer are rising fast. Oxygen Esports and Dignitas are also playing up to expectations, adding another hurdle for the top teams to retain their spot.

As exciting as these upsets are to see, they shouldn't surprise fans. As mentioned at the very start of RLCS X, this season is going to see a lot more Rocket League gameplay than before. In the previous format, teams would only play nine regular-season series, and the underdogs wouldn't even get a chance to play the top teams as they would be grinding their way through the Rival Series. Now, teams play nine series every two weeks. This exposure to high-level Rocket League gameplay is a key catalyst for teams to develop. Not only are the teams getting more playing time, but it is against the top teams in the world. With the way seeding works, the best teams are always getting matched against the worst teams, giving them chances to prove their mettle against the best of the best.

It will be exciting to see how the upcoming Major unfurls, as all of this extra exposure to high-level play has obviously benefited many teams. Even Team BDS, who have still been the best team in EU, have been upset here and there. In NA, the top four are holding on, but the cluster of four to eight teams behind them have been on the verge of a breakout. It feels like only a matter of time before results like Top Blokes vs Team Queso is more commonplace.