Ninjas in Pyjamas debut their star-studded lineup at the WePlay! Invitational

Ninjas in Pyjamas were one of the first teams to enter the early VALORANT esports space and their most recent moves speak towards their future in the game. Sending a letter of intent to the European scene, Ninjas in Pyjamas has retooled their roster and signed some of Europe’s hottest free agents, many of whom have played alongside one other in the past.

Stitching together bits of the Prodigy mix as well as HypHypHyp, Ninjas in Pyjamas come into the WePlay! Invitational as title contenders alongside the likes of G2 Esports and fish123 - and with a roster this talented, how could they not be considered as such? 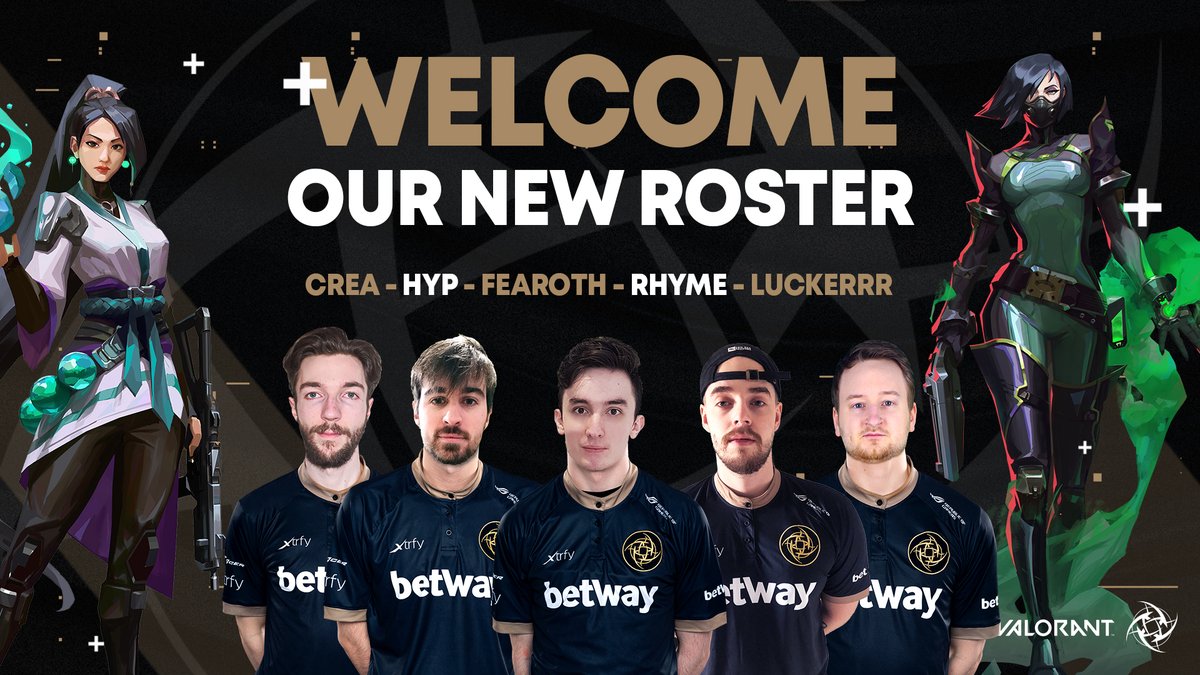 Not only is former professional Overwatch League player Damien "HyP" Souville a talented marksman, but he’s known to be quiet the strategist. Alongside critically acclaimed Overwatch Contenders roster, Eagle Gaming, HyP was a vocal leader in the team and in essence, becoming an arm for the coaching staff within the team. With that kind of attention is was no surprise when he made his way into the Overwatch League on the Paris Eternal. With extensive experience not only as a pro gamer, but playing at the highest level in his field, HyP brings some of the best leadership money can buy. However, that doesn’t mean he can’t hang with the best of them. HyP recently lead Prodigy to a respectful second-place finish at the Vitality European Open and previous lead his own team, HypHypHyp, to success in the early European VALORANT scene.

Like many VALORANT hopefuls, Niels "luckeRRR" Jasiek comes from an extensive background in Counter-Strike: Global Offensive (CS:GO). Dating back to 2016, luckeRRR has played for teams like BIG and Fnatic Academy before making the move to VALORANT. As one of the first signings NiP did as they retooled their VALORANT roster, luckeRRR brings another form of veteran presence. The other half of that initial move is one of the Ninjas in Pyjamas standout players, Emir "rhyme" Muminovic, who came alive during the Vitality European Open playing under the Prodigy banner.

Charles "CREA" Beauvois is another player who carries over some experience with CS:GO. CREA played alongside dizLown in the French Counter-Strike scene for a good stretch of 2018. Enzo "Fearoth" Mestari also comes from a CS:GO background with experience on teams like Asterion and Smoke Criminals. While their roads to VALORANT might have been different, they both played within the promising European team captained by Hyp, aptly named - HypHypHyp. While it is difficult to say how this new Ninjas in Pyjamas lineup will operate, we can extrapolate on how things might play out by reviewing how Prodigy performed at the Vitality European Open.

One thing that played out quite often on both Bind and Ascent was HyP’s preference to entry frag. Either on Reyna or Raze, Hyp will likely be the spearhead for this team on their offensive rounds. However, he isn’t the only person that we’ve seen within this core of players that has shown a willingness to entry frag as rhyme will take some rare opportunities for aggressive peaks and jabs at the defence.

That said, it’s usually the case that HyP enters the fight first, while rhyme follows up with the trade. This is a great clip of HyP coordinating alongside his team in a B Site execute on Bind. He is first to peak through Hookah, this sets up his ally to clear the angles leading into B Long and sets up the two-pronged push into B Site. Throughout the entire event, Hyp played an important role in his team’s executes as a fearless spearhead, entry fragging into each site.

Another thing we can glean from their past together is that luckeRRR could possibly continue to be the team’s primary Operator while Fearoth moves to flex on double Operator setups. However, luckeRRR isn’t the type of player that is bound to the weapon, his rifle is just as strong. In this clip against FABRIKEN, he not only finds the trade as Prodigy attacks A Site, but he’s also able to switch guns and win a key duel to secure the bomb plant. His positioning is important to note as well as he’s usually 3rd or 4th in line to peak into an angle, which makes sense due to his tendency to play Sage.

We mentioned previously that rhyme came alive at the Vitality European Open and while there isn’t a shortage of clips that showcase the sheer firepower he brings to the NiP lineup, this clip against G2 Esports in the grand finals encapsulates what he can become in the future. Staring down the barrel of a 2-on-1 clutch with seconds remaining on the clock, rhyme has the presence of mind to correctly shoulder peak the Operator sitting behind the box, plant the bomb and outplay one of the best players in Europe at the moment. This kind of clinical play is what we can expect from rhyme during the WePlay! Invitational.

With the additions of CREA and Fearoth, two players that made a name for themselves as standouts on HypHypHyp, you can start to see how stacked this roster actually is. CREA was easily one of the most explosive players on HypHypHyp in their run towards the end of June. His consistency is the glue that ties this whole team together into one scary package.

On little to no practice and in a mixed team, Hyp, luckeRRR, and rhyme lead the core of Prodigy to a strong showing in multiple matches against G2 Esports at the Vitality European Open which ultimately earned them a respectful second-place finish. Now that the lineup has been solidified under the Ninjas in Pyjamas banner, the world is their oyster. With time to practice and prepare, Ninjas in Pyjamas have to be contenders for the title at the upcoming WePlay! Invitational. Ninjas in Pyjamas will be a staple in the European VALORANT scene with this roster, you can count on it.

WePlay! VALORANT Invitational: Schedules, Standings, Results, Recaps & Interviews
More
Valorant
VALORANT Killjoy Abilities: First Impressions Remain Moderately...
The time has finally come - Killjoy has been out in ranked play for a minute, and everyone’s first [ ... ]
Valorant
Team Liquid Sign Fish123 VALORANT Roster
Team Liquid have signed the entire Fish123 VALORANT roster, following on from the young team's second-place [ ... ]
Valorant
What's One Or A 100 Thieves Ought To Do?
100 Thieves’ VALORANT roster has gotten themselves in a bit of a pickle. Since June, the team [ ... ]
Valorant
FaZe's VALORANT Roster Boasts Ridiculous Skills And Personalities
FaZe recently announced VALORANT roster features four former Overwatch League professionals, some with [ ... ]
Valorant
What Are The Sentinels Doing Differently In VALORANT?
After a quiet entrance, the VALORANT esports space cannot deny the Sentinels any longer. With their [ ... ]
Valorant
Riot Games Has Disabled Killjoy For The VALORANT Invitational
While Killjoy has only just landed in VALORANT, she's already preparing to take a break as [ ... ]
Valorant
FaZe Clan Signs BabyBay To VALORANT Roster
Just days after Counter-Strike: Global Offensive favourite Jason "JasonR" Ruchelski [ ... ]
Valorant
Bonk Coach Salah: Ambition, Creating A New Style & Becoming...
The European VALORANT space is fluctuating, and Bonk is leading the charge. Filled with familiar faces [ ... ]
Valorant
Allied Esports Announces $15,000 European VALORANT Ignition...
Allied Esports has announced a European VALORANT Ignition Series featuring G2, NiP, Fish123, Vodafone [ ... ]
Valorant
Maksym Bilonogov On The WePlay! VALORANT Invitational And The...
This year hasn't had many highlights so far, let's face it. To be fair, there have been [ ... ]
Valorant
VALORANT Update Includes Feature That'll Inform You If Disruptive...
Expect some swift judgement when it comes to VALORANT thanks to a new feature that will tell [ ... ]
Valorant
Investigation: Why Aren’t EU Organisations Signing VALORANT...
Out of the 32 teams that made it to the main event of the latest Ignition Series in Europe, the Mandatory [ ... ]
Valorant
Riot Games Announces Act 2 Battlepass, Skins And Deathmatch...
With Act 2 just around the corner, Riot Games has announced what players can expect from the [ ... ]
Valorant
hoody Officially Steps Down From HAVU To Move On To VALORANT...
VALORANT fanatic Aaro "hoody" Peltokangas has officially stepped down from [ ... ]
Valorant
Learning From Sinatraa: Should Everyone Be Using LMGs?
When VALORANT came out, it looked and felt shockingly like Counter-Strike in a whole myriad of ways. [ ... ]
Valorant
davidp Completes G2 Esports VALORANT Roster
After being announced as the stand-in on the G2 Esports team for the Vitality European Open and [ ... ]
Valorant
Ignition Series x Mandatory.GG Cup Starts Tonight
Let's get ready to rumble as VALORANT's Mandatory.GG Cup returns to Europe as part of the [ ... ]
Valorant
Who The Best NA VALORANT Team Is And Why It Doesn't Matter
If you’re wondering why some of your favourite content creators are currently not releasing their [ ... ]
Valorant
VALORANT Players Find Easier Way To Complete Weekly Missions
Those crafty VALORANT  players are at it again and one fan thinks they've found an [ ... ]
Valorant
The TenZ Carry Threshold By The Numbers
After Cloud9’s recent performance at the PAX Invitational, there’s no argument that the [ ... ]
Valorant
Four Things We Learned At VALORANT’s PAX Arena Invitational
The North American VALORANT scene has been white-hot with densely packed tournaments featuring the ever-growing [ ... ]
Valorant
Killjoy Against The Zealots Of Pure Skill Church
When the new abilities of the 12th VALORANT agent Killjoy leaked, we didn’t have to wait long [ ... ]
Valorant
FaZe Clan Partner With Riot Games To Host The Biggest Event...
Hosting 16 North American teams, FaZe Clan and Riot Games will host their own Ignition Series tournament, [ ... ]
Valorant
Riot Games Accidentally Reveals VALORANT Agent Killjoy Early,...
Get ready for a brand new fan-favourite as VALORANT has just leaked Agent Killjoy. Someone at Riot [ ... ]
Valorant
VALORANT Players Discover New Hack That Allows Them To See Through...
The smoke is clearing as players have discovered a sneaky VALORANT  hack that allows [ ... ]
Valorant
Putting Players First: Why Tournament Organisers Are Failing...
It’s no secret that VALORANT is thriving. Merely two months after the release of Riot Games’ [ ... ]
Valorant
VALORANT Releases A New Ranked System For Competitive
Heading into Act II of VALORANT, a new ranked system has been introduced for the competitive mode. Act [ ... ]
Valorant
VALORANT Players Have Found A Way To Make Their Character Stutter
While stuttering is one of the most annoying parts of any game, a sneaky VALORANT fan has figured [ ... ]
Valorant
Orgless vs. Orgful - Team Culture Differences In VALORANT
While VALORANT has hardly got a storied history behind it, at this point it is safe to say that the [ ... ]
Valorant
Professional Team Vibes - PAX Arena Invitational Playoff Primer
Another weekend, another stop for the Riot Games’ IGNITION SERIES. This time we turn to North [ ... ]
Esports Calendar
pubg
PUBG Continental S2 North America
The 2020 PUBG Continental Series
rocket league
RLCS X Fall Split Regional 1
Fall Split Regional Events (NA/EU) August - October
league of legends
2020 LoL Pro League Summer
rocket league
RLCS X Fall Split Regional 1
Fall Split Regional Events (NA/EU) August - October
rainbow 6
2020 Six August Major (LATAM)
The revamped Six August 2020 Major (LATAM) August 7 to 9
overwatch
Overwatch League - Week 27
Blizzard brings us another week of OWL action. August 8 to 10
overwatch
Overwatch League - Week 27
Blizzard brings us another week of OWL action. August 8 to 10
RLCS X Fall Split Regional 1
Fall Split Regional Events (NA/EU) August - October
rocket league
overwatch
Overwatch League - Countdown Cup - NA Final
rainbow 6
2020 Six August Major (NA)
Semi-finals of the NA Six August Major
overwatch
Overwatch League - Week 28
Blizzard brings us another week of OWL action.
overwatch
Overwatch League - Week 28
Blizzard brings us another week of OWL action.
This website uses cookies
Cookies help us and our partners provide statistics. By browsing this website, you consent to the use of cookies in accordance with our Privacy Policy and Cookies Policy.
Accept & Close