The standard is set in the RLCS.

For any esports player, reaching the top is everyone’s ultimate goal. It’s what separates the good from the great, it’s no easy task. Staying on the top for multiple events, months, or even years is another ballpark, a showcase of excellence and consistency in a highly competitive field. All the while, having great individual performances is the cherry on top, for many its a dream. But for Alexandre "Kaydop" Courant, it’s the reality he has lived for over three years now, and we’re here to examine his prolonged and ongoing period of greatness, and the standard one must strive to even be called better than him.

After a mediocre 5th-6th finish at the RLCS Season Two Finals in Amsterdam with Sikii & Skyline, Kaydop was quick to leave and form an alliance with fellow French player FairyPeak!. After trying out a variety of third members, the duo would settle on Miztik for RLCS Season Three as they got signed by Mock-it Esports. What followed was weeks and months of domination in the weekly cups, never placing below the top four and winning a majority of Gfinity & ESL titles. While RLCS league play was a shaky affair, Kaydop would be 2nd in the league for both goals and saves as Mock-it managed 5th. And comes the regional championship, winnings over Pocket Aces, league leaders Northern Gaming and then reigning world champions Flipsid3 Tactics saw Mock-it crowned champions of Europe.

That statement would also be champions of the world if it weren’t for a valiant lower bracket run by Northern Gaming at the season three finals. As Remkoe finally ascended above the bronze medal, Deevo re-defined what was possible in Rocket League and a certain substantiate called Turbopolsa announced himself, their combined efforts overcame Mock-it in two Bo7s to become world champions. For Kaydop, he had come close but was only just getting started.

Like the previous season, Kaydop would leave his side and form an alliance with one of the top players in the game, this time ViolentPanda. Turbopolsa was later added as he sought to be a full-time starter and the rest is history. Out of the next six 3v3 LANs in 2017, the trio represented Gale Force as they made five Grand Finals, ultimately being victorious at the RLCS season four world championship. As GFE established themselves as THE elite team, Kaydop was hailed as THE elite player, his 2v2 Universal Open success and spring split MVP over two times world champion Turbo put him in the discussion for best player in the world. And apart from an inspired run of form by Canadian Jknaps over Christmas of 2017, no one would touch Kaydop for the next twelve months.

A small slip up at Dreamhack Leipzig aside, 2018 was the year of Kaydop. European Champion and European MVP in RLCS season five, the dynasty now under Dignitas seemed primed to go back to back as world champions. However underwhelming showings from Kaydop the first two days of competition saw Dignitas sent to the lower bracket by NA titans NRG. What followed was the start of a seventeen series winning streak in the RLCS by Dignitas, as they fought through the lower bracket to go back to back as world champions. The crowd wanted to know if Kaydop could score a goal, and he did a lot of that, so much so that despite his poor first two days, Kaydop was crowned the MVP of the world championship.

Another LAN win would follow soon after in Northern Arena as Dignitas added to their RLCS win streak with an offline win streak of twelve consecutive LAN series wins. Individually, Kaydop would get pipped to golden striker and EU MVP but when his side was breaking RLCS records that may never be topped, I doubt he loses sleep at night over it. A record fourth consecutive regional championship win was complimented by a fourth consecutive world finals appearance, however, Cloud9’s even bigger tear through the lower bracket would quite literally end the dynasty in two dominant best of sevens. A 3rd equally dominant loss to C9 at the ELEAGUE invitational semi-finals was the last dance, as Kaydop having done all there is to do at Dignitas with a multitude of records broken both individually and on a team level, would shake the landscape of RLesports’ scene yet again.

Vitality and the French Takeover

🐝 Team Vitality 🐝
@TeamVitality
Our 1st @RLEsports year has been filled with ups & downs. In 2019, we want our @RenaultSportF1 Team Vitality squad to reach & stay at the top all season long 💪
To achieve that, we're welcoming a champion who proved its worth with @Dignitas: the talented and experienced @Kaydops 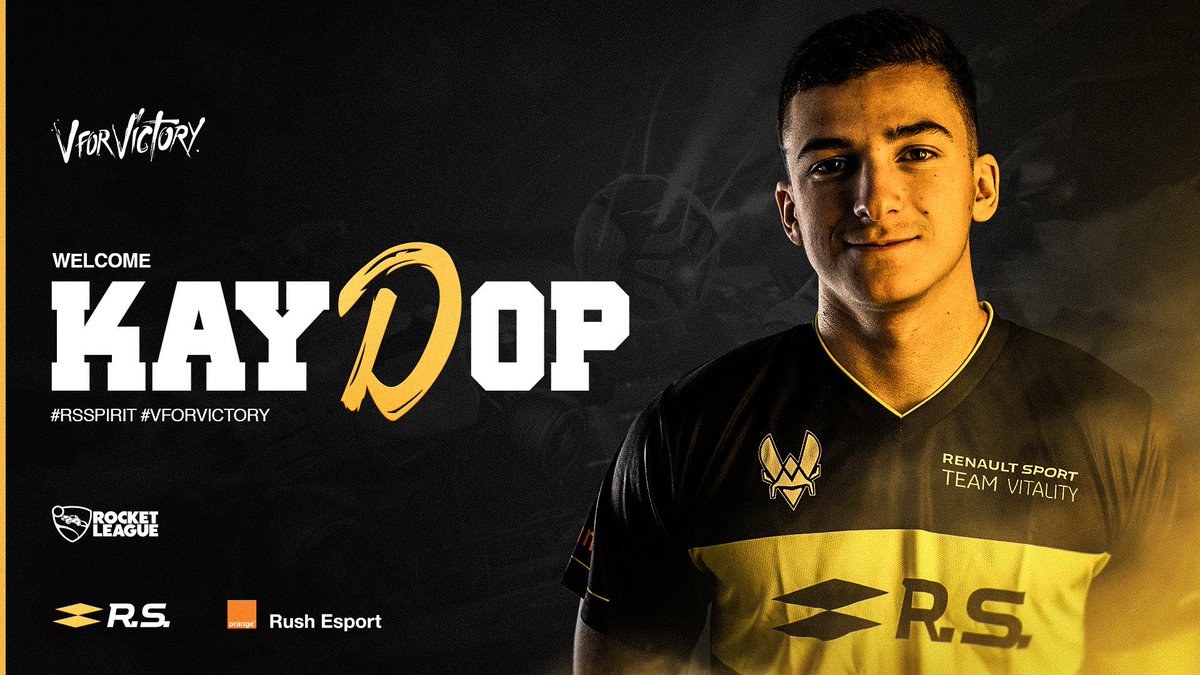 On January 13th of 2019, Kaydop would depart the dynastic Dignitas to join French organization Renault Vitality. Now reunited with best friend FairyPeak!, and with hot prodigy Scrubkilla under his wing, success for Vitality seemed inevitable, and 2019 was full of it. A 5th European regional championship and a 3rd RLCS world championship came in season seven, with two further LAN grand finals appearances and two further appearances on Dreamhack Championship Sundays cemented Vitality as one of the world’s elite. It was such a talented squad that Kaydop wasn’t even the main player on his team no more, rather his reliable consistent presence instilled some much-needed confidence in FairyPeak! And Scrubkilla, the latter claiming MVP at the RLCS finals success in New Jersey.

Kaydop’s streak of regional championship victories would come to an end at the hands of Team Reciprocity, and in the race for the record-breaking 4th world championship, Turbopolsa would reign supreme as NRG finally secured the crown in Madrid. While it was a disappointing end to 2019, in his least successful year in recent memory, Kaydop was ranked the 5th best player of 2019 by r/RocketLeagueEsports and still hadn’t missed the finals of any RLCS event, online or LAN since 2016. However despite a still good year, Kaydop has a ruthless streak that many competitors need to succeed.

2020 opened by the announcement that Vitality had not renewed Scrubkilla’s contract, and shortly afterwards, French prodigy Alpha54 had signed to form the French superteam. Memes popped up that Kaydop was always changing rosters if he couldn’t get 1st in the world and that letting go of Scrubkilla would be the end of Vitality. All doubters will quickly shut up as Vitality would top RLCS league play with an 8-1 record, and only fall to rivals Dignitas 4-2 in the regional finals. However, five weeks later in the Rocket League Spring Series, Vitality would enact revenge, sweeping Dignitas in the rematch to announce Vitality as the best trio in the world. While there has been no LAN to flex their powers, Vitality has lived up to the hype yet again, with Kaydop playing an integral role. 3rd in goals and 2nd in assists for RLCS season nine as Fairy literally peaks and Alpha moulds into an alpha, Kaydop remains on top of the RLesports scene and shows no signs of slowing down soon.

While he will always be compared to Turbopolsa for being short one world title, Kaydop matches the Swede in A tier+ event wins at eleven, with a higher average placing too, all while holding the moniker of Rocket League’s deadliest striker. In an esport as competitive as ever, Kaydop has been the guy for over three calendar years straight, Dignitas duo Turbo & ViolentPanda failed to make LAN in season seven, NA titans GarrettG & Jstn could only wish to match his LAN success and European regional Champions Reciprocity & Dignitas only remained on top for weeks at best before Kaydop & Vitality reclaimed the throne. And over his years of dominance, many more a player have flat out retired, it just goes to show that one of Rocket League’s most popular sayings is a fact: You can’t stop the Kaydop.