Dafran lashed out at Hyp after the Frenchman's team had been given a one map advantage for dafran's team missing the game's start time.

The popular Danish VALORANT streamer and ex-Overwatch pro player Daniel "dafran" Francesca has been hit with a lifetime ban from all tournaments organised by Solary, a french organisation with teams and tournaments in multiple games. Dafran has a long history of bad behaviour in other games, and while he has shown signs in the past of being reformed to some degree, and even good sportsmanship during his brief stint in the Overwatch League, this incident seems to have brought out some of his past aggression. 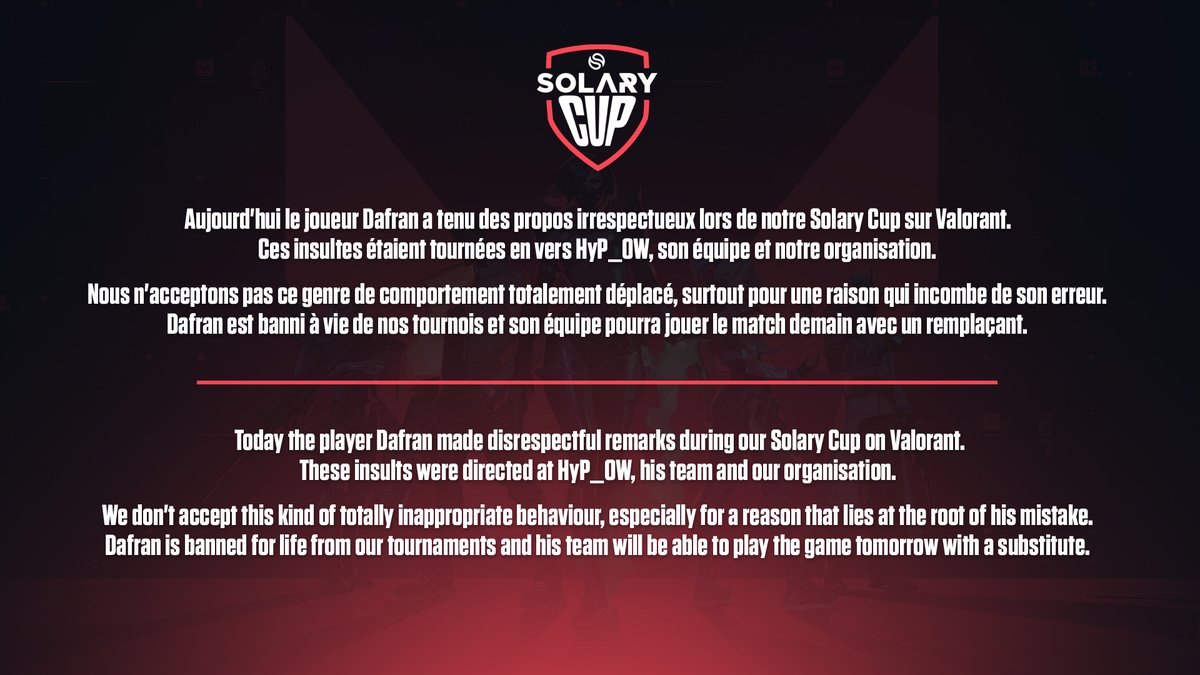 In a tweet the tournament organizer cites “disrespectful remarks” that dafran made towards Damien "HyP" Souville, another ex-pro from Overwatch, and his team in the Solary Tournament. Dafran was streaming his perspective for the tournament at the time, and the remarks that have since been clipped by the community include a whisper directly to Hyp saying “f**k your mom” and him also commenting that “they are p*****s too scared to play”. Dafran also lashed out against the organiser directly, saying that “the Solary Tournament is a d*****t tournament, everyone knows that now”.

The altercation started when dafran’s team, Prodigy, was more than 40 minutes late to a semi-final match against Hyp’s team.

They took action by conferring with Solary to make sure Prodigy started down one map, to which dafran responded with the initial offensive whisper to Hyp in the VALORANT game client. Another Prodigy player, m1xwell, stated on stream that “we were late, we didn't know, because nobody told us. The other team was tweeting out that we were late, and people don’t respect the time, and s**t, and we’re one map down … and dafran just, didn’t wanna play, because if we’re one map down, it’s f*****g absurd, and s**t”. In response to dafran’s lashing out against Hyp, Solary informed the team privately that they could play a rescheduled game with the map disadvantage, but because of dafran’s comment, he could not play with the team, and they would have to find a substitute. Hours later, after waiting in the game lobby appealing this decision, Solary released the above statement on twitter, making their ruling public and official. Dafran responded by doubling down on the vitriol, condemning the organisation, and personally insulting Hyp and his entire team again:

On stream, dafran fired off more strong remarks that indicated his distaste towards Hyp’s team refusing to play against him, saying that they are “too scared”. His remarks then devolved into additional personal insults against Hyp directly, stating that “if Hyp actually does this, he will forever be known as a b***h. If he goes against me, and wins, he will gain respect. He’s too small-brained, he’s an idiot, he’s washed up, he has no IQ, he’s actually just stupid, and he’s a trash dude. He had to retire from Overwatch League because he’s bad, and he comes to VALORANT and he’s bad here too”. Among these remarks it became clear that dafran took the accusation of lateness against his team to be fraudulent and cowardly, made so that Hyp’s team would not have to face him in the tournament. He mentioned that Hyp’s accusation revolved around Prodigy being late “because [he] had to go eat dinner, but actually [he’s] just being a f*****g b***h, and [doesn't] want to play against [us]”.

As of writing this article, neither Hyp nor Solary have responded to requests for comment on the situation. It is unclear how the tournament will conclude, if Prodigy will play without dafran, or if he will face repercussions among other tournament organisers too.

GGRecon will update the story as it develops.