Everything you need to know from what happened at the Call of Duty League Florida Mutineers Home Series.

The Florida Mutineers host this week's Call of Duty League Home Series, looking to take advantage of some big teams being absent to push themselves to top of the league table with a victory. Played online, the Florida Home Series contains rival teams meeting up, a scrap for points in the playoff places, and the chance to see some underdogs flourish; it's set to be another incredible week of CDL.

The first day of the Florida Mutineers Home Series has concluded in relatively disappointing fashion. Day one was set up to feature some great and thrilling matches but ended up being blowout after blowout with the exception of one match. However, there was one upset that has shaken up the bracket pretty interestingly.

Friday began with the Atlanta FaZe defeating the Paris Legion by a score of 3-1. While the end result might not look too close, Paris put up a fight in the Search and Destroy, taking FaZe to round 11. Though, the rest of the series didn't go Paris' as Atlanta took care of business. It is worth noting, however, that FaZe hasn't looked as strong as they did at the start of the season.

Next, we had our one close match of the day with London defeating OpTic Gaming 3-2. The final map count looks intriguing but the matches weren't too close with the exception of the final Search and Destroy, which saw the Royal Ravens' Sean "Seany" O'Connor clutch up to defeat OpTic. The match that followed London's win was the one upset of the day, as Toronto took down New York 3-1. This wasn't a huge upset given how the Subliners have played recently but it's still unexpected as Toronto hasn't won many big games this year.

In the last match of the day, we had the marquee matchup of the Minnesota Rokkr and Florida Mutineers. Many were predicting a close and exciting match but it couldn't have gone any differently. The Rokkr smoked the Mutineers 3-0 with the only close map being the Domination. Perhaps this is the tournament the Rokkr can finally make it to the Grand Finals.

Well, the second day of the Flordia Mutineers Home Series was one for the record books. However, the Call of Duty League may want everyone to forget about the day pretty quickly. Some controversy brewed in the first match of Saturday and continued on for the remainder of the matches.

The controversy started with the first game of the day between the London Royal Ravens and Atlanta FaZe. To sum it up, one of the London players, Matthew "Skrapz" Marshall, had left his set-up right as the first Hardpoint was getting underway. Of course, with the new online format, it's difficult for players to know exactly when a game is starting. Since Skrapz wasn't playing to start, many of the Royal Ravens' players didn't move and thought the match would be restarted. However, the CDL officials ruled that the match be continued even with the strange start. This led to FaZe easily securing the map and ended up with a 3-1 series victory.

Later in the day, however, a similar situation occurred between OpTic Gaming and Paris Legion. One player wasn't ready at the start of the first map but this time, the CDL officials ended the match and restarted. Naturally, this caused London fans and the community alike to be even more irate than they already were. It's clear that the CDL needs to clarify the rules a bit more and allow for more wiggle room with the new format in place.

In terms of the actual matches, nothing too exciting happened. Most series were a quick 3-0 sweep, with the others ending up in a 3-1 result. Though there were some notable upsets, as Toronto and New York took down Minnesota, earning them a spot in the semifinals. Also, OpTic Gaming defeated Paris 3-0 and have performed extraordinarily well this weekend following the decision to bench Jordan "Jkap" Kaplan. The semifinals feature Atlanta vs. New York and Toronto vs. OpTic Gaming. Championship Sunday will, hopefully, feature some entertaining matches and perhaps one or two more upsets.

Call of Duty League
@CODLeague
We have our final four at the Florida Home Series!
@ATLFaZe
New York @Subliners
@OpTicGaming Los Angeles
@TorontoUltra
Who do you have taking it all? Subscribe, turn on notifications, and join us tomorrow for CDL Sunday! 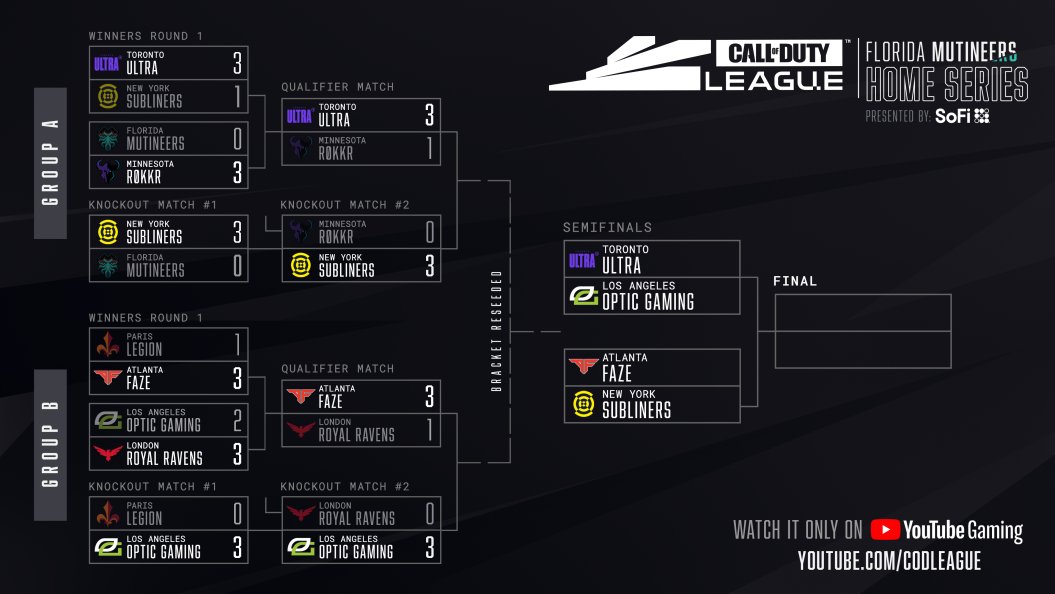 A champion has been crowned at the Florida Mutineers Home Series and it's a familiar sight. The Atlanta FaZe have captured their second overall championship as they dominated for most of this weekend's event. On Sunday, FaZe defeated the New York Subliners 3-2 in the semifinals and took down OpTic Gaming 3-1 for the tournament victory. Atlanta may have won those series, but both were fairly close overall, which could signify that other teams are catching up to the dominant FaZe roster.

Speaking of other teams, there were a few surprise squads that made waves during this event. The Toronto Ultra, New York Subliners, and OpTic Gaming all made it to their first semifinals and looked much better than in previous events. However, it was OpTic Gaming's run that was most impressive. The team benched Jkap for Martin "Chino" Chino earlier this week and it paid dividends, as OpTic reached its first finals. Though, some of this success could be attributed to the role swaps by players like Brandon "Dashy" Otell. It'll be interesting to see how OpTic moves forward after its most successful event.

The next Call of Duty League event takes place on May 22 as the Seattle Surge plays host for the first time. Stay tuned to GGRecon for all future CDL news and Home Series coverage!