Another open qualifier and only four spots remain. Who makes the cut?

After the return of a familiar dominance, the North American VALORANT space is heating up. Sentinels, one of North America’s long-standing success stories, made a definitive losers’ bracket run to win VALORANT’s Champions Tour (VCT) Challengers 1 and earn a direct seed into Challengers 2. They, alongside Immortals, XSET, and Luminosity Gaming, are one step closer to advancing to the next rung on the competitive VALORANT ladder. However, thousands of challengers stand hungry at the gate.

On February 10, those who cling to the hope of being among the elite few to make VALORANT history as the first class of Masters will be tested. Out of the litany of teams ready to make the climb, these are the four that are most likely to steal the show and advance from the VCT Challenger 2 Open Qualifier.

VALORANT Champions Tour
@ValorantEsports
@Hiko and @nitr0 have built something special with @100Thieves, watch them in action during First Strike: NA.
107
1407

While they missed the inaugural Challengers event, 100 Thieves looks to be back in form, hungry to make up for lost ground. The First Strike champions were deferred but not deterred. We’ve seen them battle with North America’s best and that is exactly the form you should expect from them as we approach the open qualifier for Challengers 2.

With Nicholas "nitr0" Cannella stepping back into the fold, they take an easy nod not only as one of the four teams to book their tickets through the open qualifier but as a team that is likely to make it out in first.

100T nitr0
@nitr0
I'll be competing again this Thursday for the VCT open qualifier for those who have been asking. âœŒï¸
90
4938

Nitr0 has been sorely missed as one of 100 Thieves’ consistent threats. Their frankly surprising loss to Carpe Noctum during the Round of 32 wouldn’t have happened with their full roster. If there was ever a time to hold the stocks, it would be now 100 Thieves. One oddball loss with a substitute, doesn’t mean the team is trending down and the Challengers 2 Open Qualifier will show that. 100 Thieves has had their fair share of ‘challenging’ teams in North America; their destiny sits in Masters.

Gen.G Esports
@GenG
GGs to @Sentinels!
We fall 1-2 in this match but rest assured we'll have all cylinders firing for the upcoming open qualifiers next week to qualify for VCT 2! #GenG 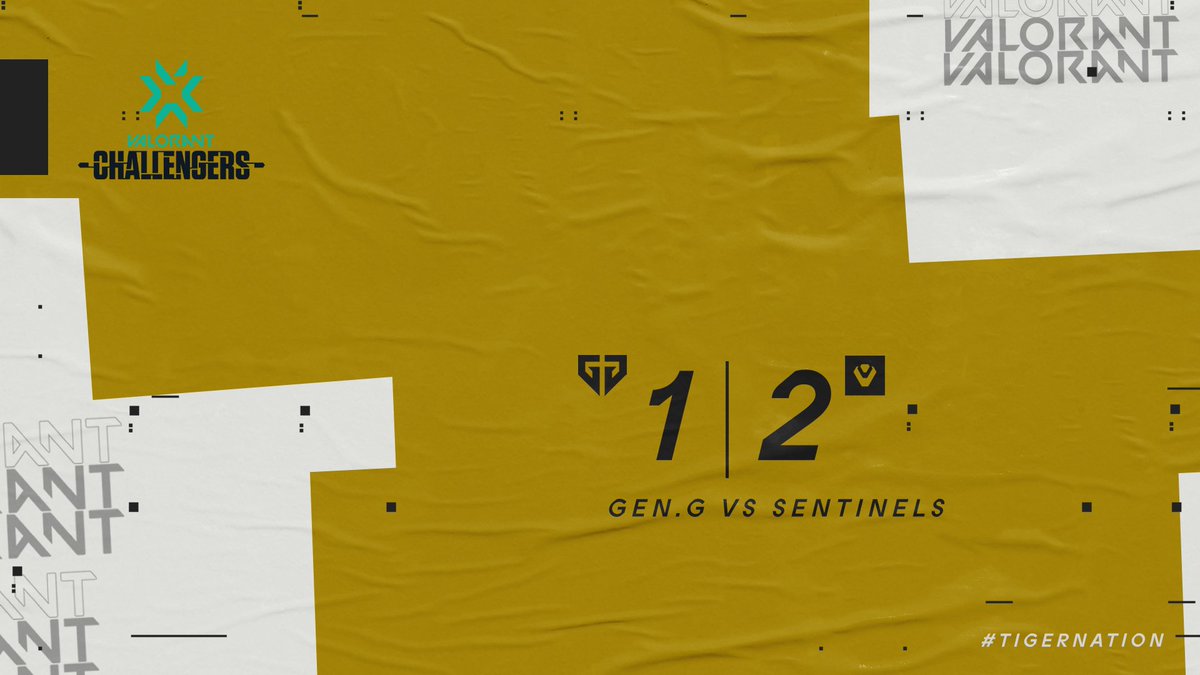 It’s hard to ignore two of the teams that narrowly missed making top four during Challengers 1 are going to miss another chance at Masters. Gen.G Esports and Team Envy both feel like shoe-ins to qualify for Challengers 2 and their track records only cement that as fact.

Gen.G Esports has seen a massive revitalisation over the last month. The end of 2020 hadn’t been too kind to them, but the new year has seen them return to form in a big way with some fresh faces. The addition of Kenneth "koosta" Suen has given the team a strong weapon, that over time, will only improve on the numbers he’s already been putting up. Against the toughest North America has to offer, koosta leads his team with 252 average combat score (ACS) with 163.0 average damage per round (ADR). Pair that kind of potential alongside their top five core and you start to see why they look to be likely candidates to advance to VCT Challengers 2.

Envy
@Envy
Lets go Austin! (btw Austin is @Crashies, I just call him by his first name because we are tight like that. Yeah I know top players, not a big deal to me lol)
10
361
Advertisement

One of North America’s mainstay teams, Team Envy will make it through the open qualifiers relatively unscathed. Throughout the majority of 2020, Team Envy was placed well, beating teams they should and almost never falling to a team viewed as below them. Methodical in their ways, Envy feels like a team that is just a tweak away from stepping into title contention and with some of their recent performances during the VALORANT Championship Tour, it is almost a formality at this point.

During their run through Challengers 1, Envy was lead by Austin "crashies" Roberts who had some impeccable showings against NRG Esports and XSET. To put his performance into context; crashies put up 294 ACS with a 226.3 ADR in a loss to XSET and in their win over NRG he managed a 301 ACS with a 174.6 ADR—by himself. If Team Envy can continue to facilitate his Sova, then they can easily battle back and nab a ticket to Challengers 2. 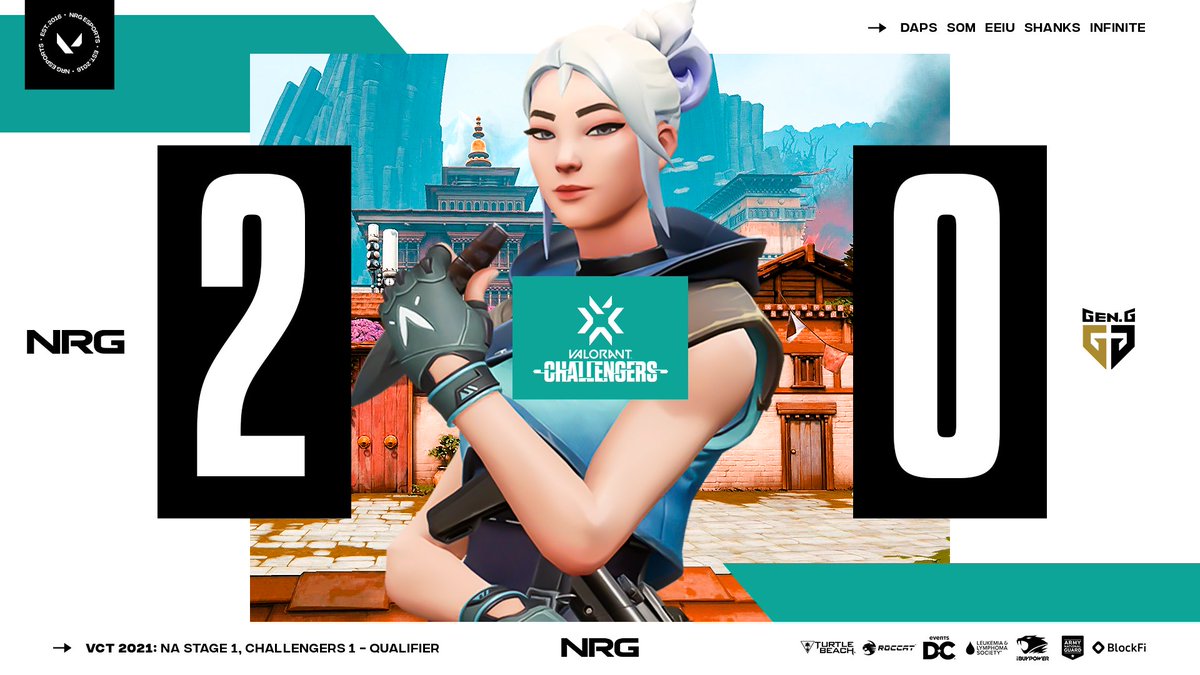 Last but certainly not least, NRG Esports will likely round out the group of teams set to advance through to Challengers 2. This means teams like TSM, FaZe Clan, and T1 are running out of opportunities and face the real possibility that they might have to sit on the sidelines when Stage 1: Masters begins this coming March. What looks like heresy is much more understandable when you look at the laundry list of showings NRG Esports has been putting up week after week.

Not only did NRG qualify for Challengers 1, but they also have shown recent promising performance against the likes of Sentinels, Gen.G Esports and XSET. Combine that with an ace in the making like Ryan "Shanks" Ngo, and things don’t seem so farfetched. Examining their recent bout with Gen.G Esports at Challengers 1, shanks decimated the opposition, putting up 354 ACS with a 195.8 ADR. Now, to the naysayers, those numbers are not consistent, that’s true, but just having someone like that on your roster is positive. He doesn’t need to go nuclear ever match, the core around him can hold their own against North America’s best and brightest, but that kind of firepower cannot be ignored.

With the potential that shanks carries, the consistency that Sam "s0m" Oh has shown in their last few outings and the infrastructure that the organisation has put in place with veteran coach, Chet "Chet" Singh, NRG Esports is posturing to become a name we remember when it comes to the history of VALORANT esports.

VALORANT News
More
Valorant
How A Team Of Streamers Knocked The Crown Off The Kings Of Korea
For the first time in VALORANT history, Korean powerhouse Vision Strikers suffered a loss. The team [ ... ]
Valorant
How Esports Needs To Change To Support Women In Competitive...
Developers, tournament organisers, and esports organisations understand that a lot of effort is needed [ ... ]
Valorant
Riot Reportedly ‘Launching Match Fixing Investigation Amongst...
Following the investigations into match-fixing in Counter-Strike: Global Offensive (CS:GO), carried [ ... ]
Valorant
Shroud Hits Out At ‘Uncomfortable’ VALORANT Feature
Having announced his official retirement from professional Counter-Strike: Global Offensive (CS:GO) [ ... ]
Valorant
TenZ Rises To Stardom As VALORANT Competitive Scene Lights Up
Tyson "TenZ" Ngo has taken the world by storm with his stellar performance in VALORANT. Considered [ ... ]
Valorant
Why Overwatch Players Are Taking Over VALORANT (And Darwin Would've...
Despite their low numbers, it keeps happening. For the last couple of months, they've been part [ ... ]
Valorant
100Thieves VALORANT Coach On Probation And Fined After ‘Threatening...
Following 100Thieves' fifth-placed exit from the VALORANT Champions Tour Masters, Riot Games have [ ... ]
Valorant
What Is The Secret To APE Prince’s Post Plant Setups?
The VALORANT Champions Tour (VCT) is rolling into its inaugural Masters’ event, and South Korea [ ... ]
Valorant
VCT Player Of The Week: babybay - From OWL Star To Masters
Following their dominant first place finish in the VCT North America 2021 - Challengers Three tournament, [ ... ]
Valorant
Can NUTURN Gaming Make A Claim For The VCT: Masters Title?
There are few teams better at submitting their opponents before the spike is even planted than NUTURN [ ... ]
Valorant
Top 5 CS:GO Maps Which Could Potentially Inspire New Maps In...
VALORANT had been steadily rising in popularity since its initial launch back in June 2020. Its growth [ ... ]
Valorant
Raise Your Edge Rise Up
Life is full of surprises, and EU VALORANT just adds a little extra spice to it. Raise Your Edge have [ ... ]
Valorant
How To Play Astra In VALORANT
VALORANT has introduced a new Controller Agent for Act 2 named Astra. She has been one of the most [ ... ]
Valorant
Pro VALORANT Players Asked ‘Not To Teabag’ During Matches
Riot Games has delivered a warning to its professional VALORANT players and asked them not [ ... ]
Valorant
After 53 Straight Wins, How Could Vision Strikers Suffer Their...
Fifty-three straight wins. That is the current win streak of the titans of South Korean VALORANT, Vision [ ... ]
Valorant
Ethan Joins 100 Thieves - Can They Regain The Number One Spot?
In what came as a shock announcement to many, Ethan “Ethan” Arnold has officially joined [ ... ]
Valorant
Can South Korea’s Most Aggressive Team Find Their Way To VCT:...
Styles are what make fights. To see teams impose their own view onto a game and see how different one [ ... ]
Valorant
Shroud Calls For New VALORANT Agent Astra To Be Nerfed Before...
The VALORANT agent pool is set for one of the largest shake-ups yet, with the arrival of the devious [ ... ]
Valorant
Version1: So Close To Breaking Through
Version1 have been around for less than a month, but they’re already trying to shake things up [ ... ]
Valorant
Riot Games Reveal LANs To Return In VALORANT And League Of Legends
It's the moment we've all been waiting for. LAN events are back, and Riot Games has kicked the [ ... ]
Valorant
How Did ZFGaming Take A Map Off South Korea’s Most Dominant...
South Korea’s most dominant VALORANT team, Vision Strikers, suffered an uncharacteristic map loss [ ... ]
Valorant
How To Fix The Crashing Issue In VALORANT
VALORANT is one of the most popular First-Person Shooter (FPS) games since its official launch in 2020. [ ... ]
Valorant
VCT Player Of The Week: Food - Bringing Envy To The Top
Another week, another VALORANT qualifier, and this week's thrilling competition ended [ ... ]
Valorant
Riot Games Announces New VALORANT Tournament For ‘Marginalised...
Since its release in 2020, VALORANT has wasted no time bursting onto the first-person shooter [ ... ]
Valorant
Can Zunba Carve His Own Path In VALORANT?
Not too often do legends of one esport transition into a different title entirely, however, former Overwatch [ ... ]
Valorant
Alliance: Icebox Has A New Contender
If you've caught some VALORANT streams on Twitch this week, chances are it was a North American [ ... ]
Valorant
Koosta Runs It Back [Interview]
Since its debut in 2020, Riot Games’ VALORANT has been steadily rising and attempting to solidify [ ... ]
Valorant
VALORANT Devs Discuss New Game Modes, Shorter Games And More...
It's the battle of the hero shooters as Apex Legends and VALORANT continue to [ ... ]
Valorant
The South Korean Raze God You’ve Never Heard Of
With some of the best Raze mechanics in VALORANT and a style of play all his own, Kim "DoenmO" [ ... ]
Valorant
NRG VALORANT Pro Is Rumoured To Be Dropped After Being 'Toxic'...
VALORANT pro, Gage 'Infinite' Green is rumoured to be potentially dropped from NRG.  [ ... ]
Esports Calendar
rocket league
RLCS X Spring: The Grid (NA)
It's North American's turn to score points for qualification to the World Championship. Matchday 5 - Round 1
rocket league
RLCS X Spring: The Grid (NA)
It's North American's turn to score points for qualification to the World Championship. Matchday 5 - Round 3
overwatch
2021 Overwatch League
Blizzard's OWL is back for the 2021 season! West Group
overwatch
2021 Overwatch League
Blizzard's OWL is back for the 2021 season! East Group
overwatch
2021 Overwatch League
Blizzard's OWL is back for the 2021 season! East Group
overwatch
2021 Overwatch League
Blizzard's OWL is back for the 2021 season! East Group
valorant
VALORANT Champions Tour
VCT 2021 features three levels of competition -Challengers, Masters, and Champions. Challengers is a regional competition and winners will qualify for the Masters. Korea Stage 2 Challengers - Decider Match
This website uses cookies
Cookies help us and our partners provide statistics. By browsing this website, you consent to the use of cookies in accordance with our Privacy Policy and Cookies Policy.
Accept & Close