Especially the North American region is stacked, but Europe also has a lot to offer

The first set of tournaments after full launch are starting. In a comprehensive global challenge, Twitch Rivals is currently taking place in 8 different VALORANT regions from Europe, Asia and both American continents. Teams are made up of invited streaming personalities who build their teams around them which often include pro players from other games as well as names which have already turned some heads during the VALORANT beta tournament competition.

Unfortunately, the schedule will likely be unpredictable, so viewers are advised to keep an eye on the official twitch rivals channel as action will be going on all weekend. Players are also allowed to stream the games on their personal channel.

Considering the sheer volume of matches we will get to see, we picked our own selection of teams to follow this weekend based upon their history both in esports and in VALORANT beta and which are likely to produce the best competitive matches.

Team ONSCREEN
Teams had to be made up of at least one prominent streamer who was directly invited, which made it impossible for Fish123 to compete as a full line-up. The clearly best European VALORANT team from beta therefore had to team up with streamer ONSCREEN, lacking ardiis but making for one entirely British squad. Out of the 8 tournaments the team had participated in they won 7, making them the clear favourite to win this event. For those wanting to improve, the personal streams of the Fish123 players are a great resource.

Sliggy
@Sliggycsgo
The @PlayVALORANT beta is over. Here's a recap of FISH123 achievements during it.
Big role change for me personally, I appreciate all of the support 🇬🇧 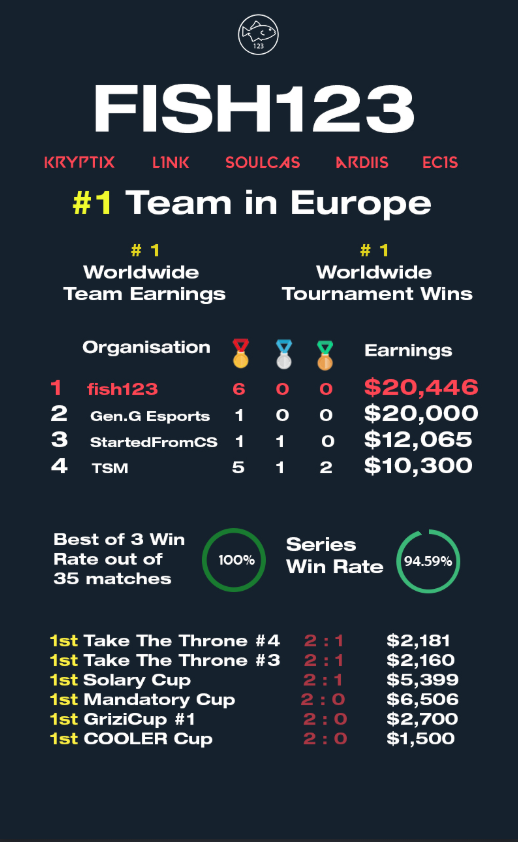 Team Mixwell
On top of former tier 1 CSGO players, Team Mixwell also brought the missing fish ardiis on to compete with them. The names of Mixwell, ScreaM, pyth and draken were all on top 10 teams in the world at one point in their career and should therefore be one of the best competition to team ONSCREEN. The sheer talent on this team should not be underestimated and the core of it have also competed at length with each other in beta. You watch this team to see where CSGO fundamentals can carry you to.

Team gdolphn
Another team which had to shed one of its players in order to be able to participate while having to carry a streamer. FABRIKEN has been another team which has shown great potential in Europe. Made up of former Tier 2 players and CS and Overwatch, the team has made it to several finals, winning the VALORANT Academy – Europe tournament.

Team nookyyy
There was once a time when German Counterstrike was competitive and top teams could mess with the world’s best. In the last decade, all of the best German line-ups always included legendary in-game leader gob b, who teamed up with CS veterans nookyyy and zonixxx who themselves are known names within the German community. This roster exudes veteran energy.

The competition in North America is stacked and almost every team got a shot at the title. However, the handicap of having to field a streamer feels very different if the streamers are the likes of brax, aceu, TenZ, Hiko & co. A selection, therefore, is challenging, but we selected the teams we think will have the best odds to go farm or win it all.

Team Brax (T1)
Skadoodle completed the star-studded roster of T1, bringing half of the former notorious iBuyPower crew back together. T1 had been one of the most dominant teams in the North American beta and the fact that they get to play without a streamer handicapped makes them the favourite in this tournament. Their play is as close to textbook VALORANT as we currently have and viewers who want to improve are well-advised to listen to the concise calls of this team, as well as the crisp and calculated gameplay.

Team Hiko
Not only is Hiko and outstanding player in VALORANT as we know it, but he has also put the core of the strong Gen.G roster around him for this tournament. Gen.G themselves had left T1 in the dust in their own tournament, the T1 x Nerd Street Gamers Invitational, which arguably has been the most competitive tournament in VALORANT to date. Hiko participates in these events with the goal to win, and his roster selection makes it obvious that this team isn’t going to toy around.

The competition is already running hot right now, so tune in to any of the aforementioned streamers and catch the action live all weekend!