A diamond in the rough, Leave continues to show potential

December 5th, 2017 was Huang "leave" Xin’s last match alongside Miraculous Youngster. Success that stretched the whole year, titles, and awards were all attached to those names, but sadly it wasn’t meant to be. However it is his return to Overwatch, on the biggest stage of them all, that is intriguing, his journey in becoming a Chengdu Hunter.

Such a legendary player alongside such a legendary team left the Chinese esports scene, not with a failed at-bat, but with a whimper. Leave and Miraculous Youngster were set to play against Lucky Future in the Nexus Cup 2017 Annual Finals’ lower bracket. Miraculous Youngster disbanded their Overwatch roster the day before their match was set to take place and in a flash, they were gone. The team that won the 2017 Overwatch Premier Series title, the player who was voted to be the best Flex Player and the MVP of the season, was gone. Bits and pieces from the team found their way to the Overwatch League, but Leave was ineligible due to his age.

“I still believe that Leave has a different level from what we've seen this season.”
— Eren "Kenobi" Erkey

We were offered a glimpse at Leave’s talents again during the 2018 Overwatch World Cup. Leave alongside Team China awed the crowd in their surprising run past Team Finland, past Team Canada, and ending with a tough loss to Team South Korea in the grand finals. Throughout the world not only witnessed Leave’s skill, but how flexible he was as he piloted heroes like Doomfist, McCree, and Zarya. It was here the world saw what promise he had, it was at the World Cup where the seeds of interest and thought were placed.

What if Leave joined the Overwatch League?

On July 25th, 2019 Leave joined the Chengdu Hunters but was ineligible for play due to his age.

Almost 2 years to the day, the community saw Leave’s official return as apart of the Chengdu Hunters during the Overwatch Shanghai Masters Invitational 2019. He and the team advanced quickly past the Guangzhou Charge with a 3-0 victory, but struggled against the Shanghai Dragons, a team we know now to be in contention to be the best team in the world.

March 28, 2020 would give us Leave’s first match on the Overwatch League stage with the Chengdu Hunters. In a narrow loss to the Hangzhou Spark, the Hunters have been fighting through the battle royal that the Asia region seems to be. With competition being incredibly close, each week feels like a game of inches more so than the West and more than any other season. So far Leave and the Chengdu Hunters haven’t had the best record in their 2020 efforts amassing a 4-12 record, however, with a new patch comes a new metagame and a recent strong showing against the Shanghai Dragons could see the Leave and company begin to course correct.

While the Hunters seemed poised to do well this season with the freedom that the Hero Pool system brought, things have been more inconsistent than ever. One week Leave and the team look to have returned to their winning ways, becoming dark horses for the playoffs. Other weeks they step backward and look lethargic, lost even, and Leave is understandably affected by that. Overwatch Contenders China commentator, analyst, and expert, Eren "Kenobi" Erkey weighed in on how Leave has progressed in his first season in the Overwatch League. 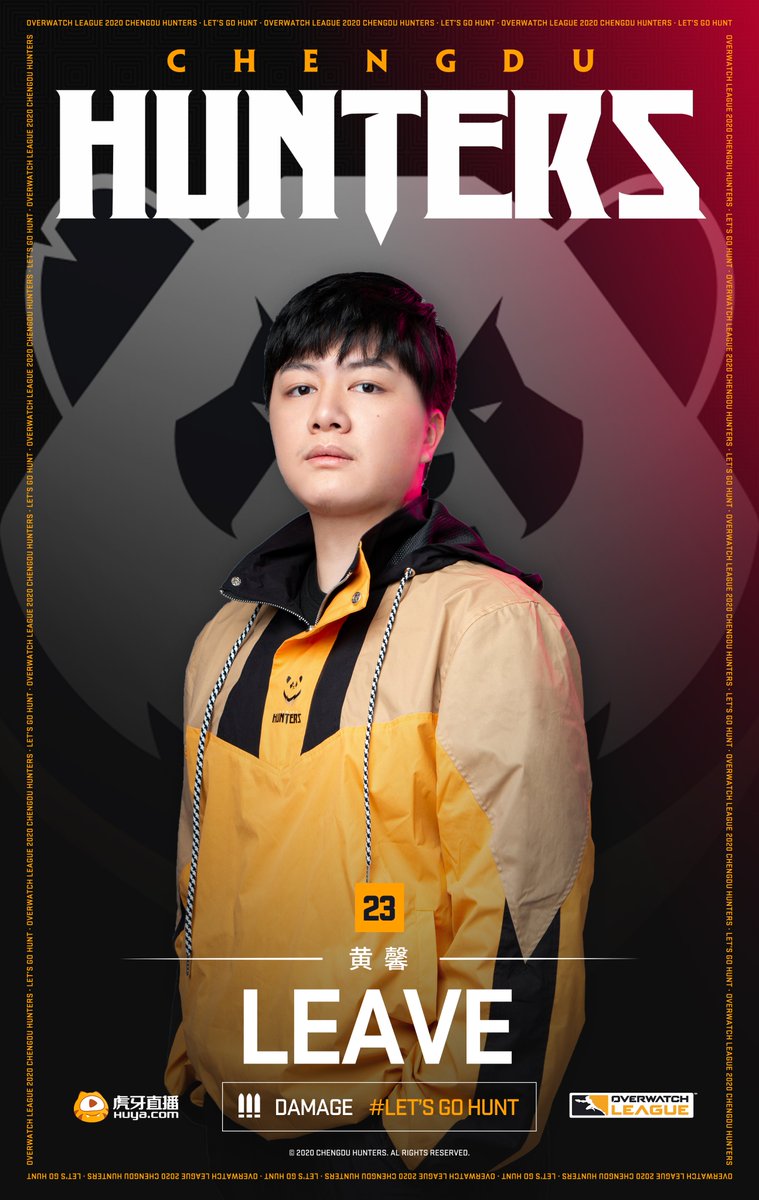 “I think Leave has progressed very well over the season,” Kenobi said. “While I don't think quite gotten to the level at World Cup or back on Miraculous Youngster, he's still been much better than when he started. In the beginning, I think it really showed that there was a lot of rust in his mechanics but he's shaken it off throughout the season.”

“One of the things I think Leave brings to the table more than anything is his vast hero pool. While I think Jinmu is very good at the heroes he plays, his hero pool isn't the deepest. With Leave, however, Chengdu had the ability to open up and play many different compositions with Leave having a vast hero pool which at this point I'm confident he can play almost anything at a good level.”

Aggression and flexibility with echoes of the same carry star that dominated the Overwatch Premier Series in 2017 are what we’ve seen from Leave this season. However, the team seems to lack a guiding hand, which could also be a symptom of the chaos that 2020 was brought onto the world. At times he can venture a touch too far forward and get picked early. It is, as if, he is trying to do too much sometimes and his play can suffer because of that.

Leave’s progression into becoming a Hunter has been tumultuous. From taking an extended hiatus from Overwatch in 2017 to learning the balance of how much the individual can do versus the team, he is a member of a small group of players that has both seen the highs and lows of competition and continues to write his story. However, one remains as clear as daybreak; Leave has the potential to be great.

“I still believe that Leave has a different level from what we've seen this season,” Kenobi said. “There have been glimpses of this level of play during the regular season but unfortunately, I think the issue is with Chengdu as a whole.”

Kenobi extrapolated on what the Hunters changed in the 2020 season that has caused some concern. “I think the biggest weakness they have is they don't play to their strengths as often as I would like.”

The Chengdu Hunters throughout the tank heavy, GOATS metagame that dominated the majority of 2019 was known for playing their own variant which included Wrecking Ball and more DPS centric compositions. “Chengdu as a team I think excels when they play pure comfort picks which is something they have strayed away from this season in particular.”