Here is a look at the positives for Fnatic which helped them outclass G2 Esports.

The League of Legends European Championship (LEC) Spring Split has been in an absolute frenzy with Fnatic defeating G2 Esports. The game of the week's result should have caught many fans by surprise, as Fnatic looked very shaky and awfully aggressive in the earlier stages of the tournament. Now, it seems like the limit-testing and countless tower dives over the enemies have resulted in excellent results.

Unlike G2 Esports, Fnatic had a new journey to embark upon, and a couple of recent entries to the squad like Elias "Upset" Lipp, Yasin "Nisqy" Dinçer, and the new coaching staff as well. The team also lost its star AD carry-Martin "Rekkles" Larsson to their arch-rivals (G2 Esports), and things weren't looking good for them on the paper. However, despite the odds, they pulled off a massive victory against G2 Esports and are slowly gaining momentum in the tournament when it matters the most. Even though the match was a best of one and doesn't show the true colours of the G2 squad, it will be undoubtedly good for the team's morale as they defeated their rivals with the absence of Rekkles in the team.

Before we dive into the piece, we would like the readers to know that G2 Esports didn't have a stable internet connection for this match, and they disconnected during the match and played with packet-loss during. Therefore, judging them too harshly wouldn't be right. At the same time, we also believe that Fnatic played brilliantly throughout the match and snowballed their leads, perfected to out-throw G2 Esports, and handed them their second defeat of the tournament.

EQUAL AND PERFECT DRAFTS FOR BOTH TEAMS

In terms of the drafts, the fans weren't in for a surprise as meta picks were chosen, and late-game scaling was present in both the squads. The bans were on point, with teams taking away the opponents' comfort and counter choices. The Kai Sa pick from Rekkles could be a topic of discussion after the match went down in that fashion, which didn't allow the pick to shine as there was no late-game scaling available for the champion. Moreover, two direct top-lane bans were made in the second banning phase from G2 Esports to favour the match-up for G2's Martin "Wunder" Nordahl Hansen, which turned out to be a disaster later.

Even though Wunder got a solo kill at the top lane, silly mistakes and missed abilities resulted in some more kills for the Volibear, and Gabriel "Bwipo" Rau simply carried the game for Fnatic. FNC Oskar "Selfmade" Boderek also made roams towards the top side, often to set up dives for the top-laner, which further escalated the game for the men in orange.

SHAKY YET STABLE AND CALCULATED FNATIC

Fnatic looked very disorganised when the match started, with two outplays happening at the same time on the map. G2 Wunder got a solo-kill at the top laner, and G2 Mihael "Mikyx" Mehle threw the Fnatic support under the tower to secure another kill at the bottom lane. However, after that, Fnatic pulled back the match in a spectacular fashion where they secured small risk-free kills and beautifully crafted the match's momentum, rarely giving a chance for a comeback to G2 Esports.

FNATIC
@FNATIC
3v1? No problem for the angry bear. This play from @Bwipo powered us through to victory over G2 ðŸ’ªðŸ»
âš¡ @JackLinksUK
39
861
Advertisement

Even though Bwipo was the star of the game, Selfmade played a significant role in bringing back the match for the side of Fnatic. He was the unsung hero who was involved in successful ganks to back his squad into the game and secured objectives slowly to push his team forward. The jungler participated in all of the ganks for the team and created pressure on G2 Esports to respond through their kills or fall behind in the match.

Moreover, the mid lane was dominated by G2 Rasmus "Caps" Borregaard Winther as expected, but a failed gank from G2 Marcin "Jankos" Jankowski in the presence of FNC Selfmade turned the team's tables and brought Azir into the match. As the match progressed, Fnatic took team fights that were favourable to them, while G2 Esports had some picks of the enemy support during the match. Fnatic got their first Baron at the 20-minute mark without any competition from the G2 squad and steamrolled their way through the squad. Azir and Aphelios scaled very high into the mid-game, where they dealt a lot of damage to the enemies. Coming back to Selfmade, he took three dragons and intentionally left the soul point dragon for G2 Esports to trade their inhibitor for the dragon.

These macro plays made sure that Fnatic had calculated actions, and they made some fantastic in-game decisions, which led to the G2 Esports stomp by the scoreline of 19-9.

STAR OF THE MATCH - BWIPO, THE VOLIBEAR DEMIGOD

FNATIC
@FNATIC
BEAR SMASH ðŸ»
With 4 solo kills and more than 15k champion damage, @Bwipo is your @AMD MVP for win over G2. 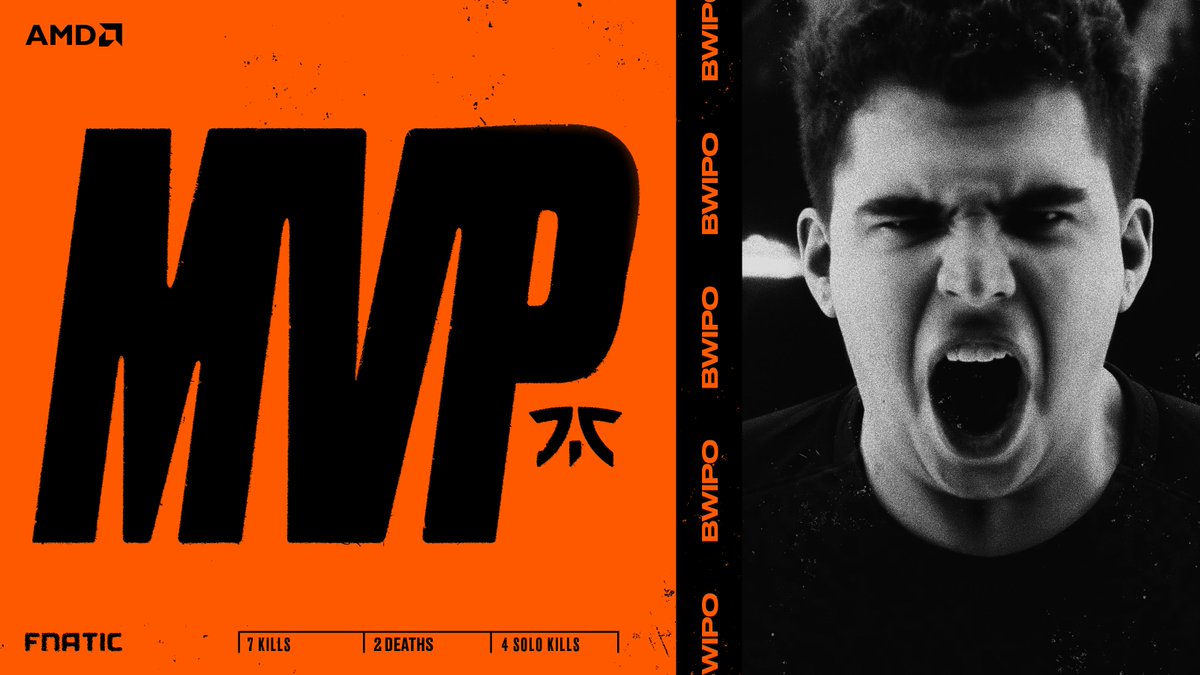 Undeniably, after the rough early game, FNC Bwipo ruled the mid-late game and picked the enemy AD carry in almost every team fight. The bear recognised the threat, snowballed his lead to destroy the enemy backline by using his ultimate and creating the team's opening. Moreover, he played the role of carry after Rekkles left the squad, and his sudden attacks to the ADC was stated as 'personal' by many players and created a new narrative for a spicy re-match later into the split.