Everything you need to know from what happened at the Call of Duty League Minnesota Home Series.

The Minnesota Rokkr host this week's Call of Duty League Home Series, as we reach the halfway stage. Last time out we saw some mid-table teams rack up those all-important CDL points.OpTic Gaming Los Angeles and New York Subliners both reached the semi-finals again with some impressive displays over the weekend, and London Royal Ravens managed to reach the final for the first time this year. With all four semi-finalist teams going through recent roster changes, it was clear that they have paid off, especially that of Prestinii to Chicago Huntsmen, who got their hands on a second CDL chip by winning the Seattle Home Series. This time around we see all the top five in action in what is set to be the most competitive series to date.

Minnesota's second Home Series has wrapped up its first day but not without some major controversy. Just two matches into the day and the Home Series was already marred by "rigged" comments from the Call of Duty community. While this is no doubt the story of the day, there will still some great matches and three Game 5's. Let's see how the day unfolded and what controversy took the CDL by storm.

Day one started very innocently with a Game 5 series between the Toronto Ultra and L.A. Guerrillas. It was a nail-biter up until the final round, but the Guerrillas were able to best the Ultra in a narrow victory. This finish is rather disappointing for Toronto, as the team hoped to carry the momentum they gained from the Seattle Home Series.

The next match of the day is where the controversy comes into play. The match started with the Seattle Surge surprising the Atlanta FaZe by going up 2-0 in their first series since Karma's retirement. However, after the second map, an apparent technical delay occurred. The CDL held up the series by around 45 minutes for unknown technical issues. Of course, this halted the momentum Seattle gained by quickly going up 2-0, letting FaZe reset and go over strategy. This clearly helped, as Atlanta took the next three maps to win the series in a reverse sweep. Many fans think it's odd that the CDL experienced such a long technical delay right after one of it's most prominent teams went down 0-2. This is coupled by the fact the league gave FaZe a free map win against the London Royal Ravens two events ago. Nonetheless, this doesn't change the fact that Atlanta beat Seattle 3-2.

The last two matches featured some grudge series between Flordia and Chicago, and Minnesota and Dallas. First up was Florida besting Chicago yet again, keeping their win streak against the Huntsmen alive. It appears Chicago has their kryptonite and it takes the shape of a Kraken. Next, we had Dallas defeating Minnesota by a score of 3-1. None of the maps were truly close, and it seems the Rokkr just aren't there yet as a team. Dallas, on the other hand, still looks like the best roster in the world.

Call of Duty League
@CODLeague
The first step towards #3: @DallasEmpire close out the series 3-1 over Home Series host Minnesota @ROKKR on the back of @Huke's slaying power.
#BuildAnEmpire | #CDL2020
11
97

The second day of the Minnesota Home Series has concluded and it seemingly went off without a hitch. That's great to see, as day one was marred by a huge controversy. However, day two featured nothing of the sort, but did provide some entertaining matches and perhaps the biggest upset of the year.

Starting off the day was an average match between L.A. and Florida. While the Mutineers took home the win, the Guerrillas are showing real signs of improvement, as we'll see later on in the day.

Next up was the marquee matchup of Saturday, as Dallas and Atlanta squared off. Once again, FaZe fell down 0-2 and needed a reverse sweep for the victory. Well, even without a 45-minute delay, ATL did just that, winning 3-2 over the Empire. However, later on in the day, the Empire would qualify for Championship Sunday with a win over the upstart Seattle Surge.

In one of the final matches of the day, the L.A. Guerrillas and Chicago Huntsmen faced off in a battle of David vs. Goliath. Though the Guerrillas have been showing signs of improvement, no one expected them to defeat the defending champion Huntsmen. Well, it came down to the wire, the L.A. managed to pull it off with a 3-2 win. The Huntsmen seemingly made too many little mistakes throughout the weekend, proving that winning with a new roster isn't as easy as they made it seem the last event.

Championship Sunday kicks off with a Warzone tournament at 3:00 P.M. ET followed by Atlanta vs. L.A. at 4:00. 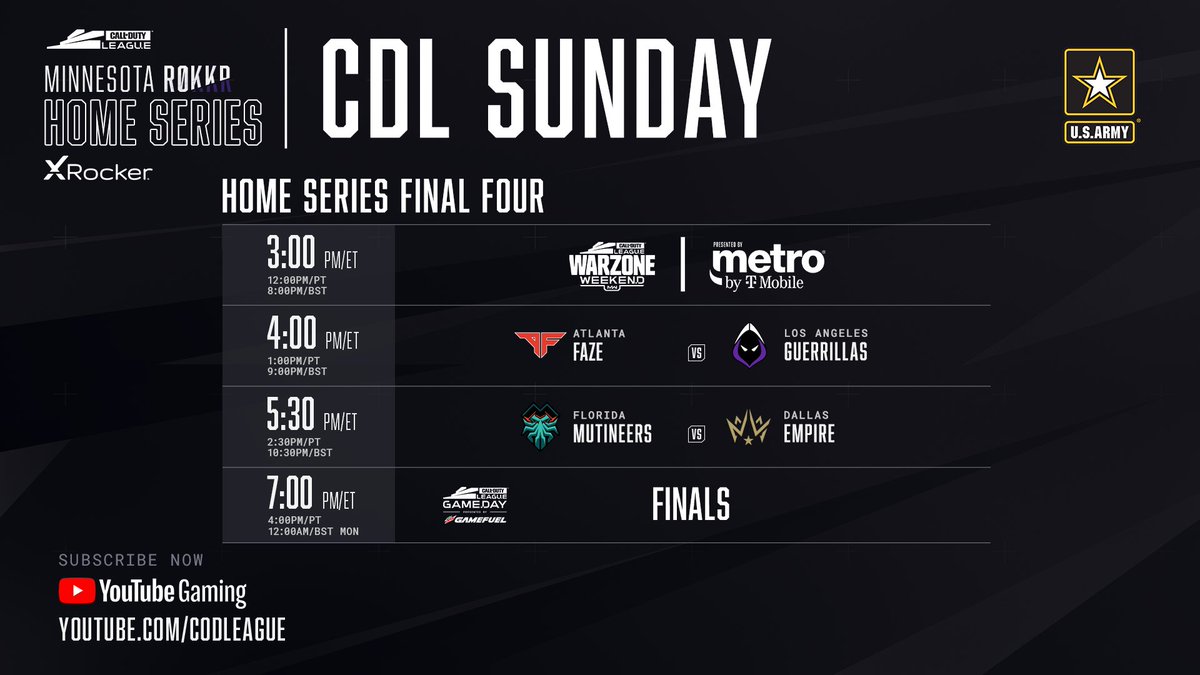 In a bit of a surprise finish, the Florida Mutineers have taken home their second CDL Home Series championship. The Mutineers bested the Atlanta FaZe by a score of 3-1, only dropping the S&D. While this finish might shock some, Atlanta was playing with fire all weekend. After reverse sweeping their first two wins, FaZe went down 1-2 against the Guerrillas in the semifinals today. Though they were able to get out of that hole, they weren't able to complete a comeback against Florida.

This Home Series was a revelation for some teams, like Florida and Los Angeles. The Guerrillas were able to defeat the Huntsmen to make it to Sunday and even went up 2-1 against FaZe. Unfortunately, they couldn't close out the series, but all signs are pointing to progress for L.A.

As for Florida, this further cements them as one of the top five rosters in the CDL. The addition of Owakening and benching of Maux was questioned at first, but the Mutineers' move has seemed to pay dividends rather quickly. The big question facing Florida now is will they be able to keep up the momentum like few teams have been able to do?

The Call of Duty League is back in action next weekend, as Paris hosts its Home Series.

Florida Mutineers
@Mutineers
Game, Mutineers. 3-1 and it was EZ AF. 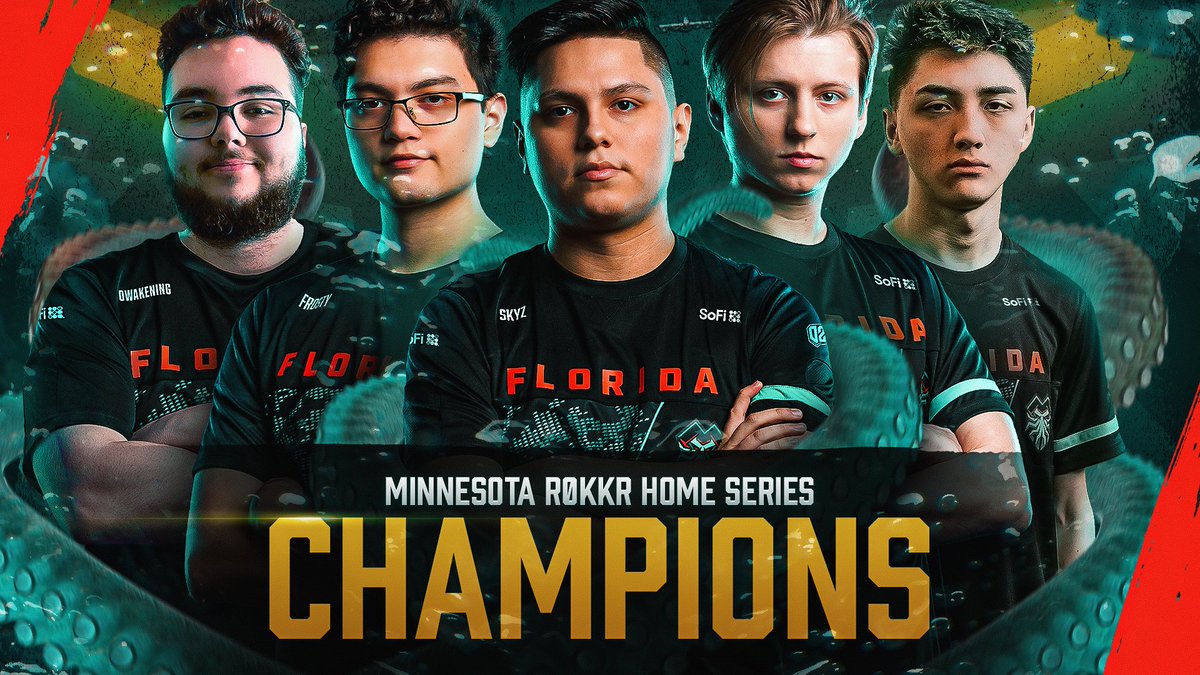