The Call of Duty League returned to action today as the London Royal Ravens hosted their second Home Series.

The Call of Duty League returned to action today as the London Royal Ravens host its second Home Series event. While the day's matches went according to plan on paper, yet another online format-related controversy heated up the community. We'll be talking about that and the rest of Friday's games in this recap, so let's get into it.

Starting off the day, we had the Dallas Empire take on the Paris Legion. While the Frenchmen were able to take a map of Dallas, the match ended in the predictable result, with the Empire taking home the 3-1 win. Paris still can't string together any good performances and are looking like one of the worst rosters in the CDL right now.

Now, time for the controversial match that took place between London and the Seattle Surge. With London up 2-1, the series went into a critical map four Hardpoint. The game started with the Surge up around 20 points when Seattle's Josiah "Slacked" Berry had his Internet shut off, disconnecting him from the game. The CDL referees, however, didn't stop the Hardpoint, allowing Seattle to play 4v5 for an entire map instead of replaying it. This, clearly, wasn't the right choice, and the Surge players let the CDL know it. Slacked and Sam "Octane" Larew went on Twitter tirades full of profanity and anger towards what they called "joke" of a league. According to league officials, each player is responsible for their own Internet connection, which is nearly impossible to control. It's safe to say that the CDL needs to figure out what warrants a replay and what doesn't before Call of Duty Champs and life-changing money is on the line. 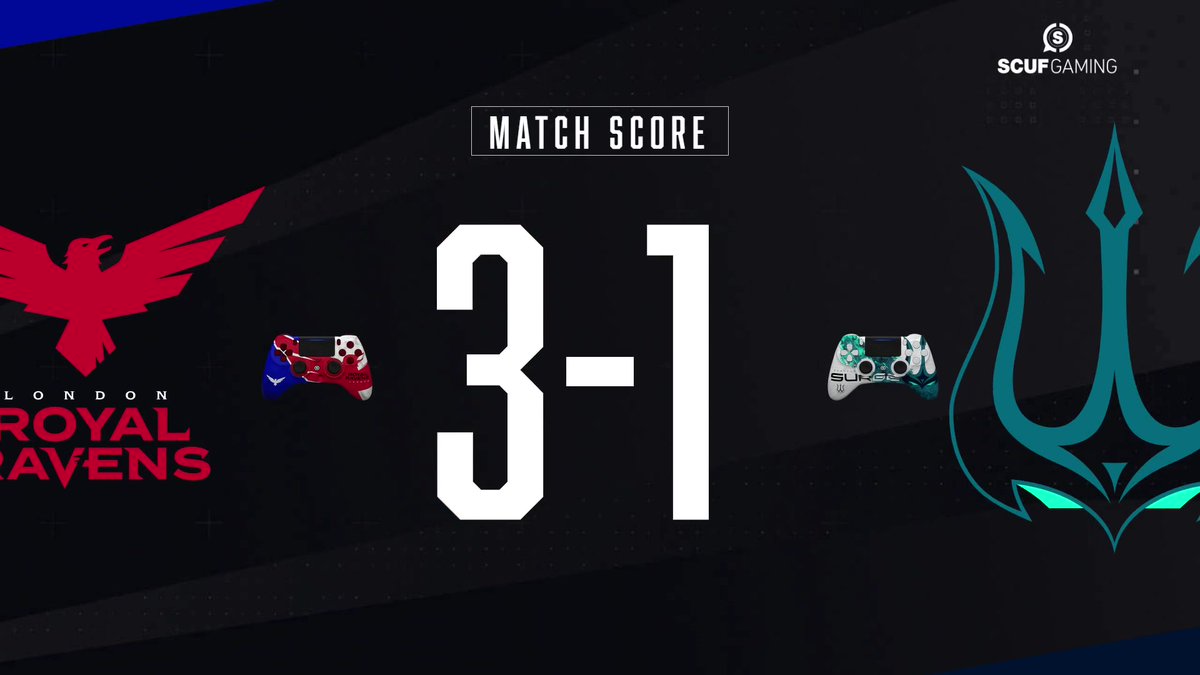 The rest of Friday played out fairly predictably, with Florida besting OpTic Gaming 3-2 and New York continuing their hot streak against the L.A. Guerrillas, winning 3-0. One big note from these matches was the new roster of OpTic Gaming, featuring two amateurs and no Brandon "Dashy" Otell. While the team didn't get a win, they did go to a map five with one of the CDL's best squads. Maybe this is the turning point for the storied franchise. 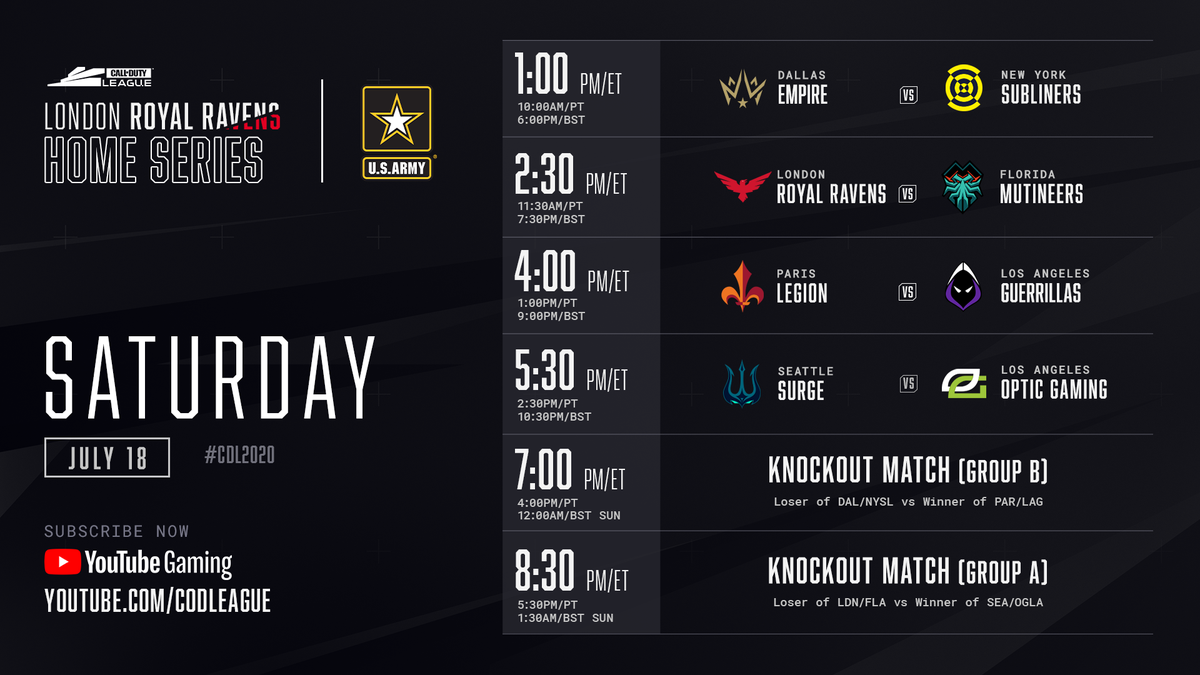 The second day of CDL London held some major surprises but mostly, it was a predictable day. However, the day was free of controversy and profanity-laced Twitter tirades, much to the dismay of fans of drama. Saturday still was an interesting day of Call of Duty though, so let's what went down heading into Championship Sunday.

Day two began with what was thought to be a slugfest between two of the CDL's best in Dallas and New York. Although, it wasn't much of a slugfest as it was an eye-opener. The Empire swept through the Subliners in three pretty close maps, dropping New York to the loser's bracket. This was quite the shock, as New York did just win its first Home Series. The woes would continue for the checkered team as they were swept yet again by the surprising Paris Legion in the loser's bracket. Paris beat the Guerrillas 3-1 earlier in the day and took down the Subliners in their best match all season. The Legion have made it to Sunday for the first time this year while New York goes home after not winning a map on Saturday.

As for the rest of the bracket, the London Royal Ravens also shocked the CDL as they defeated the red-hot Mutineers 3-2. On top of that, it was a reverse sweep for the EU squad and they could become the third team to win their own Home Series tomorrow. On the losing side of things, Florida might have lost some of their fire after the long break but did bounce back later in the day against OpTic Gaming to secure their spot in Sunday's bracket. OpTic looks much improved with the new roster and could have gone to another map five with Flordia if not for some unlucky spawns on the map three Domination.

Championship Sunday begins tomorrow at 1 pm ET/5 pm BST with Warzone Weekend but one hour later and its London taking on Paris. 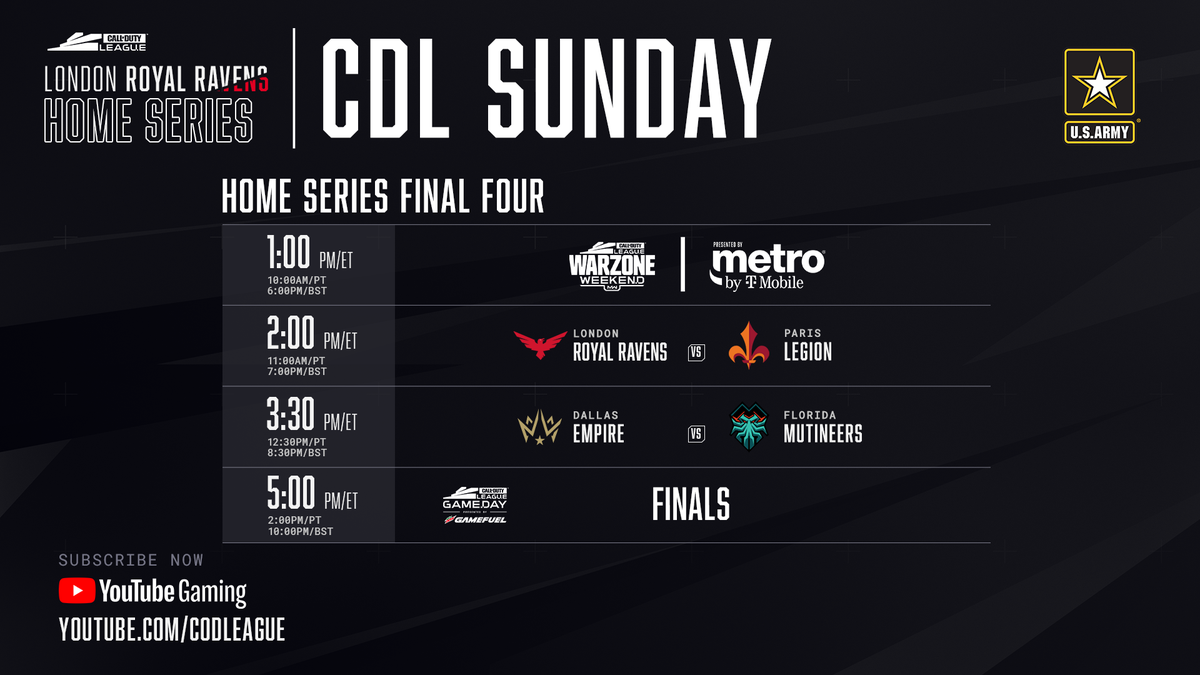 We have a winner at the CDL London Royal Ravens Home Series event, and it's our second third-time winner. The Dallas Empire has secured yet another Home Series win and this one comes in a near-flawless fashion. Only dropping one map all weekend long, Dallas has propelled themselves to second in the CDL standings after defeating surprise contender, the Paris Legion, in the finals.

It was a strange day of Call of Duty. The Paris Legion pulled off another major upset, defeating the London Royal Ravens 3-2. The Legion went from being a hapless obstacle to a real contender in just one week, and it's unclear if this new spark is here to stay. The Legion currently sits in eighth place, one spot away from the loser's bracket during the postseason, but that could be overtaken by another team next weekend at CDL Toronto.

Talking about the other side of the bracket, the Florida Mutineers finally fell at the hands of the Empire. After defeating them time and time again, Florida couldn't withstand another matchup. However, the Mutineers did bunny-hop the Huntsmen for third place in the CDL standings. It will take a massive effort for Florida to retain that spot next weekend though, as the top four teams of Atlanta, Dallas, Florida, and Chicago are all playing at CDL Toronto. 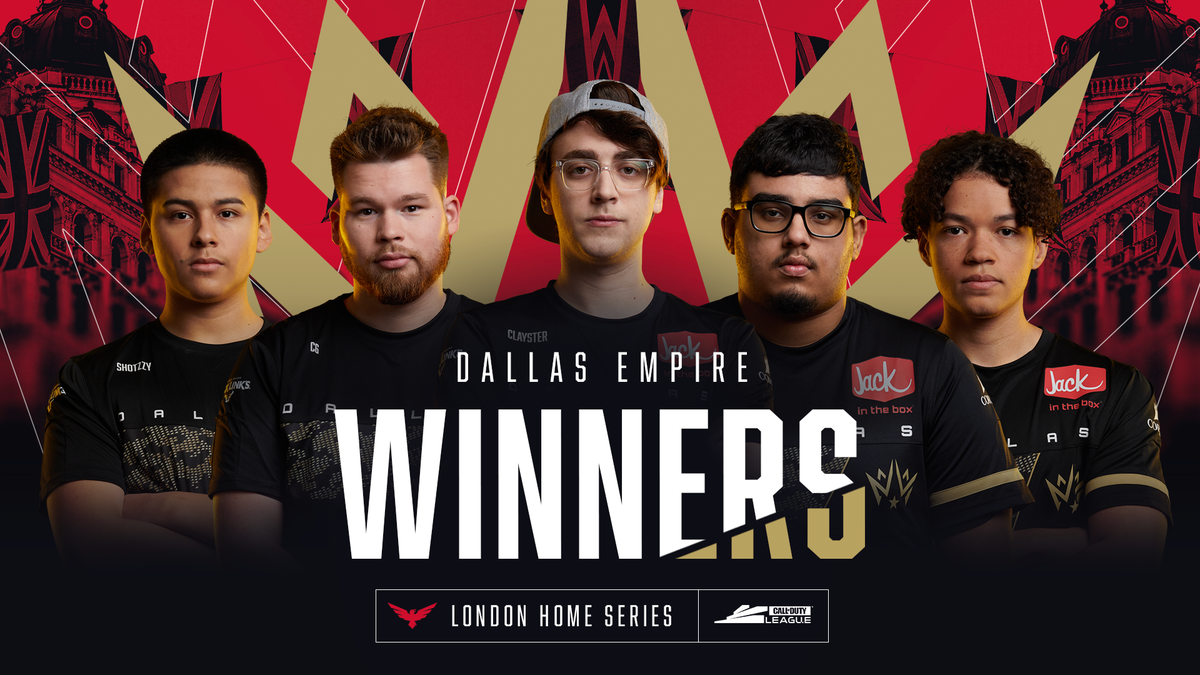