Want to change your Island name? Or maybe craft multiple items at once? You're not alone.

Animal Crossing: New Horizons has been delighting fans worldwide for almost two months, and its popularity only continues to rise. ACNH has, so far, implemented six patches in total, including things like seasonal events (Bunny Day & Nature Day), general online-play game functionality updates (Best Friends & Nook Link), and most recently – the introduction of an Art wing to the Museum, as well as visiting characters such as  Redd (the art dealer) and Leif (the gardener).

However, even with all these changes, ACNH still has a long way to go. Many in-game menus and gameplay options are simply not slick or intuitive enough, and in a few ways, the game feels like a very good beta with a hefty price tag.

The Animal Crossing community regularly comes together on Reddit, Facebook, and Twitter to voice their opinions on the quality of life changes the game simply must make to continue its success and their interest.

sarah !!
@acnh_freshstart
I wish you could craft multiple items at a time so i don't have to spend 10 minutes crafting the same item sigh #AnimalCrossing #ACNH 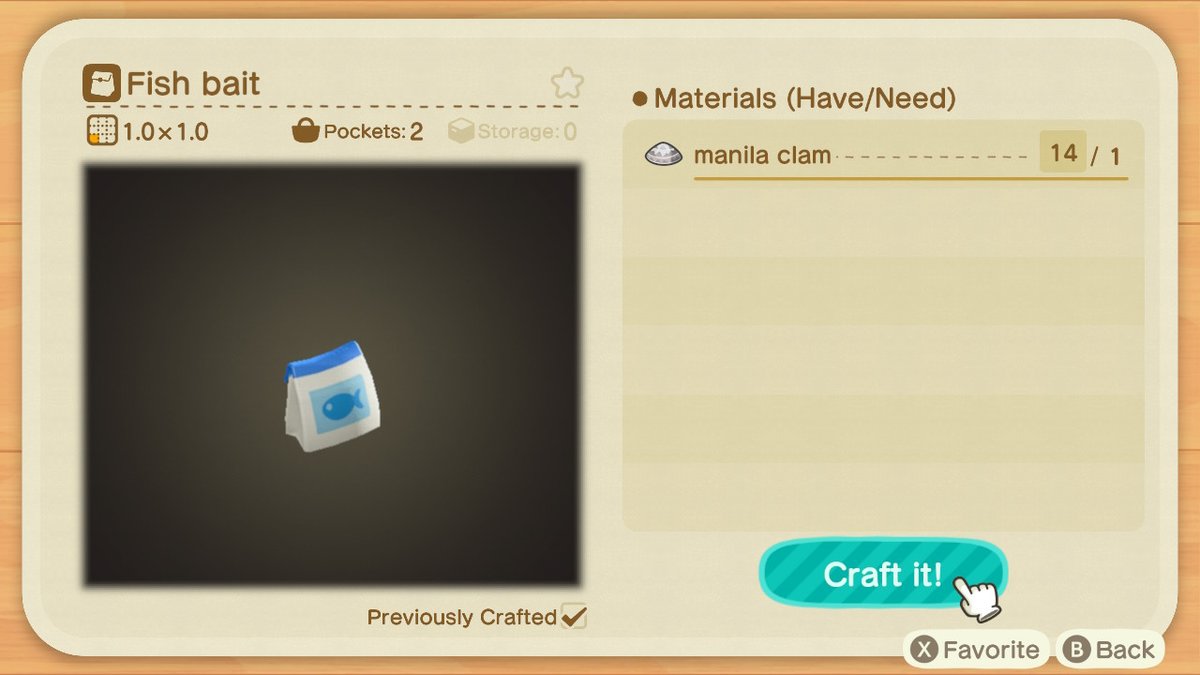 On the surface, this seems like a relatively easy fix on the part of Nintendo. If your character has the necessary materials in their Inventory, why not add the functionality to craft as many of one item as you please?

As for Buying in bulk, Nook Miles Tickets are the worst offender. Printing a NMT can take years off your life, and once printed, the rigamarole must repeat again.

The changing room in the Able Sisters Tailors is also a place where a Basket system could be used to max potential, allowing your character to Select all the items they wish to buy and checkout in one sweeping motion.

This is a tricky one. You are warned when it comes to naming your Island that you will not be able to change this (for reasons possibly relating to save files), but players would still relish the opportunity to do so. This could be for any number of reasons – one being they simply don’t like it anymore, or perhaps they’ve decorated their island with a theme, for which the name no longer applies.

Players frustrated with the inability to change their Island name have even gone so far as to restart the entire game.

Players aren’t asking for much in the grand scheme of things, and are even offering their own ideas about how to combat this problem, including paying a large amount of Bells, or a one-time name change option.

We, for one, hope Nintendo addresses this major issue quickly, before too many players decide enough is enough – and decide to do a major reset, losing their 5-star Island they worked so hard on.

ACNH players are torn on this issue. Whilst a 360-degree camera is available inside houses, it isn’t usable outside in your Island, and there are a few reasons why certain players want this, and others aren’t so bothered. There is an argument that stylistically, a 360-degree outside view does not make sense in the aesthetic brand of Animal Crossing, running alongside all its previous titles.

Lucy 🌈 (she/her)
@Garmfeeld
why do people keep suggesting a 360 camera for acnh, that just seems like it would ruin the series' style
0
1

However, going back to the aforementioned “very good beta” description, some players are incensed at the lack of camera rotation, and says “it’s 2020 and this is a AAA game.”

Vayne Verso
@vayne_verso
Stuff I would have wanted in #AnimalCrossing: New Horizons. #ACNH
1. 360 degree camera outside. It's enormously annoying how the front-facing camera is always obscuring your view of things. I know it's a major engine and art asset change, but it's 2020 and this is a AAA game.
0
1

It’s true that while ruination of the games inherent style could occur if this update were to happen, the 360-degree camera is present inside homes, so why not outside? Players are being forced to change their island layout to conform to this camera restriction, meaning some are growing frustrated with how it looks.

Several ACNH players have voiced their opinion on wholesome Isabelle’s morning announcements – or lack thereof. Her announcements are not informative enough, and Animal Crossing players would love her to mention the visiting of vendors, weather, and more.

bri
@ghoulscrossing
listen don't cancel me for this but I'm kinda over Isabelle's daily announcements. It was cute at first but if you're not gonna tell me that flick or cj is there or the weather or things like that I just don't have any interest in reading anymore
736
3920

Adding more Isabelle dialogue options should be a breeze for Nintendo, and this is something we do expect to see in forthcoming updates.

Not quite so hot a topic, but a relevant one nonetheless is the customisation option for fences.

Nessa is playing ACNH
@nessathewriter
I know there's a lot of talk about what new features should/shouldn't be added to animal crossing but literally all I want is customizable fences. I want to be able to paint the fences P L E A S E
0
2

As one ACNH fan points out on Twitter, the Nintendo games trailer itself showed white picket fences – but none are available in the game. This led players to believe a painting option would be available for fences, but alas, no such option is present.

For those Animal Crossing players who want the “white picket fence” of their dreams, they may have a little longer to wait.

Travelling to Other Islands

Travelling to another Island in Animal Crossing: New Horizons can be a tedious process. When arriving at your Airport, you are then subject to several voice lines from Orville the Dodo before you can jet off to your destination, including “connecting to the internet”. For most players, this seems odd, considering the in-game Nook Phone pings you when a Best Friend comes online, surely because your Switch is always connected to Wi-Fi(?)

The cutscenes are also a nuisance, and many make the point that ACNH implements these to prevent from using boring loading screens.

Frey Sirois
@freosys
@Mattiehhh I know, the online system is so clunky on ACNH, you have to go through so many dialog options at the airport and the loading screens are so slow
0
1

Icons for Characters on Map

ACNH player will be familiar with the frustration of trying to find the tiny Daisy Mae on a Sunday, as she hides her small frame behind trees, or not being alerted to the fact CJ is around (by Isabelle too…) because he isn’t always visible. Some ACNH players have requested icons on their mini-map, showing them where NPC characters, visitors, and villagers are at that current moment.

This would definitely help with finding those pesky vendors, as well as delivering lost items back to your Villager buddies.

So, what will the next update include?

The next Animal Crossing: New Horizons big patch and update is due in the next few weeks for the Summer season. Eagle-eyed dataminers, and players who sniff out odd dialogue in-game (such as coffee fanatic Brewster coming up in conversation), have come up with their thoughts on what might be coming soon.

Several YouTube videos, including one by Nikachu appear to leak new updates that they purport to be coming soon, including new shops, new NPC’s, and new gameplay mechanics.

While none of the QOL updates we’ve discussed were included in these videos, with every new update Nintendo brings to the game, be it an Art wing for the Museum, or new NPCs, QOL changes come along for the ride too, meaning we should be on the lookout for these major changes being included in all future patches.

All The Latest Gaming News
More
Features
Mental Health in Gaming and Esports
Mental health is a topic still shrouded in shame and misunderstanding, but in recent years, there has [ ... ]
Features
The Dawn of the Remake
New games are out – remakes are in. Developers, as of late, seem more interested in remastering [ ... ]
Features
Stranger Than Fan Fiction – The History of Fan Fiction in Gaming
Fan fiction is ingrained in any large communities’ psyche. First beginning with Star Trek in the [ ... ]
Features
Animal Crossing New Horizons: Tom Nook is Evil, and I Can Prove...
Animal Crossing: New Horizons is huge. If you’re not playing it, it’s almost guaranteed [ ... ]
Features
Everything You Need to Know About New Shooter ‘Crucible’
Amazon Game Studios have announced their new third-person hero shooter Crucible. The game is free to [ ... ]
Features
Assassin's Creed Valhalla is the Game We've Been Waiting For
Ubisoft have announced the next title in the Assasin's Creed series; Valhalla. The Viking inspired [ ... ]
Features
Animal Crossing: New Horizons is Exactly What the World Needed
During the coronavirus pandemic, life has significantly changed for a lot of people. Events have been [ ... ]
Features
NVIDIA GeForce Now: Is It Worth Buying?
Cloud-based gaming services just keep coming. As well as Google’s Stadia, another cloud-based [ ... ]
Features
The Rise of Esports During COVID-19
For the past month and a half, the world has been sitting tight and hunkering down to wait out the course [ ... ]
Features
Facebook Launches Gaming App
Facebook, the reputed social media giant, had a huge announcement to make today that it is launching [ ... ]
Features
The U.S. Army Breaks into the Esports Scene
It's no surprise that we live in a digital age. Almost everything we do involves technology in some [ ... ]
Features
Facebook Gaming Adds Tournament Feature
Reputed social networking site, Facebook, is once again taking a step forwards in the gaming industry [ ... ]
Features
Do Leaks Help or Harm the Gaming Industry?
Gaming leaks are something we’re all familiar with, whether they’re unreleased cosmetic [ ... ]
Features
Glitches & Exploits: Game-Breaking or Good Clean Fun?
The literal meaning of an exploit in video games is the use of a bug or glitches, game system, rates, [ ... ]
Features
Video Games Break Records Amidst COVID-19 Self-Isolation
The Coronavirus outbreak has caused panic and fear across the entire world. In order to contain the [ ... ]
Features
A Look at Developer Streams and Their Importance in Gaming
Be it Fortnite, Apex Legends, or any other looking to make its mark in the gaming industry, giving more [ ... ]
Features
How Companies Like Blizzard are Coping With Coronavirus
Coronavirus has enshrouded a majority of the world into its ailment. The number of cases is increasing [ ... ]
Features
Everything you need to know about the Brawlhalla Winter Championships...
Brawlhalla competitive tournaments have gone from strength to strength in the last few years, and it [ ... ]
Esports Calendar
This website uses cookies
Cookies help us and our partners provide statistics. By browsing this website, you consent to the use of cookies in accordance with our Privacy Policy and Cookies Policy.
Accept & Close