ACNH is cheering up the world!

During the coronavirus pandemic, life has significantly changed for a lot of people. Events have been cancelled across the globe, stores are limiting traffic, and jobs are encouraging people to work remotely. It seems as if life as we know it has all but shut down-- but during the peak of the quarantine... a beacon of light appeared on the horizon: Animal Crossing: New Horizons.

On March 20, 2020, people were no longer confined to their homes-- they could explore and build on a beautiful deserted island filled with animal villagers and even their own friends. With calming gameplay, loveable characters, and a carefree overall vibe, the game has been significantly helping improve the mental health of people affected by the coronavirus. As a testament to its popularity, the game sold five million copies during its first month of release and still continues to sell more as people hunker down for the remainder of the quarantine.

Maddie 🍑
@roadtodusk
Celebrated @spideymalfoy ‘s birthday and graduation today on Animal crossing!!! I'm so thankful to have such lovely friends 🥺 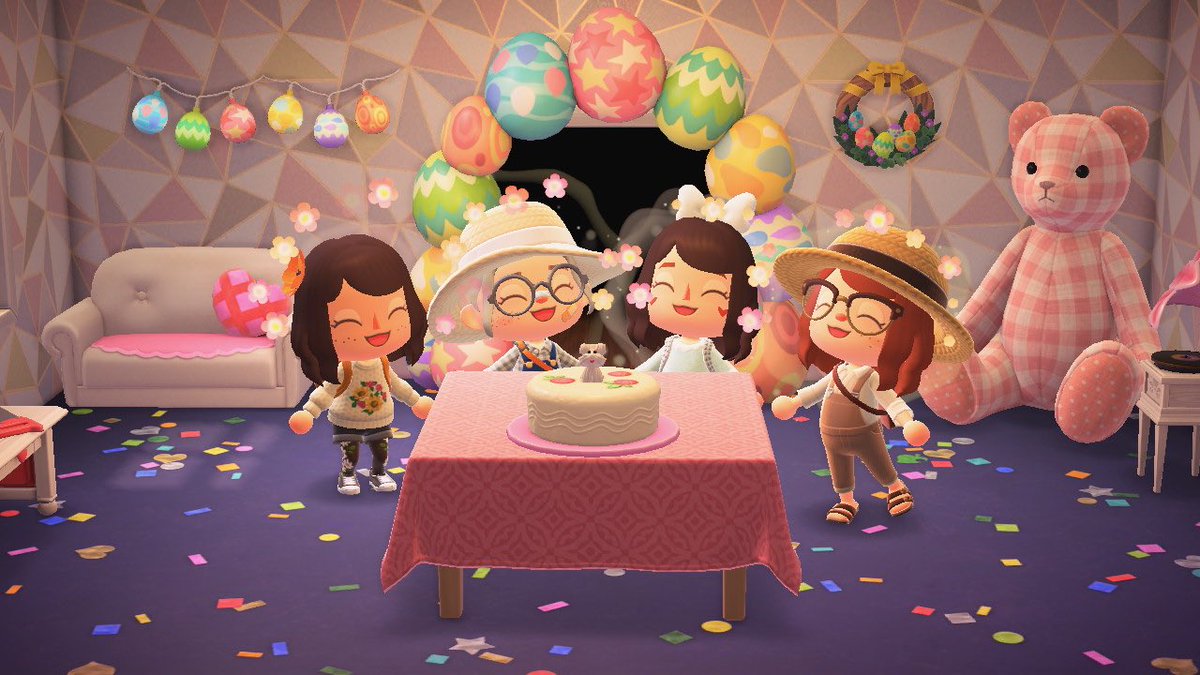 A couple went so far as to get married in Animal Crossing: New Horizons after their April wedding was cancelled due to coronavirus.

Sarah Tonin
@Sarah_Meowz
Today was supposed to mine and Mitchell's wedding day. So we got married in Animal Crossing 💕

Even Elijah Wood made an appearance in a fan's New Horizons island after she tweeted about turnip prices in-game. Wood took this as an opportunity to brighten the fan's day, complimenting her island and hanging out with her and her friends. Wholesome!

Artists across the internet have also lent their skills to ACNH, making everything from colourful tops to expressive paintings. The highly-customizable characters can wear a variety of different outfits and accessories, and can even decorate their homes with custom furniture and decor. One player recreated a Pokémon Tournament Center near his home, complete with Pokémon spritework wall decor since the establishment is temporarily closed due to coronavirus. Another player created a Katamari Damacy top for other players to wear, posting the download code on their Twitter account.

This isn't the first time that the Animal Crossing series has helped to significantly impact the mental health of its players-- the previous games in the franchise are embedded in the public self-conscious due to their appealing characters and calming vibe. Since the franchise's launch in 2001, Animal Crossing has left quite the impression on both casual and hardcore gamers. The non-stressful atmosphere of the Animal Crossing World is perfect for both hardcore gamers looking for a change of pace and casual gamers looking for a first new title to explore. The plot of the Animal Crossing games is what you make of it. The general concept in each is that you star as a human avatar that suddenly gets to become mayor of a town full of animals. It's up to you to build up this small town and create something beautiful, all while emotionally connecting with the townsfolk and shopkeepers along the way. The only linear element of the games is the realtor Tom Nook, who provides you with home loans for your ever-expanding house. Other than that, the Animal Crossing games are relatively open-ended-- as the player controls the game's flow and pace. Alongside the open-ended sandbox feel of the game, the series was notable for its differing town layouts, randomly-generated villagers, and relaxing all-day soundtrack.

Many people that grew up with the franchise still listen to the Animal Crossing music when doing things like studying or commuting, and judging by the countless number of soundtrack uploads and the sheer number of views that each of them has, this is a popular alternative to playing the game. Even if you don't have enough time to check on your villagers for the day, memorable music can help players get through their own real-life days.

It isn't just the music that makes this game special, however... it's the huge cast of huggable characters-- with fan favorites such as Rosie, to the loveable Pashmina, the cool Kid Cat, and the adorable Able Sisters. There's a character in Animal Crossing for everyone... whether you're sporty, preppy, silly, or cranky! The villagers help to make Animal Crossing players feel a little bit less stressed and anxious in their daily lives by cheerfully greeting, conversing, and surprising them with gifts and kind gestures. Writing letters to the animal villagers helps make them even happier than just interacting with them and after you've exchanged enough letters and presents-- your friendship is certain to blossom!

The game's overall feel is designed to make players feel as if they can jump right in and play at any time-- because they can. No matter what bizarre circumstances are present in the real world-- even if those circumstances are COVID-19-- the Animal Crossing villagers will be happy to welcome your online avatar into their world. And if you sit back, relax, and unwind long enough, you just might see that the island could be the best place to spend your quarantine. So hop on a Dodo Airlines flight and get started on your Animal Crossing adventure today!

Latest Gaming News
More
Features
US Army Esports – The Line Between Recruitment and Coercion
The US army is known for many things. One of those is being the third-largest active military force [ ... ]
Features
Todd Howard – Why Won’t You Give Us Elder Scrolls VI?
Look, I’m not going to beat around the bush here – The Elder Scrolls V: Skyrim is one of [ ... ]
Features
SypherPK: The University Dropout Who Became A Worldwide Success
In January of 2010, SypherPK, the famous Twitch icon, began his journey into the YouTube world. He started [ ... ]
Features
What Does the Future Look Like for Hyper Scape as an Esport?
Even though Hyper Scape battle royale has only been out for about a week, the topic of esports has already [ ... ]
Features
The Changing Tide in Esports
The esports world has been rocked by allegations in the past month, from sexual abuse to harassment, [ ... ]
Features
Hyper Scape Battle Royale - First Impressions
Seemingly out of the blue, Ubisoft Montreal released its first entry into the battle royale genre. Hyper [ ... ]
Features
What Is Next For Shroud & Ninja Following Facebook Gaming Rejection?
As of June 22, 2020, streaming icons Ninja and Shroud are now free agents. Microsoft stated that [ ... ]
Features
Lamborghini Refuses To Be Left At The Starting Line With Sim...
With movies such as Steven Lisberger's Tron, the idea of being completely immersed in [ ... ]
Features
Nintendo Switches Its Perspective on Mobile Gaming, Pulling...
After the failure of the Wii U in late 2012, Nintendo needed something, anything, to pull them back [ ... ]
Features
The Viability of Star Wars Squadrons as an Esport
When EA officially announced Star Wars Squadrons on June 15, it sent the internet into a flurry of conversation, [ ... ]
Features
Animal Crossover: Check Out These Creative Ideas in Animal Crossing!
Animal Crossing: New Horizons took the world by storm after its release on March 20, but the game is [ ... ]
Features
Review: Crucible is Amazon’s No Man’s Sky, and Means it Can...
Amazon's flagship game, Crucible, was released on May 20, 2020, to mostly mixed reviews. It is an [ ... ]
Features
Epic Games Store Exclusive 'Satisfactory' Now Has a June 8 Steam...
Epic Game Store exclusive Satisfactory is coming to Steam on June 8 after its exclusivity contract ended [ ... ]
Features
The Top 3 Most Exciting June Updates for Animal Crossing: New...
25/06: A new update is here! Check out the latest Summer Update info right here. June is here, and for [ ... ]
Features
Time Travelling in Animal Crossing: New Horizons - A Sin, or...
Time travelling in Animal Crossing: New Horizons (or TT in ACNH) is a hot topic. Whether you’re [ ... ]
Features
Mental Health in Gaming and Esports
Mental health is a topic still shrouded in shame and misunderstanding, but in recent years, there has [ ... ]
Features
The Dawn of the Remake
New games are out – remakes are in. Developers, as of late, seem more interested in remastering [ ... ]
Features
Stranger Than Fan Fiction – The History of Fan Fiction in Gaming
Fan fiction is ingrained in any large communities’ psyche. First beginning with Star Trek in the [ ... ]
Features
Animal Crossing: New Horizons – Updates We Desperately Need
Animal Crossing: New Horizons has been delighting fans worldwide for almost two months, and its popularity [ ... ]
Features
Animal Crossing New Horizons: Tom Nook is Evil, and I Can Prove...
Animal Crossing: New Horizons is huge. If you’re not playing it, it’s almost guaranteed [ ... ]
Features
Everything You Need to Know About New Shooter ‘Crucible’
Amazon Game Studios have announced their new third-person hero shooter Crucible. The game is free to [ ... ]
Features
Assassin's Creed Valhalla is the Game We've Been Waiting For
Ubisoft have announced the next title in the Assasin's Creed series; Valhalla. The Viking inspired [ ... ]
Features
NVIDIA GeForce Now: Is It Worth Buying?
Cloud-based gaming services just keep coming. As well as Google’s Stadia, another cloud-based [ ... ]
Features
The Rise of Esports During COVID-19
For the past month and a half, the world has been sitting tight and hunkering down to wait out the course [ ... ]
Features
Facebook Launches Gaming App
Facebook, the reputed social media giant, had a huge announcement to make today that it is launching [ ... ]
Features
The U.S. Army Breaks into the Esports Scene
It's no surprise that we live in a digital age. Almost everything we do involves technology in some [ ... ]
Features
Facebook Gaming Adds Tournament Feature
Reputed social networking site, Facebook, is once again taking a step forwards in the gaming industry [ ... ]
Features
Do Leaks Help or Harm the Gaming Industry?
Gaming leaks are something we’re all familiar with, whether they’re unreleased cosmetic [ ... ]
Features
Glitches & Exploits: Game-Breaking or Good Clean Fun?
The literal meaning of an exploit in video games is the use of a bug or glitches, game system, rates, [ ... ]
Features
Video Games Break Records Amidst COVID-19 Self-Isolation
The Coronavirus outbreak has caused panic and fear across the entire world. In order to contain the [ ... ]
Esports Calendar
pubg
PUBG Continental S2 North America
The 2020 PUBG Continental Series
league of legends
2020 LoL Pro League Summer
The premier circuit of League of Legends in China.
league of legends
2020 LoL Pro League Summer
The premier circuit of League of Legends in China.
counter strike
CS:GO_ProHouse Wuxi Villa Cup
Chinese LAN event hosted by Vision Esports featuring six teams July 23 - August 9
rainbow 6
Six August 2020 Major (LATAM)
The revamped Six August 2020 Major (LATAM) August 7 to 9
overwatch
Overwatch League - Week 27
Blizzard brings us another week of OWL action. August 8 to 10
overwatch
Overwatch League - Week 27
Blizzard brings us another week of OWL action. August 8 to 10
This website uses cookies
Cookies help us and our partners provide statistics. By browsing this website, you consent to the use of cookies in accordance with our Privacy Policy and Cookies Policy.
Accept & Close