VALORANT turns it on in Europe, with the next two weeks of IGNITION SERIES crowning the European kings

Another weekend, another VALORANT IGNITION SERIES event. The circuit turns back to Europe with the Vitality European Open, an open bracket tournament with an eight-team final stage which will take place from July 10th - 12th. Europe’s finest will battle for a prize pool of €15,000 (~£13.500).

After the initial qualification bracket, the teams were split into two groups of four from which only two teams each will advance into the knockout stages. According to Vitality, more than 128 teams had participated in the open qualifier. The playoff bracket will be held in a double-elimination format. All matches throughout the weekend will be played in a best of three format. It’s a thorough system that allows teams to showcase their skills and whoever emerges victorious will have a solid claim for the throne in Europe until next week’s WePlay! x IGNITION hits. It’s a good time for European VALORANT. 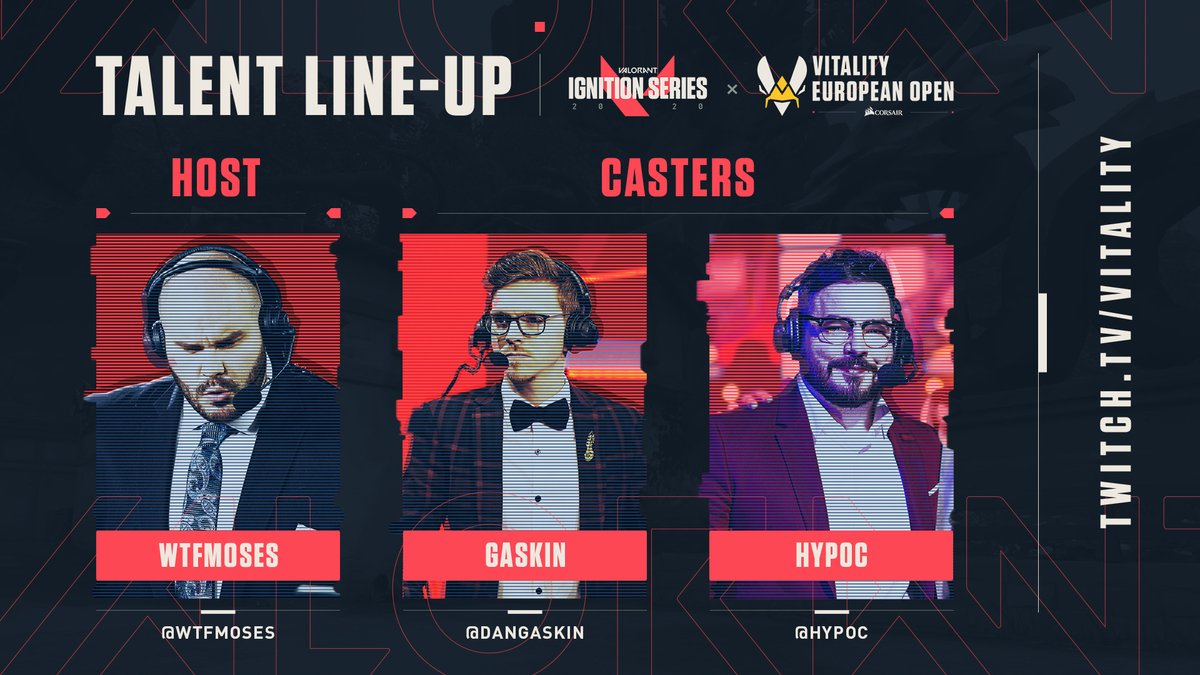 The first match between Apexis and need more DM will kick off the action at 3 pm CEST / 2 pm BST on Friday, July 10th on Vitality’s stream.

The groups shook out as follows:

G2 Esports
The newly assembled core of G2 esports is looking to prove themselves. A large number of maps played this weekend due to the Bo3 format, and the fail switch of a lower bracket, will leave little wiggle room for excuses. Due to the format, anything but a grand finals appearance would be a disappointment for this roster. Team captain mixwell has made a case for himself as potentially the best player in European VALORANT but the team assembled around him are no slouches either. ardiis of Fish123 fame has shown himself to be one of if not the best Operator on the continent and paTiTek has shown a sweet rifle throughout the early stages of VALORANT. Pyth is another CSGO veteran with T1 experience, having played with the legendary NiP core in 2016 and 2017. davidP is a player this roster has now repeatedly competed with and one has to wonder if an announcement is imminent or if the team is looking to go through the next streak of IGNITION events to stress test the Belgium player.

FABRIKEN
With HypHypHyp disbanded and Fish123 out of the picture, FABRIKEN is arguably the second favourites going into this tournament. The Swedish team around former Overwatch T2 player LATEKS has had a great start to VALORANT and most recently won the Rise of Titans tournament, a competition which saw many of the teams participating in this event as well. The player to watch out for on this team is probably Zyppan, who has shown that he has a nasty pistol and gets a ton of value out of Raze’s kit.

Apexis
Not much is known about this Turkish roster. In the qualifier, they beat another low profile team to qualify for Vitality European Open. Considering the competition in their group with both favourites stacked against them, they’re unlikely to make it out of the groups especially since all matches are played in the best of three format.

Need more DM
The Hungarian team need more DM has popped up in several European events and has started delivering decent performances in the last couple of weeks. During the Rise of Titans tournament, they narrowly lost against StartedFromCS in the semi-final. They have a small chance for an upset if they can continue on their trajectory, though they would’ve had an easier time in the other group.

Prodigy
Prodigy has not had a consistent roster, becoming a case study for the ship of Theseus. Bringing on arguably the best pieces of the old NiP line-up in rhyme and luckeRRR as well as former Overwatch League player HyP, who himself has had impressive wins in VALORANT already, the team has a solid foundation to build upon. It’s likely they will be playing for the group B victory just by the quality of their components.

Bonk
The Swedish roster won’t have an easy time in Group B. Bonkar might be a name for some who have kept up with European VALORANT, having just recently been let go by NiP. He also competed with Team Draken for the last Ignition Series event in Europe, the G2 Invitational, in which he took second place with Team Draken. Nobody else on the team has really carved out a profile for themselves yet in VALORANT. Bonk has competed with each other for a couple of weeks now but has yet to find their groove, going out early in the Rise of Titans event.

breadHUNTERS
breadHUNTERS are another question mark in this event. The Turks beat another low profile team in putsch in a 2-1. There are few other indicators as to how they will perform in this event. Given their competition, they are unlikely to make it out of the groups.

PartyParrots
The second team to go to playoffs will likely be PartyParrots, the team around Counter-Strike veteran of 15 years, ANGE1. At 30, he still showed that he has more left in his pro player career and has assembled a Russian mix around him which he has been playing with for a while. PartyParrots has some impressive trophies on their shelves, having beaten both Prodigy, which at the time were a mix with luckerRRR, rhyme and davidp, and FABRIKEN. Recently, they’ve been on a mild downswing, losing to need more DM in the Absolute Masters round of 16. They’re a safe pick to get out of groups, though going all the way at this event against the new G2 Esports roster and a sharp-looking FABRIKEN is unlikely.

VALORANT News & Tips
More
Valorant
FaZe's VALORANT Roster Boasts Ridiculous Skills And Personalities
FaZe recently announced VALORANT roster features four former Overwatch League professionals, some with [ ... ]
Valorant
What Are The Sentinels Doing Differently In VALORANT?
After a quiet entrance, the VALORANT esports space cannot deny the Sentinels any longer. With their [ ... ]
Valorant
Riot Games Has Disabled Killjoy For The VALORANT Invitational
While Killjoy has only just landed in VALORANT, she's already preparing to take a break as [ ... ]
Valorant
FaZe Clan Signs BabyBay To VALORANT Roster
Just days after Counter-Strike: Global Offensive favourite Jason "JasonR" Ruchelski [ ... ]
Valorant
Bonk Coach Salah: Ambition, Creating A New Style & Becoming...
The European VALORANT space is fluctuating, and Bonk is leading the charge. Filled with familiar faces [ ... ]
Valorant
Allied Esports Announces $15,000 European VALORANT Ignition...
Allied Esports has announced a European VALORANT Ignition Series featuring G2, NiP, Fish123, Vodafone [ ... ]
Valorant
Maksym Bilonogov On The WePlay! VALORANT Invitational And The...
This year hasn't had many highlights so far, let's face it. To be fair, there have been [ ... ]
Valorant
VALORANT Update Includes Feature That'll Inform You If Disruptive...
Expect some swift judgement when it comes to VALORANT thanks to a new feature that will tell [ ... ]
Valorant
Investigation: Why Aren’t EU Organisations Signing VALORANT...
Out of the 32 teams that made it to the main event of the latest Ignition Series in Europe, the Mandatory [ ... ]
Valorant
Riot Games Announces Act 2 Battlepass, Skins And Deathmatch...
With Act 2 just around the corner, Riot Games has announced what players can expect from the [ ... ]
Valorant
hoody Officially Steps Down From HAVU To Move On To VALORANT...
VALORANT fanatic Aaro "hoody" Peltokangas has officially stepped down from [ ... ]
Valorant
Learning From Sinatraa: Should Everyone Be Using LMGs?
When VALORANT came out, it looked and felt shockingly like Counter-Strike in a whole myriad of ways. [ ... ]
Valorant
davidp Completes G2 Esports VALORANT Roster
After being announced as the stand-in on the G2 Esports team for the Vitality European Open and [ ... ]
Valorant
Ignition Series x Mandatory.GG Cup Starts Tonight
Let's get ready to rumble as VALORANT's Mandatory.GG Cup returns to Europe as part of the [ ... ]
Valorant
Who The Best NA VALORANT Team Is And Why It Doesn't Matter
If you’re wondering why some of your favourite content creators are currently not releasing their [ ... ]
Valorant
VALORANT Players Find Easier Way To Complete Weekly Missions
Those crafty VALORANT  players are at it again and one fan thinks they've found an [ ... ]
Valorant
The TenZ Carry Threshold By The Numbers
After Cloud9’s recent performance at the PAX Invitational, there’s no argument that the [ ... ]
Valorant
Four Things We Learned At VALORANT’s PAX Arena Invitational
The North American VALORANT scene has been white-hot with densely packed tournaments featuring the ever-growing [ ... ]
Valorant
Killjoy Against The Zealots Of Pure Skill Church
When the new abilities of the 12th VALORANT agent Killjoy leaked, we didn’t have to wait long [ ... ]
Valorant
FaZe Clan Partner With Riot Games To Host The Biggest Event...
Hosting 16 North American teams, FaZe Clan and Riot Games will host their own Ignition Series tournament, [ ... ]
Valorant
Riot Games Accidentally Reveals VALORANT Agent Killjoy Early,...
Get ready for a brand new fan-favourite as VALORANT has just leaked Agent Killjoy. Someone at Riot [ ... ]
Valorant
VALORANT Players Discover New Hack That Allows Them To See Through...
The smoke is clearing as players have discovered a sneaky VALORANT  hack that allows [ ... ]
Valorant
Putting Players First: Why Tournament Organisers Are Failing...
It’s no secret that VALORANT is thriving. Merely two months after the release of Riot Games’ [ ... ]
Valorant
VALORANT Releases A New Ranked System For Competitive
Heading into Act II of VALORANT, a new ranked system has been introduced for the competitive mode. Act [ ... ]
Valorant
VALORANT Players Have Found A Way To Make Their Character Stutter
While stuttering is one of the most annoying parts of any game, a sneaky VALORANT fan has figured [ ... ]
Valorant
Orgless vs. Orgful - Team Culture Differences In VALORANT
While VALORANT has hardly got a storied history behind it, at this point it is safe to say that the [ ... ]
Valorant
Professional Team Vibes - PAX Arena Invitational Playoff Primer
Another weekend, another stop for the Riot Games’ IGNITION SERIES. This time we turn to North [ ... ]
Valorant
Leaked VALORANT Ranking System - 'Act Rank'
New VALORANT leaks suggest a new ranking system called 'Act Rank' will be coming into play in [ ... ]
Valorant
G2 Esports or TSM - North American vs European VALORANT
Since the start of time, North America has always rivalled Europe across nearly every single title in [ ... ]
Valorant
VALORANT Patch 1.04 Brings New Agent And Weapon Changes
The new VALORANT update is here, and Patch 1.04 comes with a ton of new updates to both Agents and weapons. [ ... ]
Esports Calendar
pubg
PUBG Continental S2 North America
The 2020 PUBG Continental Series
rocket league
RLCS X Fall Split Regional 1
Fall Split Regional Events (NA/EU) August - October
league of legends
2020 LoL Pro League Summer
rocket league
RLCS X Fall Split Regional 1
Fall Split Regional Events (NA/EU) August - October
rainbow 6
2020 Six August Major (LATAM)
The revamped Six August 2020 Major (LATAM) August 7 to 9
overwatch
Overwatch League - Week 27
Blizzard brings us another week of OWL action. August 8 to 10
overwatch
Overwatch League - Week 27
Blizzard brings us another week of OWL action. August 8 to 10
RLCS X Fall Split Regional 1
Fall Split Regional Events (NA/EU) August - October
rocket league
overwatch
Overwatch League - Countdown Cup - NA Final
rainbow 6
2020 Six August Major (NA)
Semi-finals of the NA Six August Major
overwatch
Overwatch League - Week 28
Blizzard brings us another week of OWL action.
overwatch
Overwatch League - Week 28
Blizzard brings us another week of OWL action.
This website uses cookies
Cookies help us and our partners provide statistics. By browsing this website, you consent to the use of cookies in accordance with our Privacy Policy and Cookies Policy.
Accept & Close