Xbox has just revealed the next nine games coming to Xbox Game Pass... and wow. We're in for a treat.

Xbox Game Pass
@XboxGamePass
Imagine this tweet was a magic 8 ball that you just asked "what games are coming soon?" 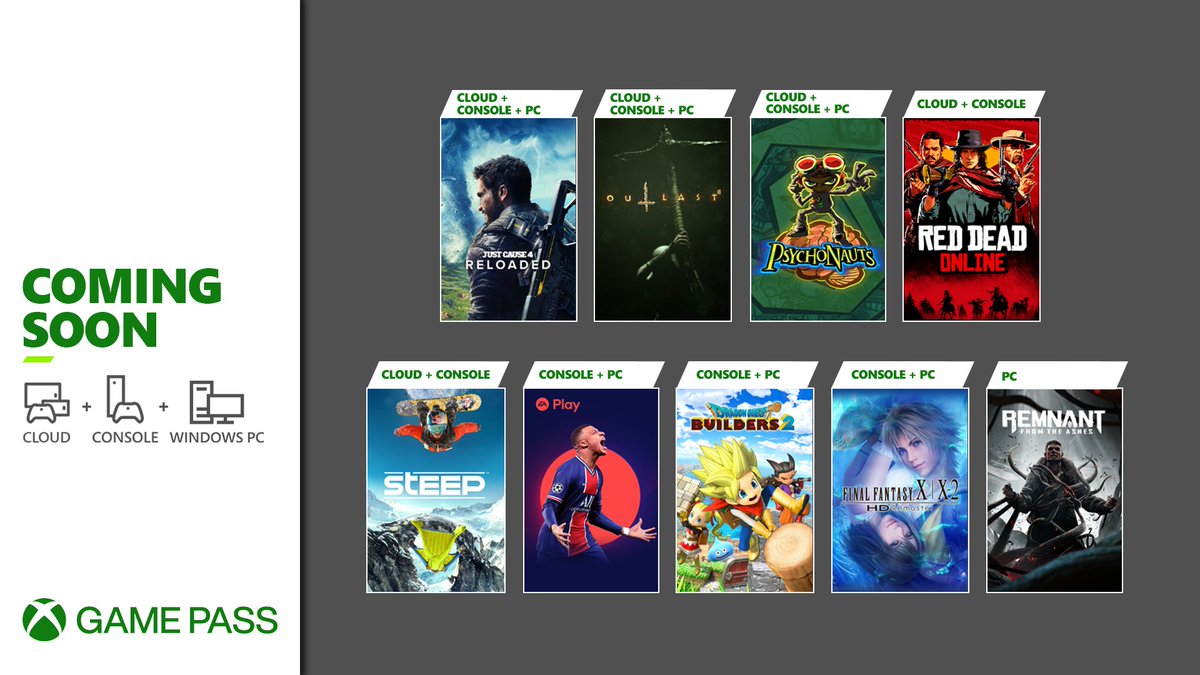 Which Games Are Coming To Xbox Game Pass?

When Are The New Games Coming To Xbox Game Pass?

Dragon Quest Builders 2 is coming on May 4 (Star Wars Day!), FIFA, Outlast 2, and Steep will be added on May 6, and the rest will be available on May 13.

What Is Dragon Quest Builders?

Which FIFA IS Coming To Xbox Game Pass?

The blog post says: "Xbox Game Pass Ultimate and PC members can hit the pitch and get great rewards when FIFA 21 is added to The Play List with EA Play, including a fresh EA Play Volta Squad Boost and FUT Season XP Boost."

"Sequel to the acclaimed survival horror game Outlast, set within the same universe as the first game, but with different characters and a different setting, Outlast 2 is a twisted new journey into the depths of the human mind and its dark secrets."

"Ride a massive open world across the Alps, where the powder is always fresh, and the run never ends. Tame the wilderness on the American continent in Alaska, a new region filled with challenges. The mountain is yours to explore. So, strap in, suit up, and drop in," reads the description on Xbox's site.

Which Final Fantasy Is Coming To Xbox Game Pass?

Both Final Fantasy X/X-2 HD Remaster are coming. Xbox writes: "Fully immerse yourself in the World of Spira as you enjoy over 100 combined hours of gameplay across the two classic titles."

What Is Just Cause 4: Reloaded?

"Just Cause 4 Reloaded delivers an expansive and explosive experience with new weapons, vehicles, and gear included! Soar through the skies at high speeds using the Skystriker Weaponized Wingsuit or cruise the roads of Solís using the Deathstalker Scorpion Muscle Car."

"A psychic adventure from the mind of Tim Schafer. Psychonauts follows the story of a young psychic named Razputin. Explore the fantastic realm of the inner mind – Join the Psychonauts!"

What Is Red Dead Redemption Online?

Xbox says: "Join millions of fellow players in Red Dead Online, now packed with years’ worth of new features, gameplay, and additional enhancements. Step into a vibrant, ever-evolving world and experience life across frontier America. Forge your own path as you chase down bounties, battle outlaw gangs and other players; hunt, fish and trade, search for exotic treasures, run Moonshine, and much more to discover in a world of astounding depth and detail."