In these first few weeks of Summer Split, the LCS broadcast has been the target of widespread criticism

It’s only been two weeks since the LCS and LEC returned for the 2020 Summer Split, but the two broadcasts have received wildly different feedback from fans and professionals alike. From the casters, skits and personalities, to the teams, players and overlays, the general sentiment has been that the LCS experience is worse than ever before. Even professional LCS players like Doublelift have chimed in on Twitter to express concerns over the quality of the broadcast.

So what’s wrong with the LCS, and what needs to change?

In truth, the problem with LCS is a multi-faceted one and not something that can be solved overnight.

Most glaringly obvious are the technical issues with the broadcast. As the USA is still in lockdown, the entire stream needs to be run virtually from the homes of casters and players. With all of the behind the scenes workers and technicians now forced to manage the show from home, it has become exponentially harder to troubleshoot problems quickly. The result is a buggy and unappealing experience, replete with audio cuts, black screens, and flickering. In a few cases, the overlay has displayed false information for entire matches, leading some viewers to believe that the overlay is being controlled manually. In Team Liquid’s first game, the number of towers they had taken was incorrectly displayed, and in TSM’s match against IMT, Fiddlesticks’ build was also incorrect.

Although these hiccups aren’t inexcusable with the current state of the world, they do detract from the viewer’s enjoyment significantly when they are so frequent. Combined with the annoyingly formatted overlay, the eyesore that is the LCS DOME ‘virtual studio’ and the general visual incongruity of different segments, it becomes a real chore to watch the LCS. Compared to the complete and cohesive visuals offered by the LEC, the LCS is jarring.

A Crisis Of Identity

More importantly, the on-air talent is just not as entertaining. While technical issues are likely to be ironed out soon, this is a much more deeply-seated issue.

When comparing the two western broadcasts side by side, the difference is like night and day. The LEC has recently received praise for their fun and unique broadcast, with the various personalities and talents able to fully express their creativity. Despite some people finding their silly antics “cringey,” the majority of viewers are loving the more memeable and nerdy tone. By giving their on-air talent the agency to plan, pitch and create almost any segments they want, the LEC has made their broadcast a joy to watch from start to finish.

Daniel Drakos
@DanielDrakos
One of the things I love most about working on the @LEC is the creative freedom I've been given when it comes to writing and pitching promotional pieces. 17 caster ads, Rap battles, LECtronic songs.
Proud of everything that we've accomplished together. 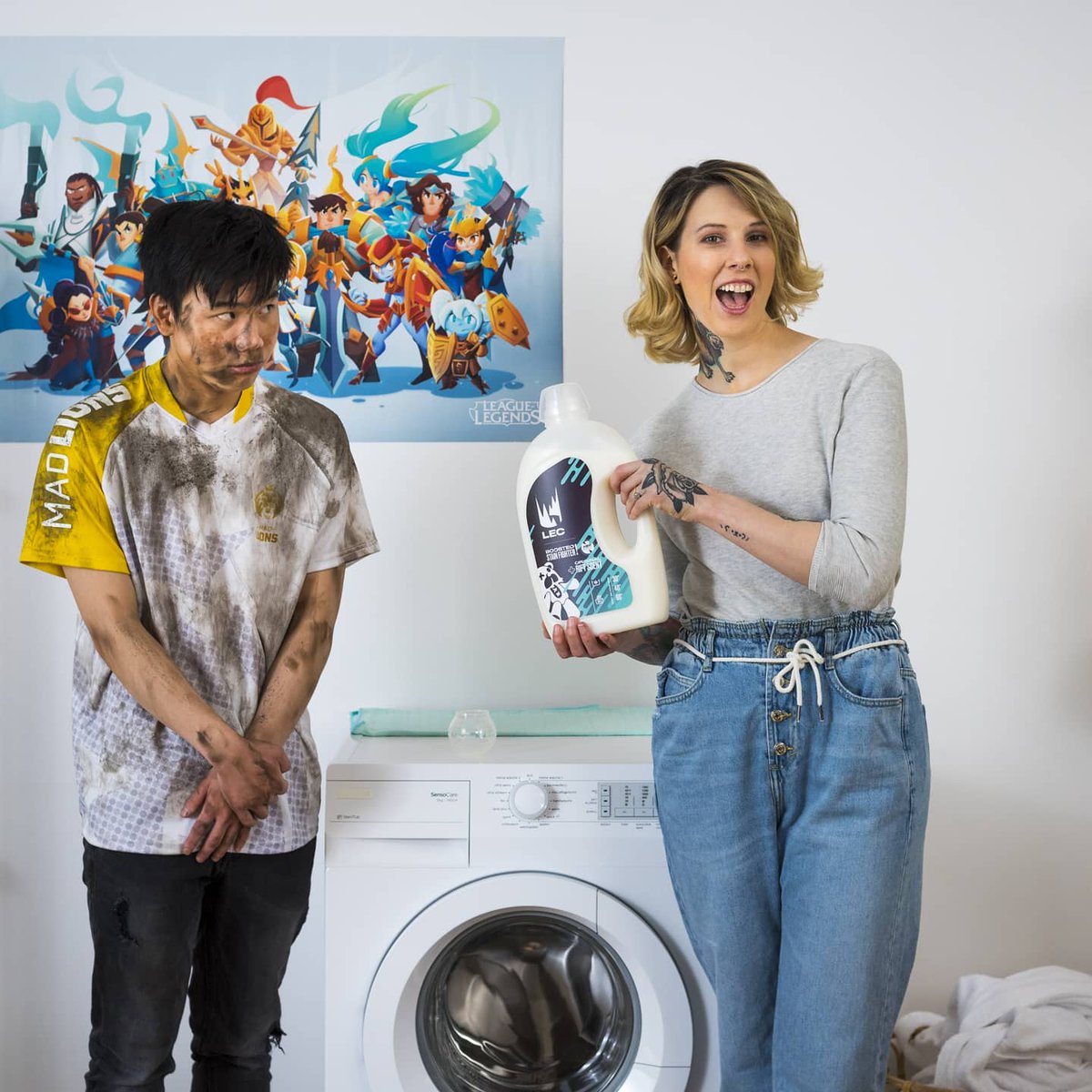 Since their rebrand in 2019, the LEC has completely embraced the unique position that esports is in, not trying to replicate the format of other sports. Traditional sports like the NFL have had decades to develop, whereas esports are a very new phenomenon. While sports are broadcast on television, esports are usually streamed on sites like Twitch which allow viewers to communicate with the streamer. This allows a whole new realm of possibilities which are inaccessible to televised sports, and the LEC team takes full advantage of this.

Furthermore, the target audience is completely different; most (but not all) League of Legends players are not the kind of people who love watching the Super Bowl. By recognising this and straying from the established norms, the LEC has put together an inclusive and balanced entertainment package with something for everyone; great skits, knowledgeable analysts, a focus on player narratives and highly competitive teams at the international level.

The LCS on the other hand, seems to be having an identity crisis. Historically the LCS has been seen as a more traditional broadcast, in the vein of something like the NFL. Rather than doing skits like the LEC does now, the LCS used to focus on deep analysis and discussion. This arguably worked quite well, and the LCS had its own identity as a more professional, buttoned-up broadcast. As Thorin suggests in his recent video on the same topic, the LCS likely has high-level executives who push this NFL style programme in an attempt to one day make League of Legends as mainstream as other sports, while also attracting sponsors.

Yiliang Peng
@TSMDoublelift
if the broadcast is consistently making mistakes with the overlay, showing the wrong Fiddle build, wrong replay, cringe "freestyle" rap, and then ends it with SushiDragon, it feels like a clown show. in another context showing niche content at the end of the show would be great
213
6813

Upon seeing the success of the LEC’s approach though, it seems like the LCS can’t decide what it wants to be. Does it want to be a mainstream, analysis-focused broadcast or an entertaining and light-hearted one? The result is a veritable Frankenstein’s monster of a broadcast, with the worst bits of both lazily stitched together. One minute you’re watching Le Tigress make a serious announcement about the BLM movement, and the next she’s joking around on Friday Night League and freestyle rapping. While the individual segments are not awful, the mix of such contrasting tones is extremely jarring and makes the show hard to watch. The LEC pulls it off through caster chemistry and wholehearted dedication, but the LCS feels like little more than poor mimicry.

As MonteCristo breaks down in his video, it was an especially bad decision to change Monday Night League to Friday Night League without considering the repercussions of it being the first LCS broadcast in two months. Instead of discussing the important storylines and setting the stage for the new split, viewers were treated to SushiDragon’s unique sense of humour and small talk between the casters. Ultimately, viewers watch sports for the players, teams and the storylines that they love. Although the LCS is pretty stale in terms of new talent and international prospects, by not clearly prioritising their narratives the LCS is betraying their players and organisations. How can viewers be expected to care about the players if the casters don’t even give them a reason to care?

It’s important to remember though that this is not the fault of the people we see on our screens; these decisions are made by higher-ups and, unlike in the LEC, casters have very little say in how the show is run. As Sjokz said in a recent interview with Travis Gafford, this is not caused by a lack of talent either. All of the casters are undoubtedly knowledgeable and passionate about the game, and this shows clearly when they participate in other content outside of the LCS.

Simply, this is just a gross misuse of talent. Outside of LCS, SushiDragon is a popular and well-liked Twitch streamer known for his wacky and technically impressive comedy shows. His humour is perfect for long, one-off performances like the LCS Spring Split After Party, but falls flat when shoehorned into the middle of the broadcast in short segments.

MonteCristo
@MonteCristo
I fucking love Sushi Dragon, but simply turning LCS into his stream is not a coherent creative direction.
If you want to do that, then you have to let him make every broadcast decision.
24
991

Perhaps the best example of this mishandling of talent is Ovilee, who inexplicably left the LCS broadcast team this split to continue working with the LCS publishing team as a freelancer. She still creates content for the LCS, but is no longer a part of the broadcast. There has since been an outcry of support for Ovilee, as she was a real highlight of the show. With no new talent to replace her fun and bubbly personality, fans have been feeling her absence acutely. Though the circumstances of her departure aren’t clear, it seems like a mistake to not try and keep her on the show by any means. Alongside beloved caster Jatt’s departure to Team Liquid, it appears that the LCS broadcast is bleeding talent uncontrollably.

A Plan Of Action

Without detailed behind the scenes information, it’s difficult to pinpoint the exact reasons for such a downfall. With such unanimous backlash from the community though, it’s clear that change is needed.

Many people have already suggested a complete rebrand, similar to what the LEC did in 2019. As Sjokz explains in her interview with Travis Gafford, this simply isn’t enough though. The LEC did not just change their logo and studio and suddenly become an amazing broadcast; the process took over two years, with the seeds of change sprouting in 2018. For the years prior, EU LCS had always been hamstrung by NA LCS, and the public sentiment towards the broadcasts was the complete opposite to what it is today. The EU LCS constantly received criticism for their broadcast despite their great teams, and NA was the place to be. Moving there was seen as a promotion by EU LCS employees.

It got to a point where something had to give; the EU LCS didn’t want to play second fiddle to NA LCS anymore. The first, most important step was getting everybody on board. From the top to the bottom, everyone had to be completely committed to the changes. Those who weren’t in agreement moved-on while new, passionate talents were hired to replace them. Things only started looking up when radical changes were made with the combined support of directors, managers and casters. In reality, the rebrand was just a watershed moment that allowed all of the previous efforts to come to fruition. The new visuals and logo gave the LEC a completely new identity, removed from the EU LCS of the past.

Eefje Depoortere
@sjokz
That especially hits hard for me and @RiotQuickshot - we remember being down and out completely in 2015-2018 unsure of what the future of EU would look like. So thank you and know we self reflect EVERY DAY and strive to improve. Sorry to be emo 🥺❤️
11
1416

With the state of LCS now, it seems like only a similarly scaled effort will put the two broadcasts back on equal footing. Even if they start now they are two years behind in the process - and that’s a big if, considering the top-down culture of LCS that we’ve seen so far.

Riot is obviously aware of the issue, as they released an article addressing the concerns raised by the community following the first week of LCS. Unfortunately, only the surface-level problems like technical issues are addressed, with no mention of long term reforms. With the news that viewership levels are the highest they’ve been since 2016, and Riot projecting LCS to be profitable for the first time in 2021 maybe they see no urgent need for big changes.

With the third week of LCS imminent, we’ll just have to see what improvements have been made so far and hope for the best.