As Epic Games continues to dominate the battle royale market, curious players are rightly asking, where do Fortnite dances come from?

If you're ready to jump off the Battle Bus and chuck a Boogie Bomb to throw some shapes, Fortnite can be much more than a battle royale brawler. Since the game's release, players have seen Epic Games' ambitious title merge into pop culture in a big way. Keeping its finger on the pulse of society, Fortnite has cashed in on the latest trends in terms of its wardrobe choices and dance moves. Whether it be adding Stranger Things skins or copying the latest Tik Tok trend, developers are making sure Fortnite is as up to date as its players are.

In Fortnite, dance moves are shown off through emotes. Although some can be bought in the shop, others are unlocked via the Battle Pass or can be skin-specific. It would look a little odd to see The Mandalorian's Din Djarin try and perform the Predator's Bio-Helmet Online emote in Chapter 2 Season 5. When it comes to rare dance moves, the ones you really want to be looking for are probably long gone by now. If they ever come back into the shop, make sure you grab the likes of "Rambunctious", "Fresh", and "Llama Conga".

Where do Fortnite dances come from? 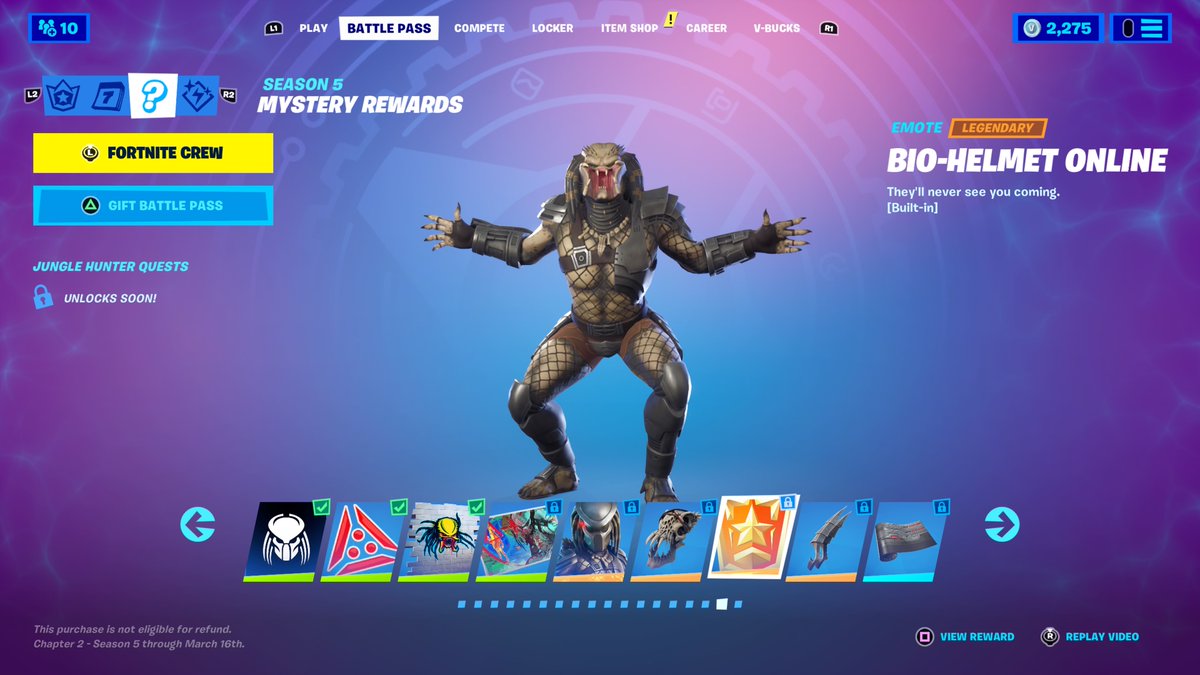 Since early on in the game, emotes were a way of showing off emotions (and your moves) in Fortnite. Not everyone wants to mic up and actually talk to their squadmates; meaning emotes are an easy way to express yourselves through the usually silent skins. Perhaps the most famous dance move is "Boogie Down", which came alongside its own #BoogieDown competition where players were encouraged to film themselves coming up with their own dance - with the possibility of it being added to the game. Ahead of the curve, Epic effectively turned Fortnite into Tik Tok before the viral sensation had really taken off.

Season 2 is when Fortnite dances hit the mainstream. This makes emotes from back then are like gold dust. Despite Chapter 2 dividing fandom and leading to a mass exodus of pro-players, it was also the first time Epic introduced two-player emotes. These days, the wait for the Battle Bus is filled with whole squads dancing together as they want to show off their latest emotes. Emoting has branched out even further as big streamers including Tyler "Ninja" Blevins and Imane "Pokimane" Anys have also popped up as emotes

Last year, you could even Rickroll opponents with the introduction of an emote based on Rick Astley's "Never Gonna Give You Up". Jump forward to today, everyone from Doja Cat to The Weeknd are immortalised in emote form with their chart-topping songs. Some see it as an honour to be remembered in Fortnite, and while few get to do it as a skin, there are plenty who have their own claim to fame with Fortnite dances. The problem is, not all of them are welcome.

Has Epic got into trouble with Fortnite dances?

It's all well and good keeping your player base engaged with your game, but just like Twitch has clamped down on using someone else's music with its wave of DMCA takedowns, Epic has found itself in some seriously hot water with Fortnite dances. It's hard to remember the last time Epic didn't get into trouble for a Fortnite dance. As well as The Fresh Prince of Bel-Air's Alfonso Ribeiro and Scrubs actor Donald Faison accusing the game of ripping off their signature moves, the parents of Russell Horning (better known as "The Backpack Kid") filed against Epic.

Although Horning popularised the Floss - with a little help from Katy Perry - he can't actually claim he invented the move. Even though the famous "Dab" emote can be traced back to Skippa Da Flippa pulling the move in Migos' "Look at My Dab" from 2015, the move has popped up in anime and manga long before that. The first person to officially launch proceedings against Epic was Terrence Ferguson, aka 2 Milly. Ferguson maintained that the "Swipe It" emote that came as part of Chapter 1 Season 5's Battle Pass was a rip-off of his "Milly Rock" dance. Since then, the developer has been inundated with lawsuits.

Basically, most of those who want to sue Epic can't because it would be almost impossible for them to trademark a dance move. In the case of Ribeiro, it would be attributed to the creators of Carlton, rather than the actor himself.  The Copyright Office’s guidance is also clear as it states: "Individual movements or dance steps by themselves are not copyrightable". It would probably be easier just to thrown another Boogie Down contest to find more Fortnite dances.

From a PSY-inspired "Ride The Pony" to "Floss", the Connor McGregor -esque "Boneless" to memories of Napoleon Dynamite with "Groove Jam", each Fortnite dance has its own complicated history. Now, you just need to decide which one you're going to pick when you dance over the body of your latest kill. Seriously though, don't. There's nothing worse than seeing a sore winner dancing on top of their rival with "Electro Shuffle".