Legends, guns, and tons of fun.

Invitationals are a fun way for pro players to blow off steam in a semi-competitive atmosphere, and more than entertaining for the fans. On June 16, the inimitable TeamSoloMid announced they were hosting their very own online Apex Legends Invitational Tournament (NA), to take place on June 28. 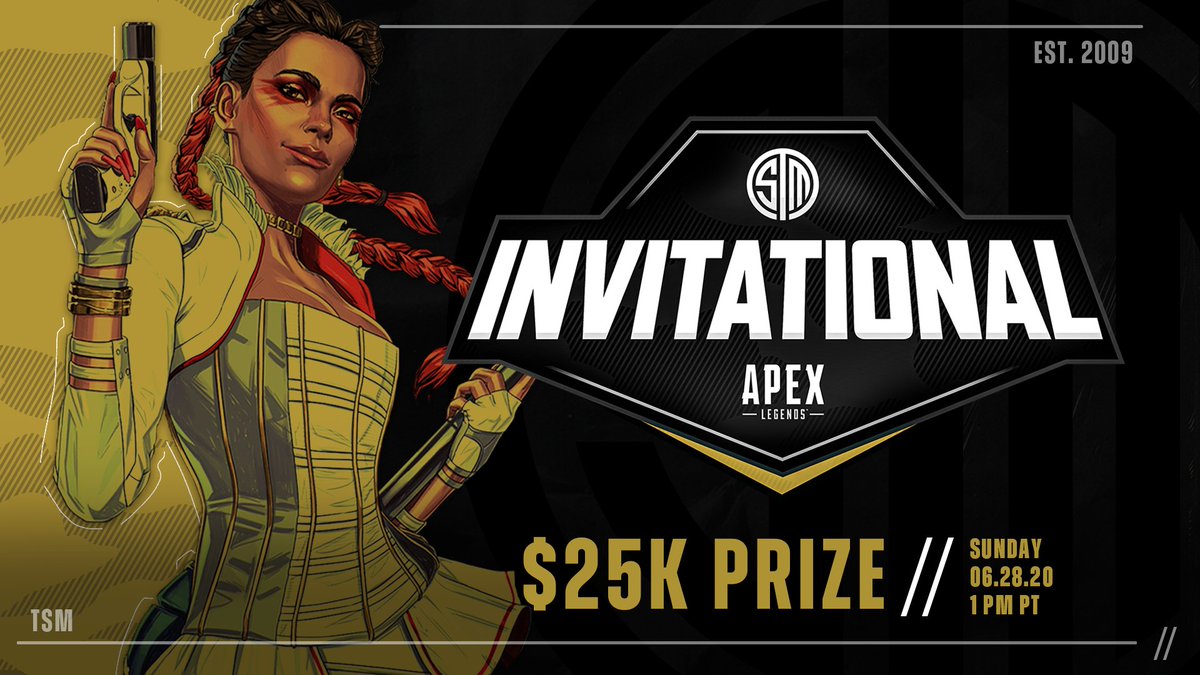 The tournament is Loba-centric, and each team must feature one player using the High Society Thief. Another stipulation is the team captain must recruit one content creator and one pro player to join them on their team, making for some spicy matchups. This also means tournament powerhouse teams like NRG Esports (Nafen, Rocket, Frexs) and Rogue (sweetdreams, dropped, Snip3down) can’t compete together in that line-up.

The TSM event will feature a $25k prize pool, spread amongst the top four teams, out of the 20 who will be participating.

Here’s what we expect to see at the TSM Apex Invitational.

Which Legends and Team Setups Can We Expect to See?

As the rules of the tournament state, to celebrate our new Apex Legends queen, Loba must appear on every team, but who else will join Ms Andrade? The team set up has been cemented for a long time in the Apex competitive arena; Wraith, Pathfinder, and Wattson was the standard. However, since Pathfinder suffered his devastating nerf at the hands of Respawn devs (and to a lesser extent, so did Wraith) the team picks may be surprising.

Based on current pick rate stats, we still believe Wraith will feature on almost every team. As for the third, a wildcard option could be the most viable. As the content creator teammate is there to inject some fun and chaos into the matches (as well as show off their considerable skill, don’t get us wrong) it’s possible we’ll see Octane, Crypto and Caustic show up too.

Mirage’s recent dramatic abilities rework could make him a viable option for competitive Apex too. When his most recent buffs were released, we reported that Mirage may finally be a viable character, and now appears in Tier A of our Apex Legends tier list, with his pick rate on the rise too.

Lifeline may be selected to join the teams too, thanks to her new D.O.C powers allowing her to revive both of her teammates at once.

Our predictions for team load-outs are as follows:

Time will tell if our predictions become reality.

How will the players use Loba?

As she’s meant to be played – stealing things. We will no doubt see some hilarious plays from teams using Loba’s Black Market Boutique to snatch high-tier items from right under the enemies nose, as well as Loba’s Jump Drive Bracelet being utilised to perform slick flanks (or retreats).

What Guns will the Players Opt For?

The gun meta is relatively unchanged over the course of Apex Legends history, and we need look no further for the possible weapons used than GGRecon’s Best Apex Legends Weapon Loadout for Ranked. This guide (obviously) states the R-99 is a god tier gun (we won’t be taking questions at this time) along with the equally as deadly Wingman, Mastiff, and Flatline. Our best prediction for these Invitational matches would be an R-99 or Mastiff, paired with a Flatline or Longbow, with the Wingman being swapped in and out for any of those.

But again, anything can happen in this Invitational, so a Mozambique could pop into any one's loadout at any time, just for the meme.

Obviously, care package weapons are the ones we all really want, so look out for plenty of teams scrambling over each other, bullets flying, as they all vie for the Peacekeeper or Devotion.

Plenty of the captains and players are absolute beasts, so the predictions we make could end up being completely wrong (sorry), but here is who we think will beat out the opposition and make it to the top 4 (in any order)

When does the action start, and where can I watch?

The action kicks off June 28 Sunday (1pm PT / 9pm BST) and will be streamed via official TSM broadcast platforms. Make sure you tune in to the TSM Apex Legends Invitational, for what could be some of the craziest and most entertaining Apex Legends matches this year.