TSM may have won this Major, but the other teams aren't too far behind.

Team SoloMid have claimed the trophy of the Rainbow Six: Siege November Major. This has been the first offline event for North American teams in over half a year. Players and teams were eager to get back onto the battlefield and proved how different online competition really is. In the end, the favourites lost out and gave way to a new North American powerhouse - TSM.

These players began their Major campaign with a close win over Oxygen Esports. It took them two overtimes, but eventually, they got through to the Upper Bracket Finals. Jason “Beaulo” Doty and Bryan "Merc" Wrzek delivered strong performances to lock in the win, but they had to face Spacestation Gaming next. SSG put up a fantastic show. They really hadn’t been this competitive in months and overwhelmed TSM to enter the Grand Finals.

So TSM had to take a detour and face DarkZero next. While DZ managed to make it a close affair, Beaulo and his men eventually won out and advanced to the Grand Finals, where SSG were lying in wait with a map advantage already. Back in August, DarkZero Esports had used their default map win to completely wipe TSM off the server in two quick maps. But Spacestation Gaming didn’t get around to play for the win, as TSM overwhelmed them on three straight maps. They’re now the reigning Major champions and the first R6 team to win an offline event in ages. So what does this mean for North American Siege?

TSM have obviously vied for the top spot in quite some time. We shouldn’t forget that, during the August Major, they absolutely crushed every team that wasn’t DarkZero. With DZ now out of the way, it was only a matter of time until they would make a dash for the trophy. In our preview of the event, we already highlighted the incredible individual progress of virtually all TSM players. Emilio "Geometrics" Leynez Cuevas and Bryan "Merc" Wrzek, in particular, have greatly improved their performance ever since the US Division Stage 1. With Jason “Beaulo” Doty and Matthew "Achieved" Solomon topping the player rankings for Stage 2, they have become incredibly dangerous.

Rainbow Six Esports
@R6esports
He hit a hot streak just in time to push @TSM to victory ðŸ”¥
Your North American #SixMajor November MVP for day 3 is none other than @TSM_Merc! 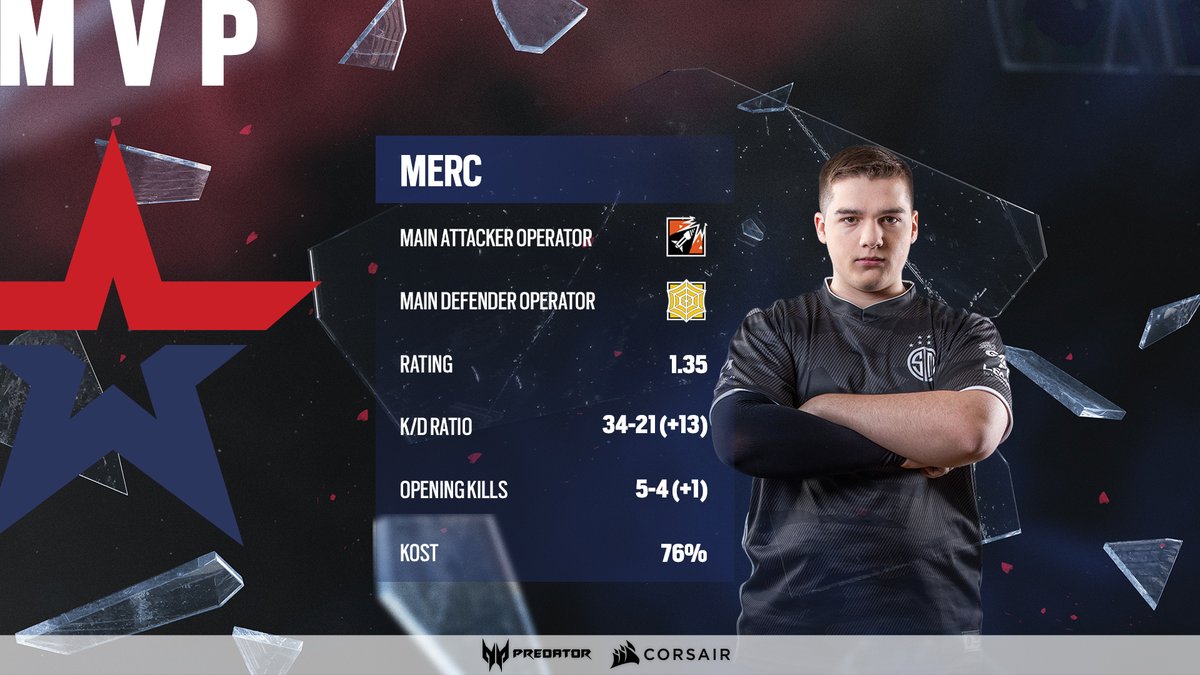 DID TSM WIN OR DID THE OTHER TEAMS LOSE?

We can also safely dismiss some of the counter-arguments that try to delegitimise this victory. For one, DarkZero fans might want to bring up Paul "Hyper" Kontopanagiotis’ absence during practice just before the Major. The player apparently battled an undisclosed health issue which might have prevented him from attending the event. Fortunately, at the last minute, he was confirmed to appear alongside the rest of the DarkZero roster. Of course, it stood to question whether he’d be able to deliver his usual show, as he was (and is) one of the heavy hitters on the DZ camp.

But Hyper was apparently unfazed by whatever had troubled him before, as he put up a fantastic individual show, pulling off a 1.20 rating. He maybe wasn’t as dominant as during Stage 1 or the August Major, but that was very much in line with the entire roster underperforming this weekend. The biggest let-down of the event was Matthew “Hotancold” Stevens. He recorded a 0.87 rating across this Major, far removed from his 1.23 rating back in August.

So, overall, it appears as though TSM have dominated their competition and are here to stay for the long run. However, there are a few positive signs for the rest of the teams. Setting aside the Grand Finals, this Major has actually been a much closer affair than the previous one. Back in August, Oxygen dropped out after two very one-sided losses. This time around, Davide “FoxA” Bucci and his men brought a total of three maps all the way to overtime, finishing another one on a 5-7 scoreline. As it stands, they’re more than capable of competing with the likes of DarkZero and even TSM; they only choke in the most crucial moments. But this is something they can fix, which would make them yet another competitive force in the race for first place in North America.

Finally, Spacestation have made huge improvements. Obviously, their Grand Finals loss is a huge disappointment and goes to show that they still have a lot of work ahead of themselves. But still, they have achieved solid victories over DarkZero and even TSM in the Upper Bracket Finals. Most crucially, all of this took place on LAN. This is all that counts once the coronavirus pandemic is behind us. All the DarkZero victories will become almost meaningless if they fail to deliver in offline environments - and the same holds true for Team SoloMid.

Their continued success depends on the individuals retaining their level, as Spacestation and Oxygen Esports are closing in fast. Even DarkZero might just have had a bad few days. With months of downtime until the next big event, these teams will have the opportunity to identify mistakes and improve their gameplay. TSM won’t get a chance to defend their newly acquired title right away, and when they finally do, they might face a completely refreshed North American playing field.