When the VALORANT closed beta launched, it took the worldwide player base (or at least the NA/EU-wide player base at first) a while to get accustomed to the game. Of course, despite how sick the best in the world may be now, we have yet to see anyone come close to truly mastering it, and we probably won’t for a while -- but early on, everyone came in together, fresh-faced and wide-eyed, with the only significant disparity in skillset being those players with previous extensive Counter-Strike experience rising to the top faster than others. And though they may have had a leg up, VALORANT still feels different, flows much the same, but plays functionally differently to CS, so even these players have had some learning to do.

But it wasn’t just the lucky few from the closed beta who improved and grew. Even those competitive or simply attentive players who may not have made it into the beta (although it did seem as though most everyone did) were learning, trawling through the subreddit, absorbing information, strats, callouts, playstyles, and etiquette through osmosis from the Twitch streams on in the background (!drops anyone?), checking out highlight reels on YouTube and arguing about what seems broken on Twitter. So by the time the game launched for everybody, it didn’t take long for the new players to catch up.

Sure, Iron players will always be Iron, and god aimers with decent fps fundamentals will probably touch Immortal no matter what. But within these clumps of players, the disparity between the players who had beta access and those who did not closed fairly quickly. We can contrast this to the development cycle of another multiplayer competitive FPS game like Overwatch. When OW was in closed beta, just like VALORANT, a lot of players invited were high-level players from other, similar fps games. But Overwatch’s depth, feel, and mechanics were so unlike any other game before or since, that the several months the closed beta went on gave these players an absolutely massive advantage over everyone else at launch, even the avid viewer.

This skill gap simply isn’t there in VALORANT and the one that is present is between the Irons and the Immortals. And while the hidden MMR of the game is keeping the games relatively close across teams, good players have noticed that the vast majority of their games are lopsided in skill distribution within each team. These games are characterised by the good player carrying their team versus the enemy team’s good player carrying their team, with the rest of both the carries’ respective teams all but dead weight. The Immortal player and Overwatch League caster Brennon Hook cited this phenomenon in his tweet complaining that the majority of his games were like this.

Brennon Hook
@BrenCasts
Idk how other people feel but I would like to see @PlayVALORANT ranked release sooner rather later.
It feels like the unrated queue doesn't haven't upper or lower limits to the mmr it queues you with meaning you get a ton of games that are essentially "you vs their carry" unfun. 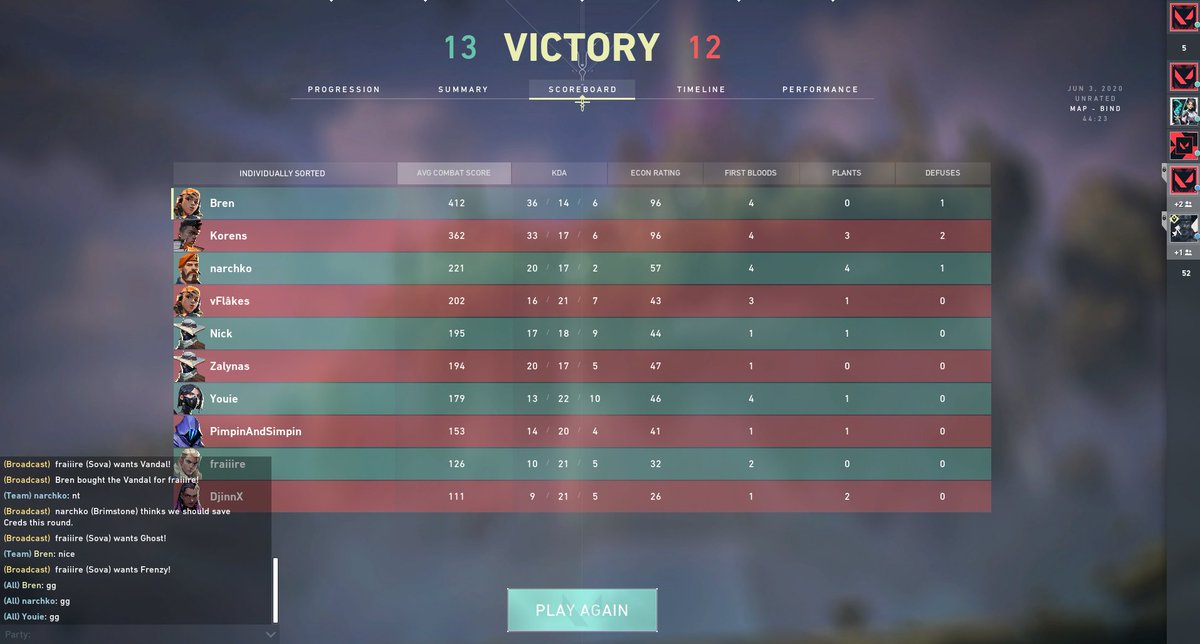 Other prominent players and community figures, such as the CS pro DaZeD, found it a little harder to articulate their exact misgivings with VALORANT with only an unrated mode, but were still unable to keep from voicing their opinions about the way the game “feels” right now. This may be attributed to the common downfall of any unrated mode - even in an ideal world where each game is close and fair and every member on both teams are similarly skilled, an unrated game would still be less likely to scratch a truly competitive player’s competitive itch - because there are no stakes. They simply matter less. Without a shiny badge or an ELO number going up or down, or even the knowledge that the enemy players are sliding up or down the ladder, the games do not feel as good. Ranked simply hits different.

Sam M
@GODaZeD
Anybody else feel valorant a little lame without ranked?
28
1206

A ranked mode in any game is a beautiful, elegant solution to an age-old problem. In a competitive game, players of any skill level and drive level are going to want to compete to see who is better, or improve, or simply play with their contemporaries. Short of organising tournaments for everyone under the sun, there is only one way to make every game for every plebeian matter like just a small slice of a championship game. Ranked. And the sooner it comes, the better. Riot says they want to see how the game plays out in its current state before adding the feature, with the much larger player count and new game features and flow. However, from the eye test it is hard to see if the game is fundamentally any different to how it played in beta, beyond a few much appreciated, but relatively minor changes.

The problem is only going to get worse. Riot has pleasantly surprised us with a patch only one week after release, fixing a lot of issues and making promising steps in a number of important directions. However, more than anything, true to the very core of why this game was developed in the first place, for hyper-competitive players to hone their skills and compete in a thunderdome of gaming, players want a reason to grind. They want a metric for improvement. They want the thrill of competition that anyone can get, not just those who compete in tournaments. They don’t really care if things are a little busted at first and if Sage one-tricks would’ve abused the terribly broken 20m wall to climb to a higher rank than they deserve. They just want ranked. If Riot at all can, they should give it to them.