Can the Justice walk a similar path as the Dragons and the Mayhem?

The Washington Justice is the latest team to undergo a particularly rough roster revisioning. After a complete walloping from the Shock this past weekend, a defeat from the Valiant a week ago, and a loss to the Gladiators in the May Melee, the Justice look completely outclassed, outspent, and out of ideas. It seems that the Justice’s troubles are not going to fix themselves any time soon, and it warrants observations into how — what used to be a promising season — turned into such a depress-fest for the Justice.

Halfway through the season, the Washington Justice decided to move from having a mixed roster to having an all-Korean roster. Historically, this has worked on several occasions but if history has anything to teach us, if you approach it in the wrong way, immediate results are going to be very difficult to come by and could completely ruin your season. To be blunt, simply having a roster of Korean players is not the automatic answer to success as the Toronto Defiant proved in 2019. To understand the context of what the Justice are doing, we first need to look at some case studies.

Only two teams have made the transition into becoming all-Korean rosters in the Overwatch League. There’s the Shanghai Dragons, who started with an all-Chinese team in 2018 before becoming legendarily infamous for not winning a single game in the first season, thereafter, transitioning to an all-Korean roster + Diya in the 2019 season. Then there’s the Florida Mayhem who started with an all-Western roster in 2018 but throughout the off-season and 2019 season, kept flip-flopping between the signings of Korean players and Western players, not making a hybrid team but rather a mish-mash of different players that didn’t necessarily come together. The differences in how these teams handled their restructures is night and day.

The Shanghai Dragons had a successful restructure for the following reasons.

For the Mayhem, they were another team that had a miserable first season. Really only able to beat the Shanghai Dragons once a stage, the Mayhem got one or two upset wins to land at 11th place out of 12 teams. We know a lot about what went down from an interview with their General Manager, Albert "yeHHH" Yeh. After the first season, the team was facing two options; bring in new Western talent and perform as a mixed team or the team could bring in Korean talent from Contenders and fully commit to an all-Korean roster. A mixed roster was the call early on, but as the team continued to not find any success, the decision was made well into the season to release the Western players they had already acquired in order to make way for new Korean players and staff, many of whom would barely end up performing until the end of the season due to visa delays. All of these different mistakes led to the Mayhem finishing last place, 20th overall in 2019.

Here’s how the Mayhem found themselves in the pit for the 2019 season.

McGravy
@McGravy
As Mayhem transitions to a full Korean team, I will be taking my time to explore other options. This has not killed my drive, I got a taste of the stage and I'm ready for more. ðŸ˜ˆ In the meantime I'll start turning on the stream a little more and answer any questions that I can.
59
976

Of these two, the Florida Mayhem happens to be the cautionary tale for teams in the Overwatch League. There’s nuance and a lot of thought that needs to happen when building a roster, and mid-season pickups have to strengthen the team, not completely disrupt the direction. If you commit to having players on the roster, it says a lot about your management if you abandon them in the middle of the season, with no real solid plan when it comes to their replacements. Now, if players don’t end up working out that’s okay, but to discard them and throttle their careers mid-season does not speak well to your team.

NOT HEADING THE WARNING SIGNS

The Justice had a mediocre first season in the Overwatch League. Barring a surprising 6-1 stage 4 finish in 2019, the Justice were unnoticeable throughout the GOATS meta, and finished 17th overall. But despite the relatively rough start, people were hopeful for the Justice coming into 2020. They were keeping their popular DPS duo of Corey and Stratus, ELLIVOTE would finally eligible to play after a long visa process, and they rounded out the roster with rOar from the LA Gladiators. Additionally, the Justice would be putting on five homestands, meaning they would be travelling the least out of any team. On top of that, Bawlynn would serve as their General Manager after a successful run as the Community Lead for both Team USA and the LA Gladiators. For the coaching staff, they were bringing in JohnGalt from the Gladiators as head coach and Sup7eme from the Hangzhou Spark. Also, Bani would be making his debut as a coach after playing for the Houston Outlaws and Team Canada for two years. Overall, while it didn’t seem like the best roster on paper, it was certainly a team who could contend their way into the top 12 under the right conditions, as many power rankings from analysts and experts predicted.

However, their season didn’t start off too hot, LullSiSH would still not see any playtime due to visa troubles, and their early battles were against tough teams like Paris, Philly, and New York, including an incredibly peculiar loss to the London Spitfire at their own homestand. By the 2nd time they had hosted, their only wins were against Boston and the Outlaws. Not great, but not abysmal, and they certainly had great moments when facing off against the tougher teams. However, as the league transitioned to online play, it only got worse for the Justice, winning only one map in the entire month of April. To make matters worse, both franchise players Stratus and Corey announced their departure at the start of May.

It’s incredibly unfortunate that the Justice lost their star DPS players in the middle of the season, but again, these weren’t unfixable problems. There were still ways the Justice could’ve kept themselves in the running for a decent season. That is until the Justice kicked off their revisioning on the worst note possible. Widely considered by many in the community as a baffling decision, the Justice quite bluntly announced the removal of Bawlynn and Bani, both who were widely loved and appreciated by fans and members of the community. 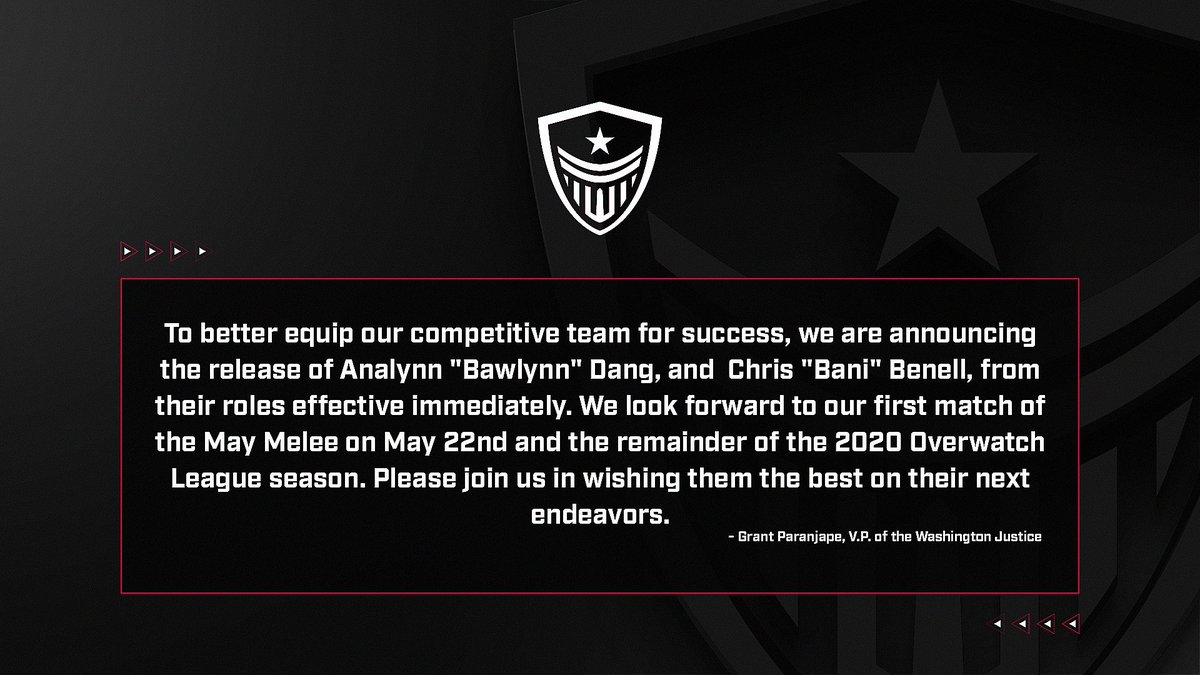 The Justice were widely criticized for the tone and nature of this announcement. Not many community figures viewed this as a good move from the outside looking in but there are more layers to what this implicates on the side of the Justice’s management. What does the removal of a GM and an Assistant Coach signify? Well, a GM is generally responsible for signing new players, providing the general facilities and management for the team, and being a resource for the players, in the words of yeHHH “my job is to make sure they [the players] don’t have to worry about anything besides playing Overwatch”. Now, if Bawlynn was not doing what she needed to do for her players and team, that would be understandable for her removal, the same goes for Bani. If Bani wasn’t providing the proper or correct coaching to the players, then it would be warranted for them to not have a place on the team. However, according to Corey that did not seem to be the case.

corey
@Corey_OW
damn, if any of you think lynn and bani were the problems on that team then you're terribly mistaken LOOL
198
3944

No other players made public comments on the matter, but if Corey was outspoken enough to say specifically that these two individuals weren’t a part of the problem, it calls to question what exactly lead to their removal? The argument that can be made that is the Justice were looking to have an all-Korean roster, so they needed to remove the staff members that wouldn’t fit with the new type of team. Speculating on the reasons, if the language barrier was the reason, it begs the question why you would keep and promote American staff member PRE to General Manager? It’s very confusing and doesn’t publicly or outwardly explain why the Justice are making direct and intentional changes to benefit the way the team operates. If finding a bilingual experienced GM in this environment was too hard, why fire someone with an impressive resume and who has seemingly already effectively managed a mixed roster.

Again, we don’t know the whole truth on the inner workings of the Justice, in fact we might not know any time soon. But to me, these decisions do not hold up to scrutiny based on the information we were given. Furthermore, as a consequence of this new direction, ELLIVOTE and JohnGalt would depart from the team. To illustrate the situation the Justice had found themselves in, keep in mind that signings and departures took place at different times. Here is a rough overview of their status at the time:

When you look at this squad both with an eye test and statistically, this is not a strong roster. None of the aforementioned players inspire the confidence to be stand out talent going into next season. Later on, the Justice decided to round out the roster with Stitch and JJANU, formerly of the Vancouver Titans, JJANU being a contender for MVP last year. At the base level, picking up former members of the Titans is huge. They were grand finalists and winners of the regular season, that has to mean something, some might say. We’ll have to see how this implementation works out, but my hopes aren’t high. Some pieces may work better together than separately. The 2019 Titan’s biggest advantage was their team synergy, the best players were given the opportunity to make the biggest impact and they played around each other so well. Simply taking players from that roster onto your team doesn’t automatically mean you’ll get the same performances out of them. This is especially true for a player like Stitch, who had never had a consistent starting position on the Titans. For him to suddenly become a starter for a roster again is a big jump, and it does not help that he is still in South Korea playing on high ping.

It seems that the Justice need a lot more depth on their roster if they want to keep their season alive and more if they want to live it up in the next. However, in the situation everyone is currently living, it seems incredibly difficult to add new members to the roster that can play NA games, consistently scrim with the team, and who aren’t already being sought after by teams with deep pockets. The current outlook for the Justice’s season is grim, as they’re only one win above the Boston Uprising, who have been increasingly getting better and better as the season goes on. Again we have to ask, how exactly have Washington Justice's moves helped them to work towards short and long term success?