They’re still a very new team, and they’re already giving TSM a run for their money.

Version1 have been around for less than a month, but they’re already trying to shake things up in the North American VALORANT scene. They make every match exciting, even though they may not come out on top every time - yet. GGRecon takes a look at their wins and their losses, with special attention for their match-up against TSM.

Jordan "Zellsis" Montemurro, who famously pulled off an ace in his very first round playing for Cloud9 in Counter-Strike: Global Offensive (CS:GO), is once again making moves - this time in VALORANT. He started with his current squad a week into February when they got signed by Version1.

Sure, Version1 aren’t reigning over NA by any measure. Heck, they didn’t even manage to qualify for the upcoming Masters. But they absolutely kick against the establishment and can make it damn difficult for teams like TSM. At the very least, they make it compelling for their fans.

The Qualifier for Challengers 3 gave viewers the full Version1 experience - the good and the bad parts. In the round of 16 for this first stage of the North American Champions Tour, Version1 met Rise on Split. Rise started on the attacking side, and got 11 out of the 12 rounds. For your ranked teammates, that means it’s time to forfeit. But Version1 didn’t give up. With a 10-round deficit, they couldn’t allow any more mistakes, and they did just that. Rise didn’t win a single round after halftime, and Version1 brought it all the way back to 13-11. They cleaned it up on Icebox, and took the series 2-0, to move on to the quarterfinals. 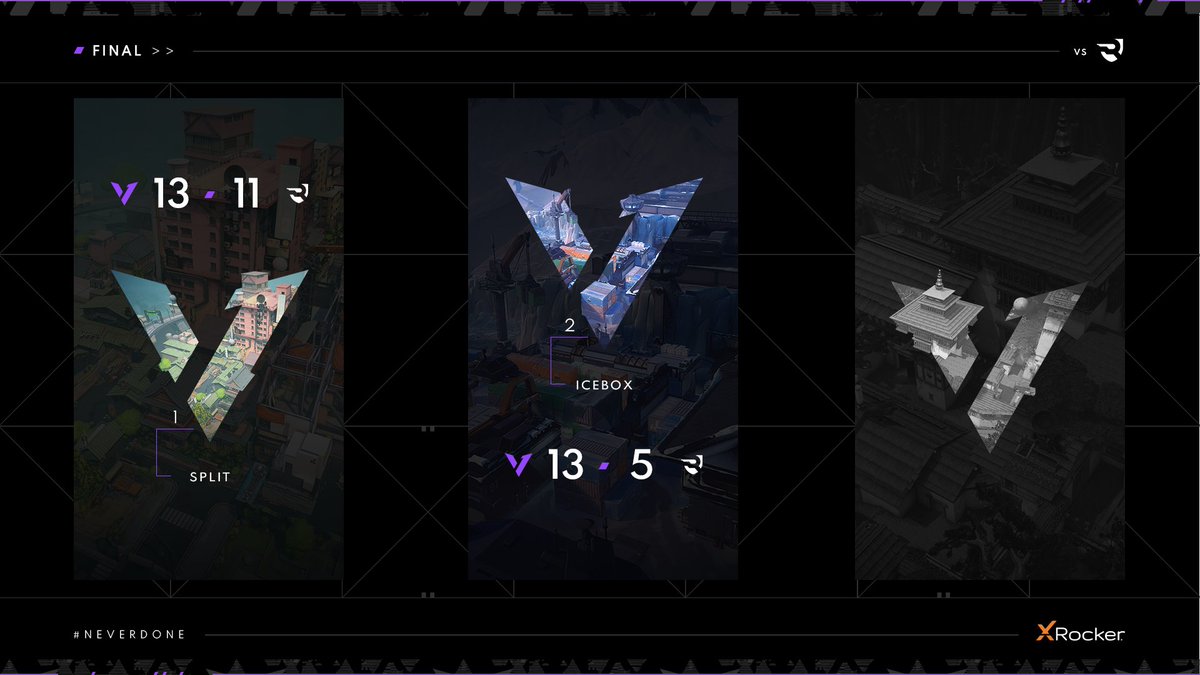 The quarterfinals had something else in store for Version1. They faced off against TSM. Version1 were the heavy underdog, of course. But as they’ve shown before, they’re ready to fight.

Icebox was not a pretty sight for Version1. Despite it being their pick, they ran into TSM’s defence without much of an answer. On his own stream, Zellsis talked about what happened. “We just threw a lot of rounds on Icebox. We threw the T-side pistol round, and it kind of spiralled out of the way.” It didn’t help that Wardell got a lot of Operator kills either. Zellsis played as Sage on Icebox, and it’s his responsibility to get the spike planted on offence. He made it clear that he wasn’t happy playing that role, so expect to see Version1 play Icebox differently next time.

The next map, Ascent, was a completely different story. This is where we see what Version1 can do. They only let TSM have three rounds in the first half, as they got a comfortable 9-3 lead going into halftime. On top of that, they ended the first half with an ace from Anthony "vanity" Malaspina. It’s a change of pace for the boys of Version1, and an incredible performance against a team as strong as TSM.

But it was too late. Version1 had lost their momentum, and TSM came swinging back. Version1 had to fight to even take the game to overtime, and they pulled that off. It was the last round they would win, as TSM eliminated them from the Qualifier.

With that, Version1 aren’t making it to the North American Masters. There’s always a next time, but it feels bad to lose out in such a fashion. Zellsis knows it all too well. “We are good, but we - I don’t know, we choke. We choke hard. We choked against FaZe; we choked against TSM…” It’s not a pretty look.

It’s quite surprising, though, how quickly Version1 have manoeuvred their way into the North American scene. They’re still a very new team, and they’re already giving TSM a run for their money. If they’re already making a name for themselves after less than a month, imagine what they could do with more experience. Don’t be too surprised when you see Version1 pop up in the next Masters.

VALORANT News
More
Valorant
VALORANT Breeze Map: Release Date, Teaser, Leaks
Riot Games has stayed on course on their roadmap for their tactical FPS shooter VALORANT, releasing [ ... ]
Valorant
Astra And Skye Could Get Big VALORANT Buffs Next Act
Riot Games is once again looking at reworking its VALORANT agents, and has teased some big [ ... ]
Valorant
Riot Games Reveals Plans For VALORANT 5-Player Queues
The bane of any player's life whilst grinding through a ranked playlist is being paired with teammates [ ... ]
Valorant
How A Team Of Streamers Knocked The Crown Off The Kings Of Korea
For the first time in VALORANT history, Korean powerhouse Vision Strikers suffered a loss. The team [ ... ]
Valorant
How Esports Needs To Change To Support Women In Competitive...
Developers, tournament organisers, and esports organisations understand that a lot of effort is needed [ ... ]
Valorant
Riot Reportedly ‘Launching Match Fixing Investigation Amongst...
Following the investigations into match-fixing in Counter-Strike: Global Offensive (CS:GO), carried [ ... ]
Valorant
Shroud Hits Out At ‘Uncomfortable’ VALORANT Feature
Having announced his official retirement from professional Counter-Strike: Global Offensive (CS:GO) [ ... ]
Valorant
TenZ Rises To Stardom As VALORANT Competitive Scene Lights Up
Tyson "TenZ" Ngo has taken the world by storm with his stellar performance in VALORANT. Considered [ ... ]
Valorant
Why Overwatch Players Are Taking Over VALORANT (And Darwin Would've...
Despite their low numbers, it keeps happening. For the last couple of months, they've been part [ ... ]
Valorant
100Thieves VALORANT Coach On Probation And Fined After ‘Threatening...
Following 100Thieves' fifth-placed exit from the VALORANT Champions Tour Masters, Riot Games have [ ... ]
Valorant
What Is The Secret To APE Prince’s Post Plant Setups?
The VALORANT Champions Tour (VCT) is rolling into its inaugural Masters’ event, and South Korea [ ... ]
Valorant
VCT Player Of The Week: babybay - From OWL Star To Masters
Following their dominant first place finish in the VCT North America 2021 - Challengers Three tournament, [ ... ]
Valorant
Can NUTURN Gaming Make A Claim For The VCT: Masters Title?
There are few teams better at submitting their opponents before the spike is even planted than NUTURN [ ... ]
Valorant
Top 5 CS:GO Maps Which Could Potentially Inspire New Maps In...
VALORANT had been steadily rising in popularity since its initial launch back in June 2020. Its growth [ ... ]
Valorant
Raise Your Edge Rise Up
Life is full of surprises, and EU VALORANT just adds a little extra spice to it. Raise Your Edge have [ ... ]
Valorant
How To Play Astra In VALORANT
VALORANT has introduced a new Controller Agent for Act 2 named Astra. She has been one of the most [ ... ]
Valorant
Pro VALORANT Players Asked ‘Not To Teabag’ During Matches
Riot Games has delivered a warning to its professional VALORANT players and asked them not [ ... ]
Valorant
After 53 Straight Wins, How Could Vision Strikers Suffer Their...
Fifty-three straight wins. That is the current win streak of the titans of South Korean VALORANT, Vision [ ... ]
Valorant
Ethan Joins 100 Thieves - Can They Regain The Number One Spot?
In what came as a shock announcement to many, Ethan “Ethan” Arnold has officially joined [ ... ]
Valorant
Can South Korea’s Most Aggressive Team Find Their Way To VCT:...
Styles are what make fights. To see teams impose their own view onto a game and see how different one [ ... ]
Valorant
Shroud Calls For New VALORANT Agent Astra To Be Nerfed Before...
The VALORANT agent pool is set for one of the largest shake-ups yet, with the arrival of the devious [ ... ]
Valorant
Riot Games Reveal LANs To Return In VALORANT And League Of Legends
It's the moment we've all been waiting for. LAN events are back, and Riot Games has kicked the [ ... ]
Valorant
How Did ZFGaming Take A Map Off South Korea’s Most Dominant...
South Korea’s most dominant VALORANT team, Vision Strikers, suffered an uncharacteristic map loss [ ... ]
Valorant
How To Fix The Crashing Issue In VALORANT
VALORANT is one of the most popular First-Person Shooter (FPS) games since its official launch in 2020. [ ... ]
Valorant
VCT Player Of The Week: Food - Bringing Envy To The Top
Another week, another VALORANT qualifier, and this week's thrilling competition ended [ ... ]
Valorant
Riot Games Announces New VALORANT Tournament For ‘Marginalised...
Since its release in 2020, VALORANT has wasted no time bursting onto the first-person shooter [ ... ]
Valorant
Can Zunba Carve His Own Path In VALORANT?
Not too often do legends of one esport transition into a different title entirely, however, former Overwatch [ ... ]
Valorant
Alliance: Icebox Has A New Contender
If you've caught some VALORANT streams on Twitch this week, chances are it was a North American [ ... ]
Valorant
Koosta Runs It Back [Interview]
Since its debut in 2020, Riot Games’ VALORANT has been steadily rising and attempting to solidify [ ... ]
Valorant
VALORANT Devs Discuss New Game Modes, Shorter Games And More...
It's the battle of the hero shooters as Apex Legends and VALORANT continue to [ ... ]
Esports Calendar
rocket league
RLCS X Spring: The Grid (NA)
It's North American's turn to score points for qualification to the World Championship. Matchday 5 - Round 1
rocket league
RLCS X Spring: The Grid (NA)
It's North American's turn to score points for qualification to the World Championship. Matchday 5 - Round 3
overwatch
2021 Overwatch League
Blizzard's OWL is back for the 2021 season! West Group
overwatch
2021 Overwatch League
Blizzard's OWL is back for the 2021 season! East Group
overwatch
2021 Overwatch League
Blizzard's OWL is back for the 2021 season! East Group
overwatch
2021 Overwatch League
Blizzard's OWL is back for the 2021 season! East Group
valorant
VALORANT Champions Tour
VCT 2021 features three levels of competition -Challengers, Masters, and Champions. Challengers is a regional competition and winners will qualify for the Masters. Korea Stage 2 Challengers - Decider Match
This website uses cookies
Cookies help us and our partners provide statistics. By browsing this website, you consent to the use of cookies in accordance with our Privacy Policy and Cookies Policy.
Accept & Close