Vancouver holds a lot of promise going into the 2021 season.

With teams undergoing massive restructuring and others looking to completely rebuild from the ground up, a team like the Vancouver Titans stands to do well for themselves in the upcoming offseason. Intentional or not, you cannot ignore that they’ve stumbled into some promising pieces that, if given the proper support, are not too far off making a convincing argument for an upper middle of the pack finish at the end of 2021.

Does this in any way shape or form absolve them of the recent controversy with regards to them parting ways with their championship calibre 2019 roster? Absolutely not, but we have to give credit where credit is due; the Titans have some bright pieces that should make the community optimistic, albeit cautiously, about the team moving forward. Vancouver doesn’t need to change much; however, they do need to build out their roster to become dangerous.

Vancouver Titans
@VancouverTitans
It's time to silence the critics!
@sHockWaveOW outclasses one of the league's best DPS in @SpiderTech's Tale of the Tape! 🥊
#ForceOfNature #OWL2020 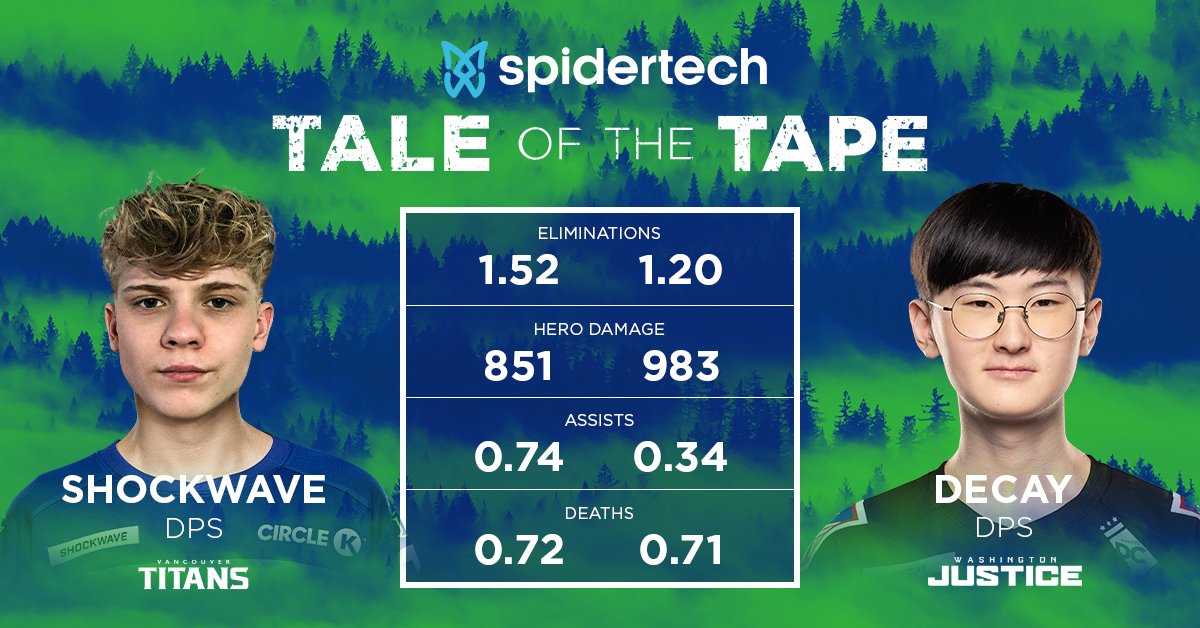 Starting from the top, head coach Steven "Flubby" Coronel is one of North America’s best-kept secrets and having him withing the ranks of the Titans is a big bonus. When it comes to doubling the value of the resource provided to him, he is on a very short list of coaches who not only can pull off a functional roster but also make it shine. The work and relative success he was able to achieve in Overwatch Contenders North America with Second Wind is unparalleled, and that particular set of skills should be considered a boon for the Titans as they build out their 2021 roster. If Vancouver can secure Flubby for the 2021 season than the team has already put a good foot forward.

If given a full and proper season to compete, there is a good chance that Niclas "sHockWave" Jensen is much more of a fixture in the standout rookie class of 2020. His performance on a team that, from the outside, was seemingly rushed and patchworked together, is simply impressive. What happens when we put him in a position to succeed? With the uncertainty of where Overwatch is headed in terms of format, sHockWave provides the safest bet a player can; flexibility and a proven track record. The Titans will end up with one of the better western DPS players by the end of the year if they play their cards right. 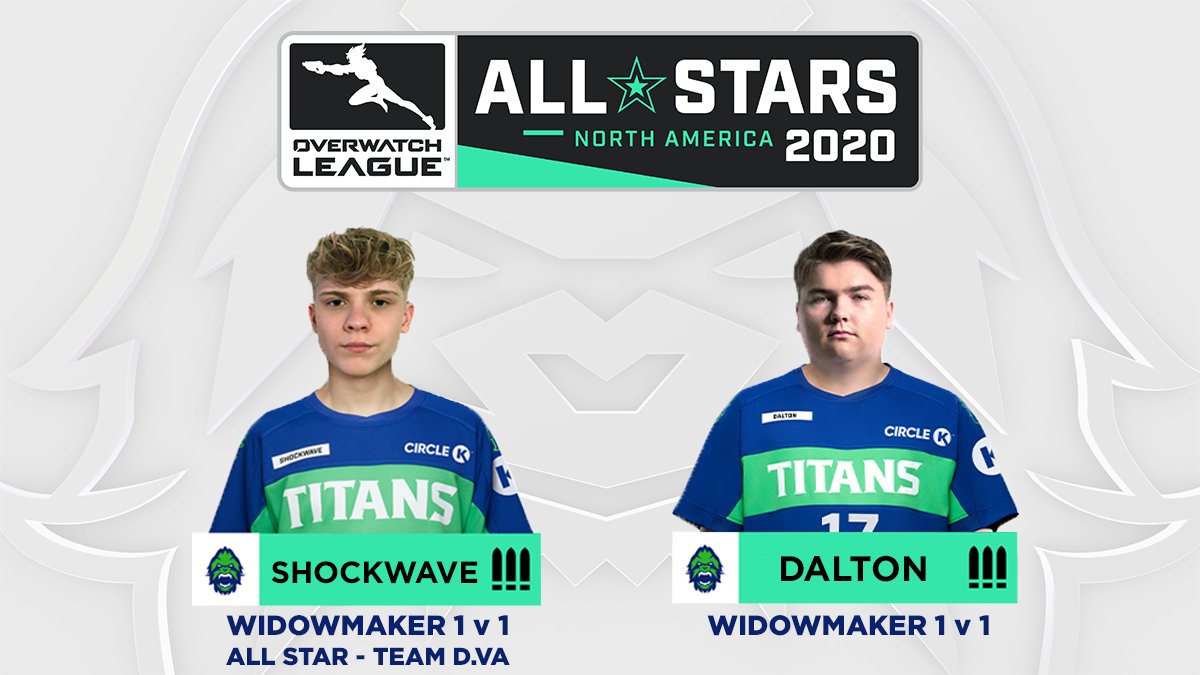 Samir "Tsuna" Ikram and Dalton "Dalton" Bennyhoff are a potent western hitscan duo that covers all the bases you could ask for, and both of them carry some impressive track record to boot. Tsuna assisted the London Spitfire’s legendary academy team, British Hurricane, in their 2019 efforts and Dalton worked with the Los Angeles Gladiator’s academy team, Gladiators Legion in their impressive 2019 run. These two alongside someone like sHockWave is a recipe for success if Vancouver wants to stay a primarily western team. This gives them a competitive DPS core that can play any look you can throw at them, something that cannot be understated when we look at the possibility of Hero Pools returning for the 2021 season.

At support, you’ve got Carson "CarCar" First. Not only is he a former member of the Philadelphia Fusion’s prestigious academy team, Fusion University, but someone who is bulletproof on main support. This is the backbone of your team and someone who you can rely on, someone that the team has already relied on during their 2020 Overwatch League attempt. Statistically speaking, CarCar continues to impress. On Brigitte, he scores the second-highest final blows per ten minutes, is within the top five most eliminations per ten minutes, and is fourth in hero damage done per ten minutes on Brigitte across a loss ridden season. When you see the names, he’s put past, that is the definition of impressive, especially considering the team he played for.

Vancouver Titans
@VancouverTitans
The key matchup against the @BostonUprising comes from the supports! 💚💥💙
@SpiderTech has you covered with the stats for Tale of the Tape! 🥊
#ForceOfNature #OWL2020 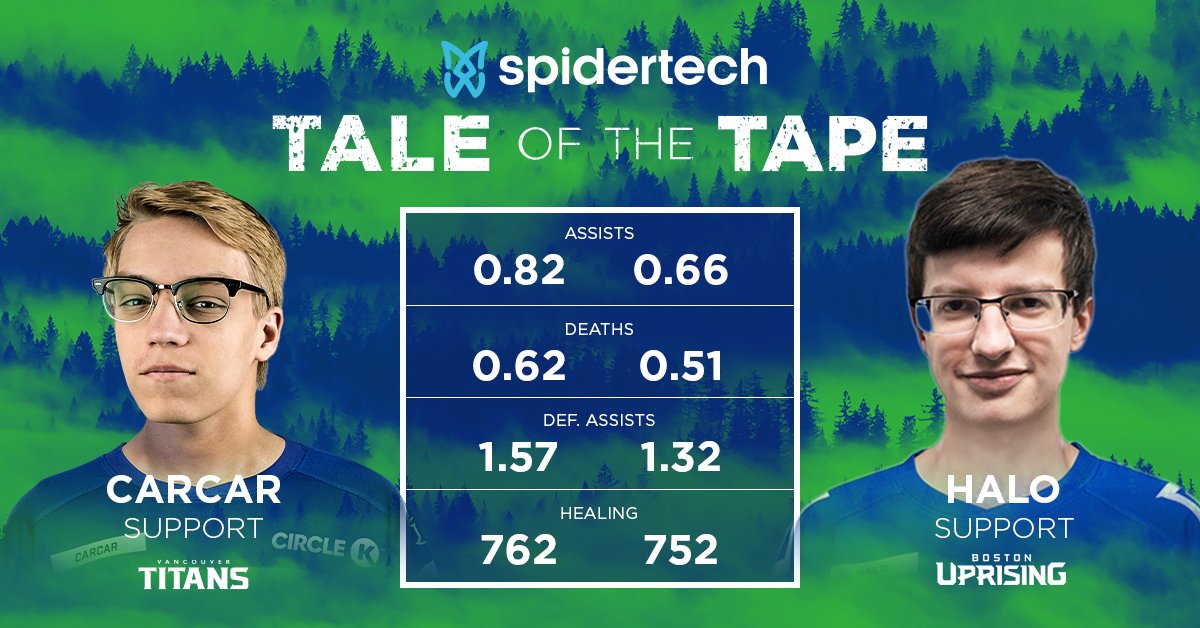 We need a healthy refresh with how we look at teams that underperform. You can have good, even great players on mediocre teams. You don’t have to look all that hard to find instances of players seemingly “coming out of nowhere” and performing well when their stocks are seemingly at their lowest. 2020 regular season MVP, Kim "Fleta" Byung-sun, came from an old team called Flash Lux, who quite literally struggled to earn map wins in their day. Benjamin "BenBest" Dieulafait had a massive revitalisation with the Paris Eternal this year and echoing that same return to form story is Lee "Fearless" Eui-Seok alongside the Shanghai Dragons.

Again, good players can be hidden gems on teams that struggle and the Titans have a considerable amount of those players. We cannot let the 2020 Overwatch League season, one that frankly this team was not meant to succeed in, taint our view of these contenders. Now, does that mean the Titans are going to go on another run like they did during the 2019 season? No, of course not, but a return to form for the Titans does everyone some good. Not only does this increase the stock of the players, and coaching staff, and the brand as a whole, but it helps the league more than anything. The last thing we need in the Overwatch League is another consistently underperforming bottom feeder team that can’t find its sea legs.

The 2020 Vancouver Titans were a team that had to be assembled mid-season, without much in the way of practice, and were still able to convincingly defeat teams like the Atlanta Reign, the Dallas Fuel, and the Boston Uprising and even qualified—with a bye-round—for the Summer Showdown. This team is not that far off a solid middle of the pack finish in 2021, and depending on how things settle out, they might even be in the race for a low play-in tournament seed. This core has promise, this coaching staff has a track record of success, and if all things stay the course, the Titans could be looking at a massive uptick in results heading into 2021.